What strikes me is how innocent it all was. If we drank Mateus Rose, the bottles were turned into lampshades.

Few ventured far for their holidays. Weymouth, Margate and Bridlington had yet to be eclipsed by the Balearics.

Eating out meant scampi and chips in a basket, an egg burger at a Wimpy with the squeezy, tomato-shaped ketchup dispenser and somehow cake tasted different when it was called Black Forest Gateau at a Berni Inn.

I’m talking, of course, about 1978, the year a new study tells us was the most miserable for two centuries. Professors at Warwick University seem to base their findings on the fact that dwindling post-war euphoria had finally given up the ghost in the Winter of Discontent with its strikes and piles of rubbish.

Dallas began in 1978 (pictured: A promotional still from the American television series ‘Dallas’ shows members of the Ewing family)

What rot! 1978 was beyond question the greatest year of my life, and not only because I passed my A-levels and went off to university, for free, on a full grant.

In 1978 I was 18. My friends were all 18 that year, too, and there were dozens of birthday parties, held in the British Legion Hall, Bassaleg, in South Wales, washed down with Watneys Party Sevens — the tins holding seven pints that you opened in fear because you always got sprayed with beer.

When I describe 1978 to my children, they think I may as well be talking about 1878. (As it happens, that’s around the time the research profs say we were happiest in the UK — despite the child cruelty, gruesome mortality rates, bone-chilling poverty and an absence of any cure for gout). 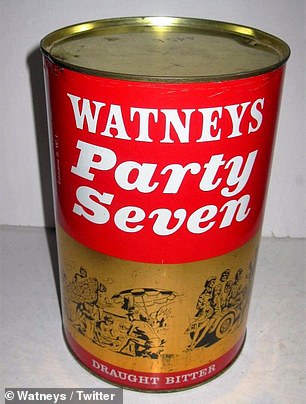 In 1978 I was 18. My friends were all 18 that year, too, and there were dozens of birthday parties, held in the British Legion Hall, Bassaleg, in South Wales, washed down with Watneys Party Sevens

It is impossible now to conceive of a society without mobile phones, computers or the internet. In 1978, we had to look things up in encyclopaedias in libraries. We communicated not instantaneously with texts and tweets. We wrote letters, went out and bought stamps; we exchanged postcards.

People of my generation were not put under pressure from infancy to pass exams. Teenagers weren’t on medication for stress. Teachers weren’t worn to a frazzle with league-table nonsense, they were brilliant people — to whom I owe so much — with proper degrees from real universities.

They wore gowns and introduced us to things that had nothing to do with any syllabus — the films of Orson Welles and Fellini, Salvador Dali, Swedish chamber music. And I went to a comprehensive in Newport — very far away from the benefits of private education.

Children had childhoods. Everything was less competitive. We all watched Crackerjack!, Blue Peter and Magpie, which were very wholesome. I still have the Blue Peter annuals, the hardbacks issued at Christmas, with step-by-step instructions on the deployment of sticky-back plastic.

I remember Valerie Singleton in the early Seventies dressed up as a Bronte to show us around Haworth Parsonage. 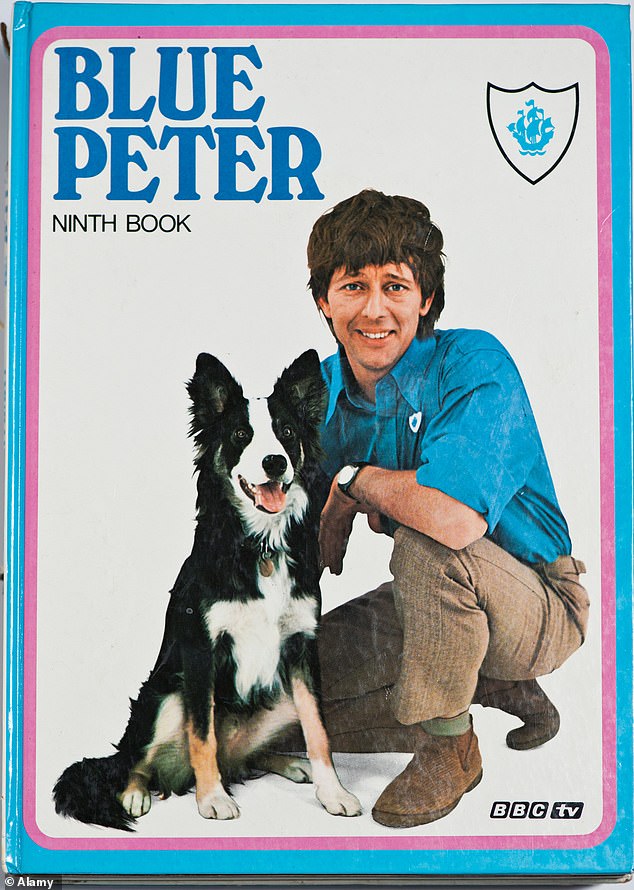 I still have the Blue Peter annuals, the hardbacks issued at Christmas, with step-by-step instructions on the deployment of sticky-back plastic (pictured: John Noakes and Shep on the cover of Blue Peter annual. Right:

There was no loudness and brash silliness, as today on CBeebies. There was an assumption that the audience was intelligent and curious, before the medium was wrecked in the modish name of accessibility and inclusiveness.

There was, however, foolhardiness. John Noakes climbed Nelson’s Column without a harness, nor did the BBC pay any life or accident insurance premium. 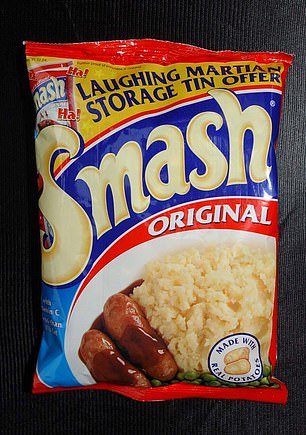 Smash, the dehydrated potato mixture and those weird robots (‘For Mash Get Smash’)

People owned only one telly and there weren’t any video recorders, so the nation watched the same programmes at the same time. This made for a sort of social, cultural cohesion, with 20.5 million people regularly watching Coronation Street and 28 million watching Morecambe And Wise at Christmas. Dallas began in 1978 and Bruce Forsyth’s Big Night starred him and wife Anthea Redfern.

The colour on TV was hit-and-miss: newsreader Kenneth Kendall was always bright orange.

We also all knew the advertising jingles. Smash, the dehydrated potato mixture and those weird robots (‘For Mash Get Smash’); Nimble Bread, with its blonde who ‘flies like a bird in the sky’ in her balloon. And Cadbury’s Flake, with the lass in the field behaving saucily in slow-motion (‘Only the crumbliest, flakiest chocolate’).

It was still the age of sauciness, titillation, suggestiveness, embodied on screen by beautiful angelic blondes such as Judy Geeson, Susan Penhaligon and Judi Bowker, without a great deal of actual mucky action. 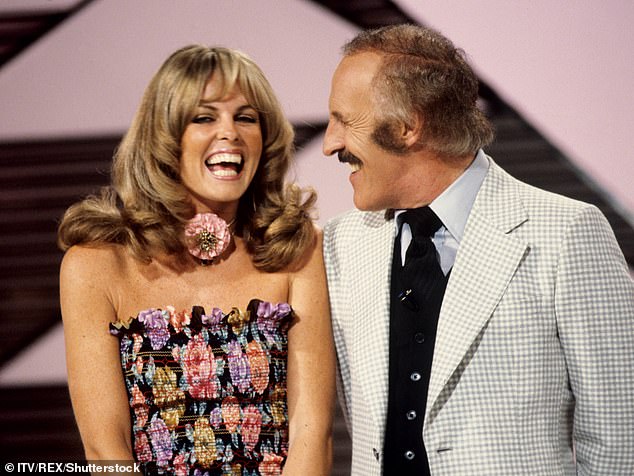 What strikes me is how innocent it all was. Bruce Forsyth’s Big Night starred him and wife Anthea Redfern

When I stayed with my future wife Anna, for example, at her parents’ house, it was definitely separate rooms. I returned to Wales a few days early, so my father laughed and said: ‘Her old man sprinkled tin tacks on the landing, did he?’

He had indeed, more or less, and was on the alert for creaky floorboards. Very Victorian.

Cohabitation was unheard of — hard to credit now, but prudery prevailed with our parents’ generation. Engaged couples were expected to remain apart until after their wedding, as in Victoria Wood’s play, Happy Since I Met You, where Julie Walters and Duncan Preston shock their families by getting a flat. 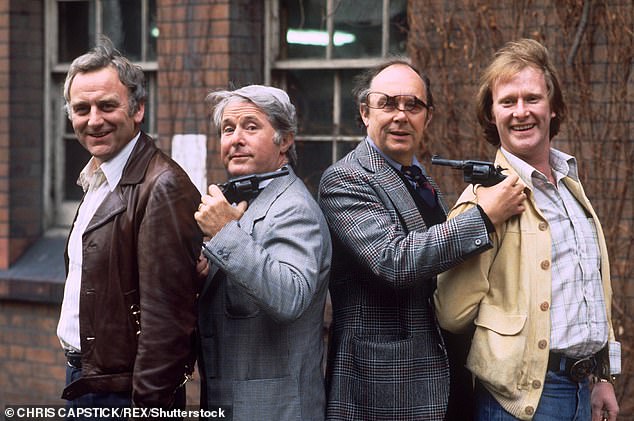 When Anna’s folks came to see us at university, we had to temporarily rent another flat, down the road, to keep up the pretence that we weren’t together.

It is no wonder a great deal of the popular culture of the Sixties and Seventies was about sexual frustration. Benny Hill ogled the ‘birds’ (as they were cheerfully called) and they angrily chased him off.

Bob and Terry, the characters in Whatever Happened To The Likely Lads?, sit in the pub lamenting their love life. Harold Steptoe is always romantically thwarted.

In Rising Damp, Rigsby — the creepy landlord who is as prepossessing as John Christie, the serial killer in 10 Rillington Place — spies through the keyholes on Richard Beckinsale and Frances de la Tour. Frankie Howerd in Up Pompeii! is surrounded by slave girls with big boobs — but the concealed joke there is that big boobs were never going to be Frankie’s cup of tea. 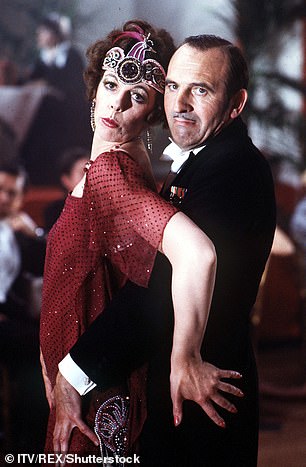 If we were pre-Aids in 1978, it’s fairer to say we were mostly pre-gay, too, particularly in Wales, where the chapel prevailed. Same-sex marriages and civil partnerships were inconceivable notions. Homophobia was rampant.

For despite the sneers, the Seventies were actually the heyday of camp. Quentin Crisp, The Naked Civil Servant, was turning from a pariah into a national hero, and David Bowie, Ziggy Stardust himself, was covered in glitter and feathers — and my rugby-playing pals all loved it.

If our fashion decisions were embarrassing and garish — blue velvet flared trousers, platform shoes, chiffon scarves, tank tops, mullet haircuts — at least we didn’t go around in collar and tie like our buttoned-up fathers.

Nevertheless, blame for our prattish attire may be put on the pop groups who were all the rage, whom everyone aped: Mud, Wizzard, Slade, Showaddywaddy.

I did like going into town on a Saturday and looking at records (what today’s youngsters call ‘vinyls’) with the bright pop-art album covers — Mott the Hoople, Blondie, The Stranglers, Buzzcocks, Jethro Tull. Today, with everything available all at once on a smartphone, there’s another ritual gone.

In the afternoon we’d go as a gang to the Odeon to see Grease, released in 1978 with John Travolta and Olivia Neutron Bomb; Animal House, with the great John Belushi; or Superman, with its primitive special effects. 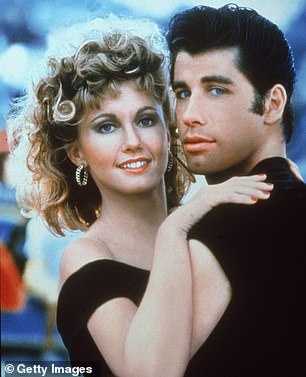 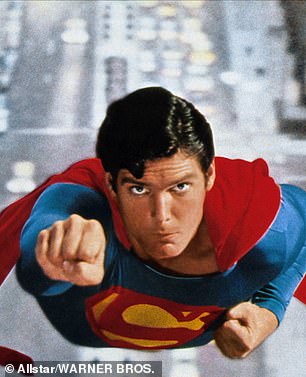 In the afternoon we’d go as a gang to the Odeon to see Grease, released in 1978 with John Travolta and Olivia Neutron Bomb; Animal House, with the great John Belushi; or Superman, with its primitive special effects

If I make it seem as if 1978 was all TV, listening to borrowed LPs in friends’ bedrooms, surreptitious snogs and going about like well-behaved hippies, that is because, for me, it was. I was unaware of the wider world.

Jimmy Carter was in the White House and James Callaghan was in Downing Street. Beyond that nothing impinged. There were loads of industrial strikes, the trades unions were in uproar, but the Winter of Discontent simply passed me by.

On the horizon, though I never knew it, was Margaret Thatcher, privatisation, free enterprise, self-reliance — having to be a grown-up, taking my place in society.

That’s when things changed. But in 1978 we were blessed with innocence and remained in blissful ignorance — and we had a ball. I think my platform shoes are still in the loft. But I no longer fit into my flares.