By Monica Greep For Mailonline

Lorraine viewers dubbed an actor with a genetic disorder an ‘inspiration’ after he called for education about online bullying to be added to the British National Curriculum today.

Adam Pearson, 34, from Brighton, who has Neurofibromatosis – a disorder that causes tumors to form on nerve tissue – admitted he has been a victim of ‘childhood bullying’ and abuse on social media.

Appearing on the ITV morning talk show, the disability activist revealed that although he is no longer affected by cruel comments, he wants people to learn from a young age that it ‘doesn’t matter’ what trolls say about them.

‘I think we need to put things like media literacy on the National Curriculum to encourage young people that it doesn’t matter.’

Adam Pearson, 34, from Brighton (pictured), who has Neurofibromatosia, appeared on Lorraine today where he called for education about online bullying to be added to the British National Curriculum

Adam was praised by viewers of the show, with one hailing him a ‘brilliant man’ and another dubbing him an ‘inspiration’.

‘Couldn’t have said it better. What a brilliant man.’ enthused one viewer, while another penned: ‘Adam, you’re such an inspiration to the world just keep on doing what you’re doing – I salute you. Don’t change for anyone your such an amazing person.’

A third added: ‘Adam is a true inspiration. I have NF1 he is amazing and gives me courage.’

Speaking with presenter Lorraine, the journalist, who has been involved in several outreach programmes to prevent bullying associated with deformities, insisted that even if he was able to get rid of his disability, he would choose to keep his condition as it has ‘made him who he is.’

Adam was praised by viewers who tuned in to the show. One hailed him a ‘brilliant man’ while another branded him an ‘inspiration’

‘It’s made me who I am it’s opened more doors than I think its closed,’ he explained. ‘I’m not going to pretend it’s easy – 37 surgeries at 34-years-old, childhood bullying, social media.

He went on to tease that he gets his own back on trolls by screenshotting their spelling mistakes and correcting their grammar.

‘I’m a big fan of, I never retweet, I screenshot,’ he said. ‘Because if you retweet you give them the attention they want, and then you correct the grammar and move on.’

And throughout the duration of his interview and after, viewers continued to praise Adam on social media.

Neurofibromatosis is the name of a group of conditions that cause lumps to grow on the coverings of nerves.

NF is caused by a mutation in one of the genes. About half of the people who have NF have no family history of the condition.

This is called a spontaneous gene mutation. The other half of people will have inherited NF from their mother or father.

Some sufferers are affected by neurofibromas, which usually appear during adolescence.

These may first appear on the skin as a purplish mark, before a small fibrous lump appears.

They can also grow along deeper-seated nerves inside the body, which can be painful if knocked.

The lumps can increase in number during a person’s lifetime.

NF has also been linked to an increased risk of stroke if growths develop on nerve cells in the brain and cut off the organ’s blood supply.

There is no treatment to stop the lumps from appearing, although surgery or laser treatment can sometimes be used to remove them.

‘What a great maxim to live by,’ commented one, while a further wrote: ‘So well said @Adam_Pearson. We can all learn from you.’

He went on to reveal that his condition is a ‘spectrum’ which affect those who have it in several different ways.

‘With this condition there’s no one size fits all,’ he explained. ‘It’s a massive spectrum and I’m on the more severe end.’

‘My mother always taught us to believe that nothing is the end of the world and once you find something that’s more challenging you learn how to work round it and step up to the challenge.’ 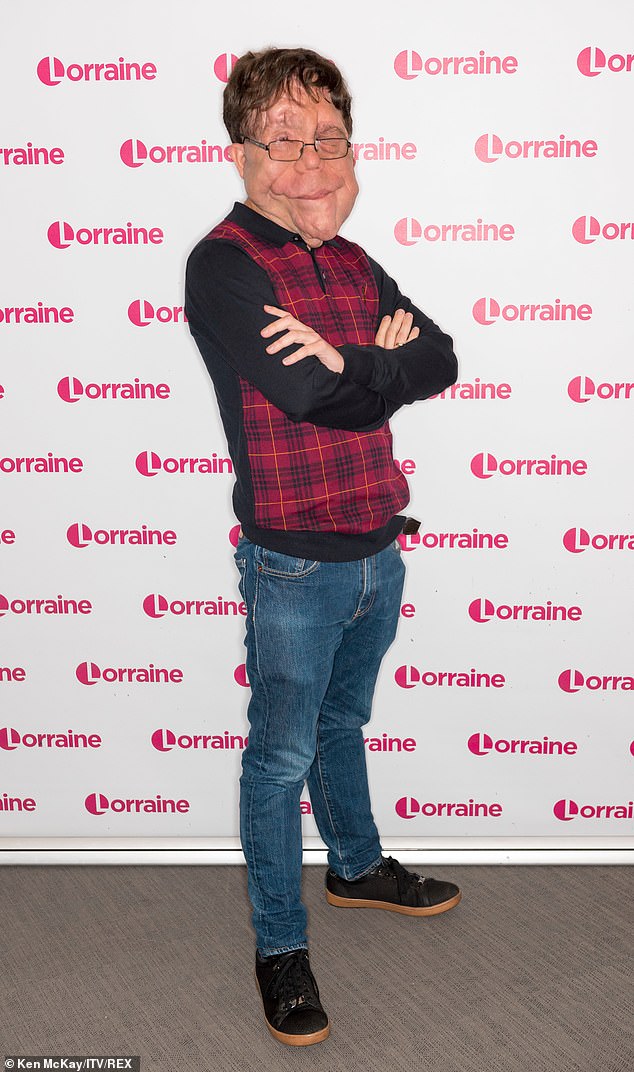 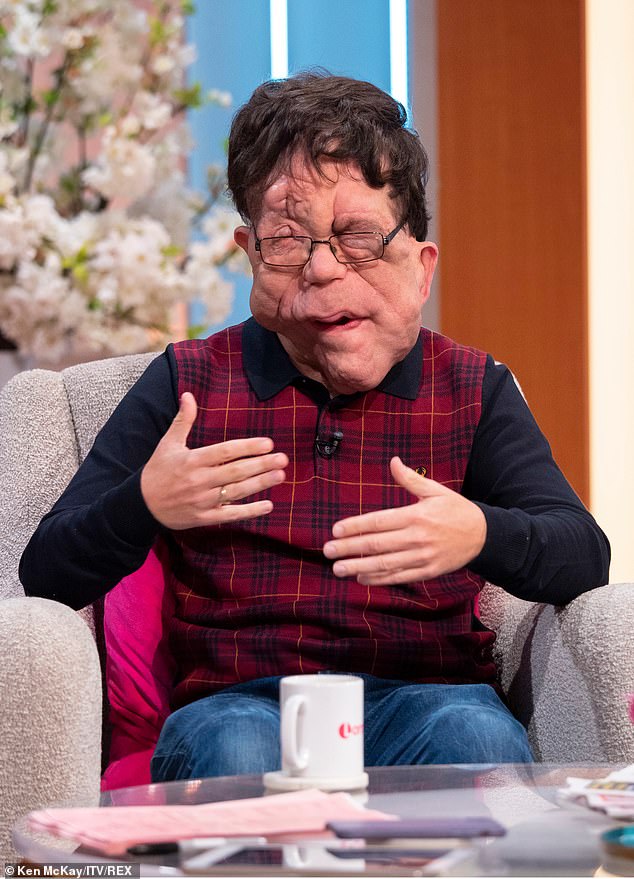 Adam (pictured on today’s show) insisted that even if he was able to get rid of his disability, he would choose to keep his condition as it has ‘made him who he is’

Viewers continued to praise Adam on social media. One called him ‘brilliant’ while a second said he ‘gives him courage’