Amanda Holden has detailed her desperate battle to swim back to shore after breaking her leg in two places during day one of her idyllic family getaway.

Speaking on her HEART FM on Tuesday, the radio presenter, 48, revealed that she was forced to ‘swim back to shore one legged’ after falling into the sea when her casual showing off on an assault course went terribly wrong.

Despite admitting that she initially wasn’t too pleased about having to wear a life jacket, Amanda went on to reveal that the safety gear actually saved her life because it helped her get back to safety quickly.

‘Swam back one legged’: Amanda Holden, 48, has detailed her desperate battle to swim back to shore after breaking her leg in two places during day one of her idyllic family getaway

The beauty also explained that she could’ve drowned during her struggle back to safety.

She continued: ‘The irony is is you know how much I hate health and safety and a guy that was running the thing said “you have to wear the life jacket”.

‘I was thinking well this is silly, it’s a children’s thing so I was like “ugh alright then” and I put on the life jacket I’m really glad I did to be honest because I don’t think I would have made it back as hastily as I did.’ 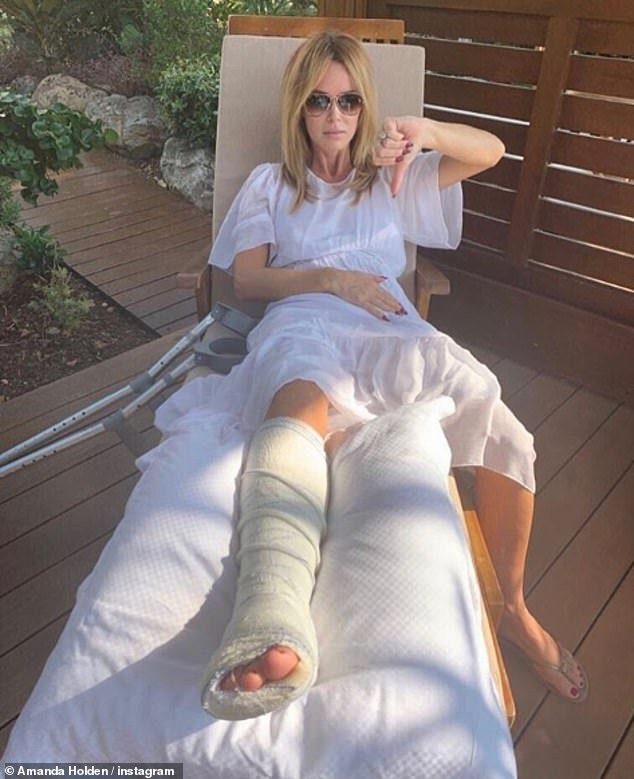 ‘Wouldn’t have made it back’: Despite admitting that she initially wasn’t too pleased about having to wear a life jacket, Amanda revealed that the safety gear actually saved her life

This comes after Amanda revealed she is ‘totally gutted’ after breaking her leg in two places while ‘showing off’ on an inflatable assault course on day one of her family holiday.

Amanda said on her radio show: ‘I’ve broken my fibula in two places and I was rushed to hospital. I’ve got a metal plate and screws in my leg which currently is the fastest and easiest way for it to heal.’

She also shared an Instagram snap of her leg in plaster earlier that day, giving a big thumbs down and wrote that she was ‘heartbroken.’

The BGT host had to undergo emergency surgery and have a metal plate fitted after it was revealed that she had snapped her fibula in two places.

She phoned in and told co-host Jamie Theakston, 48: ‘I just can’t believe what’s happened… on the first day here as well so I’m just totally gutted.

‘Basically I was trying to be a good mother… and I said to Hollie “Mummy can come on that with you” and there’s this like, you remember [Total] Wipeout, that TV thing?

‘There’s like a children’s Total Wipeout thing in the middle of the sea… I walked around it and then crawled across like an old person, like across the difficult bits. 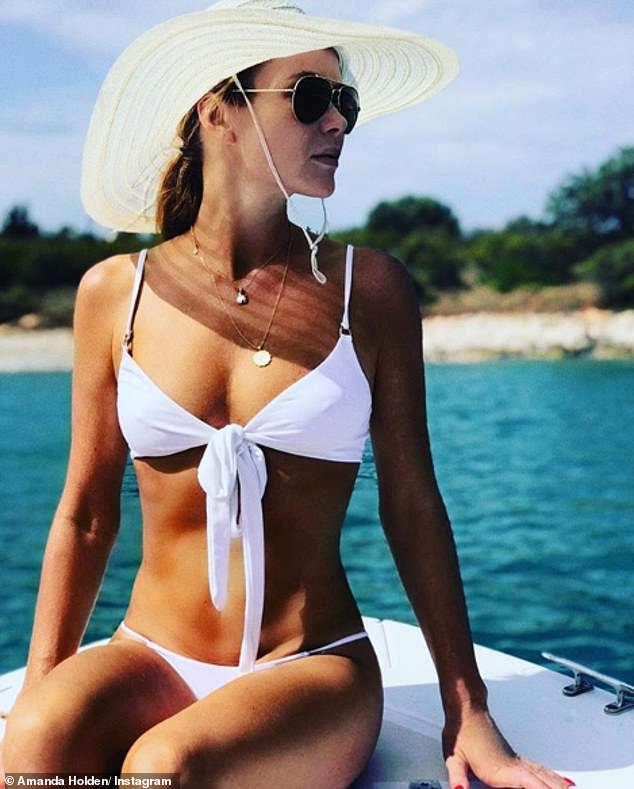 Bad luck: The BGT host admitted she was ‘showing off’ and has had to undergo emergency surgery and have a metal plate fitted after breaking her leg in two places 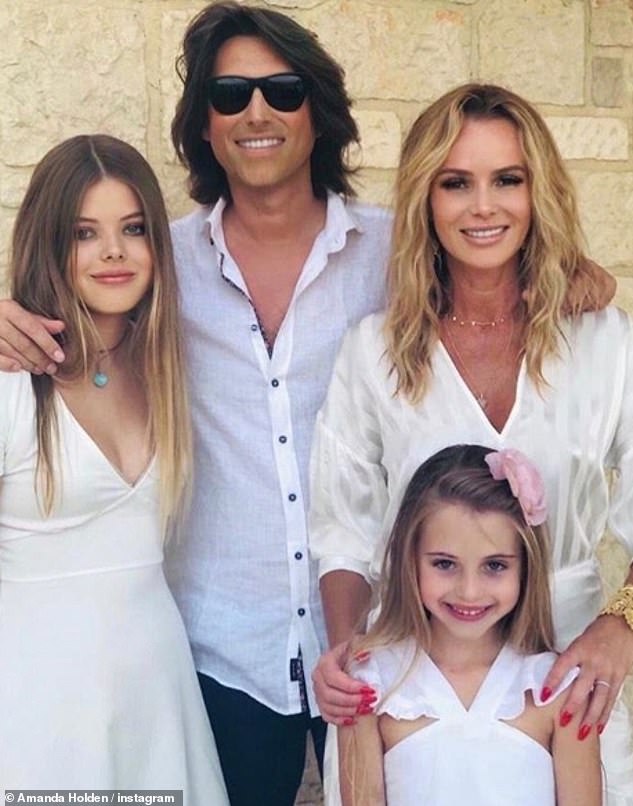 Family: Amanda was with her daughters Alexa, 13, and Hollie, seven and husband Chris Hughes when she snapped her fibula in two places and had to be rushed to a local hospital

‘And then there were these three inflatable stepping stones in the middle of the sea and everyone else was running across it and I thought “oh I could do that, if kids can do it I can do it” and I did it and I made it.’

Holding her hands up, she said: ‘I was showing off Jamie – I made it across to the other side and then my leg slipped coz obviously its wet and it went the other way and I felt it break.

‘I was rushed to hospital and I’ve got a metal plate and screws in my leg which currently is the fastest and easiest way for it to heal. I haven’t got a cast I’ve got like metal in my leg and a splint and it’s all wrapped up and it’s got a heartbeat in it.’

Jamie asked her if she is mobile and she said: ‘I am on crutches and I am in a wheelchair and Chris bless him has pushed me to dinner every night in a wheelchair.’ 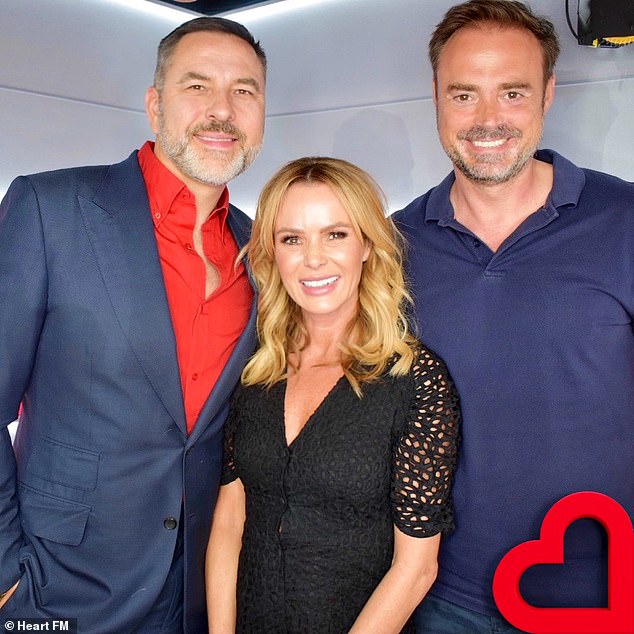 Have some heart: Amanda called in from her holiday to tell Jamie Theakston (right) exactly what had happened

Amanda was with daughters Alexa, 13, and Hollie, seven, and husband Chris Hughes when the incident occured.

Amanda also told MailOnline earlier: ‘Sadly this is true. I suffered a nasty accident while playing in the sea with the family during our half-term holiday and subsequently broke my leg in two places.

‘I had an operation on Friday and a metal plate was fitted.’

A spokesperson for Amanda added: ‘Despite this painful accident it’s business as usual for Amanda and she will return to Heart Breakfast on Monday October 28.’

The Sun wrote about the incident and said: ‘She needed an emergency operation to have a metal plate fitted.

‘The star was playing in the sea off a beach in Europe with her daughters. She slipped and snapped her fibula in two places.’

But it was her youngest daughter Hollie, who stole the show when she interviewed Hollywood A-listers Angelina Jolie and Elle Fanning recently.

Amanda said she was ‘worried for her job’ as Hollie made her interview debut with the Maleficent: Mistress of Evil stars.

The presenter shared a sweet group snap of herself and Hollie posing with Angelina, 44, and Elle, 21, that she captioned: ‘I’m worried for my job!! [Hollie]is a natural!’ 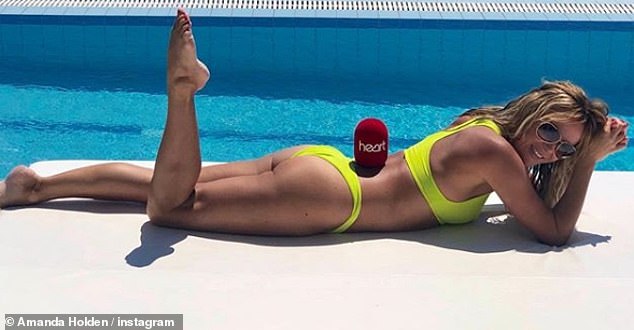 A spokesperson for Amanda added: ‘Despite this painful accident it’s business as usual for Amanda and she will return to Heart Breakfast on Monday 28th October’

Amanda said to the actresses: ‘The film is very much about family and how we don’t have to kind of be built in the same way in order to be united and again, I just think this film is so full of amazing positive messages for younger people.

‘How important is it for you to play roles that kind of, and not in a sort of heavy way, but kind of really gently give a lovely message to young people?’

Angelina responded: ‘Oh absolutely, especially when you know that a large part of the audience are young.

‘I think usually it’s the adults that need to be reminded of these messages because you guys kind of already know, but it’s really important to strengthen these messages for the young.’

Discussing her six children – of which three are adopted – she added: ‘And the message that family’s not just blood you know. Half of my children are not my blood and they are absolutely my family and my children and I love them so much.’ 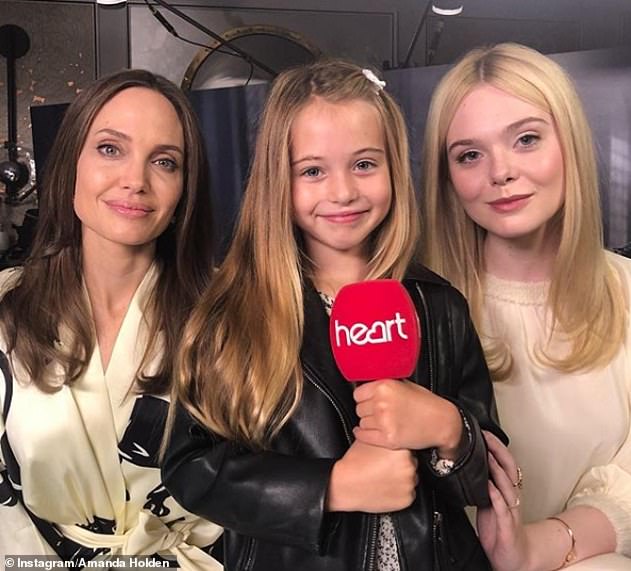 Amanda’s accident comes after she recently had an online spat with a tile company.

A furious Amanda took to Twitter to deny she’s a ‘princess’ after engaging in a spat with a tile company called Appleby’s tiles.

The radio host hit back after a representative for the company called Jack, who accused her of using her ‘celebrity status’ to get ‘special treatment’ after she asked for a refund when she was sent an incorrect box of tiles

Amanda explained that she would now be out of pocket as she already had tilers on site which she had to pay, but Appleby’s tiles refused to give her the tiles for free by way of compensation.

They wrote to her: ‘Unfortunately that is not how it works. We will not be refunding your order however, we can refund your shipping fees.

‘Alternatively, we can refund your whole order for you and not send these out.

‘Unfortunately we do not make exceptions for ‘celebrity’ status and all of our customers are treated the same as per our terms and conditions. We will happily refund you your shipping for the inconvenience.’

MailOnline has seen the full transcript between Amanda and Appleby’s tiles (sent by Appleby’s) and it’s clear that Amanda does not use her celebrity status to get special treatment.

A spokesperson for Amanda told MailOnline: ‘She just wanted to return them and have the correct ones sent.’ 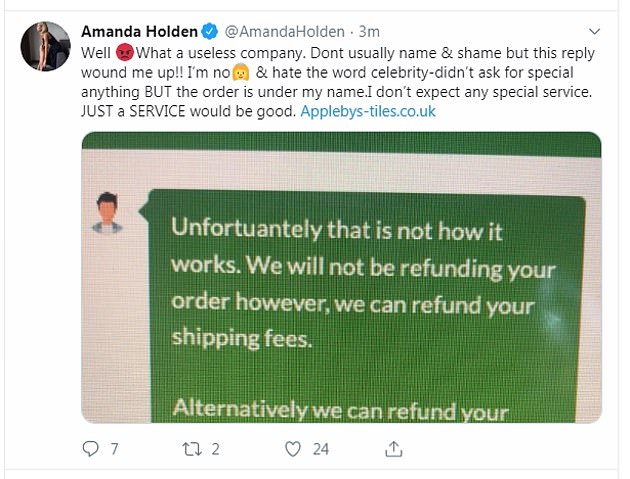 Calling them out: Amanda shared some of the exchange on Twitter – MailOnline has read the full transcript and at no point did she use her celebrity status to get special treatment 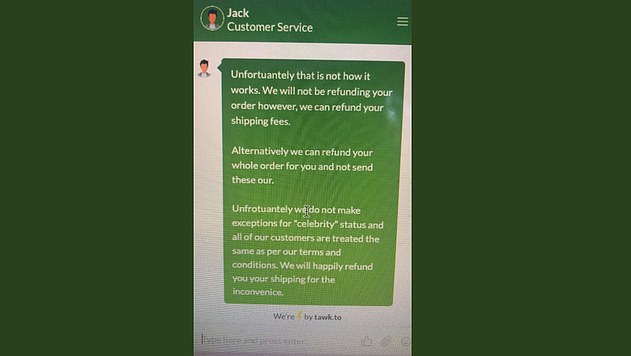 Ouch! A representative called Jack accused her of using her status to get the free tiles, but Amanda didn’t see why she should pay for the company’s mistake. Appleby’s tiles say customers should not book in builders until their tiles have been received