By Annie Palmer For Dailymail.com

The internet giant announced Wednesday that six ‘Scout’ robots will deliver packages to customers in a neighborhood in Snohomish County, Washington.

Each Scout robot is a squat, bright blue device that gets around on six wheels.

The battery-powered devices about the size of a small cooler and can deliver packages autonomously.

And city or suburban dwellers don’t have to worry about Scout running them over on the street, as Amazon says the robots ‘roll along sidewalks at a walking pace.’

It appears that there’s a door on the top of each device that users can lift open to remove their package.

It’s unclear how the robots verify the user’s identity, but other autonomous delivery robots, such as Postmates’ food delivery robot,  requires users to enter a code on the device’s touchscreen first before they can retrieve their order.

For now, Scout devices will deliver packages Monday through Friday during the daytime, Sean Scott, vice president of Amazon Scout, wrote in a blog spot.

‘The devices will autonomously follow their delivery route but will initially be accompanied by an Amazon employee,’ Scott explained.

Each Scout robot is a squat, bright blue device that gets around on six wheels. The all-electric devices are about the size of a small cooler and can deliver packages autonomously

‘We developed Amazon Scout at our research and development lab in Seattle, ensuring the devices can safely and efficiently navigate around pets, pedestrians and anything else in their path.’

Scott added that the company will use what it learns from the first Scout trial to ‘provide even more sustainability and convenience to customer deliveries.’

Aside from Scout, Amazon is also said to be developing delivery drones, which could also revolutionize the last-mile portion of the delivery process.

Last-mile delivery includes the process of getting a package from the warehouse or a delivery truck to your door.

WHAT ARE AMAZON’S ANTI-ROBOT TECH VESTS?

Amazon is increasingly relying on robots for some menial tasks in its warehouses, from transporting goods across short distances to stocking shelves.

Now, the internet giant has devised a system to protect employees from getting run over by any roving robots.

Employees are being fitted with ‘robotic tech vests’ that notify the machines of their whereabouts so that any potential accidents are avoided. 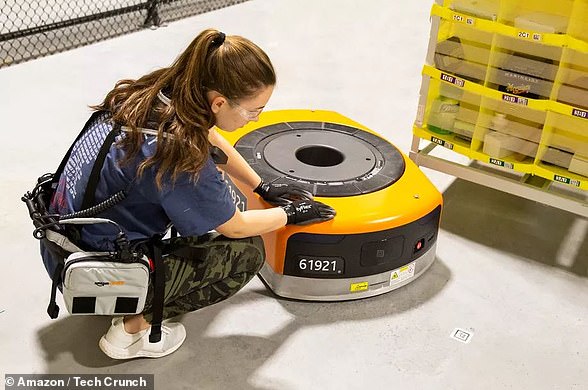 Employees are being fitted with ‘robotic tech vests’ that notify robots of their whereabouts. They’re designed by Amazon Robotics and worn like a pair of suspenders attached to a belt

Over the course of the past year, workers in more than 25 fulfillment centers have been able to use the vests.

The vests were designed by Amazon Robotics and are worn like a pair of suspenders that are attached to a belt.

The device is packed with sensors that communicate with nearby robots, alerting them to an employee’s location so that they don’t crash into them.

Amazon isn’t the only tech giant developing delivery drones, however.

Postmates unveiled its ‘Serve’ robot last December, which is meant for food deliveries, can carry a payload of up to 50lbs and can travel up to 30 miles on a single charge.

Starship Technologies’ slow-moving delivery bots have already been trialed across the world, including in Hamburg, Washington and California, delivering everything from groceries to takeout pizza.

They have travelled more than 100,000 miles in testing mode in more than 100 cities in 20 different countries.

This week, the company announced that the robots would begin delivering food to students and staff at George Mason University.