By Bhvishya Patel For Mailonline

A prankster has generated a virtual traffic jam on Google Maps by walking around with a cart full of smartphones.

Simon Weckert, from Germany, decided to trick the web mapping service by walking through the streets of Berlin with 99 smartphones all connected to the Google app for driving directions.

The artist found that he was able to trick the technology system into thinking there was a severe traffic jam and saw the interactive map tell its user to avoid the city’s busy streets.

In a video uploaded to YouTube the artist is seen dragging a cart of smartphones through the country’s capital.

Simon Weckert, from Germany, decided to trick the web mapping service Google Maps by walking through the streets of Berlin with 99 smartphones 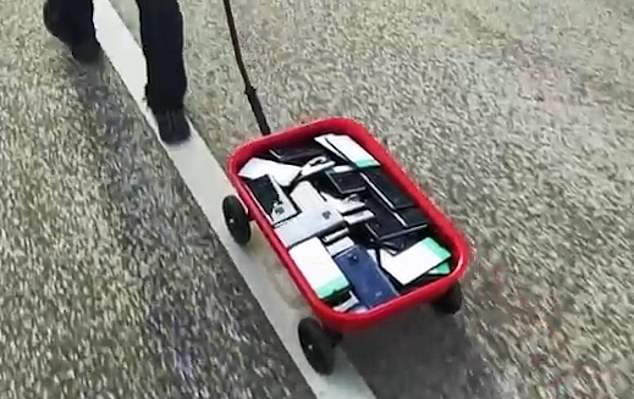 The smartphones, which were pulled around in a cart, were all connected to the Google app for driving directions

The colour of the roads soon turn from green to red on the google service as the prankster tricks it into thinking there is a traffic jam.

On his website the artist wrote that the interactive mapping service had ‘fundamentally changed our understanding of what a map is’ and how we now interacted with them.

He also said the application had ”established a position for itself’ by interacting with other apps such as Airbnb and deliveroo, thereby creating a new form of ‘digital capitalism’.

He wrote: ‘With its Geo Tools, Google has created a platform that allows users and businesses to interact with maps in a novel way. This means that questions relating to power in the discourse of cartography have to be reformulated.

‘But what is the relationship between the art of enabling and techniques of supervision, control and regulation in Google’s maps? 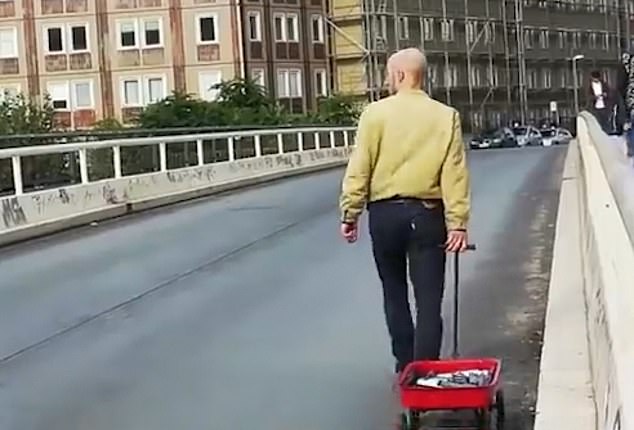 The artist, who found that he was able to trick the technology system into thinking there was a severe traffic jam, share his video on YouTube 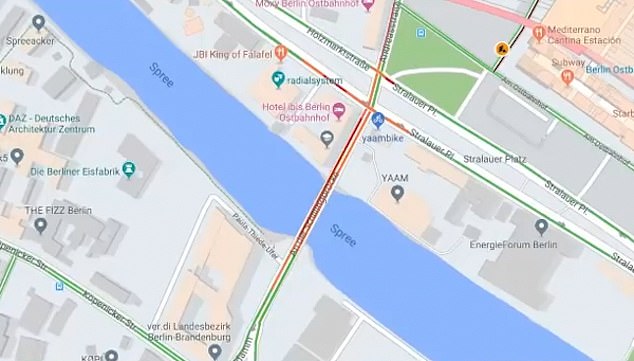 ‘Do these maps function as dispositive nets that determine the behaviour, opinions and images of living beings, exercising power and controlling knowledge?’

On February 1, Mr Weckert took to his Twitter page to share his video with his followers in a post which read: ’99 smartphones are transported in a handcart to generate virtual traffic jam in Google Maps.

‘Through this activity, it is possible to turn a green street red which has an impact in the physical world by navigating cars on another route! #googlemapshacks.’

Google maps, which allows users to access streets across the globe, is a web mapping service which offers real time traffic conditions, satellite images and panoramic views of streets.