A determined café owner refused to let a motorist who had parked on the premises for a week leave without paying for the privilege in a hilarious stand-off.

Paul Stenson, 39, from Dublin, noticed the man had parked his Audi outside the Charleville Lodge and White Moose Café from 7am to 5pm for several days despite not being a customer of either business.

The manager gave the brazen motorist a chance to pay without confrontation – leaving polite messages on his windshield and driver’s door which asked him to pay what was due – before resorting to more dramatic methods.

In the video, filmed on February 28, Mr Stenson is seen sitting inside the Phibsborough hotel as he explains the situation. 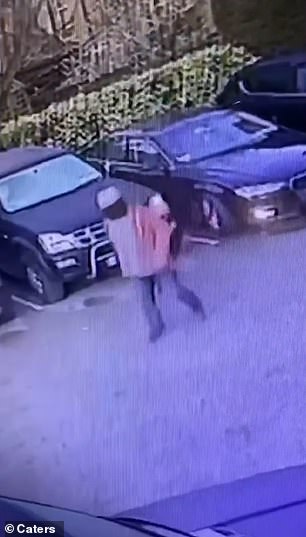 ‘We have a situation here in Charleville Lodge where we have noticed a man park in our car park for at least a week.

‘He comes in at 7.30am, leaves at 5pm and doesn’t even come near reception he thinks our car park is a free for all.’

Mr Stenson then shows CCTV footage of the man in question as he exits his vehicle on the morning of the previous Wednesday, Thursday and Friday with a mask over his face.

The clip goes on to show the man park his car in the private car park on Tuesday and Monday.

‘The man’s car is currently parked out there at the moment,’ Mr Stenson continues. ‘Rather than clamping him or blocking him in we’re going to give him the opportunity to come up and resolve it.’

‘We’re going to put a letter on his windscreen’. 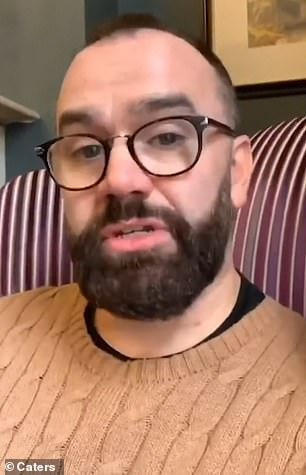 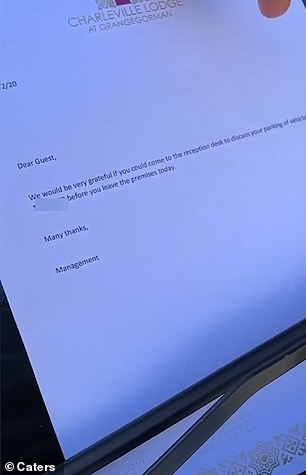 Paul Stenson (left), who runs the Charleville Lodge and White Moose Café, left a note on the motorist’s windshield (right) asking him to come to reception 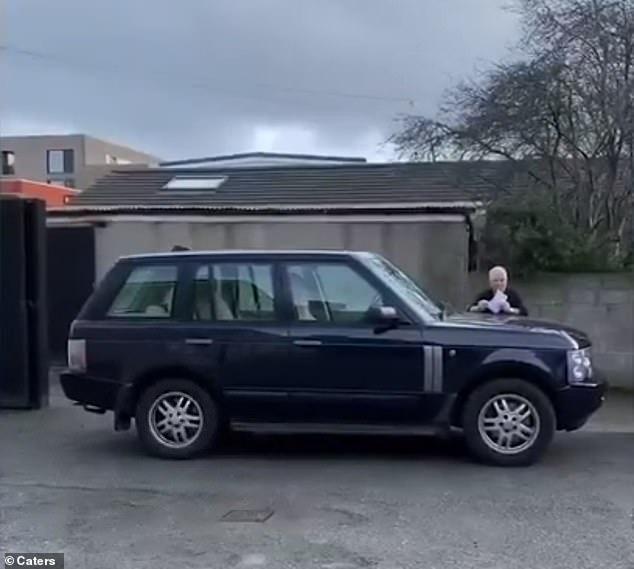 The café owner then places a note underneath the man’s windscreen wiper, which reads: ‘Dear guest, we would be very grateful if you could come to the reception desk to discuss the parking of your vehicle before you leave the premises today’.

‘When the man comes back to his car he will do one of two things,’ Mr Stenson continued. ‘He will either come to reception and pay what he owes or he will take the letter, put it in his car and drive off.’

‘If the man drives off, my Jeep will be waiting’.

Mr Stenson then explains that he will drive out in his Jeep to block the exit of the car park should the man decide not to head into the hotel to pay for his parking.

He then films the motorist as he returns to his car, and takes the note from his windshield. 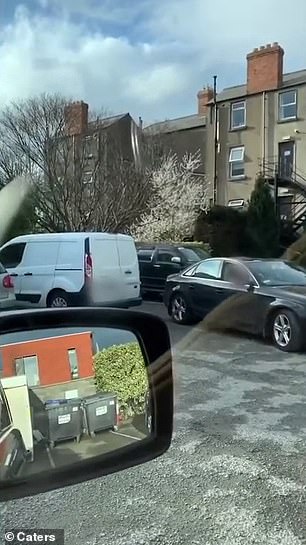 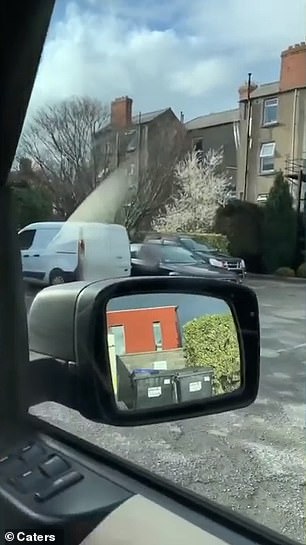 In the clip, the motorist begins to drive forward – prompting Mr Stenson to quickly block his exit 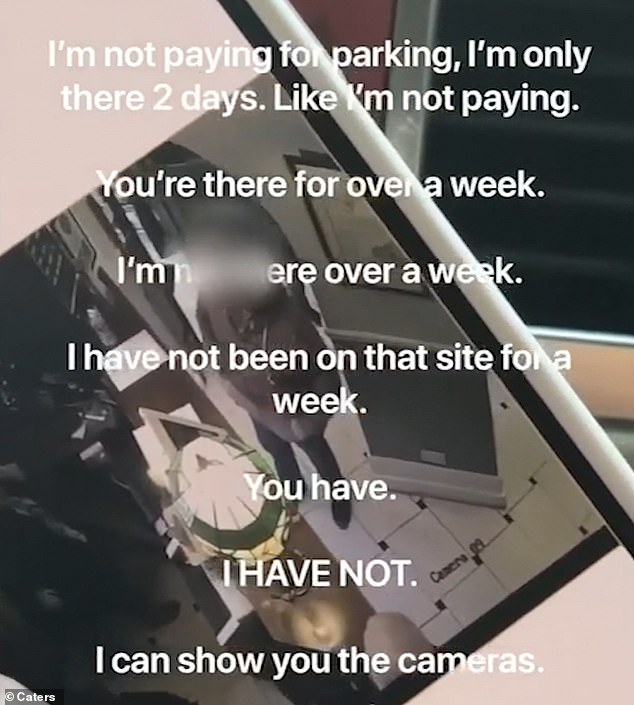 The man then backs his car into the parking space again and heads into the hotel, and Mr Stenson plays a recording of a conversation had inside the reception

The motorist then begins to drive forward – prompting Mr Stenson to quickly block his exit.

As he does, the hotel owner rolls down his window to speak to the man.

‘You might want to just pay a visit to reception if you don’t mind,’ Mr Stenson says. ‘Would you mind just going up to reception?’

The man then backs his car into the parking space again and heads into the hotel, and Mr Stenson plays an audio recording of a conversation had inside the reception.

‘Hello, you want to pay for parking?’ an employee asks the motorist.

‘I didn’t know I had to,’ he replies, before the reception worker explains there is a fee for the Charleville Lodge car park.

The motorist then explains that he wasn’t aware there was a fee for the car park. 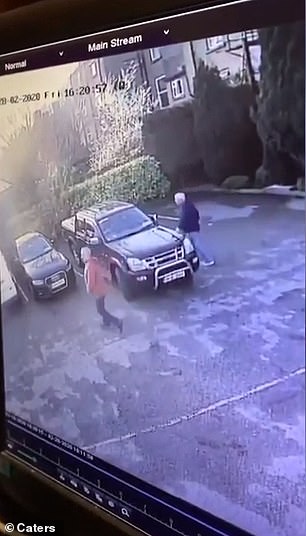 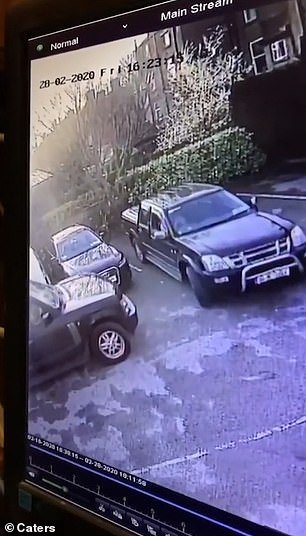 Later, the motorist was seen approaching his car again alongside a second man who is the driver of the car parked beside his

‘I didn’t see anything, I didn’t see any signs,’ he says, as Mr Stenson zooms in on a sign that reads ‘car park to be used strictly by residents only’ and another stating ‘no parking’.

The hotel owner then shows CCTV from inside the reception, where the motorist is still in conversation with the receptionist.

‘I’m not paying for parking, I’m only there two days I’m not paying,’ he said. ‘I have not been on that site for a week’.

The receptionist offers to show him security footage, to which he replies ‘I don’t care what you show me’.

Later, the motorist was seen approaching his car again alongside a second man who is the driver of the car parked beside his.

‘Then we see the man talking to another gentleman who is parked beside him’, Mr Stenson says. ‘The two gentlemen return to their vehicles as if Mr Audi will get out when we let the SUV driver out.’

‘However I don’t delay on blocking the Audi driver in while the SUV driver leaves.’

Eventually, the stubborn motorist pays for the parking and is allowed to leave the car park as the video comes to an end.