Boris Johnson faces an uphill struggle to get his Brexit deal through the Commons despite managing to hammer a last-gasp agreement with the EU after years of bitter cross-channel wrangling.

The Prime Minister is certain to use the weekend session – the first since 1982 – for a vote on his deal.

But the Parliamentary arithmetic is currently against him unless he can convince the DUP to reverse its opposition to what he has agreed or entice enough Labour rebels to defy the party whip.

So Super Saturday is shaping up to be huge? 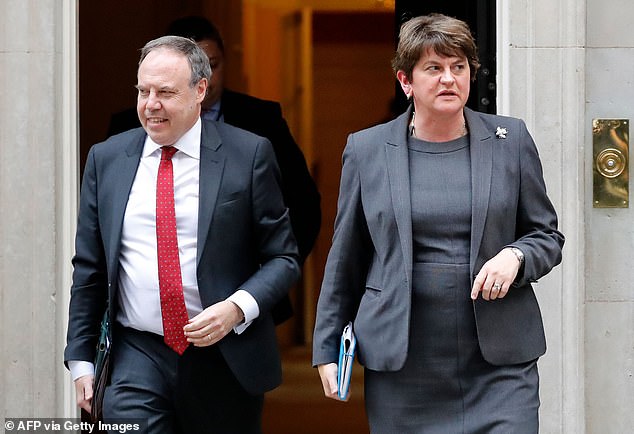 It’s going to be massive. It will potentially pitch the Prime Minister against Labour, the other opposition parties and possibly even the Democratic Unionist Party (DUP).

The latter are in a confident and supply agreement with the Tories but leader Arlene Foster remains opposed to the deal.

She announced this morning that they could not support it in its current form mainly because of concerns about the ability of the Northern Ireland Assembly to vote on supporting the complex customs plan in it.

But Mr Johnson send ahead and signed up anyway, in attempt to force the unionist party’s hand. However this was tried without success by Theresa May last year.

If the DUP refuse to vote for the deal, a hardcore of the Tory European Research Group of Brexiteer ultras will not back it either, losing the PM more votes from his own side.

Mr Johnson would then require pro-deal Labour rebels to defy what looks certain to be a three-line whip against the deal ordered by Jeremy Corbyn.

This morning he said the deal was ‘even worse’ than Theresa May’s doomed agreement today as he suggested he would fight it to the bitter end.

In addition Labour would-be rebels, mainly from Leave-supporting seats in the North of England,  have this week suggested they would not rush to back Mr Johnson.

They have been unnerved by reports this week that the government plans to ‘diverge’ from EU rules on the environment and workers’ rights after Brexit. These measures are key to winning them over.

Boris Johnson needs 319 votes to win a majority.  When MPs voted on Theresa May’s Withdrawal Agreement for the third and final time on March 29 it was defeated by 344 votes to 286, a majority of 58.

That means Mr Johnson will need to persuade approximately 30 MPs to switch from opposing a deal to voting for one.

That also assumes that none of the 286 MPs who voted for the original deal have subsequently changed their minds.

So it comes down to a straight fight between yes or no? 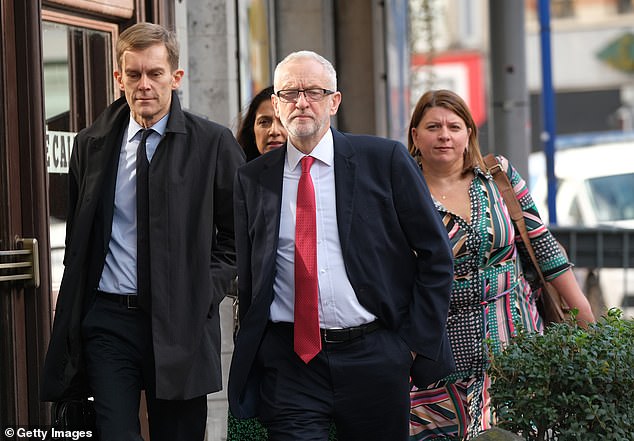 Reports today suggested that Jeremy Corbyn could whip his MPs behind the amendment as a safety net in case the main deal passes, although that has been played down by party sources 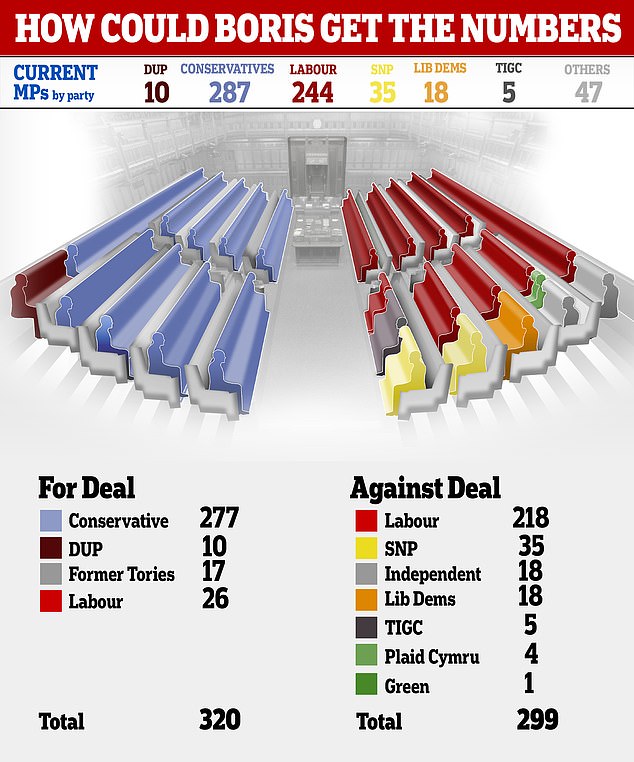 No. There are additional plans afoot designed to tie the PM’s hands.

Remain-backing MPs are expected to try to force a vote on Saturday on holding a second referendum.

The exact terms are not yet clear but it is thought that if there is a deal then they will agree to back it on the grounds that the public are then given a final say on whether to accept it.

That referendum would then likely pitch the PM’s deal against Remain.

Mr Johnson will resist any attempt to attach a second referendum to his deal and currently it is unclear whether there is a majority in Parliament in favour of a so-called ‘People’s Vote’.

Reports today suggested that Jeremy Corbyn could whip his MPs behind the amendment as a safety net in case the main deal passes, although that has been played down by party sources.

If a majority does emerge for a second referendum it will be difficult for the PM to resist given that Remain-backing MPs have repeatedly shown a willingness to seize control of the Brexit process.

Then what happens between now and Halloween if all goes to plan? 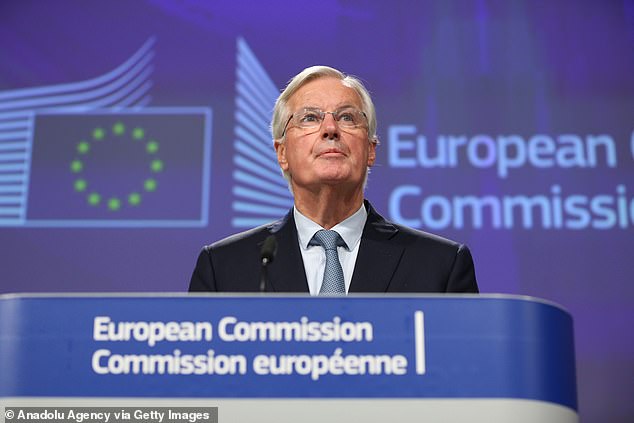 Parliament would then spend the coming week putting in place the legislation needed to actually make Brexit happen on October 31.

If Mr Johnson has a majority at the first vote on Saturday there is no reason to think that it would evaporate when it comes to voting on the Withdrawal Agreement Bill.

Once Parliament has agreed the deal it will then be up to the European Parliament to do the same.

Brexit critics have raised the prospect of trying to block the deal but if the European Commission, European Council and British Parliament have all backed it, MEPs will be under immense pressure not to scupper the process.

Assuming all of those hurdles are cleared in a timely fashion then the UK will leave the EU with a deal on October 31.

What’s the point of the EU summit Boris Johnson is heading to today if he has a deal agreed?

The Brussels summit was set to be a humiliation for the Prime Minister. Under the rebel Benn Act passed in September he was legally required to ask for a further Brexit delay past October 31 if he could not agree a deal by this Saturday.

With a deal in place that Brexit delay of three months is off the table (for now). However EU officials have already suggested that there is already not enough time to get the deal signed and sealed by October 31.

So a short ‘technical extension’ that provides enough time for this to happen is likely to be on the agenda for the leaders. The question will be how long it is.

Downing Street remains adamant that there must be no Brexit delay in order to preserve Mr Johnson’s ‘do or die’ pledge.

However, if the two sides are close to an orderly divorce it is unlikely that the UK would pull the plug.

Ultimately, Mr Johnson may be able to accept a short delay if that is the price of getting Brexit done in a non-chaotic manner.

Assuming the leaders of the EU’s 27 member states sign off the deal the PM will then have to present it to MPs for them to vote on.

That vote would likely take place on Saturday with the government having kept open the option of asking MPs to work at the weekend.

What happens to plans for a general election?

The timing of the general election will be determined by what happens on Saturday.

If Boris Johnson wins the Commons vote it will not take place until after Brexit happens on Halloween because there is no time.

Labour may try to bring in a vote of no confidence in the Government but it is unlikely it will succeed if he can win a Brexit vote.

However, if Mr Johnson loses the vote, he remains tied by the Benn Act to seek a Brexit delay until January.

If that happens Mr Johnon is certain to ask for an election and Labour would grant it once No Deal is scuppered.

So next week could see a fresh vote on holding a snap general election.

Mr Johnson has already tried twice to go to the country early but was thwarted by anti-No Deal MPs.

If MPs say yes then polling day would be at the end of November or the start of December.

One alternative would be for the opposition to bring forward a vote of no confidence to oust Mr Johnson and then allow Remain MPs to try to form a government of national unity.

But they have so far been so hopelessly divided that there is a risk they would not be able to do that. If no Government was formed after 14 days it would trigger an election.