Benjamin Field, who worked his way into the life of a university lecturer before killing him, has been jailed for at least 36 years

A sadistic church warden has been jailed for life for murdering a university lecturer following a gaslighting campaign of physical and mental torture.

Benjamin Field, 28, was found guilty in August of killing Peter Farquhar, 69, in order to inherit his house and money.

Detectives branded Field a psychopath and said he would have posed an ‘ongoing danger to society’ had he not been stopped.

Today he was jailed for life and ordered to serve at least 36 years behind bars at Oxford Crown Court.

Field secretly gave Mr Farquhar drugs and spiked his whisky, hoping that his eventual death at his hands would look like suicide or an accident.

It was only when the Baptist minister’s son began targeting Mr Farquhar’s neighbour, Ann Moore-Martin, in the village of Maids Moreton, Buckinghamshire, that his wicked scheme began to unravel. 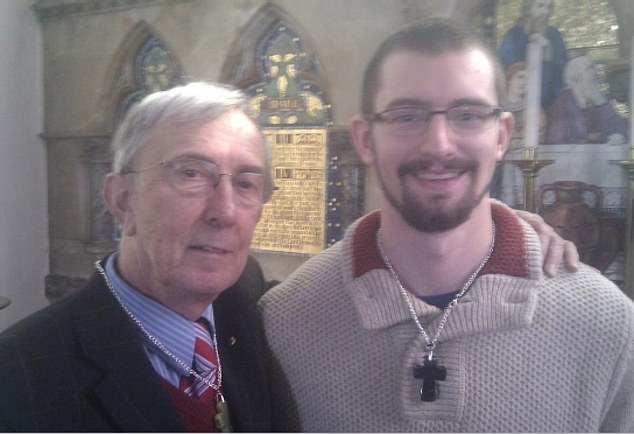 Church warden Ben Field (right) murdered Peter Farquhar (left). The pensioner, who was gay, was duped into ‘marriage’ and signed over his house to Field before he was suffocated 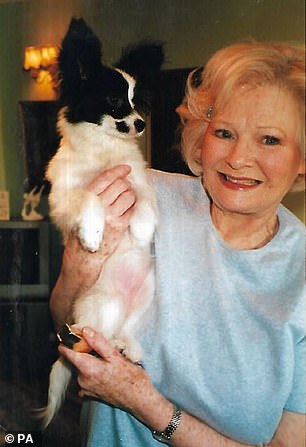 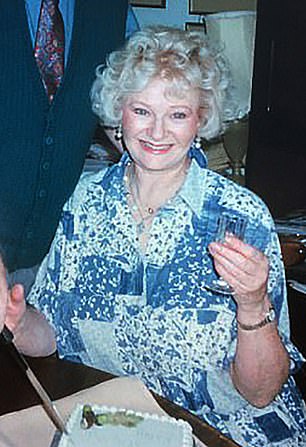 Field also admitted defrauding another victim, Ann-Moore Martin (pictured), but was cleared of conspiracy to murder the pensioner

Judge Mr Justice Sweeney told Field: ‘He [Mr Farquhar] was a committed Christian, but also gay and attracted to younger men – which was a conflict that that he had resolved through his adult life by remaining celibate.

‘He was, at his core, lonely and craving for love and affection. You realised that when, as a student, you came across him at the university in 2011 and 2012 and you decided to exploit him for your own gain.

‘Although heterosexual by inclination, indeed you had numerous girlfriends whilst you were involved with both Peter Farquhar and Anne Moore-Martin, you set about seducing him.’

The sexually promiscuous Field also gaslighted Miss Moore-Martin, a deeply religious retired headteacher, by writing messages on her mirrors purporting to be from God.

He had admitted fraudulently being in relationships with the pensioners as part of his plan to get them to change their wills.

Field accepted he had ‘psychologically manipulated’ the retired teachers but denied any involvement in their deaths. 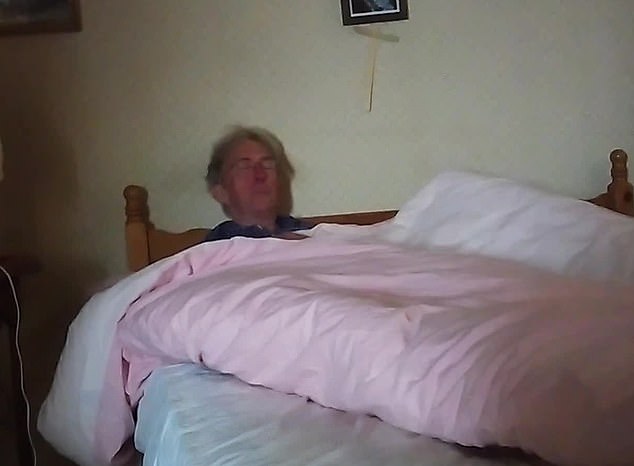 An upsetting photo shown to the jury showed Mr Farquhar laying, confused, in his bed after he was drugged and ‘gaslighted’ by his killer

Field’s parents, Baptist minister Ian and mother Beverley, were in court with his brother Tom Field. In a letter to the judge, they said he was ‘intelligent’, ‘educated’ and capable of compassionate behaviour.

Field’s barrister David Jeremy QC said: ‘He chose to apply those gifts towards the manipulation and humiliation of his victims, leading to the murder of Peter Farquhar, the degradation of Ann Moore-Martin and the causing of irreparable harms to the victims, their families and those who are close to them.

‘The real motive was to make himself feel good about himself by deceiving and debasing others by being the only one who knew what he was doing, by gaining pleasure, not by sharing as other do, but by creating a world that only he inhabited, in which he was both performer and audience – the world of interiority.

‘It would be far too simplistic to present this case as a conflict between good and evil.

‘It was a combination of circumstances that led him into a downward spiral of behaviour in which he progressively lost touch with any sense of decency or morality.’

Mr Farquhar, who was torn about his sexuality because of his religion, died in October 2015, while Miss Moore-Martin died in May 2017 from natural causes.

Prosecutors said Field had a ‘profound fascination in controlling and manipulating and humiliating and killing’ and alleged he had plotted his crimes with his friend, failed magician Martyn Smith, 33.

Field denied murdering the author and University of Buckingham lecturer and maintained Mr Farquhar could have died from taking his usual dose of flurazepam and drinking whisky but was convicted by the jury.

The University of Buckingham PhD student, of Olney, Buckinghamshire, had previously pleaded guilty to defrauding Miss Moore-Martin of £4,000 to buy a car and £27,000 for a dialysis machine.

He also admitted two burglaries and being in fraudulent relationships with Mr Farquhar and Miss Moore-Martin.

Field insisted he had acted alone and had not recruited his young brother Tom, 24, or Smith to help with the dialysis fraud.

The jury found Field not guilty of conspiracy to murder Miss Moore-Martin and the alternative charge of attempted murder.

He was also found not guilty of possession of an article for the use in fraud.

Ben Field, a seemingly-respectable churchman had tried to convince jurors that he had been unnecessarily cruel to his victim – but stopped short of murder.

He admitted his personality was ‘fundamentally flawed’ and every relationship he’d ever had, even with his own family, had been based on lies and deceit. 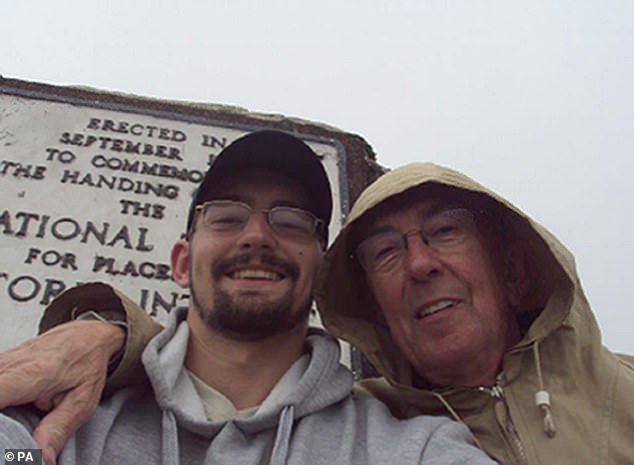 The son of a Baptist minister, Field wheedled his way into both his victims’ wills by drugging them and inflicting a form of psychological torture known as ‘gaslighting’

Those who knew Field during his schooldays growing up painted him as a loner who felt so intellectually superior that he even mocked his own teachers during lessons.

Following his conviction, former school friends of the killer shared pictures of him laughing and joking as a fresh-faced sixth former.

A former friend told MailOnline: ‘Ben looks popular in the pictures, but it was all an act. He was always a loner. He had no close group of friends and was in no cliques. He had no particular friends at all, not even a best mate.

‘We knew his parents were involved with the church but other than that nobody ever saw his family at all. He has always been so private.

‘He was a really dark character. What you saw on the surface was completely different to who he really was. He studied Maths and politics and was really intelligent, wildly intelligent, to the point where it would come across as arrogant. 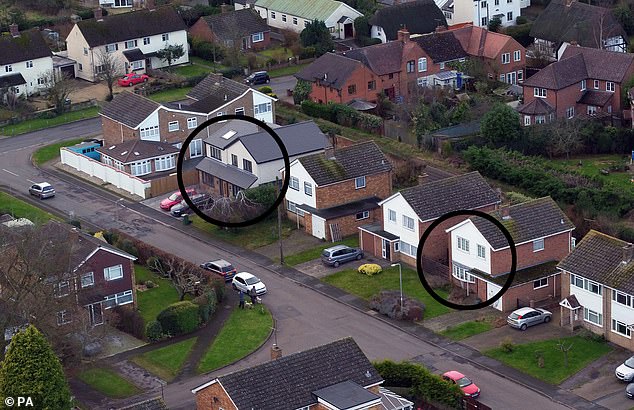 Peter Farquhar and Ann Moore-Martin lived in the same street. His house is circled on the left, hers on the right

‘He would be quite patronising to the teachers and they would berate him for his arrogance and thinking he knew better.

‘I never knew him to have a girlfriend or to be interested in girls at all. He never seemed to have a crush on anyone and wasn’t romantically linked to anybody.

‘There was no sign that he was gay either, or attracted to older women and men, as became the case when he grew up. I would describe him as asexual.’

Smith, of Redruth, Cornwall, was acquitted of murder, conspiracy to murder, possession of an article for the use in fraud, two charges of fraud and one of burglary.

Cambridge University graduate Tom Field, of Olney, Buckinghamshire, was found not guilty of a single charge of fraud.