Currency firms at airports are accused of ‘daylight robbery’ for offering rates as low as 0.81 euros

By James Salmon And Josh White For The Daily Mail

Currency firms were yesterday accused of ‘daylight robbery’ for offering rates as low as 0.81 euros to the pound at airports.

An audit of bureau de change desks revealed how firms have ruthlessly cashed in on half-term holidaymakers.

Despite a recent rebound in the value of sterling, those who wait to buy their currency until they get to the airport are typically getting less than a euro per pound.

Currency firms were yesterday accused of ‘daylight robbery’ for offering rates as low as 0.81 euros to the pound at airports

While the current exchange rate on financial markets is 1.155 euros per pound, the average offer at airports was found to be just 0.95.

The worst deal offered is at London Stansted by Moneycorp, which is owned by private equity currency firm Bridgepoint Capital.

Its customers are receiving just 0.81 euros per pound – or 405 euros in return for £500, compared to 577 euros at the current exchange rate.

To make matters worse, those ordering less than £400 also have to pay a £4.99 ‘collection fee’, eating further into their holiday spending money. Moneycorp is also responsible for the next worst deal – 0.94 euros per pound at Bristol airport.

The business model has enriched the firm’s boss Mark Horgan, who lives in a £2.25million home with an outdoor swimming pool near Maidenhead in Berkshire.

Holidaymakers flying from Heathrow are offered just 0.96 euros by Travelex at Terminal 3, according to the analysis.

At Birmingham Airport, currency company ICE offers just 0.96 euros. Even the best rate on offer – also from ICE – is just above a euro per pound (1.02 euros), at Belfast airport.

One consumer campaigner last night warned that those who wait until they get to the airport are almost guaranteed to be ‘ripped off’. 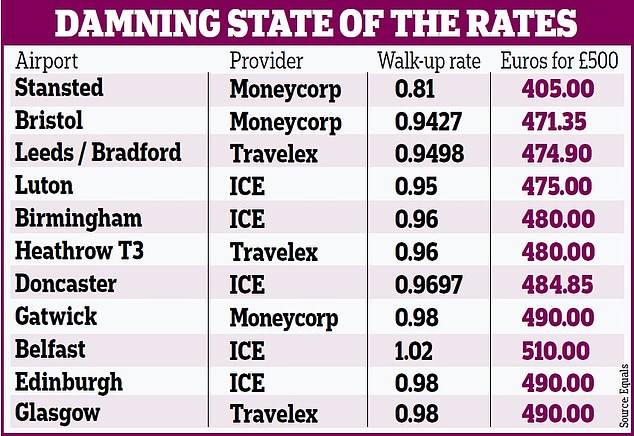 Guy Anker of the MoneySavingExpert website advised travellers to compare rates online or use a ‘specialist overseas credit or debit card’ instead.

Tory MP Julian Knight said: ‘Some of these rates are daylight robbery… currency firms, airports and everybody involved needs to take a long hard look at themselves and ask whether they are treating customers fairly. These rates suggest they are definitely not.’

Ian Strafford-Taylor, chief executive of online currency firm Equals, which carried out the analysis, said: ‘Despite the fact the pound has gained strength against the euro recently, desks at airports continue to rip off holidaymakers who are waiting until the last minute to change their currency.’

He added: ‘Of course everyone expects to pay a little more for convenience, but some of the rates offered to travellers are outrageous.’

Currency firms last night said airports are partly to blame for the poor rates, as they sign exclusive deals to set up bureau de change desks in terminals.

Moneycorp said the higher costs associated with operating at some airports are passed on to customers in the form of worse exchange rates.

A Travelex spokesman said their rates reflect a ‘convenient, reliable service’ and added that passengers are ‘encouraged to pre-order currency’.

A spokesman for Stansted said what firms charge customers ‘is a matter for them’. 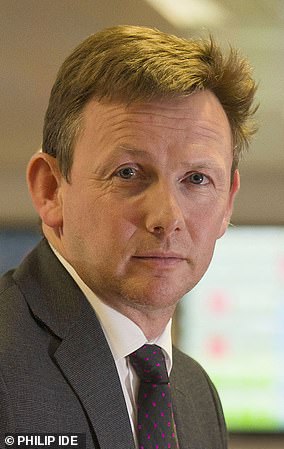 Mark Horgan (pictured) is now the boss of Moneycorp

The son of a Scottish coal miner, he has tried – and failed – to lose his broad accent by taking elocution lessons.

But little else points to the humble origins of Mark Horgan, the boss of Moneycorp, which offers airport customers some less-than-stellar exchange rates.

Chief executive of the firm since 2012, Mr Horgan 53, speaks of his working class background warmly – though it now looks to be a distant memory.

The father-of-two lives with his wife Lesley in an imposing £2.25million home, secluded on a private road in the rural outskirts of exclusive Maidenhead, Berkshire.

Mrs Horgan yesterday said her husband was at work when approached for comment in a driveway packed with cars – including two Audis.

Mr Horgan has previously bemoaned the lack of work-life balance that comes with a high-flying career, telling of his daily commutes to London.

But the Horgans manage to spend quality time together at their Spanish villa, a 3,500 sq ft behemoth on the coast in Cadiz. It reportedly boasts four huge bedrooms and a swimming pool.