A driver who smashed his car into a pub after an alcohol-fueled night ran away and left his gravely injured partner trapped in the wreckage has been spared jail.

Justin Thomas had consumed several pints of beer, amaretto and cokes as well as whiskeys at a friend’s wedding party when he got into his Vauxhall Astra and drove off at around 2am.

Leaving the event at the Ffostrasol Arms pub in Ceredigion, he lost control of the car and smashed into the wall of the Synod Inn pub.

His passenger had to be cut from the mangled car and later underwent surgery to remove a large portion of her bowels.

Swansea Crown Court heard that the pub also suffered extensive damage – but luckily was closed at the time.

Helen Randall, prosecuting, said at 2.30am the emergency services received a call from the member of public reporting a serious crash in the village of Synod Inn, some five miles away.

The court heard 35-year-old Thomas’ car was ’embedded’ in the wall of the Synod Inn pub, with a female trapped in the passenger seat.

Miss Randall said there was a strong smell of cannabis coming from the crashed Astra, and when the injured woman was asked who had been driving she replied: ‘Justin Thomas my boyfriend. I don’t know where he is.’

Justin Thomas had consumed several pints of beer, amaretto and cokes as well as whiskeys at a friend’s wedding party when he got into his Vauxhall Astra and drove off at around 2am

Thomas’ wallet was subsequently found in the foot well of the car.

The passenger was cut from the wreckage and taken to hospital where she spent the next two weeks.

The court heard she suffered a fractured breastbone and internal injuries in the crash, and had to undergo surgery to remove a large portion of her bowel – an operation that required the fitting of a colostomy bag.

She has been left with scarring on her stomach and chest, and is still receiving counselling to help her deal with the psychological impact of the experience.

Police tracked Thomas down in the days following the smash after his brother took him to hospital.

In an impact statement read to court, the passenger said she had been ‘left for dead’ in the wreckage and could not believe how her partner had fled the scene.

She said: ‘How he could just leave me trapped in the car is beyond belief. He didn’t even ring for help. He just thought about himself. He left me when I needed him most. 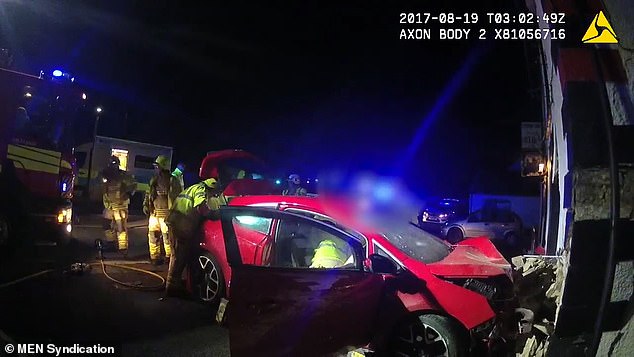 ‘My counsellor said I should forgive Justin – but I can’t and never will.’

Miss Randall said the landlady of the Synod Inn later told police she had a licence until 3am, and if the pub had been open and any customers sat in that part of the pub they could have been seriously injured.

A crash investigator later concluded Thomas had lost control on a left hand bend and mounted a grass verge and hit a road sign before crossing the carriageway and crashing into the pub wall.

The prosecutor told the judge she had asked for an explanation for the two-year delay in the case coming to court but none had been provided. 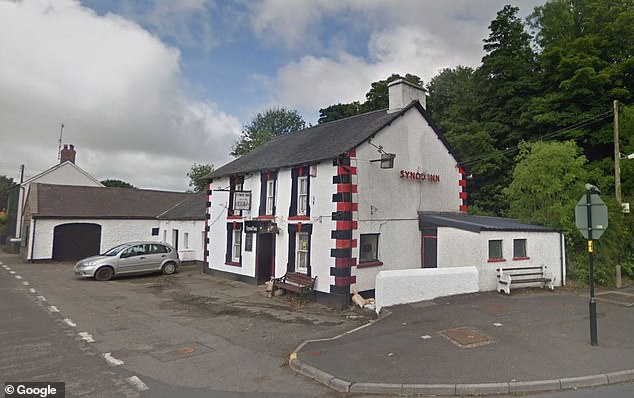 Thomas, of Derwen Gardens, Newcastle Emlyn, had previously pleaded guilty to causing serious injury by dangerous driving when he appeared in the dock for sentencing and has no previous motoring convictions.

Ian Ibrahim, defending for Thomas, said the defendant had written a letter of apology to his former partner and to the court.

He said his client had spent much of his adult life working as a mechanic but had been unable to continue in that work because of memory problems, and was now employed by a caravan firm as well as acting as a carer to his parents.

The barrister added: ‘Tragic is a word that is sometimes over-used but it was a tragedy for her [Thomas’ partner]. He is remorseful. He knows he is the author of her injuries and he apologises.’

Judge Keith Thomas told the defendant he had got behind the wheel after spending the night drinking a ‘cocktail of beer and spirits’ and, it appeared, smoking cannabis.

He told the defendant he had caused his partner serious injuries, which were still affecting her to this day, and had then run away – though he said he accepted the fact Thomas fled the scene ‘may have been a result of your injuries’.

Giving Thomas a one-third discount for his guilty plea he sentenced him to two years prison suspended for two years, banned him from driving for three years, and ordered him to complete 300 hours of unpaid work.