Boris Johnson was today accused by the DUP of breaking his Brexit promises and of being ‘weak’ during talks with the EU as the fallout between the two former allies became increasingly bitter.

The Prime Minister opted to proceed with his divorce deal with the EU last week despite the Northern Irish unionists telling him they could not support it.

The DUP’s 10 MPs have said they will vote against the agreement, making the PM’s path to victory much more difficult.

And tensions between the DUP and Mr Johnson boiled over this morning as the party’s deputy leader, Nigel Dodds, launched a vicious face-to-face attack on the premier in the House of Commons.

Mr Johnson is today asking MPs to back his divorce accord to ‘get Brexit done’ by the October 31 deadline.

But Mr Dodds urged him to go back to the drawing board as the PM launched a last ditch bid to persuade MPs to give him their support at a potential crunch vote this afternoon.

Nigel Dodds, pictured in the House of Commons this morning, suggested Boris Johnson had shown ‘weakness’ during Brexit talks with the European Union 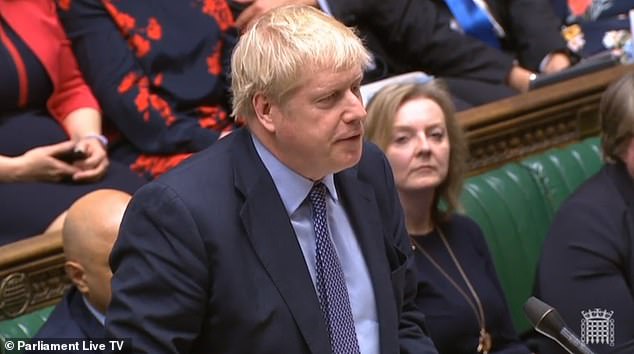 Speaking in the Commons, Mr Dodds said: ‘Weariness in this House over Brexit should not be an excuse for weakness on Brexit or weakness on the Union.

‘This party has supported respecting the right of the people of the United Kingdom’s referendum decision to leave the European Union.

‘We have supported that. We continue to support that. But it must be Brexit for the whole of the United Kingdom, leaving the single market and the customs union if that is what the rest of the UK does along with the rest of the UK.

‘This deal puts Northern Ireland, yes, in the UK customs union, but applies de facto all the European customs union code. Yes it does, read the detail.

‘It drives a coach and horses through the Belfast Agreement by altering the cross-community consent mechanism.

‘It was once said that no British Prime Minister could ever agree to such terms and indeed those who sought the leadership of the Tory Party said that at our conference.

‘Will he now abide by that and please reconsider the fact that we must leave as one nation together?

‘That is the basis on which the peace process, the political process, has advanced. He must respect that.’

The DUP is particularly concerned about the ‘democratic consent’ mechanism relating to Northern Ireland which forms part of the PM’s divorce deal.

It would give the Stormont Assembly a vote every four years on whether proposed post-Brexit border arrangements should remain in place.

That vote would be decided based on a simple majority. The DUP believe the vote should be based on needing a majority of both unionists and nationalists. 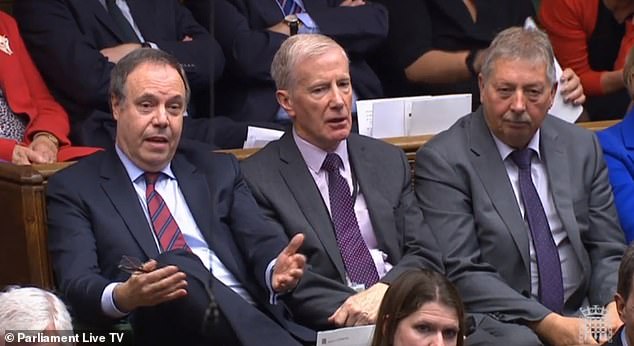 Mr Johnson’s comments prompted Mr Dodds, the deputy leader of the DUP, to raise his hands in exasperation

Mr Johnson dismissed Mr Dodds’ concerns as he defended the agreement he has struck with Brussels.

The Prime Minister’s words prompted the DUP deputy leader to raise his hands in exasperation.

‘In all frankness I do think it a pity that it is thought necessary for one side or the other in the debate in Northern Ireland to have a veto on those arrangements,’ Mr Johnson said.

‘I think that principle should be applied elsewhere and I see no reason why it should not be applied in Northern Ireland as well, and it is in full compatibility with the Good Friday Agreement.’