Welcome to the latest round of the oldest and most enduring rivalry in sport: England v Australia. After the summer rollercoaster of Ashes cricket there will surely be no fiercer clash in the Rugby World Cup than the contest in Japan tomorrow morning. RICHARD KAY brings you the novice’s guide to the battle of the giants.

England out for revenge

The two nations have met in six of the eight previous tournaments, winning three matches each. Both have lifted the Webb Ellis trophy at the other’s expense and both have enjoyed victories on their rival’s home turf.

Four years ago, host nation England crashed out of the World Cup when Australia inflicted a humiliating defeat on them at Twickenham.

Since then, England have recorded six straight victories against the Wallabies. But in tomorrow’s quarter-final clash, reputations will count for nothing.

Battle of the big mouths

The two coaches, Eddie Jones of England and Michael Cheika of Australia, are both Australian-born, but only one will have bragging rights tomorrow.

They played for the same team, Randwick in Sydney, and bonded over a shared status as ethnic interlopers in an establishment sport. Jones has a Japanese-American mother and Cheika a Lebanese father. But their rivalry has put that friendship on hold.

Oita is famous for its hot springs — the Japanese go there to soak in the waters. Strict spa admission rules forbidding customers with tattoos have been temporarily relaxed. In Japanese culture the tattoo is associated with organised crime.

The players: Fifteen per side, including eight chunky forwards (the ‘pack’, including ‘props’ and ‘flankers’) and seven ‘backs’ — the speedy runners. One of the pack is called a ‘hooker’, a reference to his skill at hooking the ball out of the scrum, and nothing else, thank you.

Try: The term for when a player touches the oval ball (a hangover from the days when it was a pig’s bladder) over the line at the opposite end of the pitch — increasingly followed, these days, by flamboyant celebrations more typical of a football match. Earns five points, plus two for a ‘conversion’ — when the ball is kicked over the bar between the posts.

Scrum: When the two packs combine into mud-caked, multi-headed monsters — and smash into each other with a loud grunt. Into this melee is flung the ball, which the hookers try to kick back to their teammates. All too often — as in life — everything collapses.

Tackle: When a player flings himself at the legs of the man running with the ball, to bring him to the ground. If someone throws you the ball and you’re immediately tackled, that’s a ‘hospital pass’. For obvious reasons.

Ruck: When a player is tackled and forwards from both sides charge furiously on top of him trying to get the ball. Closely resembles chucking-out time at an inner-city boozer.

Maul: Indistinguishable to many from a ruck — but the difference is that in a maul, one unfortunate player is holding onto the ball for dear life while somehow still standing up.

Offside: Far too complicated to explain here . . . or anywhere.

How the muscle men line up…

Dish of the day

Plays exactly the way he looks (right) — silky. Great reader of the game. The pin-up of the squad: ‘This guy is seriously handsome with a good tan, a great rig [physique] and perfect hair,’ says one teammate admiringly.

Psst: He not only drives a Porsche but is the only England player to be sponsored by the German car-maker, too.

Rampaging with ball in hand, he’s a destructive tackler. Born in Camden, London, to Nigerian parents. Educated at Harrow thanks to a sports scholarship and has a politics degree from London’s School of Oriental & African Studies. His nickname is Pearl — because he is so precious to every team he plays for. As a child, boxing not rugby was his passion and Muhammad Ali his idol. Has appeared on the cover of Tatler, along with royal pin-up Lady Amelia Windsor. 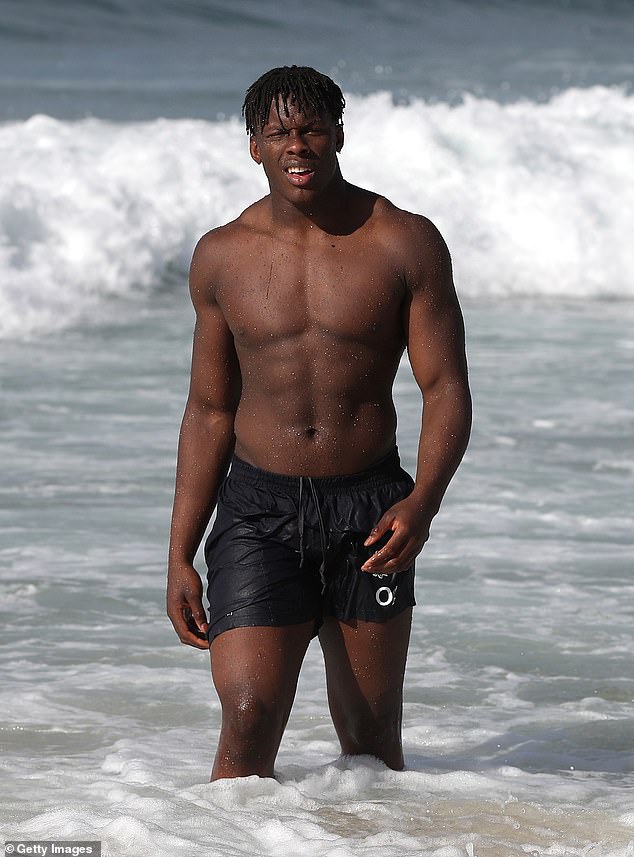 Rugby royalty. His father Andy, former rugby league and union player for England, will take over as coach of Ireland after the World Cup. Many England teammates were at his wedding last year.

Psst: Grew up in the same street as fellow England player George Ford. Ford used to do his French homework for him. 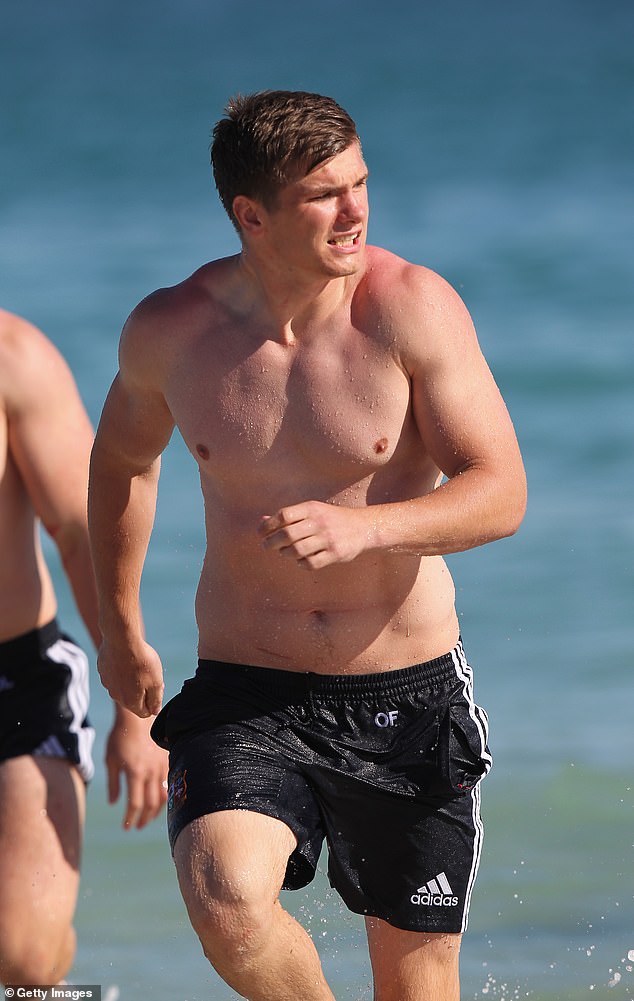 Owen Farrell, 28. Rugby royalty. His father Andy, former rugby league and union player for England, will take over as coach of Ireland after the World Cup

Hard-as-nails runner who it takes three men to stop. The Old Harrovian’s brother Mako is an England teammate and his father and uncles all played internationally.

Psst: Once wrapped a curry in a pizza and ate the whole thing like a sandwich.

Injuries and indiscipline have blighted his career. Was a member of England’s 2011 World Cup squad only to enrage authorities by jumping off a ferry into Auckland Harbour. He says a witch doctor in Samoa, where he was born, helped calm him down.

Psst: Coffee-loving Manu is the latte art champion of the team.

The human wrecking ball of the Aussie team has more to him than meets the eye. Away from the pitch he is a climate change campaigner and advocate for gay marriage. Refused to marry long-term partner Emma Palandri until same-sex marriage was legalised. 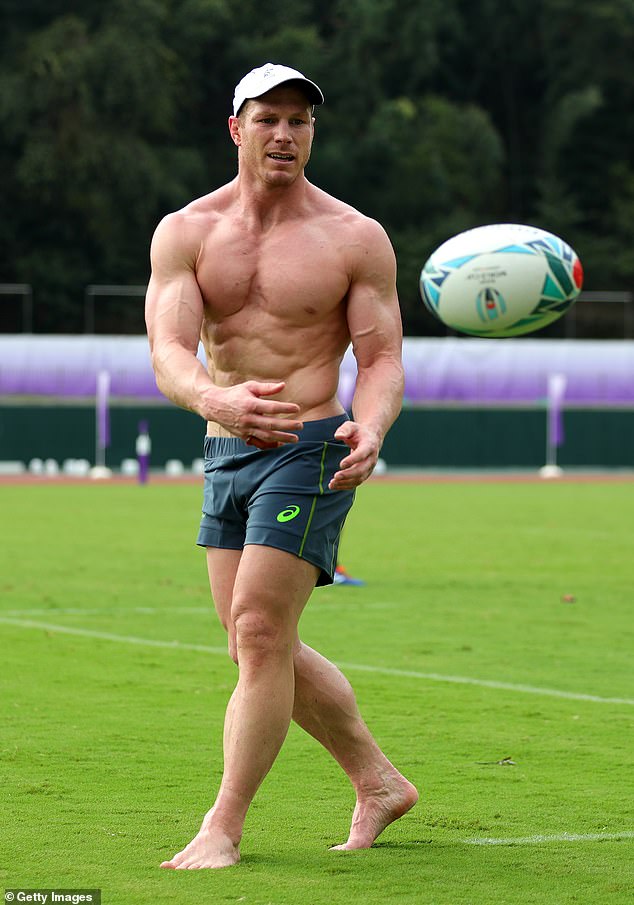 David Pocock, 31. The human wrecking ball of the Aussie team has more to him than meets the eye. Away from the pitch he is a climate change campaigner and advocate for gay marriage

Now to meet their better halves…

ALISON BOSHOFF FOR THE DAILY MAIL

The partners of England sports stars are usually of a type — leggy, blonde, good at flaunting their wealth. But the wives and girlfriends of England’s rugby team are more diverse. There’s a police officer, a nurse, PR girls, mummy bloggers and a boutique owner. ALISON BOSHOFF introduces five of them.

She has a degree in business and fashion marketing from Manchester and runs a boutique in London called Portman. She shares pictures of designer handbags with her 14,000 Instagram followers.

They got engaged in July. George said: ‘Rugby can be pretty full on. So it’s nice to come home and switch off.’ 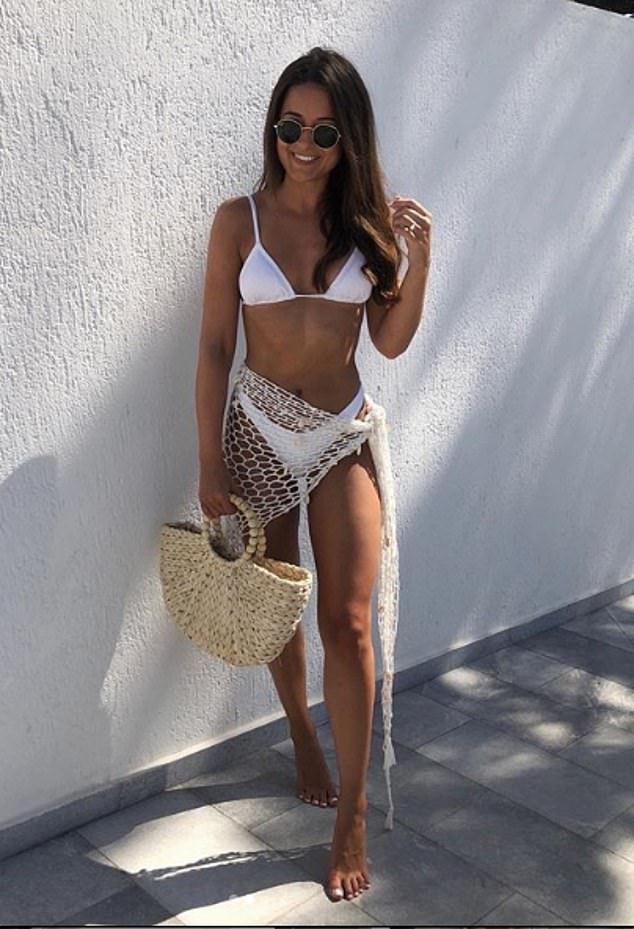 American events planner Alyse Miller is the girlfriend of Bath player Anthony Watson and they live together in the city.

She supported him during his 13 months out of the game with an Achilles tendon injury.

He said: ‘Alyse has been awesome keeping my morale high. It’s been tough dealing with me bed-bound and miserable, but she’s passed with flying colours.’

She was great friends with Eloise Harris — the former girlfriend of England centre Jonathan Joseph. 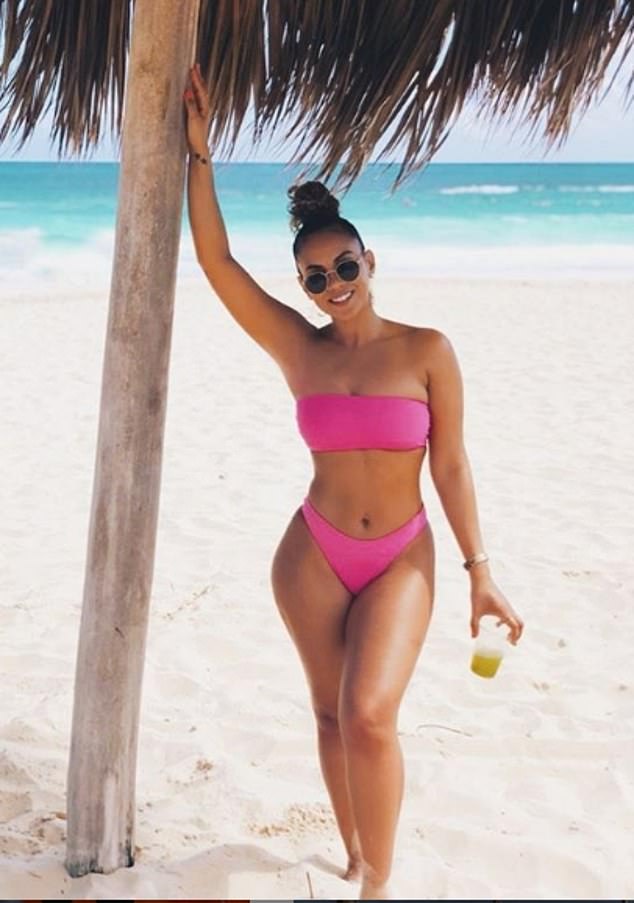 Zoe lives in Bath with boyfriend Jonathan and graduated this summer from the University of Nottingham. She posts regular pictures of nights out and holidays on her Instagram account.

Previously, Joseph had a seven-year romance with girlfriend Eloise. That ended in acrimony after reality TV personality Casey Batchelor claimed they’d had an affair.

Casey told a newspaper: ‘He just used me for fun. There was never any mention of a girlfriend.’ 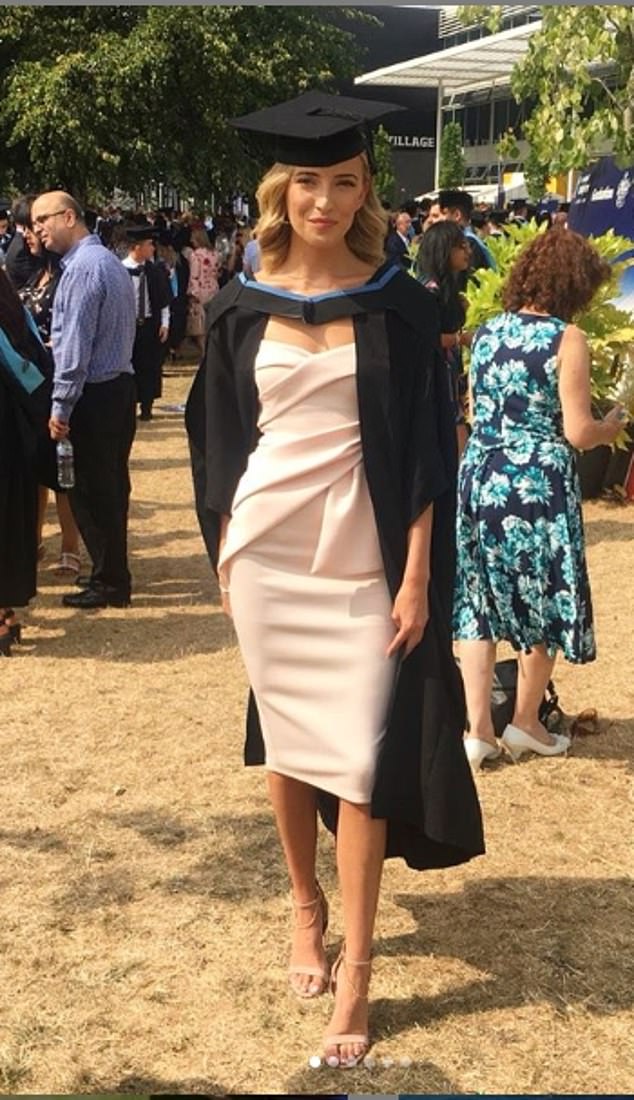 Zoe Hallack (pictured) lives in Bath with boyfriend Jonathan and graduated this summer from the University of Nottingham. She posts regular pictures of nights out and holidays on her Instagram account

Blonde Michelle, 27, is engaged to Saracens and England star Elliot Daly, 26 — and had her hen do (above) this month. They met when she was an events organiser at Whitgift School in Croydon, South London, where Elliot was in the sixth form.

They live in Leamington Spa with their pug, Winston. 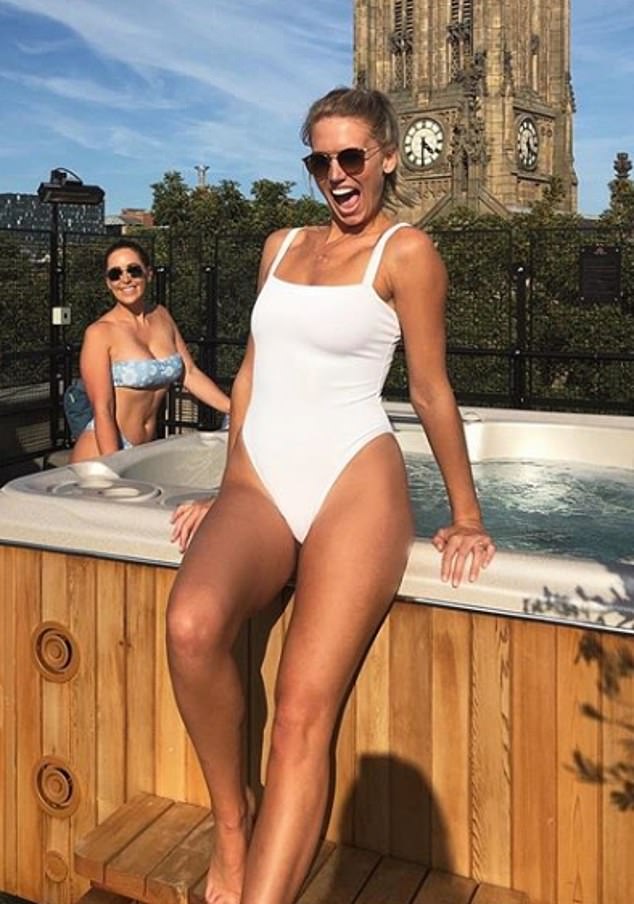 Jessica, wife of Northampton Saints forward Courtney, bills herself as an upmarket mummy blogger. The mum of four runs The Mum Club, a website offering support. The tag line is: ‘For honest women that keep Sudocrem in their Chanel and Pampers in their Prada.’

She and Courtney married in 2015. But she doesn’t want her children to follow Dad into professional rugby: ‘I would be running onto the pitch telling them to stop.’ 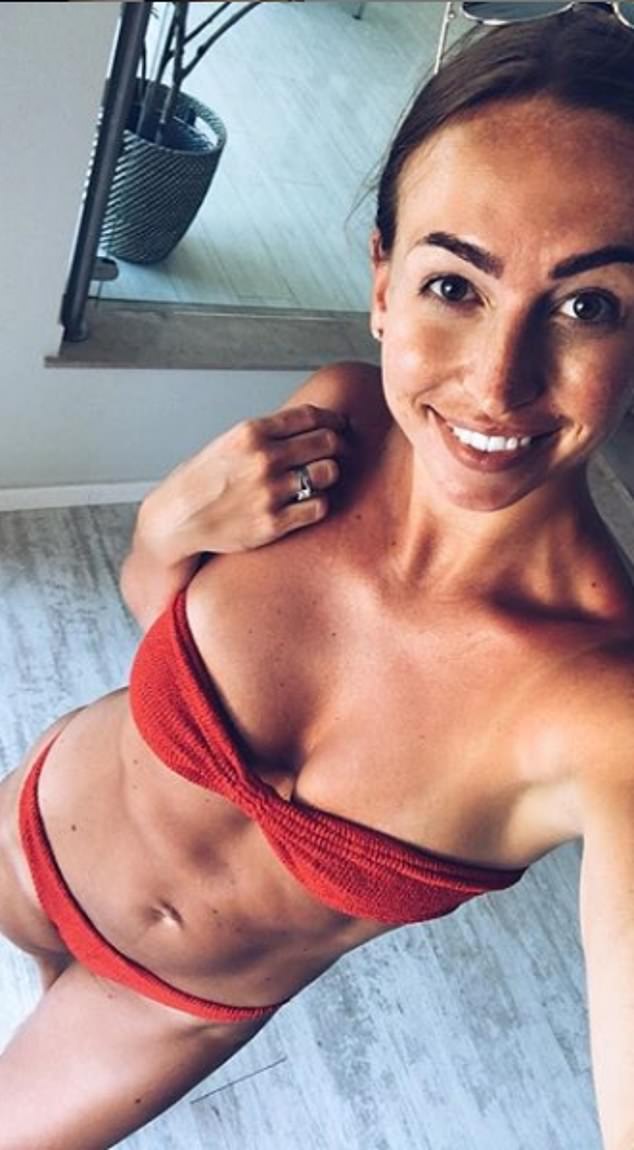