Angelina Sacjuka, 30, is wanted by Latvian Police for murder and grievous bodily injury after she and an accomplice punched and kicked a woman to death before hiding the body beneath leaves

A ‘voodoo’ sex trafficking suspect and an on-the-run killer are among the criminals listed by Europol in a campaign to catch the continent’s most wanted women.

In their ‘crime has no gender’ campaign, Europol has revealed the details and faces of fugitives wanted by 21 European countries.

Among them are 18 woman who are convicted or accused of crimes including murder, human trafficking, drugs trafficking and serious fraud dating back as far as 1996.

Angelina Sacjuka, 30, is wanted by Latvian Police for murder and grievous bodily injury after she and an accomplice punched and kicked a woman to death before hiding the body beneath leaves.

In the attack, Sacjuka, who was sentenced to three years and 11 months in prison, knocked the victim to the ground before repeatedly punching and kicking her, breaking most of her ribs and causing ‘deadly damage’ to her vital organs.

Also among the most wanted women is Iveta Tancošová, 52, who is sought by Czech Police after she lured a young girl to England under the pretense she would work as a nurse in 2001.

Immediately after the girl arrived, Tancošová took her passport and told her that she would work as a prostitute, Europol said. 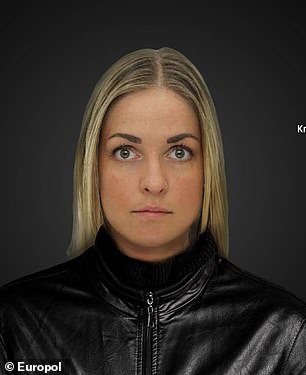 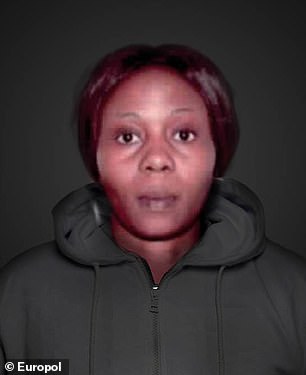 Kristi Amberg (left) is wanted by police in Estonia for buying and selling ‘large quantities’ of narcotics between July and September 2017. Jessica Edosomwan (right) is sought by French authorities after she escaped when police raided a prostitution ring in Lyon in 2007. The ring was said to have exploited some 60 prostitutes who were lured to France. Once in France, the woman were subjected to voodoo ‘juju’ rites, police said

The girl refused and was beaten and locked in a room where she had to provide sexual services to dozens of ‘clients’ on a daily basis for several months, before she was sold to Tancošová’s relatives in Ireland in January 2011.

Tancošová, who is on the run, was sentenced to seven and a half years in prison for her crimes.

Jessica Edosomwan, a Nigerian citizen who escaped after police raided a prostitution ring in Lyon in 2007, is wanted by French authorities.

The ring exploited some 60 prostitutes who were smuggled into France through Libya with the promise of a better future when they arrived.

Once in France, the destitute women were subjected to voodoo ‘juju’ rites and their families were threatened, police said.

The case against the suspects are expected to start in Lyon on November 6 and Edosomwan is the only suspect still outstanding. 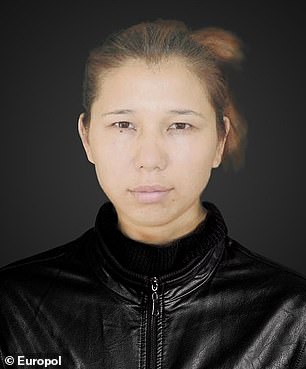 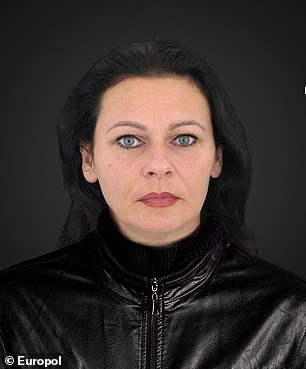 Adilet Shakirgazieva (left) is wanted by Malta for a series of armed robberies which took place in apartments across the country in 2015. She and four men were said to have broken into homes and stolen jewellery and money. Shakirgazieva was arrested in 2015 and disappeared after she failed to attend court in July 2017. Renáta Lorinc (right) is wanted by Slovakian authorities after she made unauthorized withdrawals on behalf of her clients at the bank where she worked

She is believed to be either in the Benelux countries, Italy or Germany, police said.

‘People think that usually these crimes are not being committed by women, but they are and they are equally as serious as those committed by men’, Europol spokeswoman Tine Hollevoet said.

In the campaign, the faces of fugitives are hidden behind neon masks on the Europol website, before their identities are slowly revealed as visitors scroll through the page.

‘After the last time a viewer scrolls [on the Europol website], the face of the wanted fugitive is revealed and they will be able to see if it’s a man or a woman.

‘The idea is to attract as many visitors as possible, with experience showing us that the more eyes that look at the wanted fugitives, the higher the chance to locate and arrest the wanted person’. 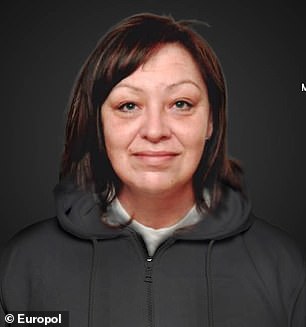 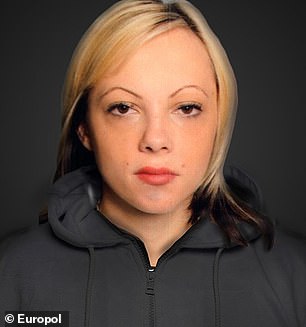 Zorka Rogic (right) is sought by police in Croatia for illicit trafficking in narcotic drugs and psychotropic substances and weapons, munitions and explosives. Melanija Stropnik (left) is wanted by Slovenia after she ‘seduced and defrauded’ a man to give her 188,042 euro (£16,000) in cash 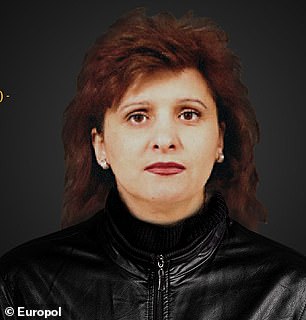 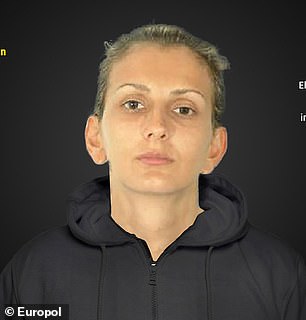 Elena Puzyrevich (right) is wanted by Spain for human trafficking after she lured forced nine Russian girls into prostitution at a club in Cáceres. One of the girls jumped through a window to try to escape, and was hospitalised for her injuries. Radina Stancheva Zhecheva (left) was sentenced to five years in prison in Bulgaria in 2018 for a series of frauds she committed between 2010 and 2011. Police said she acted as an unofficial broker and used forged personal documents 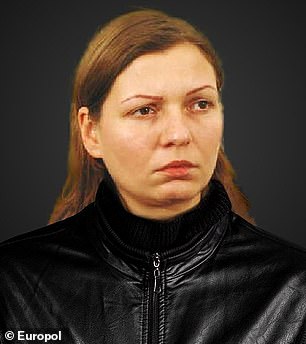 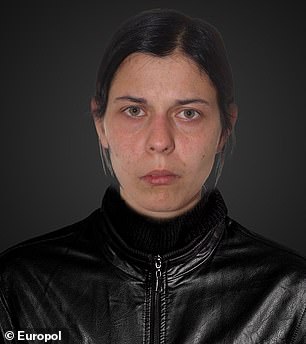 Polish national Dorota Kaźmierska (left) was sentenced to 25 years in prison after she shot her husband in the head with a firearm Walter P99 in January 2008. Ildikó Dudás (right) is wanted by Hungarian police for drug trafficking and abuse of minor. She was said to have often brought her children with her to drug deals at nightclubs and bars close to the Lake Balaton 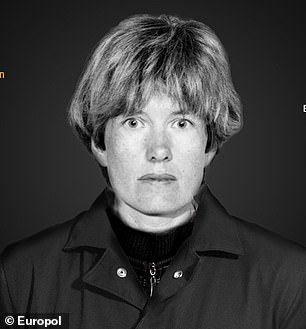 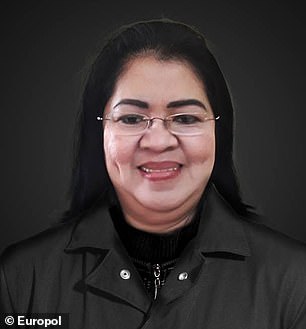 Hilde Van Acker (left) was sentenced to life imprisonment in 2011 for the murder of Brit Marcus John Mitchell in Belgium in 1996. She and her partner Jean-Claude Lacote were both convinced of murder at Assize’s Court of West-Vlaanderen. Elizabeth Dizon Honrada (right) is wanted by the Netherlands after she imported cocaine into the country twice in 2003 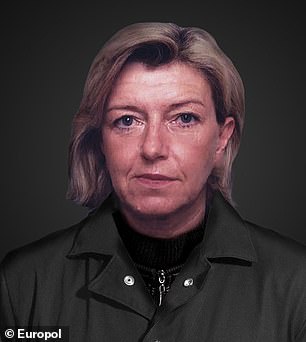 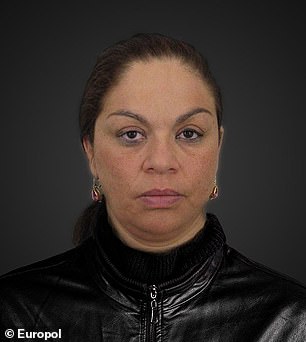 Elisabeth Gertrude Skarits (left) is wanted by Austria for alleged real estate and rental fraud which caused the loss of 4.3million euros between 2005 and 2008. The offences were reportedly committed as she worked as the managing director of a property management company. Monika Rafaelova (right) is wanted by Sweden after she repeatedly committed aggravated thefts against elderly women in food stores and shopping centres. She was said to have stolen the bags and wallets of her victims and withdrawn money from their accounts 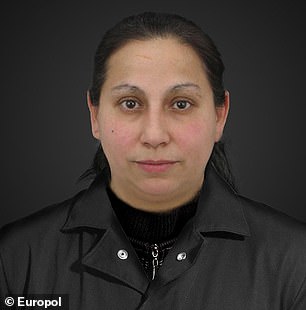 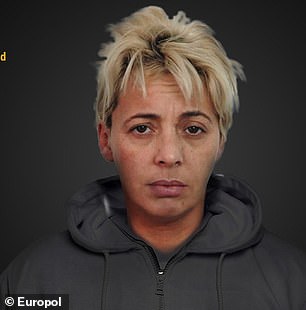 Iveta Tancosova (left) is wanted by the Czech Republic for human trafficking after she lured a young girl to England under the pretense that she would work as a nurse before forcing her into prostitution. She then sold her victim to relatives in Ireland in January 2011. Tancosova was sentenced to seven and a half years in prison but is on the run from the law. Ildiko Enderle (right) is wanted by Romanian Police after she recruited young girls with the promise of a job in Germany, before transporting them to the Czech Republic and forcing them into prostitution