Bernardine Evaristo, the first black woman to win the Booker Prize, slams BBC News for ‘removing my name from history’ – as presenter names co-winner Margaret Atwood but calls her ‘another author’

By Jo Tweedy For Mailonline

The first black female winner of the Booker Prize has launched a scathing attack on the BBC News Channel after a presenter failed to mention her by name while talking about the award – but did name-check her co-winner.

British author Bernardine Evaristo won the award in October for her book Girl, Other, Woman, sharing the prestigious prize with Margaret Atwood’s The Testaments.

However, in a BBC News Channel report which aired on Tuesday night, presenter Shaun Ley referenced only Atwood by name when discussing how this year’s prize was shared, calling Evaristo ‘another author’.

After footage of the blunder – which the BBC has since said was an ‘ad lib’ – was posted on Twitter, Evaristo spoke out against the broadcaster.

Last month, Bernardine Evaristo, right, and Margaret Atwood were jointly awarded the Booker Prize 2019. However, Evaristo has complained about BBC News presenter Shaun Ley after he named Atwood but called her ‘another author’ while discussing the sharing of the prize

During the report, which aired at 11:00pm, Ley is heard discussing art award The Turner Prize, which has been given to all of the four finalists this year.

The presenter compares the decision to that of last month’s Booker Prize, saying: ‘Now, this is a bit different from the Booker prize earlier in the year where the judges couldn’t make up their minds, so they gave it to Margaret Atwood and another author, who shared the prize between them.’

Evaristo responded to not being named and asked people to retweet her post, saying: ‘Pls RT: The @BBC described me yesterday as ‘another author’ apropos @TheBookerPrizes 2019.

‘How quickly & casually they have removed my name from history – the first black woman to win it. This is what we’ve always been up against, folks.’

Those who saw Evaristo’s tweet reacted strongly, with many criticising the BBC for not naming her while discussing the literary prize.

@AMNabirye wrote: ‘Absolutely raging @BBC. How is this even possible! Disgusting that you feel like you can just casually erase @BernardineEvari from her history making achievement. Not on. An apology at the very least. You need to deeply investigate your institutional racism.’

@ClaireShrugged added: This is shameful coverage from @BBCNews. An unacceptable act of erasure. Bernardine is a brilliant author who won the Booker, so put some respect on her name. 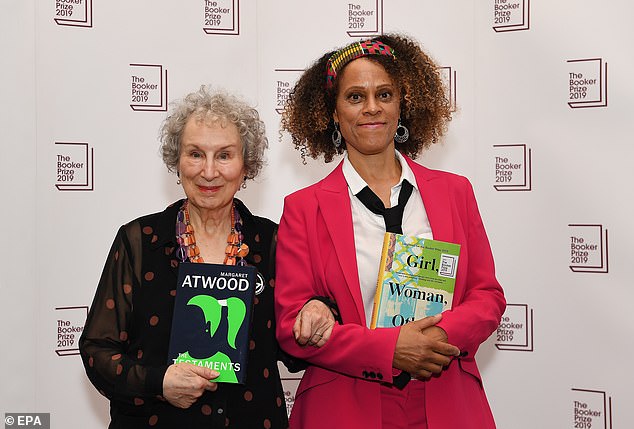 Evaristo, the first black woman to win the Booker Prize, pictured right, said ‘This is what we’ve always been up against, folks’ in her attack on the BBC (Pictured with Margaret Atwood, left, and their winning novels)

@LexisWriting wrote: ‘Don’t do this, BBC. It’s the 21st century and we should be fixing these problems, not perpetuating them.’

MailOnline has contacted the BBC for comment. A spokesperson said: ‘Our presenter was speaking live when he made the comparison between the Turner and Booker prize results – this part of the item was unscripted and he didn’t say Bernadine Evaristo’s name at the time. We apologise to her for the offense caused.’

Selected from more than 150 entries, the authors shared £50,000 and the honour of having their books judged the best of the year during the Booker Prize announcement on October 14th.