Now THAT’S how to celebrate! Footballer toasts sixth goal of season by catching BEER hurled from crowd then chugging it in front of fans

A football player celebrated scoring his sixth goal of the season by catching a beer that flies out of the crowd and chugging it.

The footage was captured on television cameras that were around the stadium of Almere City Football Club in the Netherlands.

The team were playing in front of their home supporters against fellow Dutch opponents Go Ahead Eagles.

In the highlight video of the match, the two teams stride out on to the pitch before the game kicks off.

The match appears to be end to end with both teams having chances but the players go in at half-time with a stalemate scoreline.

Then in the 67th minute Almere City make a break and the ball is guided into the back of the net by forward Shayon Harrison.

The footage was captured on cameras around the stadium of Almere City Football Club in the Netherlands. Shayon Harrison scored in the 67th minute before running to the corner flag to celebrate 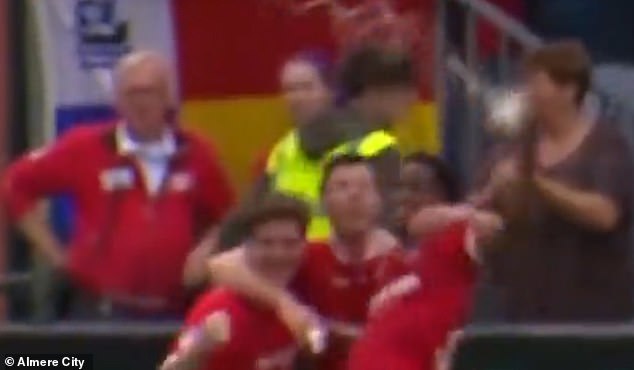 Harrison runs over to the corner flag before being joined by his teammates.

The camera begins to pan up to the crowd but suddenly a plastic cup full of beer shoots across the screen from the left-hand side.

Despite being surrounded in a huddle by other players, Harrison effortlessly raises his left arm and snatches the beer out of the air. 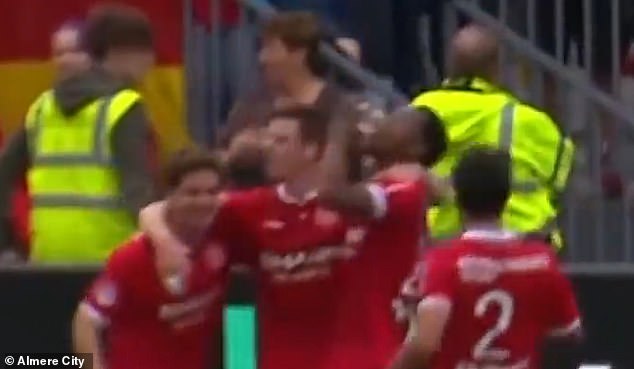 He then downs the beverage before flinging the empty cup back on to the pitch.

The video continues to show the rest of the highlights to the game that ended 1-1.

Harrison moved to Almere City in 2019 and has so far scored six goals in seven matches.

He originally made his professional debut three years earlier for Tottenham Hotspur.