Mr Netanyahu announced on Monday evening he could not form a new government following a deadlocked September election, clearing the way for Mr Gantz to try.

Gantz’s centrist Blue and White alliance won 33 seats in parliament, one more than Netanyahu’s Likud, but he has not so far secured the support of the majority of the 120 lawmakers needed to form a stable coalition.

The 60-year-old former paratrooper, had no previous political experience when he declared himself Netanyahu’s electoral rival in December.

The 60-year-old former paratrooper, had no previous political experience when he declared himself Netanyahu’s electoral rival in December

After receiving the expected formal nomination on Wednesday evening, Mr Gantz will have 28 days to build a coalition.

Rivlin will officially mandate Gantz with the task at a ceremony at 8:00 pm (1700 GMT) at his residence.

It will be a landmark moment in Israeli politics since Netanyahu has been given the president’s mandate to form a government after every election since 2009.

Mr Gantz has not revealed his strategy but is expected to invite Mr Netanyahu to join him in a national unity coalition, as long as he vacates the office of Prime Minister.

If Mr Gantz fails to form a government, the country will automatically start its third election campaign in less than a year.

One of the few things clear in Israel’s post-electoral morass was that Netanyahu, who celebrated his 70th birthday on Monday, was not giving up.

But his announcement was a landmark moment in Israeli politics since Netanyahu has been given the president’s mandate to form a government after every election since 2009.

Announcing his decision with a social media video, Netanyahu sought to blame Gantz, since the ex-military chief has refused to negotiate on the premier’s preferred terms. 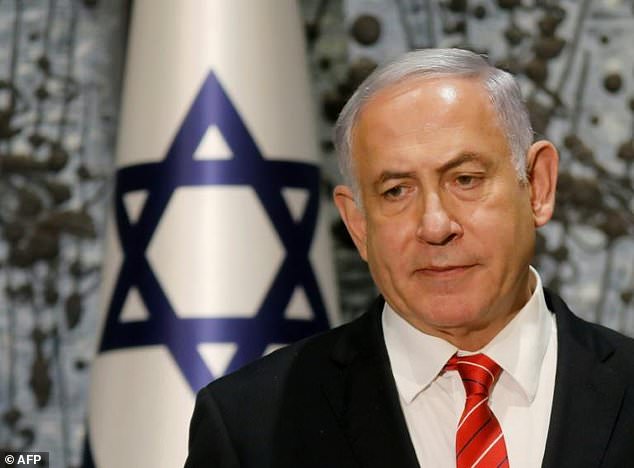 Benjamin Netanyahu, Israel’s longest-serving prime minister, has held the position for a total of more than 13 years

One of Netanyahu’s closest allies, Energy Minister Yuval Steinitz, argued Tuesday that the prime minister had been ‘obstructed’ in negotiations.

‘To the contrary, one comes to negotiations when one begins with disagreements. Therefore, if Benny Gantz offers Netanyahu to sit down with him one-on-one, I’m confident that Netanyahu will sit with him.’

Israeli public television reporters caught up with Gantz outside his home after a workout on Tuesday morning.

‘We’re always optimistic, it’s a way of life,’ he said from behind the wheel of his car, dressed in shorts and a T-shirt.

A senior member of his centrist Blue and White alliance was strongly critical of Netanyahu.

‘What has Bibi done with the mandate to build a government? Four weeks of nothing,’ Ofer Shelah said on Twitter, using Netanyahu’s nickname.

‘He passed the time in order to continue as prime minister for a little while longer… Bibi wants elections. That is obvious.’

The Blue and White leader had no political experience before he mounted his challenge to the prime minister he once worked with as military chief of staff, but has now found himself at the doorstep of power.

Entering the office Netanyahu has held for a total of more than 13 years, however, would be a challenge even to the most skilled politician.

The deadlock following last month’s polls will likely require major concessions or a decision by members of Netanyahu’s right-wing Likud to abandon him — and the two options appear a long way off for now.

Both Likud and Blue and White say they want a unity government, but they are divided on how to achieve it.

Likud has been seeking to negotiate based on a compromise set out by Rivlin that takes into account the possibility the premier will be indicted for corruption in the coming weeks.

It could see him remain prime minister for now, but step aside at some point later as he combats the charges.

Gantz would take over as acting premier under such a scenario.

Blue and White says Gantz should be prime minister first under any rotation arrangement since his party won the most seats, finishing with 33 compared to Likud’s 32.

An opinion survey released Tuesday showed 56 per cent of the public supports a rotation between Gantz and Netanyahu as prime minister.

Some 65 per cent said Netanyahu should resign as head of Likud if indicted, in the poll conducted by the Israel Democracy Institute think tank.