Furious London commuters have dragged two Extinction Rebellion protestors down from on top of a DLR train train after the pair tried to stage a sit-in to disrupt this morning’s travel.

The protestors’ antics at Canning Town underground station are part of a resurgence from the eco-activist group, which says today its members will target both the London the tube network and Gatwick airport.

Hundreds of activists in Trafalgar Square put black tape over their mouths, to symbolise the silencing of their protests by police and to demand the right to freedom of expression. Meanwhile in Kings Cross mothers insisted Google should ban those who deny or question climate change from posting videos on Youtube.

The eco-activist group has now said its members will protest ‘mischievously’ at Gatwick airport tomorrow, promising ‘musicians, clowns and singers.’

Today’s protests are in open defiance of the Metropolitan Police, who on Monday issued a Section 14 order prohibiting XR demonstrations anywhere in the capital and leaving any protestors at risk of arrest.

Guardian writer George Monbiot, who had penned a column on why he hoped to be arrested, was dragged away by police, as was Green Party co-leader Jonathan Bartley. 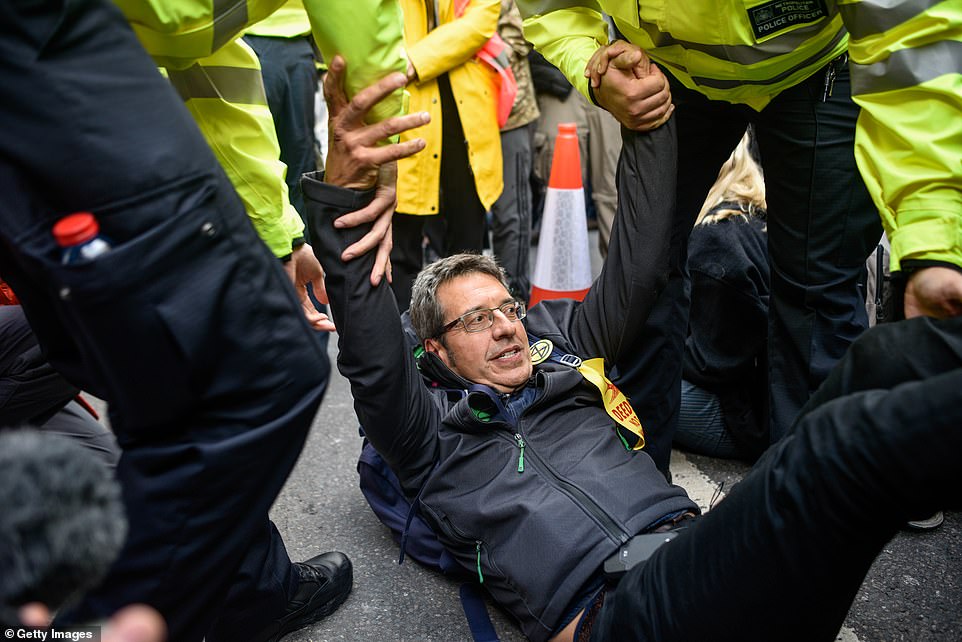 Guardian writer George Monbiot is taken away by police at the demo, after writing a column on why he hoped to be arrested 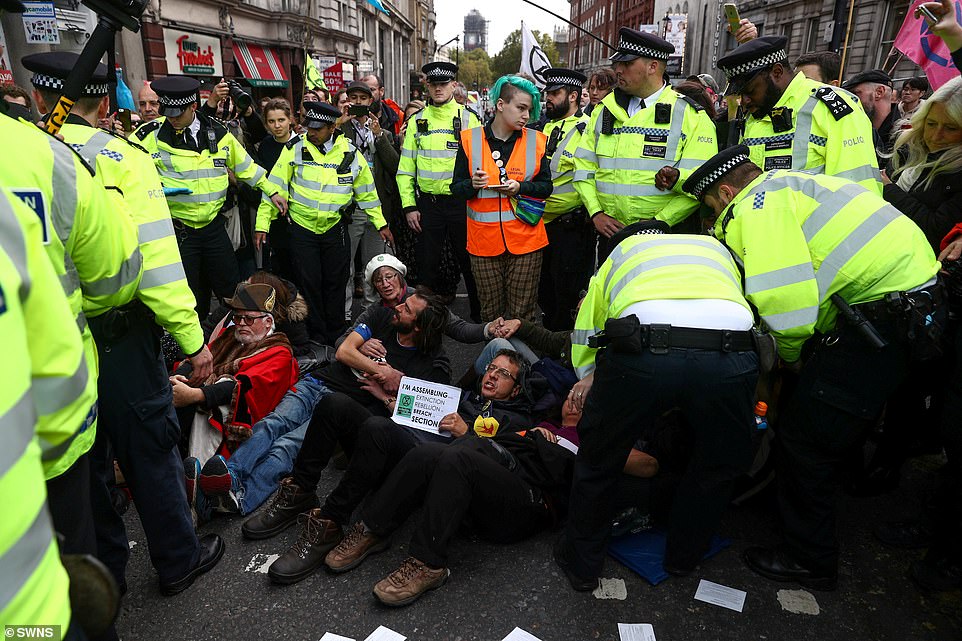 Police moved in on the Extinction Rebellion protest, including Guardian columnist George Monbiot (recumbent, with sign) 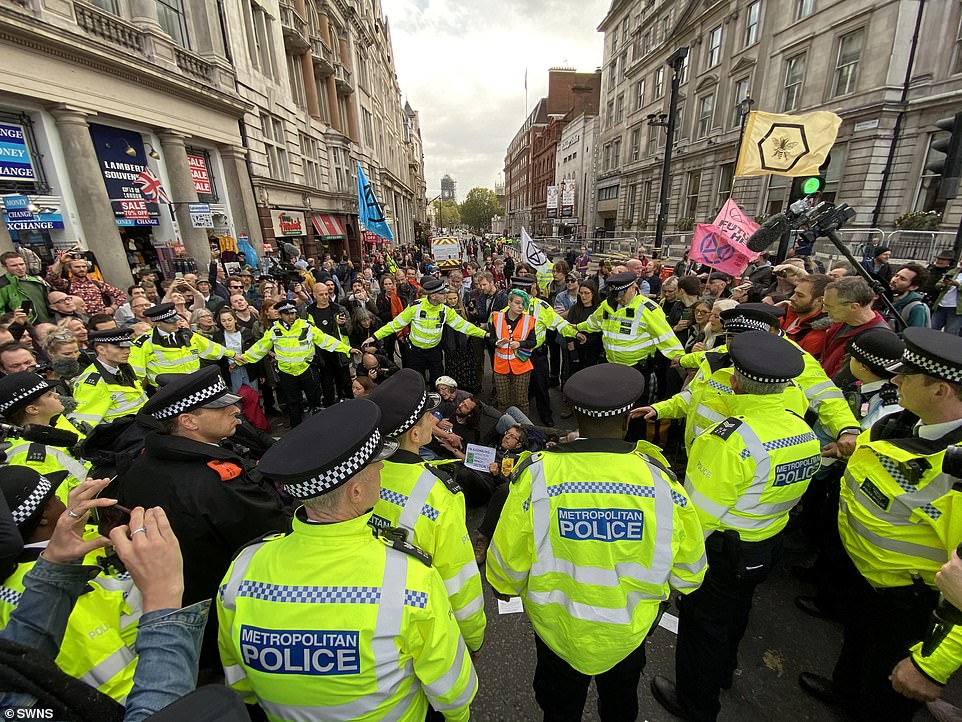 Supporters had prevented Monbiot from being carried away by police, by lying next to him so they must be removed first 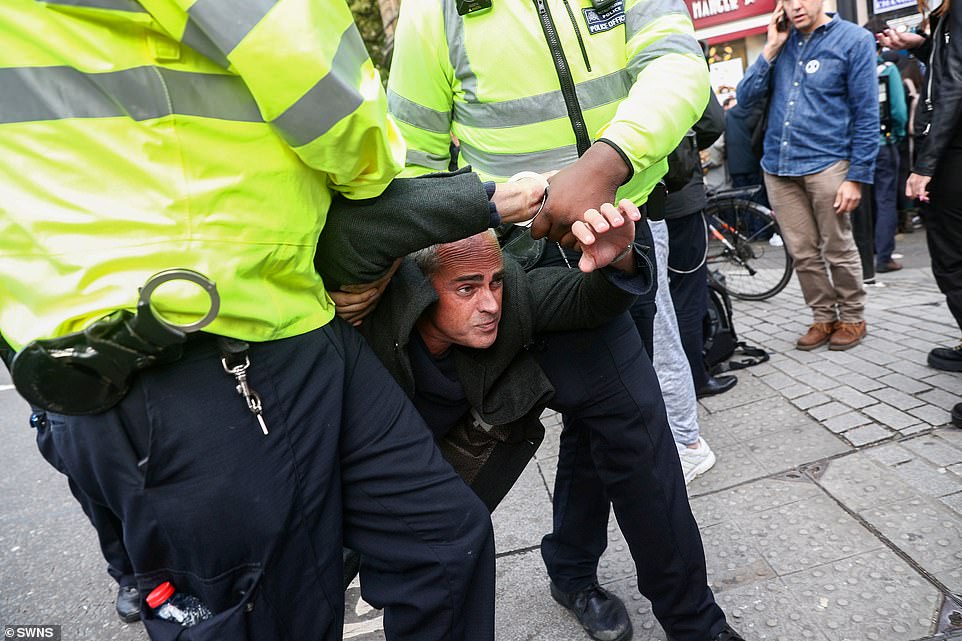 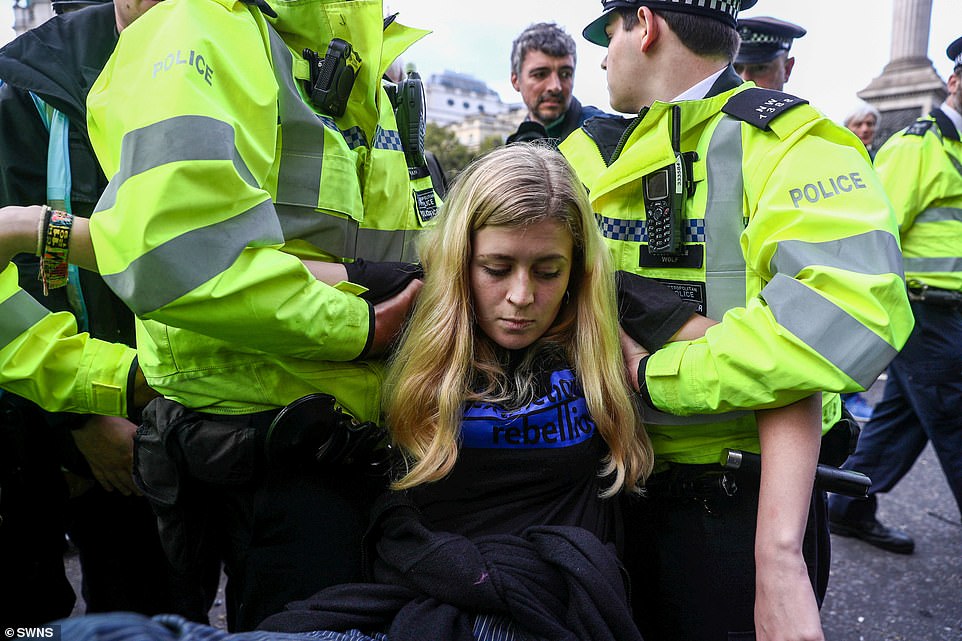 Police arrested others, including this woman, as climate change activists were replaced by other demonstrators as each was taken away

In Trafalgar Square councillor Andree Frieze, Green Party candidate for Richmond South, who took part, said: ‘This symbolises the way our voices are being shut down, our voices are not being listened to.

‘Other people have brought the tape and they’re sharing it around. It’s a very powerful symbol of how our protest is being silenced. I believe the police action is illegal.

‘This is a question of civil liberties. Everyone at Trafalgar Square now is at risk of arrest.’

Online the group announced its members plan to target Gatwick Airport tomorrow morning, with protesters planning to arrive at the South Terminal at 11am.

Posting on group messaging app, one member urged others to ‘come incognito’ and then ‘reveal yourself’ after a signal is given adding ‘musicians, clowns and singers’ would be welcome and that ‘some people may like to indulge in a bit of mischief’.

The Sun reported that the post read: ‘We’re going on a trip to Gatwick Airport!

‘With a light-hearted, informative vibe, lets give a wake-up call (again) about the urgent need to reduce the number of flights, not expand airports.

‘We call on passengers and friends to join us in tackling the Climate and Ecological Emergency.

‘They have the opportunity to contribute to safeguarding our future by limiting air travel to just essential journeys. Let’s make them welcome.

‘Come incognito and await the signal at 11am to reveal yourself!

‘Performers, musicians, clowns, singers, party hats welcome. We will be handing out leaflets encouraging people to play their part in what lies ahead.

‘If inclined, some people may like to indulge in a bit of mischief but the intention is not to cause people to miss flights. Fun and imagination welcome.

‘Though we can’t know what line the police or airport staff will take, so far as we know there is nothing in what we have outlined that would be against airport byelaws.’

Climate activist George Monbiot had been refusing to move from the road at Whitehall.

Mr Monbiot, 56, has been warned by police if he continues to obstruct the highway he will be detained for a breach of public order.

He was surrounded by Extinction Rebellion supporters, including 20 ‘red brigade’ protesters.

Supporters are preventing Monbiot from being carried away by police, by lying next to him so they must be removed first.

Police have arrested three people beside Mr Monbiot so far, who have been replaced by other activists.

Protesters have surrounded those lying on the street, chanting ‘power to the people’ and drumming.

They tweeted: ‘Our co-leader @jon-bartley has been arrested on Whitehall whilst peacefully protesting.’ 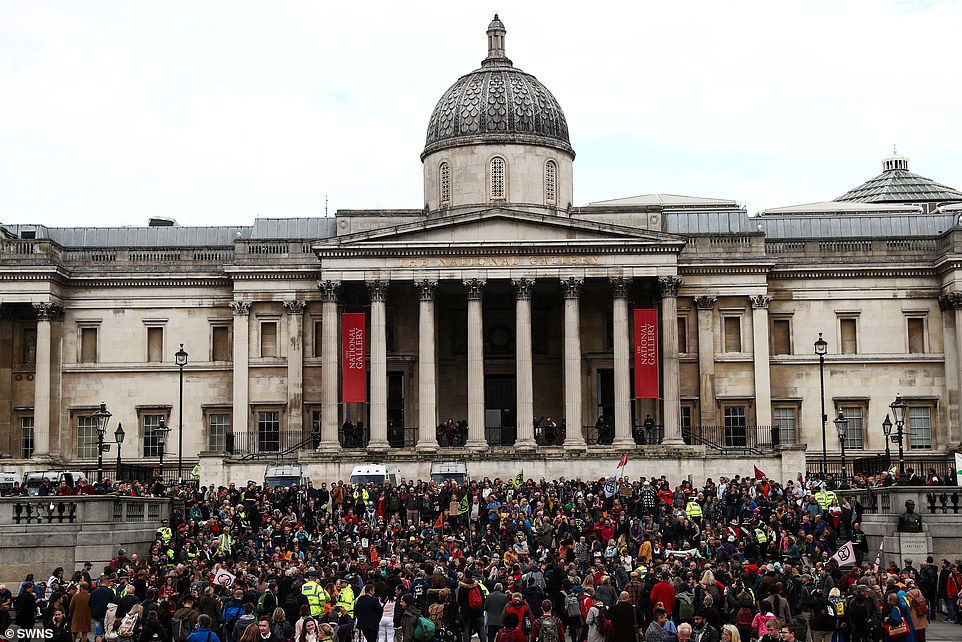 Today a senior Met officer insisted the ban on XR’s ‘Autumn Uprising’ climate change protests issued on Monday is legal – despite a review having been requested by lawyers – and warned activists they face arrest.

Deputy Assistant Commissioner Laurence Taylor, who is leading the policing of the demonstrations, said he is ‘completely comfortable’ with the action the force has taken.

Lawyers for XR were at the High Court on Wednesday to apply for a judicial review of the ban amid claims that the order is not legal and breaches the right to protest.

Mr Taylor said: ‘We are very confident that what we’ve done is entirely lawful, entirely proportionate in the circumstances, and we are completely comfortable with the position that we maintain.’

The force used section 14 of the Public Order Act initially to restrict the protest action to Trafalgar Square, but following ‘continued breaches’ of the order officers moved in to clear the area.

Any assembly of more than two people linked to the XR Autumn Uprising action is now illegal in London.

Activists have defied the ban, with breastfeeding mothers with babies and children staging a sit in outdside the offices of Google and YouTube, as well as the rally at Trafalgar Square. 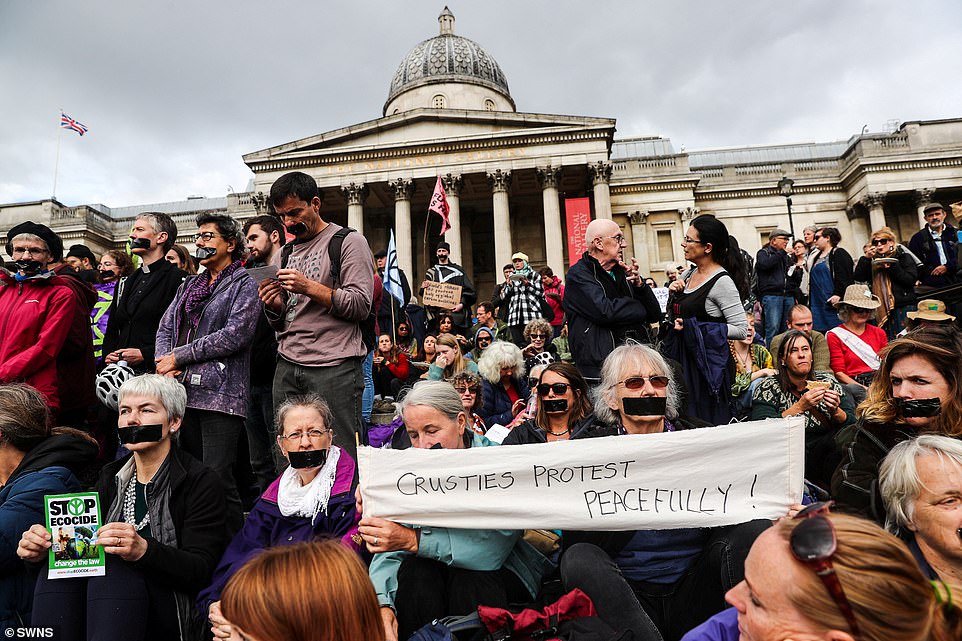 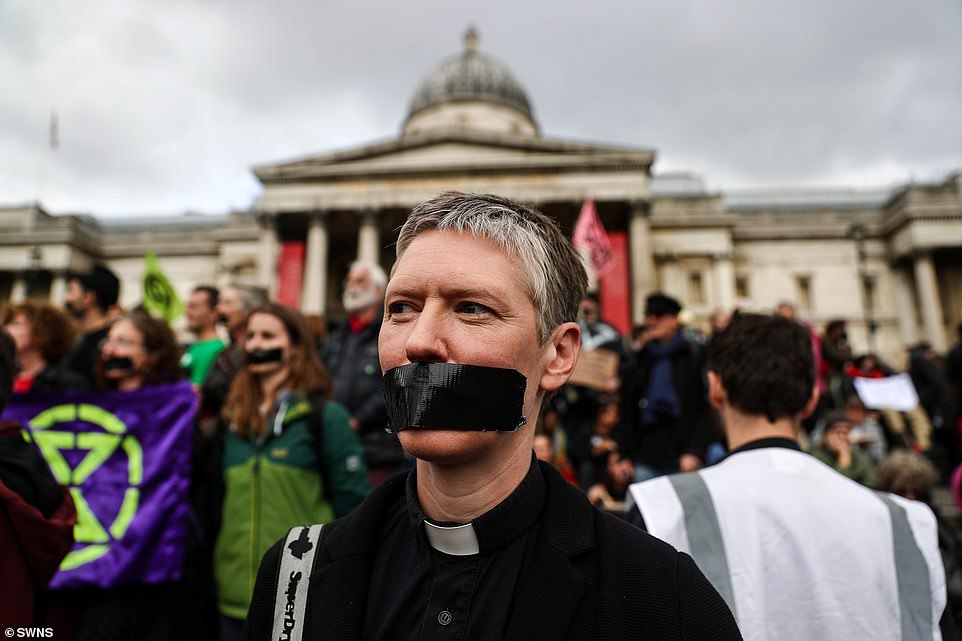 So far 1,642 protesters have been arrested, and 133 charged. XR’s stated tactics are to overwhelm the capacity in police custody, including by refusing bail after being arrested.

Asked whether officers will arrest everyone who attends Trafalgar Square today in defiance of the Section 14 order, Mr Taylor said: ‘We will take a balanced and proportionate response to whatever we’re faced with, as we have done since Monday.

‘If people do assemble at Trafalgar Square they are clearly in breach of the section 14 conditions and are therefore liable to arrest.

‘As with all policing we will review the situation and will make decisions that are appropriate to those circumstances. But people, if they gather there, are liable to arrest.’ 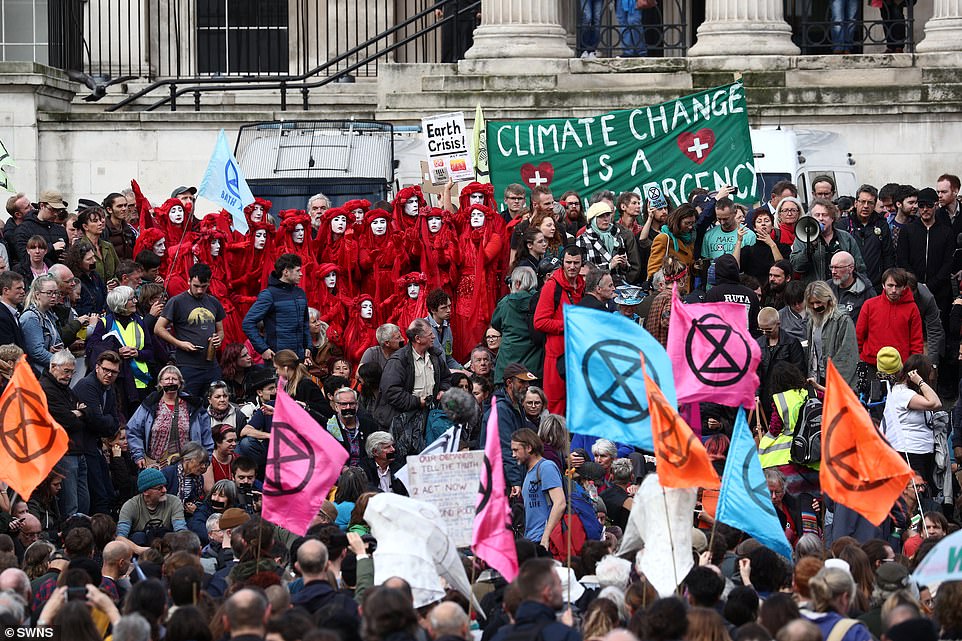 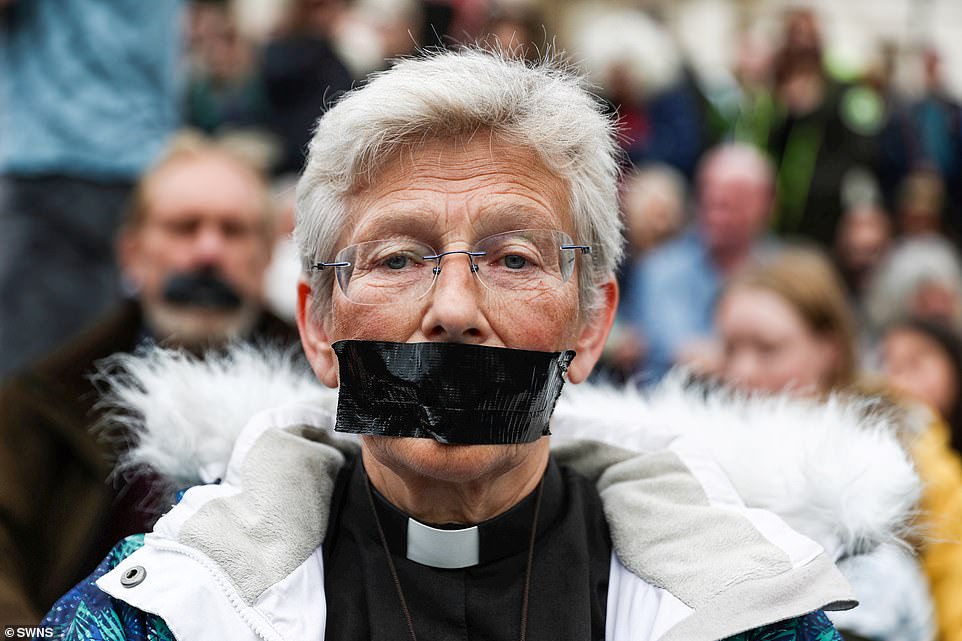 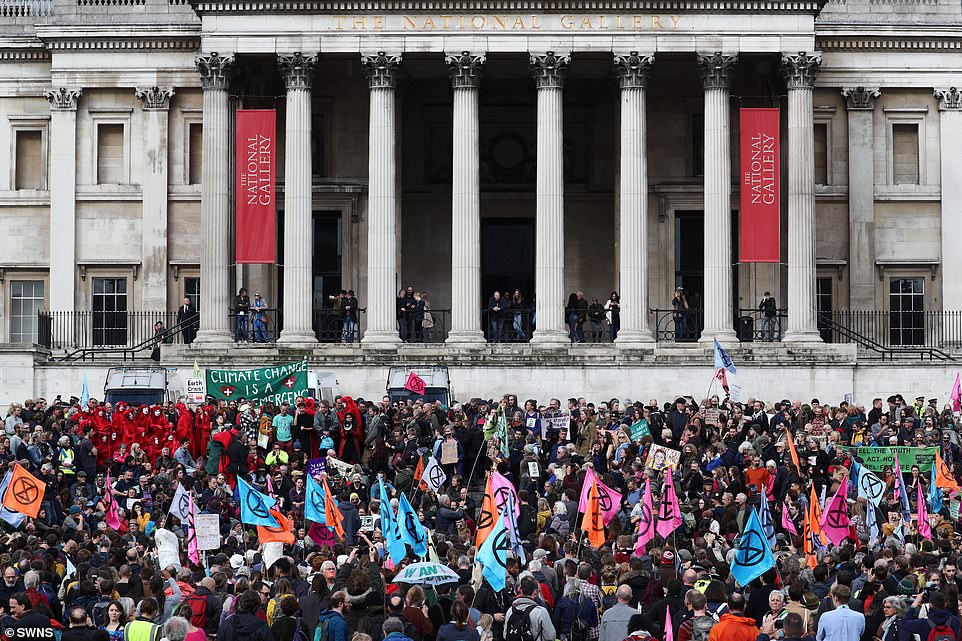 The rally outside the Natiojnal Gallery is a provocation to police, who stopped short of saying all attendees would be arrested

On Thursday XR activists plan to target the Tube network, which the senior officer called ‘unacceptable’.

He said: ‘Tomorrow Extinction Rebellion have explicitly said they intend to target the Underground network.

‘That will cause huge disruption for London and we consider that wholly unacceptable, and obviously will be policing that with our partners at British Transport Police.

‘It will cause a huge impact to London and all the commuters and everybody using the Underground network. Obviously we will be policing that proactively and robustly.’

Julian Thompson, from XR, said: ‘We have been on the streets to demand that the Government produces a plan to deal with the climate and ecological emergency.

‘The Government’s silence is deafening, with no mention of it in the Queen’s Speech, which is their programme for government for the year.

‘At a time when it’s more important than ever to peacefully assemble and protest on these emergencies, we are now at risk of being silenced by the authorities.

‘This is a dangerous precedent. We need more democracy, not less.’

A Government spokesman said: ‘The UK is already taking world-leading action to combat climate change as the first major economy to legislate to end our contribution to global warming entirely by 2050.

‘While we share people’s concerns about global warming, and respect the right to peaceful protest, it should not disrupt people’s day-to-day lives.’ 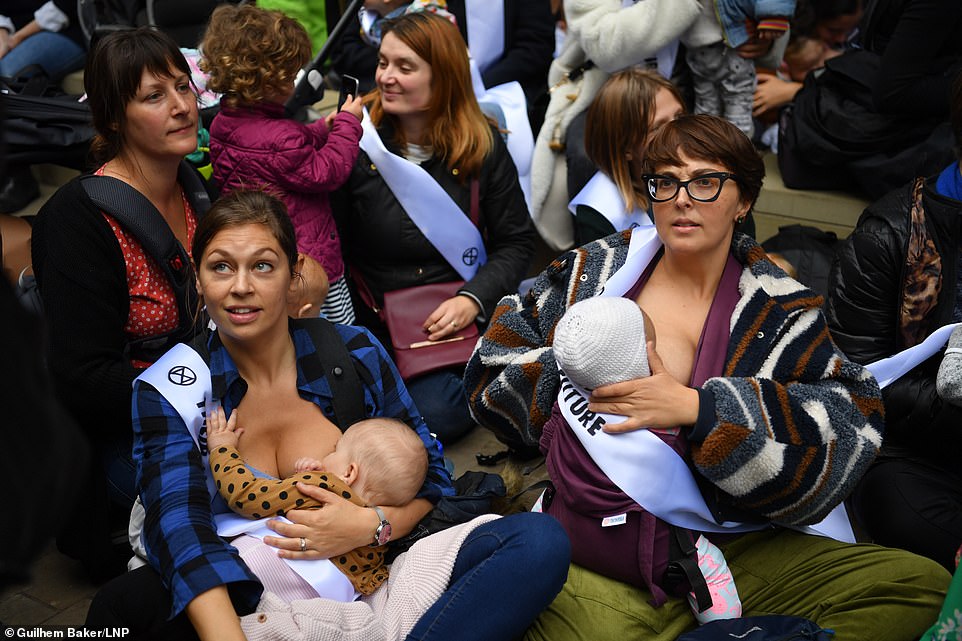 A large crowd of mothers with children and babies, including several women who breeastfed their babies during the protest, gathered outside Google’s London HQ 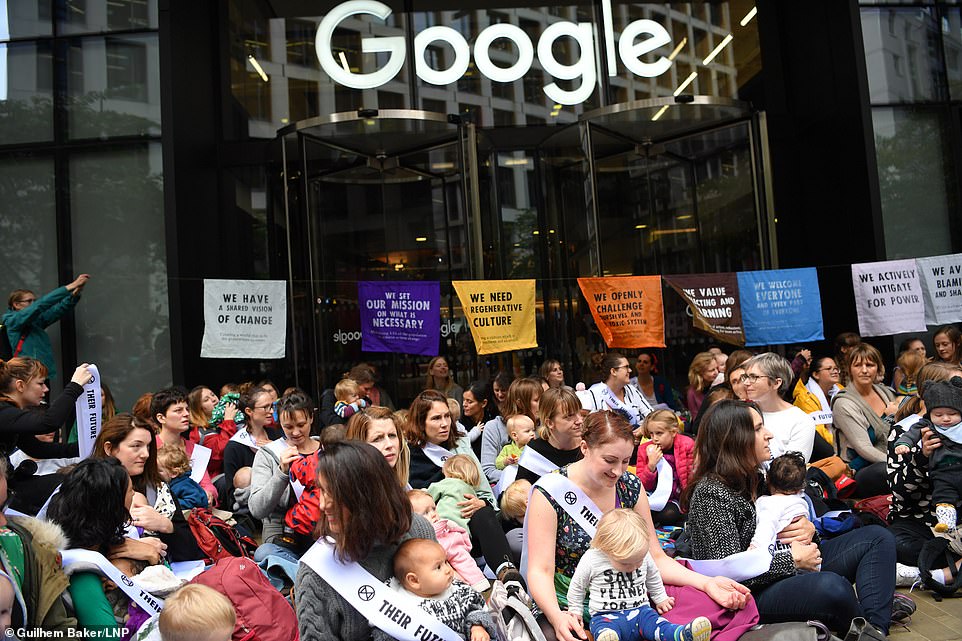 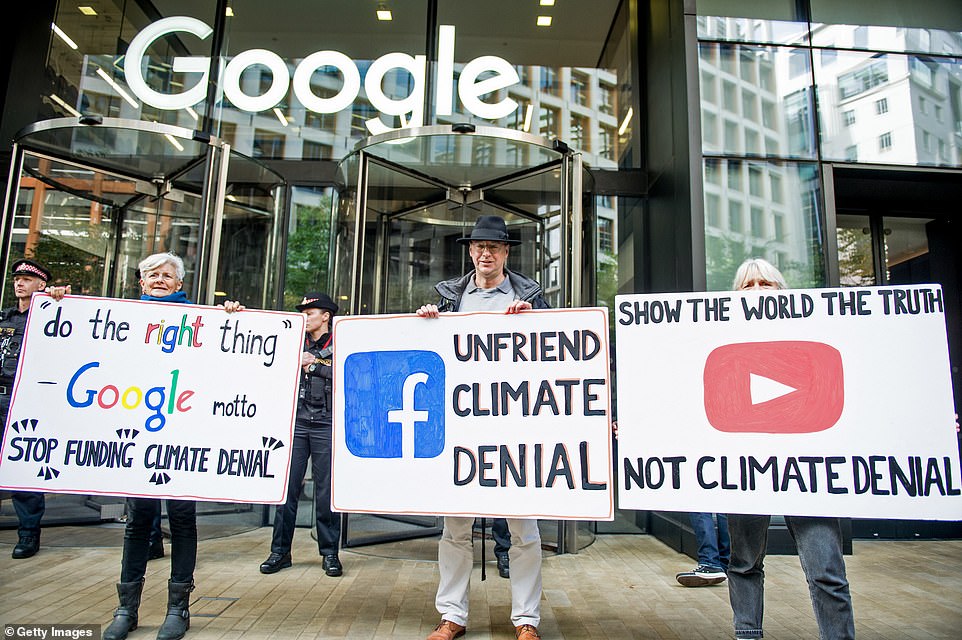 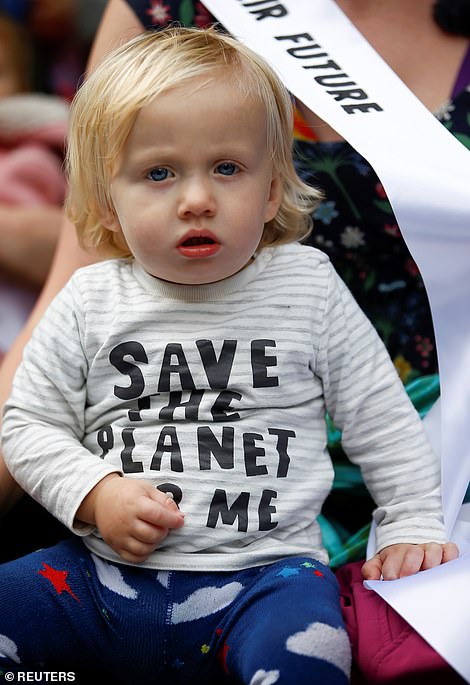 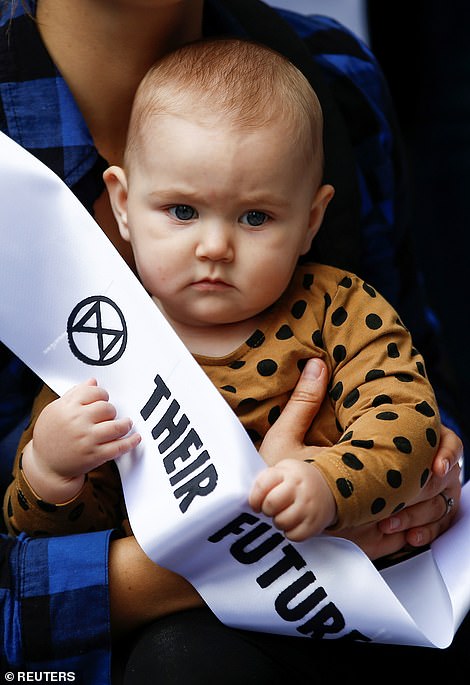 Demonstrators, including mothers and babies, take part in a protest organised by Extinction Rebellion, outside of the doors of the Google offices in London 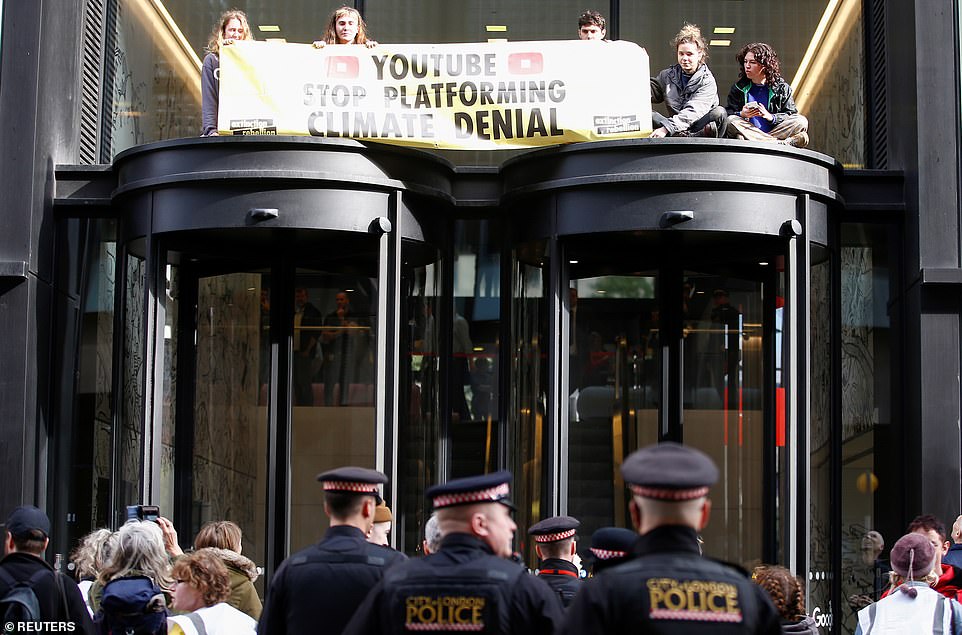 Demonstrators are seen on the top of the entrance during a protest organised by Extinction Rebellion, outside of the doors of the Google offices in London