Mary Selassie, 42, is taking the underground from Ealing Broadway to Westminster, the closest station to St Thomas’ hospital in South London where her son Elhan is being treated in a specialist intensive care unit after being born three months early

A special needs teacher told MailOnline he has quit work because of the dangers of contracting coronavirus while travelling on packed tubes, while the mother of a premature baby has revealed that she was worried about taking the Tube but had little choice if she wanted to visit her newly arrived son in hospital.

Mary Selassie, 42, was taking the underground from Ealing Broadway to Westminster, the closest station to St Thomas’ hospital in South London where her son Elhan is being treated in a specialist intensive care unit after being born three months early. The journey takes around an hour.

She told MailOnline: ‘I need the underground at this time because without it I would not be able to spend time with my son. I’ve been doing this journey for the past three weeks and in the last few days the service has not been as regular. I don’t understand why they are reducing the number of trains because it just means that we have to wait for longer.

‘Many other people are in the same difficult position as me. They’re getting the tube because they have to. Of course I’m worried because there’s a very high chance that I could become infected using public transport and then I definitely would not be able to see my baby. This is just adding to my stress.’

Edvaldo DaSilva, 42, said he had tried and failed to find space to board the underground on Monday and Tuesday and today decided to stay at home.

Mr DaSilva said: ‘I normally leave my home at Bethnal green and take the tube at around 7 am. ‘ Last week it was fine and I was able to get on to the trains. ‘

But on Monday and Tuesday it was impossible because their were less trains running than before.

‘The platform was packed and the trains took about 15 minutes to arrive and then I couldn’t get on. I looked at everybody on the trains and I thought ‘they’re breathing all over each other. This is so dangerous’.

‘We are supposed to be keeping two meters from people and now that they are less trains, people are being pushed together even more and it’s dangerous for our health.

‘I saw passengers with their faces stuck next to others and it was terrible. It just needs one person on the train to have coronavirus and everybody is at risk.’

Mr DaSilva, who works at the Riverside School in Wood Green, added: ‘This is not acceptable. It’s really hard for me because I teach vulnerable young people life skills and I must be allowed to do my job.

‘But my boss understands and now the government needs to understand. These tube trains are very dangerous for everyone staff and passengers. Something has to be done.

‘They need to put new trains on or restrict people travelling. It’s so dangerous and opposite to what we are being told by the Government. I feel very sorry for those people who have to ride on those tubes so closely together. It is not right.’

Ana Gomes, 40 and Carlos Maestu, 51 were taking the central line from Ealing Broadway to West Acton following a shopping trip to a supermarket. 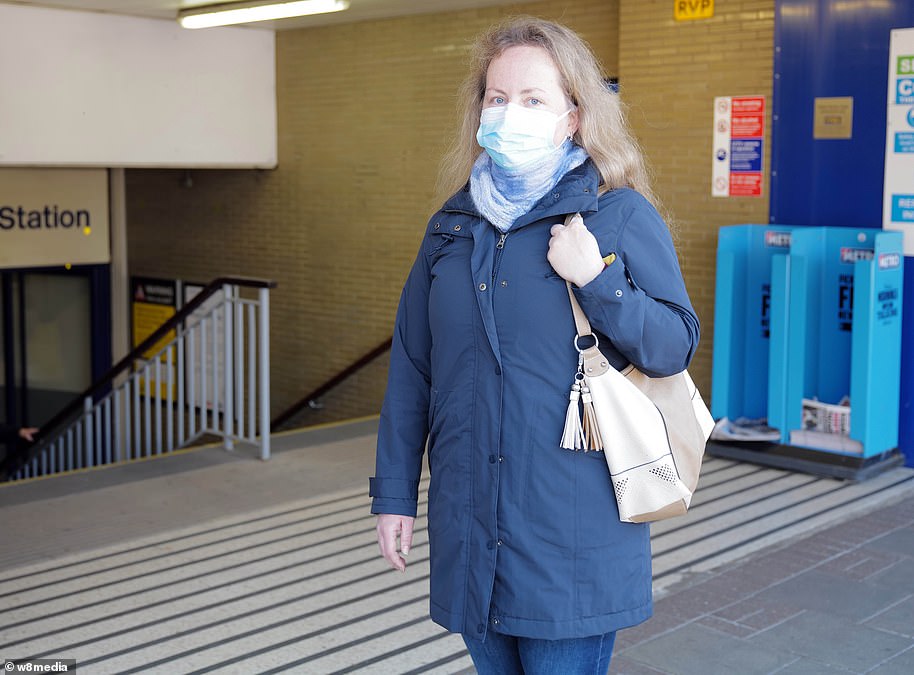 Ernesta Juskatie, 38, a dental nurse, is taking the underground to get to work

Ms Gomes, a waitress who is currently at home after the restaurant she works in closed, said: ‘We don’t want to get the tube, but we have to. The nearest supermarket to us is here in Ealing Broadway. Both of us are taking all the precautions we can, we’d rather not use public transport but what else are we supposed to do?

Spaniard Mr Maestu, a chef, who is also at home following the closure of the central London restaurant he works in added: ‘In Spain the lockdown is much tougher than in Britain. If you ask me, they need to shut down all public transport except to essential workers because there are still too many people out and about.

‘If they did close the tube it would be a big problem for me, but you can’t just think about yourself in a time like this.’

Ernesta Juskatie, 38, a dental nurse revealed that she was taking the underground to get to work.

She added: ‘The practice where I work is still open, so I don’t have much choice. When I’m on the underground, I don’t sit, and I don’t touch anything. I know that might not be enough to stop me getting infected but I’m doing all that I can.

‘Personally, I hope they close the whole network down, except for those who really need to get to work, like NHS staff. That way I would have no choice but to stay at home.’

Kim Black, 48, a child protection social worker from Oxford said that she was taking the underground to Paddington to catch a train to her home.

She added: ‘This is my last day at work and then I’ll be working from home. I just came into London to collect a laptop from my work and sort out some paperwork.

‘It’s actually quite pleasant commuting from Oxford at the moment because normally, you don’t even get a seat. The underground needs to keep going; there needs to be an increased service, not a decreased one because there are a lot of people who still need to use it.’