Gordon Ramsay is in talks to take over Rick Stein’s rival restaurant in Porthleven, Cornwall, according to reports.

The TV chef, 53, is keen to expand his business empire and is thought to have his sights set on Rick’s harbour-side eatery which was forced to close amid the coronavirus crisis.

A source told The Sun: ‘Gordon is very interested in taking it over as he feels it has so much potential.

Rumours: Gordon Ramsay is in talks to take over Rick Stein’s rival restaurant in Porthleven, Cornwall, according to report (Gordon and Rick pictured together in 2005)

‘It already has a certain gravitas due to Rick’s association but Gordon believes he can take it up a notch.

‘It’s not a done deal but there’s a good chance he’ll seal the agreement.’

Earlier this month, Rick told customers that the Porthleven restaurant, as well as his establishment in Marlborough, would not be re-opening after the lockdown restrictions were eased. 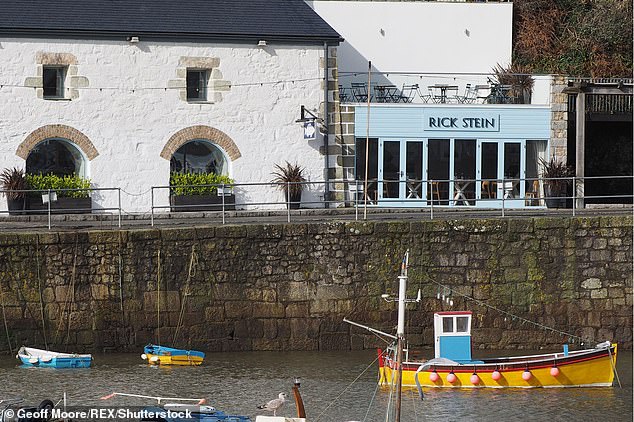 Sadness: Earlier this month, Rick told customers that the harbour-side Porthleven restaurant (pictured) would not be re-opening after the lockdown restrictions were eased 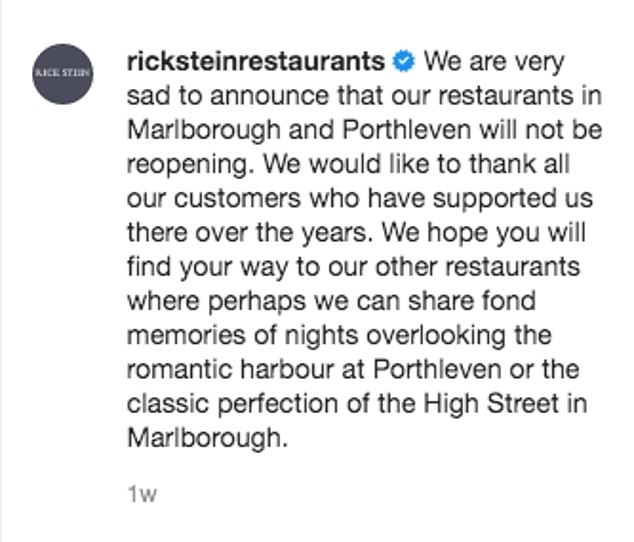 Candid: Taking to his social media pages, he began: ‘We are very sad to announce that our restaurants in Marlborough and Porthleven will not be reopening’

Taking to his social media pages, he wrote: ‘We are very sad to announce that our restaurants in Marlborough and Porthleven will not be reopening.

‘We would like to thank all our customers who have supported us there over the years.

‘We hope you will find your way to our other restaurants where perhaps we can share fond memories of nights overlooking the romantic harbour at Porthleven or the classic perfection of the High Street in Marlborough.’

The majority of its other outlets, including the group’s flagship restaurant in Padstow, Cornwall, remain unaffected.

MailOnline has contacted representatives for both Gordon and Rick for comment.

But the potential deal comes after Gordon angered locals after relocating to his second home in Cornwall during the coronavirus crisis despite the Government urging Britons not to travel.

Last month, the star was spotted a number of times taking long excursions when outings were still limited to an hour a day including a beachside stroll with his entire family.

The fiery chef was accompanied by wife Tana, 45, and three of their five children – Jack, 20, Matilda, 18, and Oscar – during a brisk walk across the sand. 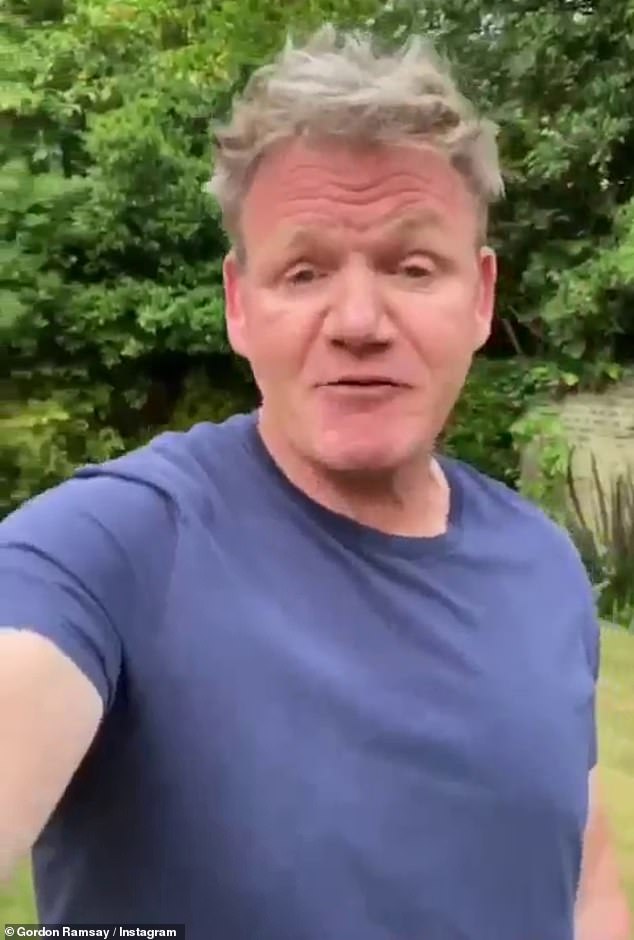 Tough times: But the potential deal comes after Gordon angered locals after relocating to his second home in Cornwall during the coronavirus crisis despite the Government urging Britons not to travel

The Hell’s Kitchen star also landed in hot water with the local coastguard, who are said to have issued an official warning to him over his apparent flouting of lockdown guidelines.

Sources indicate that Gordon has been seen in Rock, Fowey, Port Isaac and Newquay – some distance from his £4million home in Trebetherick.

The warning is particularly troubling because Ramsay is the face of a ‘Stayhome’ initiative on YouTube which he has been plugging on his ten-minute cookery shows, filmed in ‘isolation’ in his Cornwall kitchen. 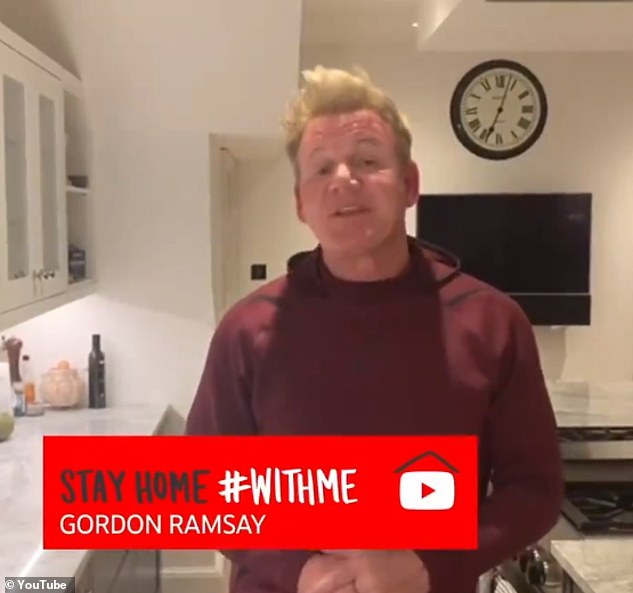 Here we go again: Gordon caused outrage after fronting a new Stay at Home advert, despite ferrying his entire family from London to their lavish second home

A source at the Maritime and Coastguard Agency, whose officers and volunteers carry out regular patrols of the beaches and coastal paths, said: ‘We have reports of him being seen in dozens of different places since lockdown started.

‘He does not seem to be obeying the rules regarding social distancing, exercise and staying at home.

His home, to Newquay, which is 23 miles away, and even at his third Cornish home in Fowey, which is 25 miles away and a 45-minute drive on a good day.

‘One of our staff spoke to him about the frequency with which he was being seen out and about, and the significant distances. After a period of reflection, he seemed to calm himself and took on board what was being conveyed in a most polite manner.’

Appearing from home in his ‘Stay at Home’ YouTube campaign in April, Ramsay urged fans to remain behind closed doors and try some of his recipes until current restrictions are lifted. 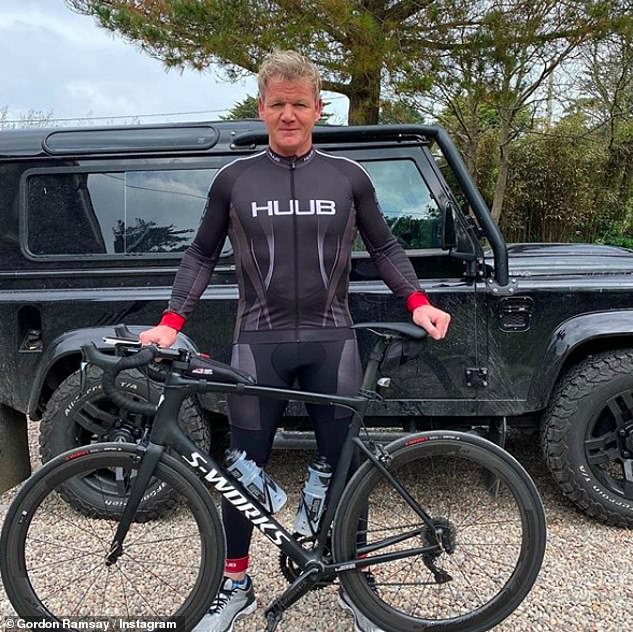 Keeping fit: Gordon was also forced to deny ‘almost causing an accident’ after a local resident accused him of jumping a red light while on a 26.2-mile bike ride

‘Hi, I’m Gordon Ramsay. Now in order to stop this dreadful virus, we need to stay at home,’ he told viewers.

‘What do we do? Let’s cook along together. I’ve got loads of exciting recipes on my YouTube channel. Have fun and thank you.’

Moreover, the TV personality hit yet another stumbling block when he was forced deny ‘almost causing an accident’ after a resident accused him of jumping a red light while on a 26.2-mile bike ride.

In a picture taken by the irate local and obtained by The Sun, he was seen wearing the same cycling gear he wore in a post shared with Instagram followers earlier that day.

Whilst the UK stays in lockdown to slow the spread of COVID-19, the government advice is to ‘stay local and use open spaces near to your home where possible’, though the public can now see up to six people in socially distanced outings.

While people with second homes are not allowed to travel back and forth, choosing one home and sitting out the lockdown in it is not against official advice.

A friend of the family told MailOnline: ‘The family see Cornwall as their family home when the kids are back from uni and Gordon back from filming around the world it’s where they spend all their family time together.

‘They’ve been spending time there for 10 years and Jack actually lives in the house there full time too. Most of their neighbours are so welcoming and they love being part of the community.

‘They’ve been following the government advice along with the rest of the country since they arrived on March 20th and the campaign against them is hurtful and unnecessary at a time when we should all be coming together and supporting each other.’ 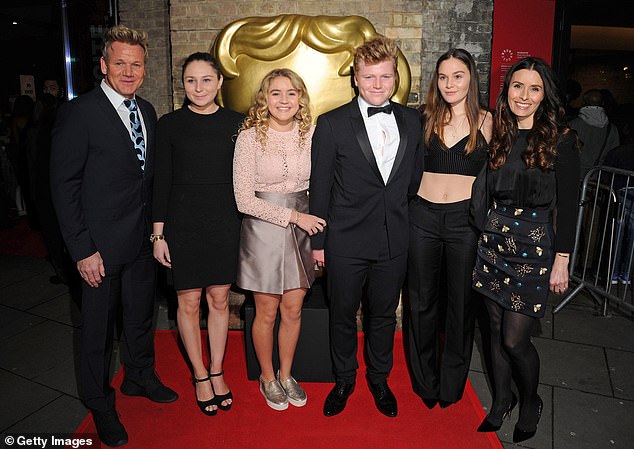 Close family: Gordon has relocated to Cornwall with his family – daughter Megan, 22, twins Jack and Holly, 20, daughter Matilda, 18, and wife Tana, 45 (from left to right)