Four grieving siblings ‘gatecrashed’ their sister’s funeral after it was arranged secretly by her husband who avoided jail despite allowing her to die in agony on the floor for eight weeks.

Neil Crilley went on trial for killing his wife Maureen in September 2017 but his case was found Not Proven – an acquittal used by Scottish juries when there is not enough evidence to convict but they are not sufficiently convinced of the accused’s innocence to find them not guilty.

Crilley then won a court battle that enabled him to secretly bury her, but Maureen’s sisters Katie Friel, Margaret Colquhoun, May Mackie and Helen Jamieson, found out about the date and location and came to pay their respects.

The sisters of Maureen Crilley – from left to right, Kathleen Friel, Helen Jamieson, Margaret Colquhoun and May Mackie – ‘gatecrashed’ her funeral after her husband tried to hold it in secret

The former BAE Systems worker, 77, had wanted to put Maureen, 67, to rest with only himself and one other couple in attendance, but the sisters received a tip off.

Katie Friel, 58, told the Daily Record: ‘We found out from a source when the graveside ceremony was taking place at the last minute and we were able to turn up.

‘Neil just ignored us but we took our place at the gravestone and we were able to throw earth on the coffin. There wasn’t much he could do about it to be honest.

‘We shouldn’t have been forced to do that. It was like gatecrashing our own sister’s funeral was inhuman to deny us the right to be there.’

Crilley admitted to Glasgow High Court that he had ‘totally failed’ his wife, after the jury heard how he refused to call an ambulance until Maureen was close to death.

By that time she had been lying on the floor for eight weeks with bed sores the size of saucers on her back, a broken leg and a brain infected with pus.

She died of spinal meningitis, but the court heard she would have survived if medical treatment had been sought promptly.

The jury cleared him of culpable homicide by majority verdict, resulting in the sisters confronting him as he left court.

His wife’s sisters reacted with fury outside court. Katie Friel shouted at Crilley: ‘You evil b******. You killed my sister.’ Another sister, May Mackie, 68, said: ‘There is no justice for my sister.

‘He left my sister to rot. He left her lying for eight or nine weeks. How could any human being do that? He left her to die.

‘The paramedics and doctors spoke of holes in her back – one the size of a saucer.’

A third sister, Helen Jamieson, said: ‘She was lying there and I live only a short distance away. He could have come round and I would have got help for her.’ 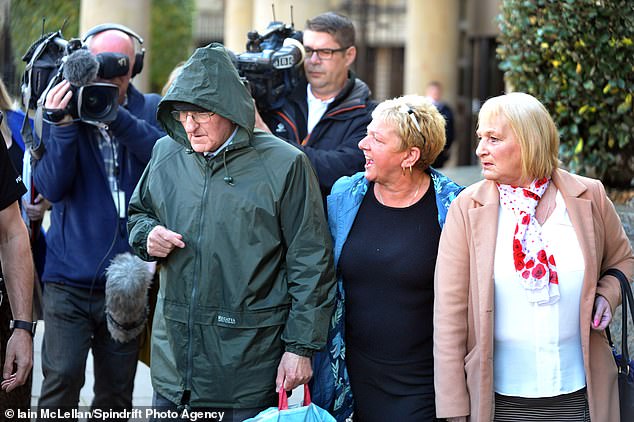 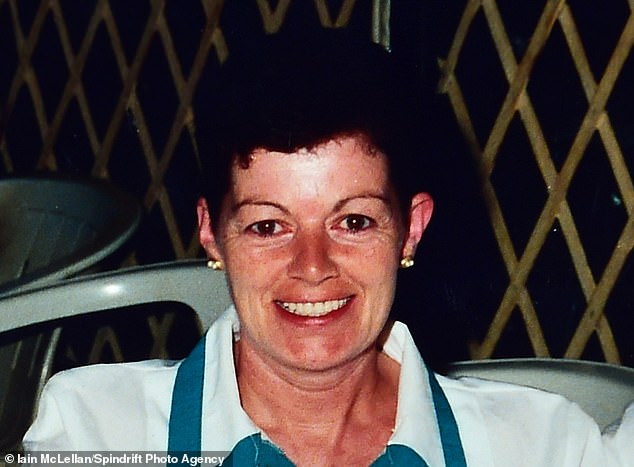 Crilley admitted to Glasgow High Court that he had ‘totally failed’ his wife, (pictured) after the jury heard how he refused to call an ambulance until Maureen was close to death

Kate Friel had booked with Co-Op Funeralcare but the funeral director later told her Crilley had claimed responsibility for her funeral. There was a legal challenge but the sheriff took his side.

Crilley had told the court that his wife had a fear of doctors and needles and begged him not to call emergency services.

When medics arrived at the couple’s home in Clydebank, Dunbartonshire, Mrs Crilley was lying naked on her back with a double fracture of her left leg.

She had two suppurating sores, one the size of a saucer, on her back and died at Glasgow’s Queen Elizabeth University Hospital two days later from spinal meningitis.

In evidence, Crilley said he cooked mince and potatoes and fish cakes for her while she lay on the floor with a broken leg.

He said he had no sense of smell and did not realise how bad her injuries were. He sobbed as he told how he visited her grave every day and spoke to her.

Crilley also told his QC Tony Graham: ‘I look at a picture of her every day and have a chat to her, like I do at her grave. I totally failed her. I didn’t know the pain she was in until I heard the doctor the other day.’ 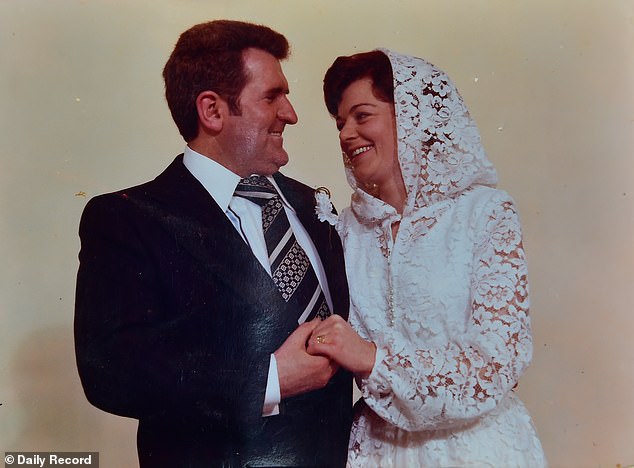 Crilley’s his case was found Not Proven – an acquittal used by Scottish juries when there is not enough evidence to convict but they are not sufficiently convinced of the accused innocence to find them not guilty. He is seen with Maureen in an old family photo

Crilley said his wife had ‘begged’ him not to call an ambulance and added: ‘I knew she fell but I didn’t know if she had a broken leg.’

When asked if he had wanted his wife dead, Mr Crilley replied: ‘No, God, no. Maureen was my life, I will never smile again.

‘I wanted to look after her for the time we had left.’

He told jurors that his wife would hide her illnesses from him to avoid going to the doctor.

In 2009, she broke her kneecap and he said it took him six weeks to persuade her to go to hospital.

Jurors heard a 999 call where Crilley told the operator: ‘My wife fell eight or nine weeks ago in the living room and this can’t go on.

‘She begged me not to phone but she is in terrible need. She is terrified of needles and doesn’t want to go to hospital.’

During the trial, Mrs Crilley’s sisters told the court she had wanted to leave her husband at one time but she was too scared.

The court heard Mrs Friel had said: ‘She wasn’t in touch with anyone and was in the house all the time.’

Prosecutor Richard Goddard, QC, had asked her sister Margaret Colquhoun, 68, if their marriage was happy. She replied: ‘No, she was too frightened.’

Mrs Friel also blamed Crilley for not being able to visit her sister. She said: ‘All the sisters went to visit her when she was in hospital. I touched her head and Neil told a police officer to escort me out as he thought I messed her hair up.’