By Liz Perkins For Mailonline

Former Welsh rugby star Gareth Thomas was moved to tears after he was given an on-stage surprise from his parents after being handed an award to honour him as a sporting inspiration.

Thomas, 45, was so emotional he held his head in his hands as his mother Yvonne and father Barry appeared from backstage as he was given the prestigious accolade at the Mirror Pride of Sports Awards on Thursday night.

Tributes were paid to the ex-rugby international, who pulled on a shirt for rugby union and league during his career, by music legend Sir Elton John, former England rugby star Jason Leonard and ex-Olympic swimmer Mark Foster who all praised his role in breaking the ‘stigma’ around HIV.

Thomas, who came out as gay back in 2009, revealed he was HIV positive in September and is believed to be the first British sportsman to reveal he was living with the virus.

Shocked: Thomas wasn’t expecting his parents to be at the Mirror Pride of Sports Awards ceremony as he thought they were at home looking after his dog in Wales 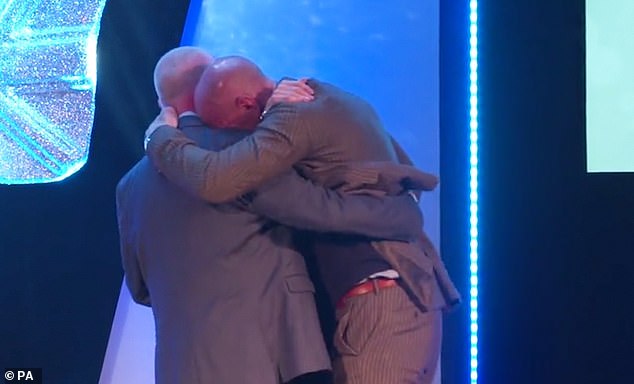 Emotional moment: The former British and Irish Lions captain embraced his family to the applause from the audience

The former British and Irish Lions captain, who starred in 100 test matches, swore and looked taken aback as awards host Ben Shephard announced his parents on to the stage.

Former Cardiff Blues player Thomas, had thought his parents were looking after his dog in Wales, embraced them both and was left wiping away tears as the audience cheered and applauded.

Yvonne joked Thomas had been a ‘pain’ as a child, trying out a number of sports before settling on rugby, something that cost his parents ‘a fortune’.

And Barry revealed it had been ‘very hard’ to see his son go through ‘dark times’ but described him as ‘an inspiration now’.

Thomas told how he feared nobody would accept him after revealing his HIV diagnosis. 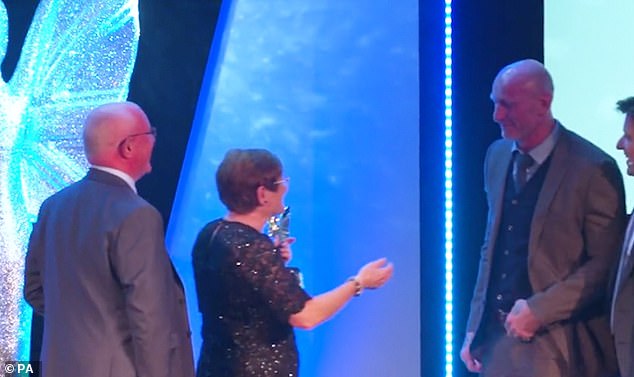 Surprise honour: Thomas’s parents made the presentation of the honour at the special occasion 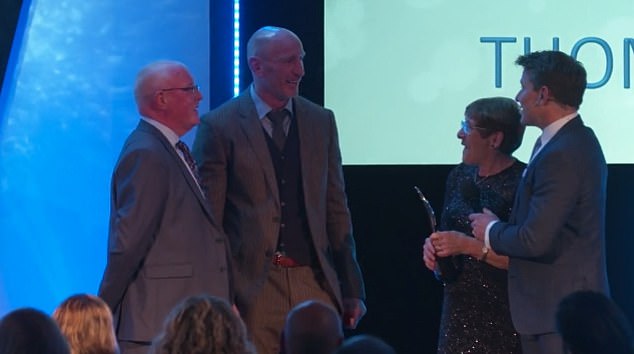 Applaud them: The former sportsman said his parents deserved all the praise and they should get all the applause 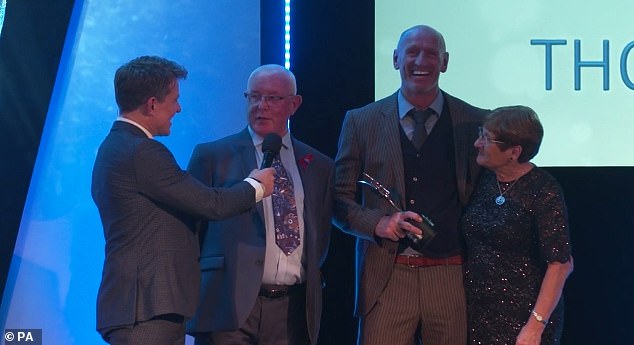 Awarded: The ex-Wales player was awarded for his being a sporting inspiration at the glittering occasion

He said: ‘We are all people and we all have weaknesses and we all have vulnerabilities and people want to prey on them, but what I realise, as athletes the one thing we know is how to fight and how to come out.

‘Having a vulnerability and having a weakness doesn’t make you weak and there was a point where I thought it made me weak.’

He added: ‘If you’re an honest human being, you’re a better human being.’

Thomas said he cared ‘about creating a better society for people’, adding that sport could help inspire future generations.

The ex-rugby star is planning to cycle 500 miles to raise money for Sport Relief as his next challenge and will see him pedal from Cardiff to Aberdeen in a week with the Sports Personality of the Year trophy.

He will deliver the award on stage next Sunday.

Thomas paid tribute to his parents during the ceremony and said he ‘would not be here’ without them, and asked the audience to applaud them instead.

Praising Thomas, Sir Elton said: ‘You are an amazing brave man and you have done so much to change the stigma of HIV and Aids by admitting that you are HIV positive.

‘You are a beacon of hope for so many people out there and I think you are the absolute best.’

Leonard lauded Thomas as a ‘great rugby player’ and an ‘absolute champion’, while Foster, who came out as gay in November 2017, said: ‘I wish I had a role model and someone to look up to like you when I was younger.