Donald Trump walked back on his previous threat, claiming in an Oval Office meeting Tuesday that he would not attack sites that are significant to Iranian culture.

A reporter asked the president during a pool spray with Greek Prime Minister Kyriakos Mitsotakis at the White House if he would target Iranian culture sites in any potential counterattacks.

‘And, you know what, if that’s what the law is – I like to obey the law,’ he said, contradicting a tweet he sent a day after a drone strike he ordered took out Iranian General Qassem Soleimani.

‘But think of it,’ he continued, ‘they kill our people, they blow up our people and then we have to be very gentle with their cultural institutions.’

‘But I’m OK with it, it’s OK with me,’ he insisted. ‘I will say this: If Iran does anything that they shouldn’t be doing, they’re going to be suffering the consequences, and very strongly.’ 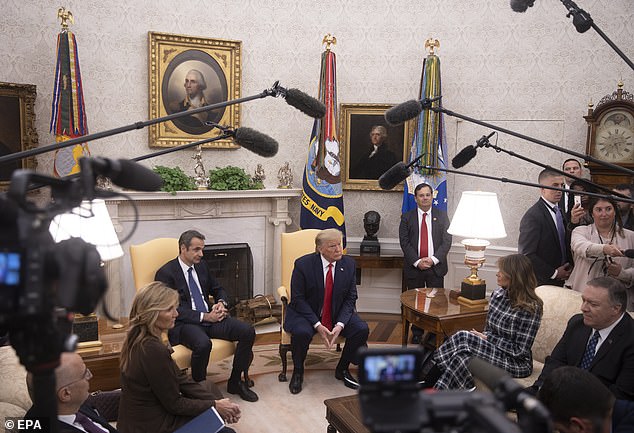 ‘I like to obey the law,’ Trump said during press questioning following his meeting with Greek Prime Minister Kyriakos Mitsotakis 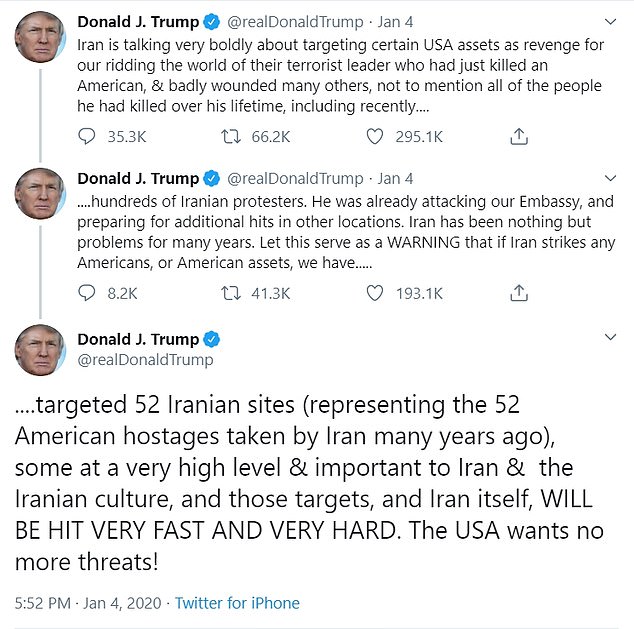 This was a walk back on his threat Saturday where he claimed if Iran attacked Americans, the U.S. would hit back harder by targeting 52 Iranian sites that are ‘important to Iran & the Iranian culture’

Trump warned in a tweet Saturday, just one day after Soleimani was killed, that if Iran retaliated he would target more than 50 sites important to its culture.

‘Let this serve as a WARNING that if Iran strikes any Americans, or American assets, we have targeted 52 Iranian sites (representing the 52 American hostages taken by Iran many years ago), some at a very high level & important to Iran & the Iranian culture, and those targets, and Iran itself, WILL BE HIT VERY FAST AND VERY HARD. The USA wants no more threats!’ he posted in a string of tweets.

Several Democratic lawmakers and politicians accused the president of threatening to commit a war crime with those comments.

The attack on Soleimani came a few days after protesters raided on New Years Eve the U.S. Embassy in Baghdad, Iraq, which had never been breached before. The demonstrators supported pro-Iranian Shia militia groups.

A Fox News reporter in the White House Tuesday asked Trump what the U.S. response would be if Iran engaged in a counterattack for the airstrike that killed one of their top military leaders – who was classified as a terrorist by the U.S. during Barack Obama’s presidency.

‘If you look at what’s going on: Our’s was an attack based on what they did,’ Trump said of his directive to take out Soleimani.

‘We weren’t the first ones out. He killed an American, now two people are dead from the same attack and some people very badly wounded. And that was one of his smaller endeavors,’ Trump recalled.

Trump also said Sunday that the U.S. response to Iran would be ‘disproportionate’ 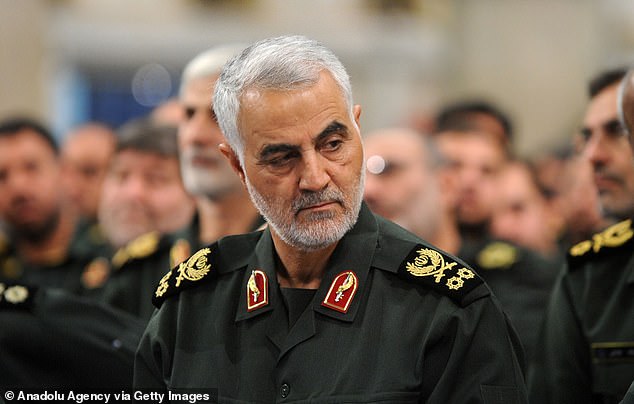 ‘You look over his past, his past – he’s been called a monster and he was a monster. And he’s no longer a monster, he’s dead. And that’s a good thing for a lot of countries,’ he continued.

The White House has insisted the attack was carried out because it received intelligence that Solemani was planning attacks on Americans.

Democrats have demanded the intelligence information be declassified to confirm if an Iranian attack on the U.S. at home or overseas was ‘imminent.’

‘He was planning a very big attack and very bad attack for us, and other people, and we stopped him,’ Trump said. ‘And I don’t think anybody can complain about it. I don’t hear many people – other than politicians who are trying to win the presidency – those are the ones that are complaining, but I don’t hear any anybody else complaining.’