By Holly Bancroft For The Mail On Sunday

Samantha Cameron’s sister has spoken frankly about her agony at suffering a miscarriage, describing how she ‘tumbled into grief’ over the heartbreaking loss.

Emily Sheffield revealed how she was left ‘physically traumatised’ by her loss, which came soon after she was forced out of her job as deputy editor of British Vogue.

Recalling the emotional turmoil of the time, she wrote in The Times magazine: ‘Without my usual work routine for balance and the Vogue girls for support, I tumble into a period of grief.

Devastated: Emily Sheffield revealed that she ‘tumbled into grief’ following a miscarriage

She eventually sought professional counselling, nine months after the traumatic events, and wrote: ‘I urge other women to do so far sooner.’

Ms Sheffield, who is married to actor Tom Mullion, became pregnant at the age of 44, just before the ‘crushingly sad’ loss of her job at the glossy fashion magazine in 2017.

She wrote: ‘I’d been there 13 years. I spent more time with my Vogue team than with my family. When the managing director, Nicholas Coleridge, called me into his office and broke the news, I was furious with myself for crying.

‘I had become pregnant in those last months at Vogue, a shock given I was 44. I decide this is my consolation prize for losing out on the top job and leave feeling excited about the future.

‘In September, just as London Fashion Week begins, I miscarry a week short of my three-month scan. The miscarriage leaves me feeling physically traumatised.’

Ms Sheffield, now 46, has a close relationship with her elder sister Samantha, who was an ambassador for the British Fashion Council before husband David entered Downing Street in 2010. 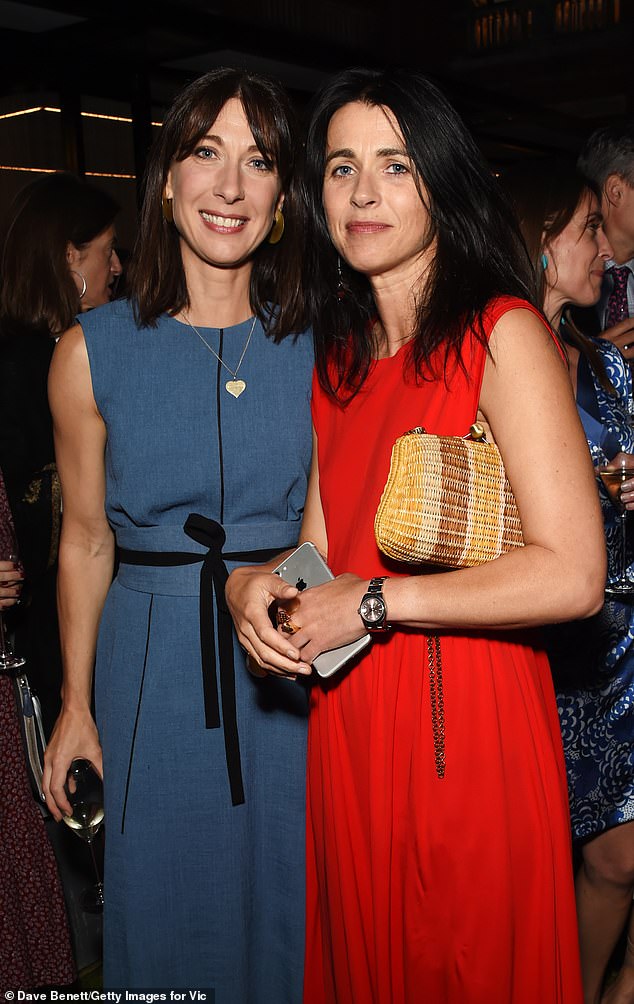 Close: Sisters Samantha Cameron and Emily Sheffield are very close and both have a passion for fashion

She recalled: ‘We often sat on the front row gossiping during London Fashion Week. In Paris, we would sneak off with our British designer friends to chic gay nightclubs.’

But she also spoke of her insecurities in her high-powered job, which she was forced to quit when Edward Enninful took over as editor from Alexandra Shulman.

‘I had two very young children at home and was the main breadwinner, and I often felt I was falling short of being brilliant at either career or motherhood,’ she said.

‘I don’t miss the gnawing anxiety of heading off to the shows never feeling well-dressed enough, as pathetic as that sounds.’

Ms Sheffield’s relationship with her sister led to a major faux pas when Samantha invited her to a fashion party without telling Vogue’s editor-in-chief Anna Wintour.

Ms Sheffield said: ‘Anna clocked me the minute I walked in. Her eye narrowed, I was not even wearing new season clothes.

‘Samantha dragged me over excitedly. I knew this wouldn’t go well. Anna looked me up and down and remained silent before turning swiftly on her Manolos.

‘Honestly, I’d have been deeply disappointed if I hadn’t been Wintour-ed. Within seconds she returned, bringing Emma Watson to meet me… My only career regret is that I was never able to learn directly from Anna while I worked for [publisher] Condé Nast.’

Ms Sheffield has recently started her own web media business, called #ThisMuchIKnow, and admitted that entrepreneurship has been challenging. She said: ‘You feel constantly under siege. You never think you’ve achieved enough. Every decision feels seismic but you make hundreds of them each week until your head throbs.’