Is Singapore Airlines’ £5k A380 ‘Suites’ class the world’s best plane seat? Travel expert tests it and marvels at the ‘surreal’ 50-sq-ft cabin featuring a BED… and the caviar starters

If you pay over £5,000 for a one-way ticket on Singapore Airlines, what do you get for your money?

An awful lot, it turns out – because that huge lump of cash will secure you a ‘Suites’ class cabin, touted as one of the very best passenger aircraft seats available to humanity.

To find out just how good it is, a travel expert from The Points Guy UK put it to the test recently on a flight from London Heathrow to Singapore, and published an eye-popping video of the journey to the aviation site’s YouTube channel.

The lucky reviewer was The Points Guy UK Head of Video Jean Arnas – and his footage begins at Heathrow’s Terminal 2, where he’s taken by buggy to the first-class lounge and then to the gate.

Once on the aircraft – an Airbus A380 – we see him turning left into a first-class cabin wonderland.

He is in seat 1A, one of six suites, and it comes with astonishing perks, such as Krug Champagne, caviar starters, a wardrobe big enough for an adult to fit inside – which Jean hilariously demonstrates – a reclining seat and a bed.

Jean told MailOnline Travel: ‘The space is completely surreal. Having 50 square feet onboard feels super luxurious. And because I had no neighbour next to me they also gave me the other half, so I had 100 square feet to myself.’ 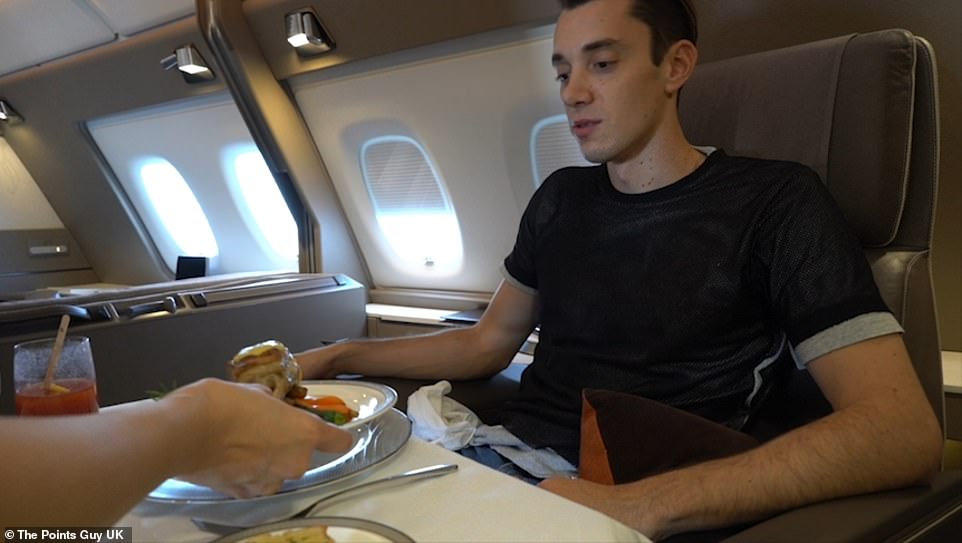 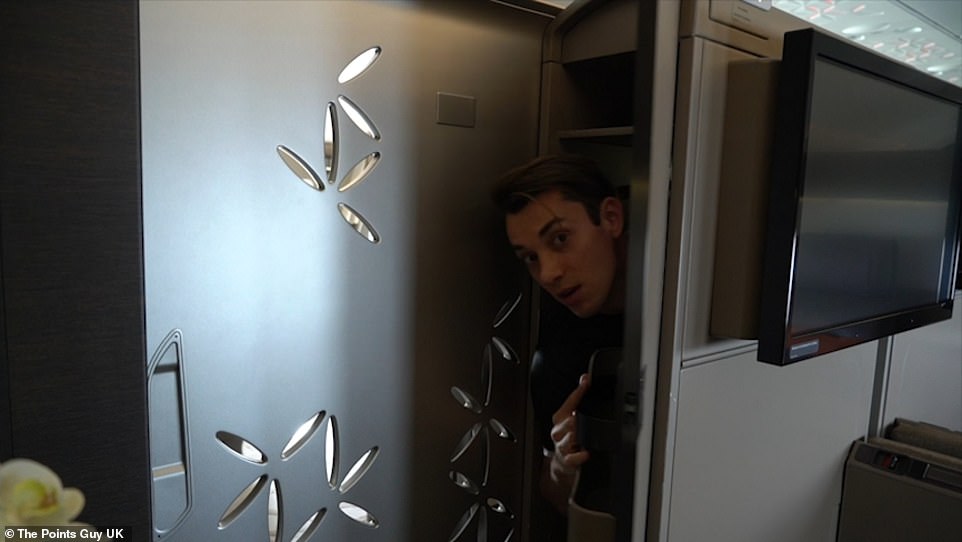 Jean’s suite came with astonishing perks, such as Krug Champagne, caviar starters and a wardrobe big enough for an adult to fit inside – which Jean hilariously demonstrates 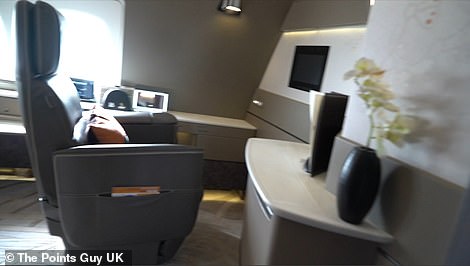 ‘It was the best flight of my life,’ said Jean

The single beds can then be turned into a double bed for couples – or very lucky solo travellers like Jean.

He said that aside from the sheer size of the suite, the best bits of the flight were the service, which he described as ‘incredible, super friendly’, the food and drink, such as ‘fancy salmon and caviar’ and ‘exceptional’ beverages such as Dom Perignon and Krug Champagne, and the airport buggy service, which he said was ‘a fun surprise’.

And any minuses? Yes, apparently.

He continued: ‘There is not a public area to relax in, like the bar that Emirates and Etihad have on the same A380 aircraft, or “The Loft” on Virgin. There are no showers like on the Emirates A380 and Etihad A380. The toilet is really nice but a shower takes things to an outrageous next level.’

However, he still concluded that the suites experience exceeded his expectations. 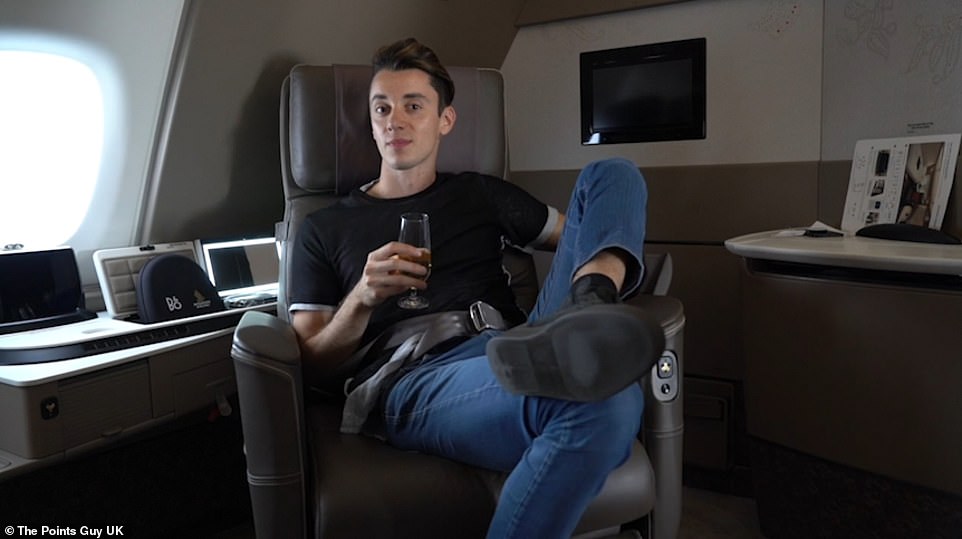 The Suites class cabin comprises six suites, two purely for solo travellers, and four that can be joined together 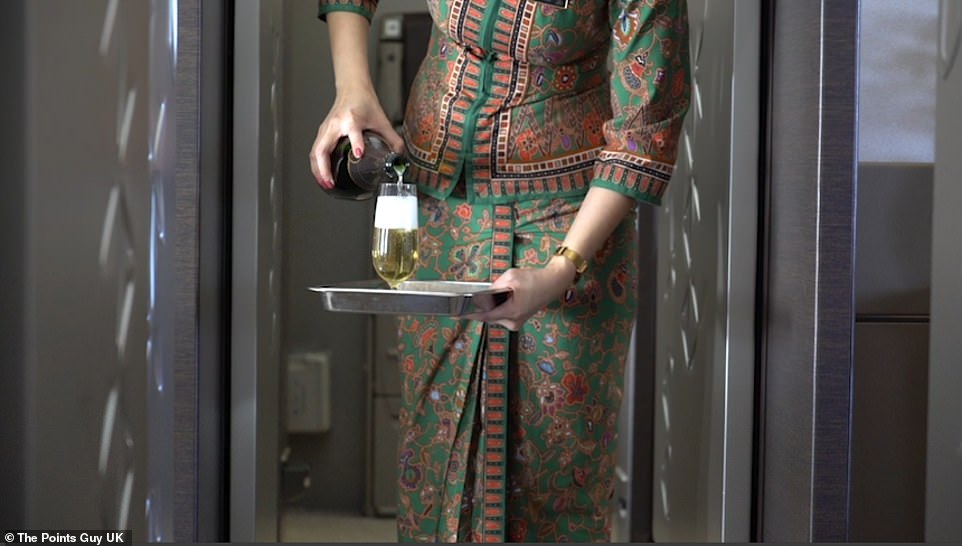 He said: ‘It was better than I was expecting. The crew were even nicer, food was much better, drinks were flowing, and the cabin was bigger than I thought. It was the best flight of my life.’

Whether Suites class represents value for money really depends on whether you’re a millionaire or not.

Though Jean points out that a suites class ticket can be bought for pocket money if you use a big stash of air miles.

He added: ‘Taxes can be minimal especially when starting your journey in Asia. Nicky Kelvin, The Points Guy UK Director of Content flew from Bali via Singapore to London [on suites class] for just £19 and 125,000 KrisFlyer miles [you can learn how to do this here]. One way flights are around £5,000 so you’d really have to have big money to blow for a cash ticket to make sense.’

For more information on travel tips and tricks, sign up to The Points Guy UK.