Len McCluskey, a leading ally of Jeremy Corbyn, has admitted Labour’s Leave-voting heartlands could be the party’s ‘Achilles’ heel’ at the general election.

The general secretary of the Unite union suggested Labour’s stance of staying neutral on Brexit while offering a second referendum was problematic in areas in the north of England and Midlands which voted to Leave the EU in 2016.

He also admitted the party will need to address concerns held by some would-be Labour voters about Mr Corbyn’s leadership if the party is to win the election on December 12.

The Unite union has handed Mr Corbyn a £3 million campaign war chest in a bid to help him secure the keys to Downing Street.

But the comments made by Mr McCluskey to the Huffington Post website suggest even Mr Corbyn’s biggest supporters now concede Labour faces an uphill battle if it is to emerge victorious next week.

Len McCluskey, pictured in London on November 17, said voters in Labour’s heartlands ‘are not quite sure yet’ if they will back the party

Mr McCluskey said: ‘Our Achilles’ heel is in our communities, in what’s known as our heartlands, that voted Leave and are not quite sure yet whether they will give their vote to Labour.

‘If we can engage people listening to what’s on offer, what type of Britain and country we want as we go into the future, then we are on a winner.

‘It’s very much a question of how we do that, whilst at the same time tackling the very real issues we’ve got over Brexit and with Jeremy in some places.’

Mr McCluskey also revealed that a survey of 75,000 Unite members showed there was ‘still a big don’t know group’ when it comes to how they will vote at the ballot box.

While seemingly admitting that Mr Corbyn is a problem for some voters who might otherwise back Labour, Mr McCluskey blamed the media for the poor reception his ally sometimes receives on the doorstep.

He said: ‘I’m not sure how widespread it is, but of course since Jeremy was elected four years ago, he has been consistently [attacked] in a way that I’ve never experienced before.’ 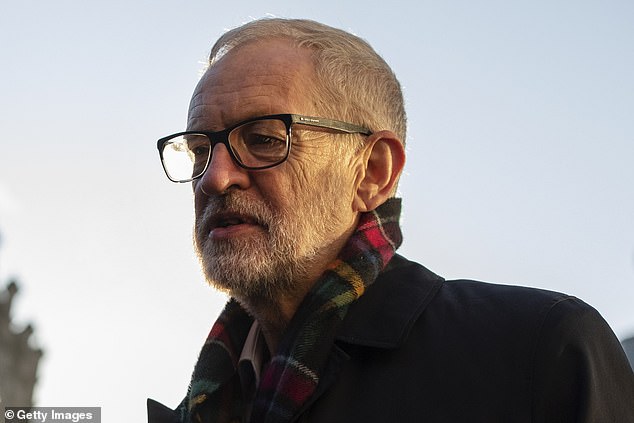 Mr McCluskey also conceded that Jeremy Corbyn’s leadership of the party is a problem for some would-be Labour voters. Mr Corbyn is pictured in London today

A number of opinion polls published in recent days have shown that Labour is gaining ground on the Tories.

But with Boris Johnson still around 10 points ahead of Mr Corbyn in a selection of polls the chances of Labour securing an overall majority on December 12 appear remote.

A massive YouGov poll published last week suggested the Tories are on course to win a 68 seat majority with the party set to pick up 44 seats from Labour’s crumbling ‘red wall’ in Leave-voting areas.