Kate Middleton’s love of marrying high street fashion with designer brands is well documented and it seems the Duchess is taking the same sartorial approach on her royal visit to Pakistan with Prince William this week.

The 37-year-old royal has been widely praised for choosing traditional attire while visiting the country and touched down in Lahore today wearing an ivory-hued shalwar kameez – the tunic and cuffed trousers commonly worn by women, and some men, in the country.

The heavily embroidered design donned by Kate, as the pair jetted in from Islamabad, is from one of Pakistan’s biggest high street retailers, Gul Ahmed, which has been in business in the country since the early 1900s and has 100 shops across Pakistan.

Similar shalwar kameezs on the company’s website currently retail at between just £20 and £50, showing Kate hasn’t lost her eye for thrifty fashion.

The royal finished the look with a shawl by Maheem Khan and Ashen Brown Lucie suede heels from J Crew, which come with a heftier price tag of £244.

Touching down on the red carpet in Lahore, Kate, 37, donned a shalwar kameez – a traditional outfit which combines a tunic-style top with cuffed trousers – by historic Pakistan fashion label Gul Ahmed 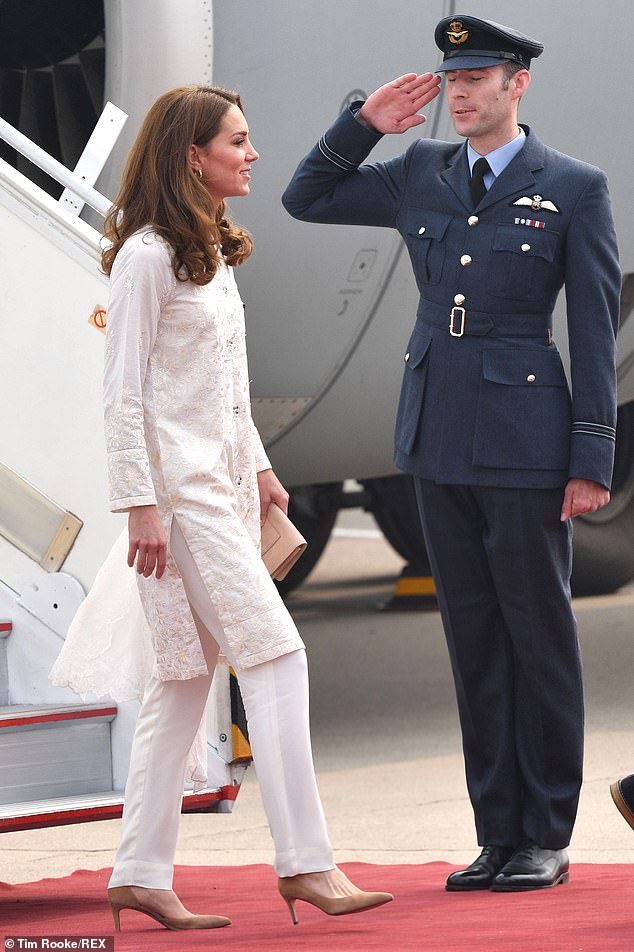 The elegant ivory outfit, which carries heavy embroidery on the tunic, is likely to have cost less than £50 from the high street brand. Kate finished the look with a pair of caramel-coloured suede Lucie heels and a cream leather clutch bag (Pictured: Kate is saluted as she arrives at Lahore airport on Thursday) 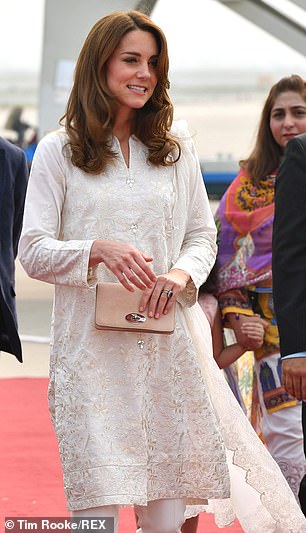 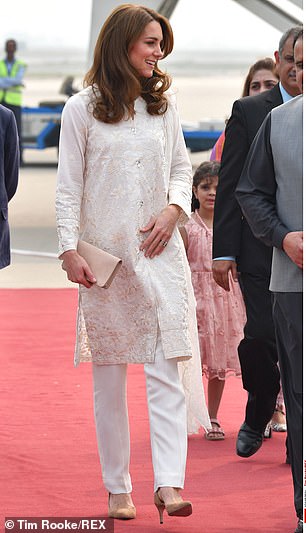 Kate’s shoes, thought to be from upmarket high street brand J Crew, came with a more substantial price tag of £244. The couple will have a private meeting with the Governor of Lahore this morning 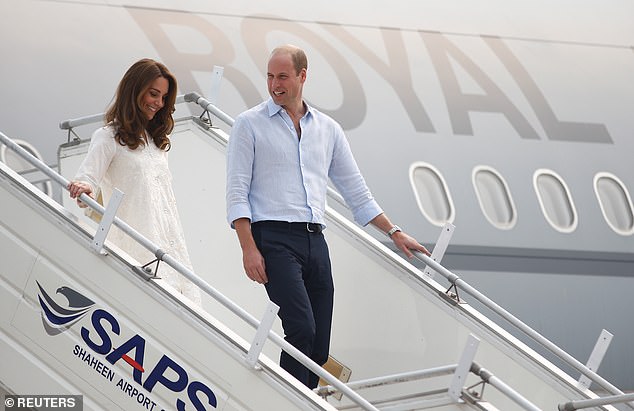 Kate gingerly descends the steps of the couple’s plane as they jet in from Islamabad; William opted for a light blue linen shirt, rolled up at the sleeves and navy chinos for the visit

The Duke and Duchess of Cambridge arrived at Lahore Airport to meet the city’s governor before they undertake an emotional visit to the same cancer hospital visited by Diana in the year before her death.

Kate has emulated the late Princess’ own style during this visit, two days ago she stunned in a blue and white bespoke Catherine Walker – a traditional Pakistani outfit comprised of a flared kurti, a long shirt, and trousers – as she stepped off the British Government’s RAF Voyager plane alongside Prince William.

The Duchess paired the custom look with nude heels and a pearl clutch bag for a seamless look, as the couple became the first royals to visit the troubled nation for 13 years.

Kate’s choice of dress was extremely reminiscent of a similar outfit worn by Princess Diana in 1996, during a visit to The Shaukat Khanum Memorial Hospital, Lahore, in Pakistan, where the couple will visit today.

Yesterday, the Duchess opted for a more rustic outfit as the royals headed to the Hindu Kush mountains to visit the Kalash people.

Kate wore a leather utility vest by Really Wild, layered over a brown shirt, finished off with a tan skirt and chocolate knee-high boots, also by Really Wild, which retail at £315. 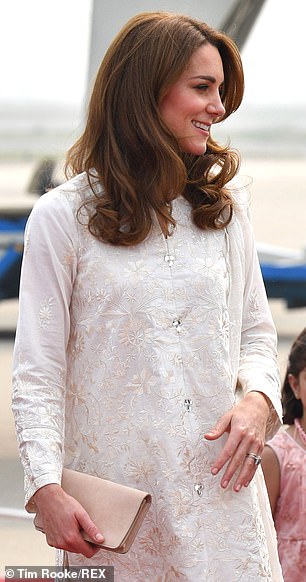 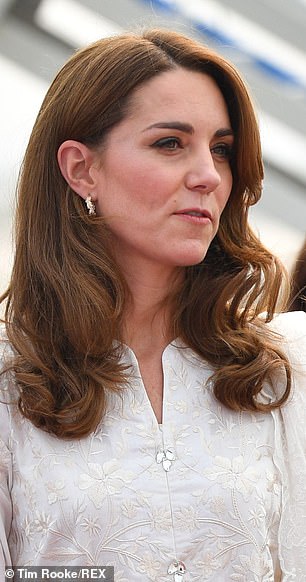 Kate wore a white shalwar kameez – a traditional outfit of a long tunic and trousers – by Gul Ahmed, in Lahore today 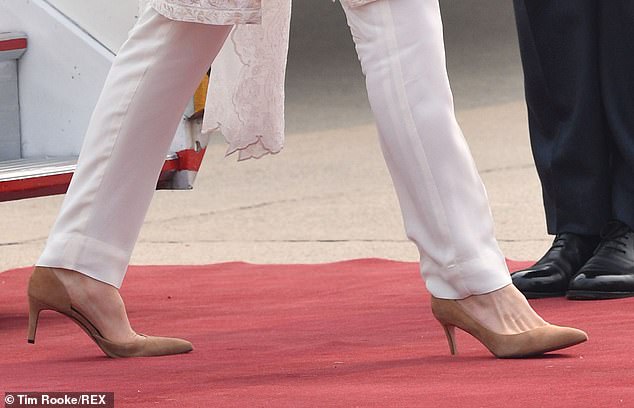 Kate’s Ashen Brown Lucie shoes from J Crew which eclipsed the rest of her outfit in the shoe stakes, with a price tag of £244 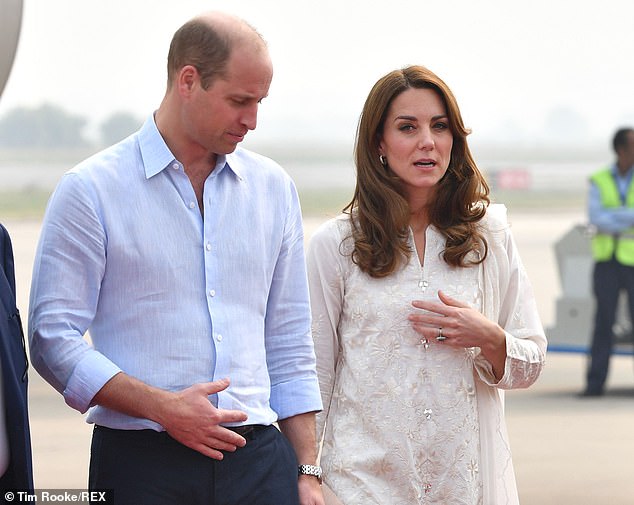 On their final day in Pakistan today, the couple were greeted by officials and a posy of flowers before going into the airport terminal for a private meeting with the Governor of Lahore, and the Duchess looked ethereal in ivory as she arrived.

Later, at the state-of-the-art cancer facility located in the centre of Lahore, they will visit the children’s ward to spend time with patients undergoing treatment at the hospital, and will speak to a number of their families.

The hospital was built by the now Pakistani Prime Minister, former cricketer Imran Khan, in memory of his late mother who died from cancer in 1985.

During his mother’s illness, he witnessed the plight of poor cancer patients in his country’s hospitals and vowed to build a facility that would be accessible to all, regardless of the status.

The centre opened its doors in 1994 and in February 1996, 18 months before her tragic death, Diana, Princess of Wales visited accompanied by Mr Khan and his former wife, Jemima Goldsmith, a close friend of the royal. 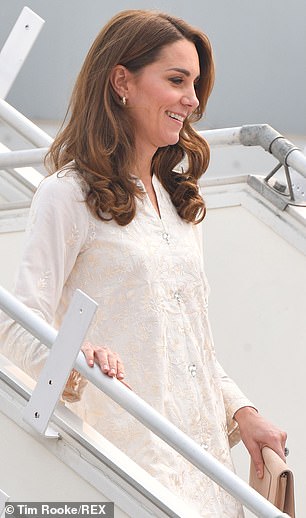 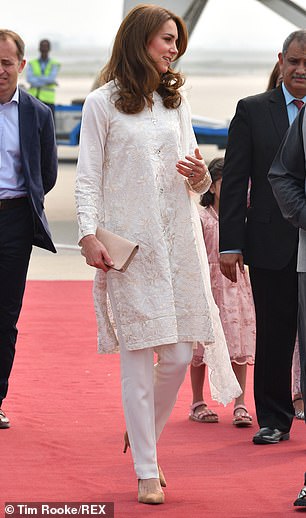 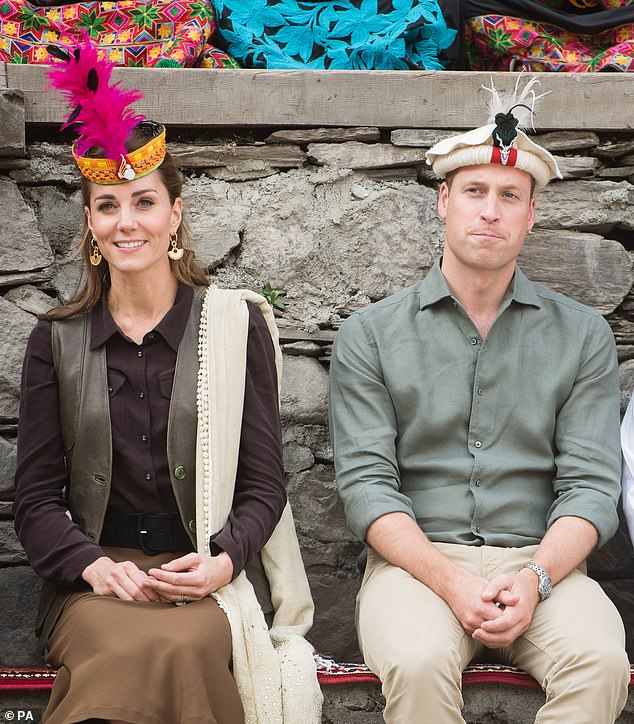 Kate chose a more rustic outfit, including a leather waistcoat as she and William headed to the mountains, visiting a settlement of the Kalash people on the third day of their Pakistani tour on Wednesday 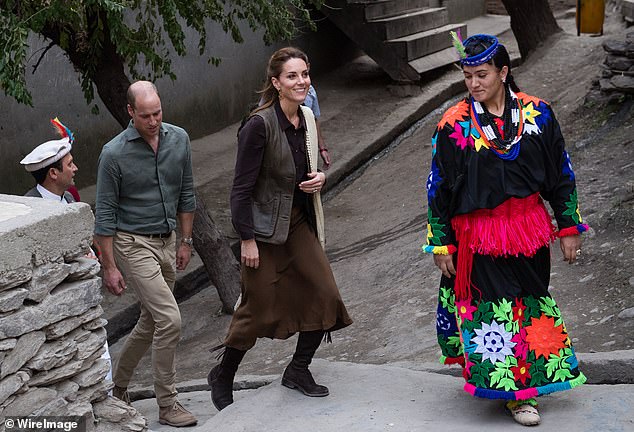 The Duchess of Cambridge wore an entirely chocolate brown outfit, with sturdy suede boots, as she was  led around the settlement of the Kalash people 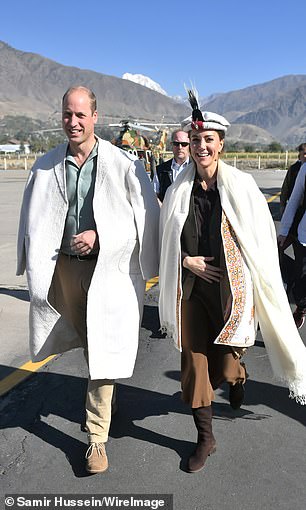 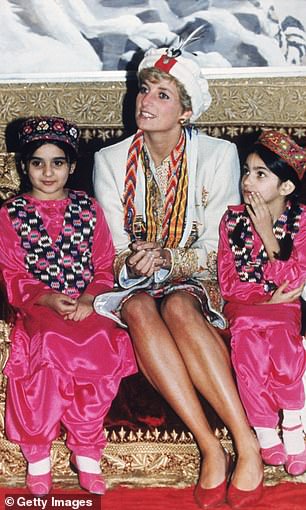 The Duchess of Cambridge (left) was the image of Princess Diana  (pictured in 1991, right) when she and Prince William arrived in northern Pakistan to visit the Himalayan foothills on the second day of their tour earlier this week

The day began with the Duke and Duchess visiting SOS Children’s Village, a charitable organisation in the heart of the city established in 1977.

The Village, which is attached to a school, provides a home and family structure to over 150 young girls and boys, and promotes the development of children into happy, confident and resilient adults.

William and Kate will join a birthday party for one of the children, which will involve games, music and traditional Pakistani cakes, and the duchess will say a few words, her first speech of the five-day tour.

Their next engagement will shine a light on Pakistan’s national game – cricket – as Their Royal Highnesses visit the National Cricket Academy in Lahore.

Here, the Duke and Duchess will join a match with children who are participating in the British Council’s DOSTI programme – Dosti means friendship in Urdu. 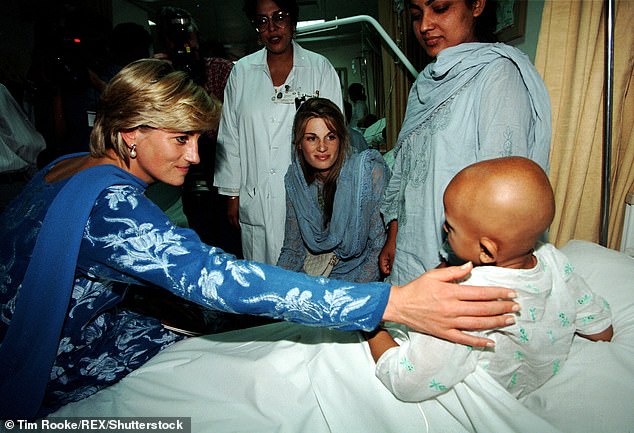 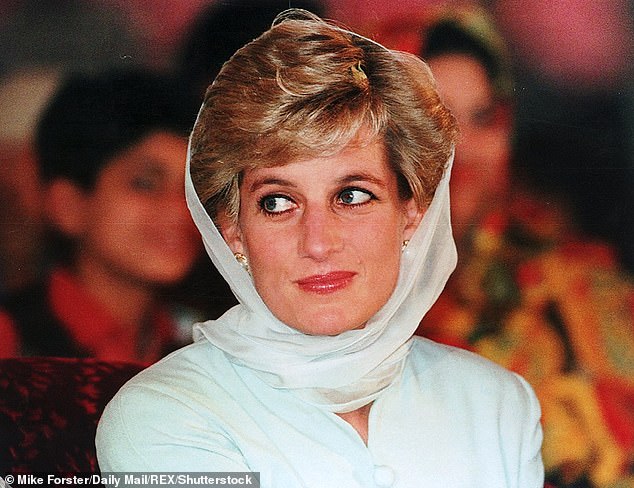 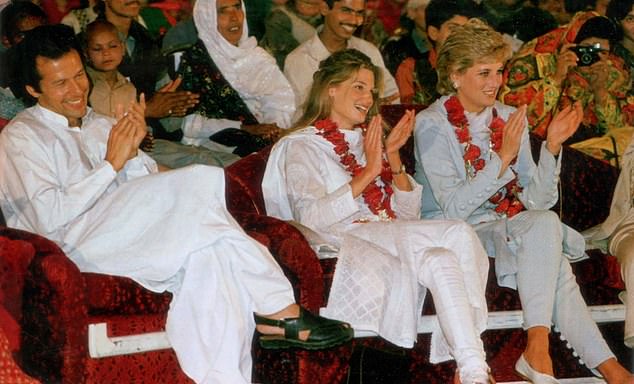 The hospital was founded by former international cricketer Imran Khan, now the Pakistani Prime Minister. Khan, pictured left, is seen here with his then wife Jemima and Diana on her visit in 1996 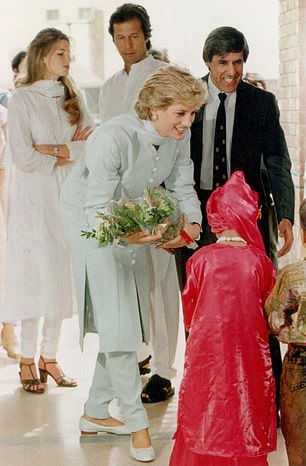 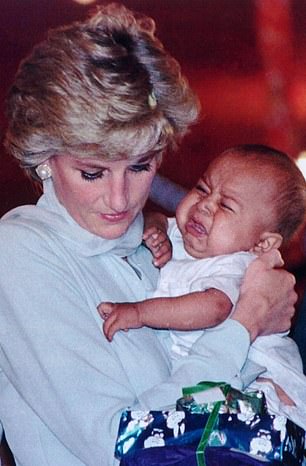 Jemima, now Jemima Goldsmith, watches on with her then-husband Imran Khan during Diana’s visit to the hospital in 1996

The programme promotes sport as an integral part of child development, and encourages social integration, increased self-esteem, and the development of important life skills in children.

They will also have the opportunity to meet a number of Pakistan’s cricketing legends at this event.

Later William and Kate will visit the Badshahi Mosque, the most iconic Islamic site in Lahore, set in the heart of the Walled City.

The royals will tour the mosque and courtyard, before joining a discussion with faith leaders to understand how they are promoting interfaith harmony within their communities.