Kim Jong-un tears down ‘eyesore’ tourist site: Dictator sends in the bulldozers after visiting ‘shabby’ South Korean-built resort 11 years after it was wound down when a tourist was shot dead

By Tim Stickings For Mailonline and Afp

Kim Jong-un has sent in the bulldozers to a North Korean tourist resort near the DMZ after savaging the South’s ‘shabby’ building work.

The dictator wants South Korean-built hotels demolished and replaced after describing them as ‘very backward’ on a visit to the Mount Kumgang complex.

The mountain resort opened in 1998 to encourage cross-border tourism but the arrangement ended in acrimony when a South Korean tourist was shot dead by a soldier there in 2008.

Since then, sanctions on Pyongyang have prevented South Koreans from visiting, but both countries have expressed hope of resuming tours.

However, Kim has now demanded a revamp after visiting the site and lambasting it as ‘just a hotchpotch with no national character at all’, the North’s official KCNA news agency reported.

Unimpressed: North Korean dictator Kim Jong-un visits the Mount Kumgang resort near the DMZ – a trip which prompted him to order the demolition of Southern-built facilities 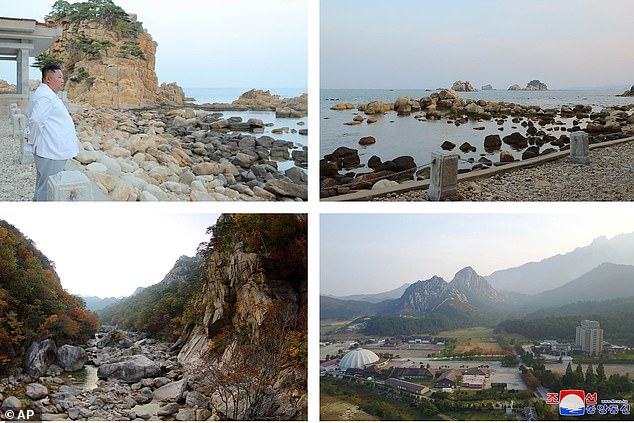 Inspection: Kim has visited the derelict site and lambasted it as ‘just a hotchpotch with no national character at all’, ordering buildings replaced

The unimpressed despot said the buildings ‘were built like makeshift tents in a disaster-stricken area or isolation wards’ and ‘very backward in terms of architecture’.

‘He instructed to remove all the unpleasant-looking facilities of the south side,’ KCNA said, ‘and to build new modern service facilities our own way’.

Inspecting the tourist spot on the east coast of North Korea, Kim said it was a ‘mistaken idea’ for Mt Kumgang to be viewed as a symbol of North-South relations.

‘The resort is North Korean soil, and tourism there must not be under the control of South Korea,’ Kim said.

‘Mount Kumgang is our land won at the cost of blood and even a cliff and a tree on it are associated with our sovereignty and dignity,’ he said.

The announcement is a striking rejection of what was once one of the biggest inter-Korean projects, along with the now-shuttered Kaesong Industrial Complex, where Southern companies employed North Korean workers.

It came only a day after the South’s President Moon Jae-in – who has long championed engagement with the North – touted the benefits of a possible ‘peace economy’ in a speech to Seoul’s parliament.

But contact between the neighbours stalled after the collapse of a February summit between Kim and US President Donald Trump in Hanoi.

Since then, Pyongyang has repeatedly taken aim at Seoul, saying it has ‘nothing to talk [about] any more’ with the South. 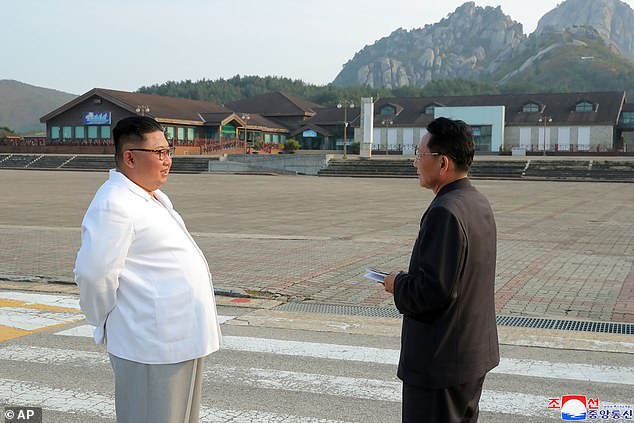 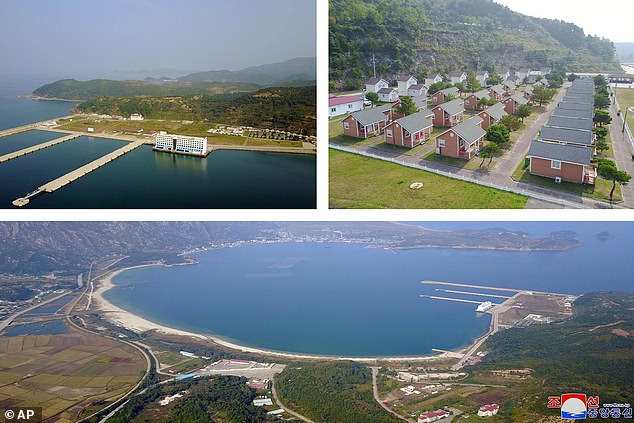 Seoul’s presidential office said it would ‘analyse Pyongyang’s position and its plans’, with an official telling reporters it would seek to ‘consult with the North on areas that can be discussed’.

The resort’s developer Hyundai Asan is part of the Hyundai Group, whose founder Chung Ju-young was born in the North and which has been at the forefront of inter-Korean economic projects.

Road and rail connections across the DMZ have been effectively closed since 53-year-old Park Wang-ja was shot at the resort in 2008.

North Korean officials claimed they had shouted warnings at the tourist when she wandered into a military area.

However, the South said Park had been standing still and suspended all tours, while businessmen who ran restaurants and souvenir shops lost their assets to the North.

Kim and Moon have both called for Mount Kumgang to re-open but it is rare for anyone to cross the heavily armed land border, with most defectors from North Korea travelling through China instead.

The U.S.-led United Nations Command, which oversees affairs in the DMZ, has previously refused to allow even a test train to cross the border.

More than a million South Koreans had visited the resort in the 10 years before the deadly shooting.

The site had been a valuable source of income for North Korea, with tourists charged for entry and the government taking a cut of food and accommodation costs.