Labour supporters subject ex-Arsenal star Lee Dixon with a barrage of foul-mouthed abuse, calling him ‘Tory scum’ after he revealed he would not be voting for Jeremy Corbyn

Former Arsenal defender turned football pundit Lee Dixon has been savaged by Corbynistas on Twitter after saying he wasn’t voting for Labour, despite saying he is voting for the Greens.

The England international has been branded ‘Tory scum’ after replying to a Jeremy Corbyn tweet.

But Dixon, an ITV football analyst, replied: ‘No. There you go. My tweet back.’

The response drove Corbyn supporters to brand him a ‘Tory c**t’ and ‘scum’ who has turned his back on working-class people.

But the angry mob had not checked an earlier tweet sent by Dixon just 15 minutes before which said he would be voting Green. 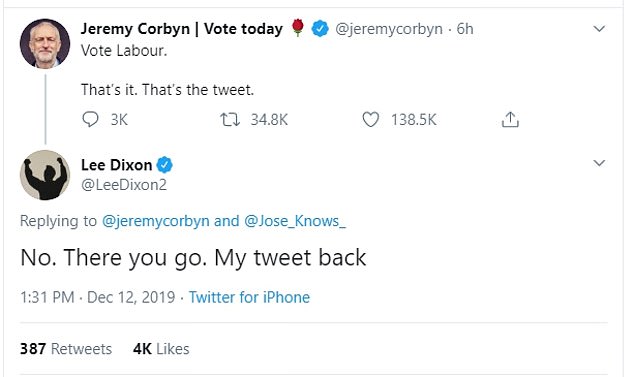 Just 15 minutes before Dixon replied to Corbyn, he replied to another person saying he was voting for the Greens

Labour supporters used a variety of insults to abuse Dixon, saying he had turned his back on working class people, he wanted to avoid paying tax and he hated the poor.

They assumed he would be voting for Boris Johnson without checking his previous tweet where he declared his support for the Greens.

The mistake led to many comparing Dixon to other footballers who came out in support of Labour including fellow pundits Gary Neville and Jamie Carragher, and current Arsenal right-back Hector Bellerin. 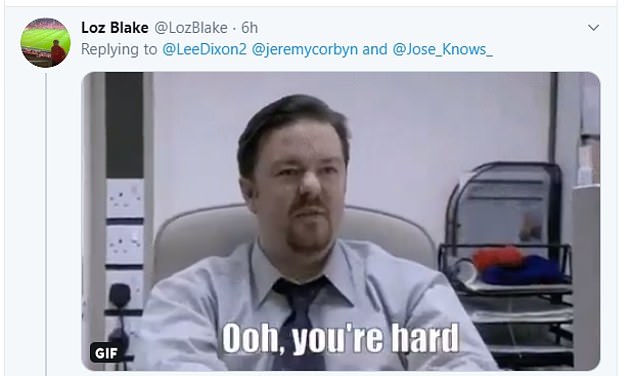 Bellerin said: ‘Young people across the world have a chance to change what the future can be.

‘Today’s the chance for all the British people to influence what your future & those living here holds. #F**kBoris #GoVote.’ 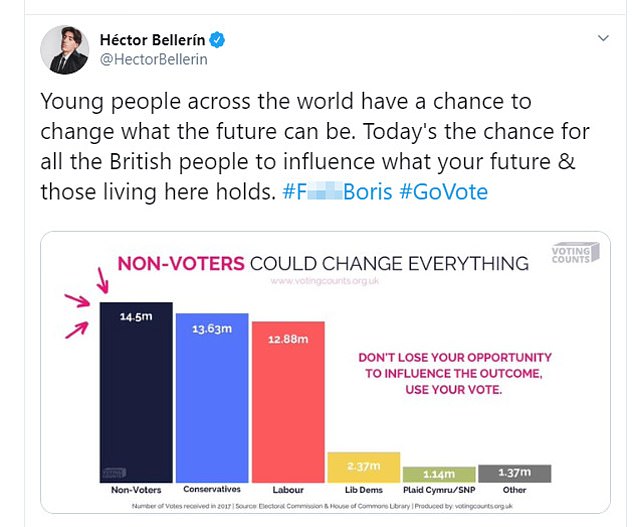 Grime star Stormzy said in a video message to his 1.3million followers today it was ‘clear’ that Jeremy Corbyn should lead the country, calling him a ‘man of hope’, and said anyone who votes for Boris Johnson is ‘stupid’, calling the Tory leader a ‘f***ing p***k’.

Mr Corbyn replied: ‘Thank you Stormzy for your solidarity, your commitment to a fairer country and fearlessness in speaking out against injustice’.

Singers Lily Allen, Paloma Faith and Jade Thirlwall, Game of Thrones actress Maisie Williams, footballers Jamie Carragher and Gary Neville, comedian John Bishop and even Hollywood star Danny DeVito are among the dozens of celebrities who have urged Britain to make Mr Corbyn the next PM on polling day.

Former Westlife singer Brian McFadden was among the critics of so-called ‘luvvies’, blasting them as ‘uneducated celebrities’, and saying: ‘If you’re going to vote today please educate yourself.

‘Don’t vote for who some uneducated celebrities tell you to vote for. Don’t jump on the bandwagon.’