The Duchess of Sussex today showcased her work for female empowerment before attending the opening ceremony of the One Young World summit tonight.

Meghan’s appearance at the Royal Albert Hall without Prince Harry comes days after she opened up about the difficulties she has faced over the past year as a royal.

The event in Kensington, West London, is described as a ‘global forum for young leaders’ and will bring together 2,000 people from more than 190 countries.

Ahead of the event, Harry and Meghan’s official Instagram account posted of video of the Duchess speaking at a previous event about empowering women.

She said: ‘I think what scares people is this idea female empowerment is somehow threatening. No, it’s not. Empower the women, you’re empowering the community.

‘And I think anything is possible, because with my small voice at 11 years old, we could do it – so I can only imagine what all of you are going to be able to do.’

Tom Bradby speaks to Meghan on Harry & Meghan: An African Journey on ITV on Sunday night

It comes after Meghan said in an emotional ITV interview that she tried to cope with the pressures of her new life since marrying Harry in May 2018 with a ‘stiff upper lip’.

The 38-year-old admitted in ITV’s Harry & Meghan: An African Journey she struggled with becoming a new mother under the glare of the media spotlight.

Meghan and Harry are said to have a full schedule of engagements until mid-November before they will take six weeks off from royal duties over Christmas.

It is understood their family time will include them flying to Los Angeles next month to spend the Thanksgiving holiday with Meghan’s mother, Doria Ragland. 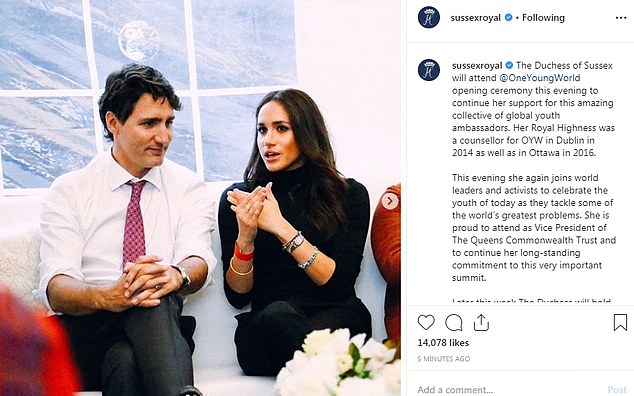 The couple are then expected to spend their first Christmas with their son Archie, who was born in May, with the Queen and other royals at Sandringham in Norfolk.

Meghan is vice-president of the Queen’s Commonwealth Trust, which is partnering with One Young World to bring 53 young leaders to the summit event tonight.

According to the One Young World website, Meghan is a ‘long-standing supporter’ of the organisation, having joined as a counsellor at the 2014 summit in Dublin.

During that event, she addressed young leaders on the importance of women’s rights and the role men play in achieving equality, the group’s website said. 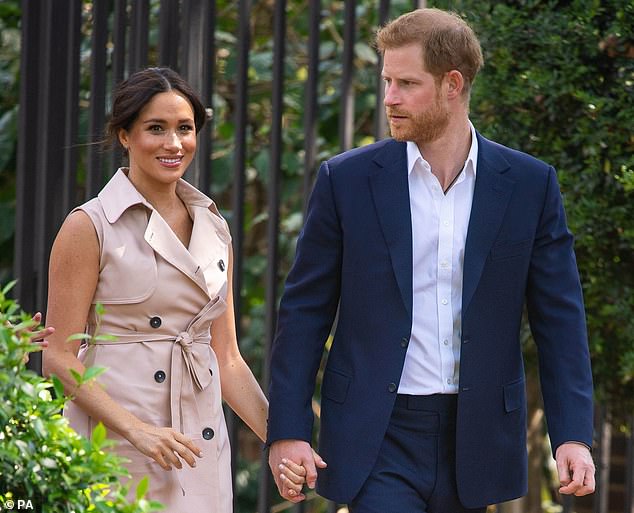 One Young World said its ‘mission’ is to create the next generation of ‘more responsible and effective leadership’.

The event comes after it emerged Prince William and Harry have spoken to each other privately after Harry and Meghan bared their souls in the emotional interview.

Royal aides are said to have ‘concern’ about Harry and Meghan’s struggles, with William believed to be ‘worried’ about his brother who he feels is in a ‘fragile place’.

Prince Harry spoke of his mental health and relationship with brother William on ITV, saying they have ‘good days’ and ‘bad days’ and are travelling on ‘different paths’. 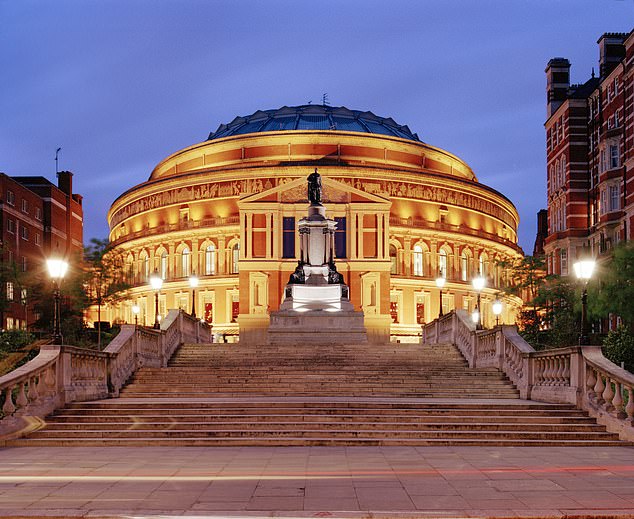 The opening ceremony will take place at the Royal Albert Hall in Kensington, West London

Meghan revealed friends had warned her about marrying into the Royal Family, while Harry said he needed ‘constant management’ to deal with the pressures of his life.

It has also emerged that William and Harry have spoken to each other privately following the documentary, although it is not clear if William saw it in advance.

Describing how William felt at seeing his younger brother clearly upset, a senior royal source said: ‘He is concerned, as anyone would be watching the documentary.’

Insiders told the BBC that William was ‘worried’ about his brother and hopes he is ‘all right’.

William is also said to think the suggestion that Harry and Meghan want a six-week break from royal duties is probably a ‘good thing’ as they are in ‘a fragile place’.

But royal sources scotched talk of William being ‘furious’ about the timing of the programme.

ITV began trailing the interview towards the end of William’s own successful tour of Pakistan with his wife Kate.

One said: ‘Actually I just think there is a really deep sadness there. Things will never be the same again, clearly.’ 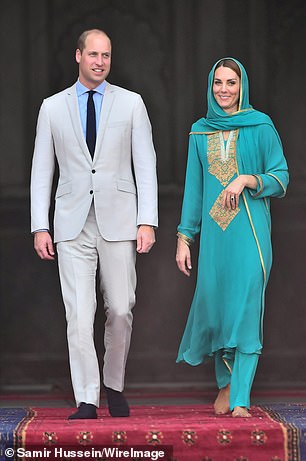 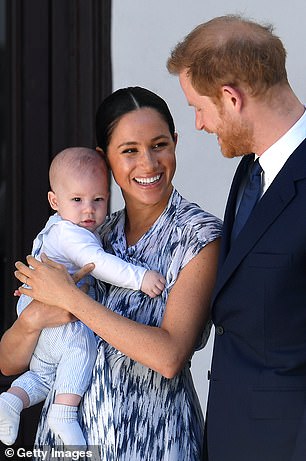 A source said Prince William (left, with his wife Kate in Pakistan last week) hoped Harry and his wife Meghan (right with baby Archie in South Africa last month) were ‘all right’

Meghan received an outpouring of support from tens of thousands of people on Twitter last week after her interview discussing the hardships of motherhood.

#WeLoveYouMeghan’ became the top trending topic on the social media platform, with users offering positive messages in the wake of her media scrutiny.

A royal source told The Sunday Times over the weekend: ‘The Duke and Duchess have a full schedule of engagements and commitments until mid-November, after which they will be taking some much-needed family time.’