This is the moment two Les Miserables actresses confronted a group of drunken men for chanting vile sexist songs on a packed train.

Performers Josie Kemp and Lauren Soley stood up to the booze-swilling passengers after they began the foul-mouthed singing on the 22.40 service from London Marylebone to Banbury.

The group, who were swigging from cans of cider, screamed sexist chants and Ms Soley told PinkNews one of the group remarked ‘urgh f***ing lesbians’ when the couple confronted them.

She claims they also laughed and copied an Indian man’s accent during the spat, which was caught on video at the weekend.

Miss Kemp and Miss Soley took on the thugs with the help of another woman on board – calling the fight back ‘serious girl power.’

Posting the footage to Twitter, Josie captioned it ‘All Aboard the Hate Train.’ 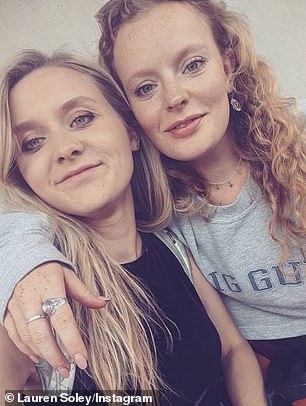 Performers Josie Kemp and Lauren Soley (pictured, right) stood up to the booze-swilling passengers (left) when they began chanting sexist songs on the London Marylebone to Banbury train

She also tagged Chiltern Railways, the Metropolitan Police, London Mayor Sadiq Khan and a number of LGBT organisations in her tweet.

The argument began on the 22.40pm Chiltern Railways service to Banbury, Oxon, on December 7.

Exeter-born Miss Kemp was with her partner Miss Soley, who trained at the Mountview Academy of Theatre Arts and received a Laurence Olivier Bursary in 2014.

She later starred as a street urchin in the production of Les Miserables and has worked as a backing singer for Elaine Paige.

Miss Kemp, who was also in the ensemble for Les Miserables, Tweeted: ‘Last night on a train from LDN to Banbury I experienced something that was truly disgusting.

‘PLEASE watch and share the link below. They should NOT be able to get away with this #racist #sexist #transphobic +.. behaviour.’

And she added: ‘Also huge kudos to my girlfriend @lalalaurensoley for calling these idiots out – what a brave lady I was essentially a camera lady. Give her all the praise! #proud.’

She added: ‘@lalalaurensoley did a lot of debating and the other woman speaking was also amazing. Was some serious girl power!’ 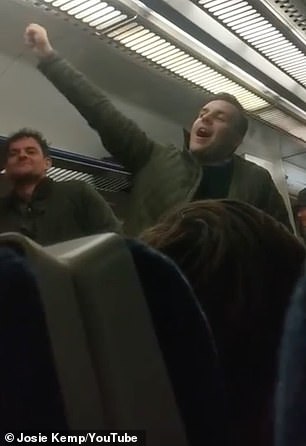 She said the men initially came to her attention when they were allegedly heard mocking an Indian by copying his accent. But when the women boarded their hate was redirected towards them.

They sang a crude song about breasts, before the women asked them to think of their sisters, mothers and girlfriends.

Miss Soley can be heard saying: ‘Do you have any idea how offensive you are?’

And she says to another guy in the same group: ‘Tell your friends to stop being sexist.

‘You’ve got to stand up to it mate. You stand up to people that are doing something wrong.’

She said of the incident: ‘The group of men went on to be homophobic and transphobic, joking about us being in a same-sex relationship.’

Finally having had enough of the racket, Miss Soley stood up to confront the men seated behind them.

The men argued back and forth with Soley for several minutes about sexism and homophobia. One asked for them to stop recording.

One man argued: ‘I could be gay for all you know, so don’t call me homophobic.’ Soley replied: ‘I would support you if you were, and I’m sure your friends would.’

The man also gestured to another in the group, claiming: ‘He is transgender, he identifies as both male and female.’

Later, however, the man referred to said he identified as a lamp. After the men got off of the train, Miss Kemp described a conversation she had with the man sitting next to her.

Miss Kemp said: ‘The guy sat next to me was from India, we got chatting when the men left the train and told me that when these men got on the train and were mimicking and mocking an Indian accent, he felt extremely uncomfortable.

‘It isn’t right! It’s not funny. It’s not OK. Sexist. Homophobic. Racist. Transphobic people, getting away with being hateful. We shouldn’t stand for it.’

Most Twitter users were supportive but some did say the pair were being too sensitive.

The police are now understood to have been informed about the incident. Daniella said: ‘These men make me sick. Really admire your bravery for standing up to them!’

Caroline Kay said: ‘Well done, girls. Not easy to stand up to anyone, let alone a big group of belligerent men. This is disgusting & those men should be ashamed. The other men saying nothing should also know they’re part of the problem.’

But another Tweeter said: ‘Holy sh*t man, just take a chill yo, you people born in some weird prude place man. Let them be.’