Mortgages hit record low as banks desperately try to pull in customers among Brexit uncertainty with five-year fixed rates below 1.5 per cent

By Matt Oliver And Ben Wilkinson For The Daily Mail

With the election and Brexit uncertainty giving buyers cold feet, banks are offering steep discounts to pull in customers.

Brokers said fixed rates on five-year deals have dropped below 1.5 per cent for the first time.

Lenders have also slashed rates for two-year mortgages to as little as 1.05 per cent.

Experts predict they could soon cut these to less than 1 per cent.

The extraordinary price war has intensified as banks struggle to pull in customers.

They are able to lend so cheaply because they can borrow money at an historically low cost, with the Bank of England’s base rate set at just 0.75 per cent.

Mortgage approvals for the first half of 2019 were at a ten-year high, and the number of first-time buyers has reached its highest level since 2007, at 170,000.

Mark Harris, of mortgage broker SPF Private Clients, said the ‘astonishingly cheap’ rates were the lowest he had seen in his 25-year career.

‘I have never known it to be so competitive. It is cut-throat – just ridiculous,’ he added. ‘For a borrower to fix your rate for five years at 1.5 per cent, on the face of it, is a very attractive opportunity.’ 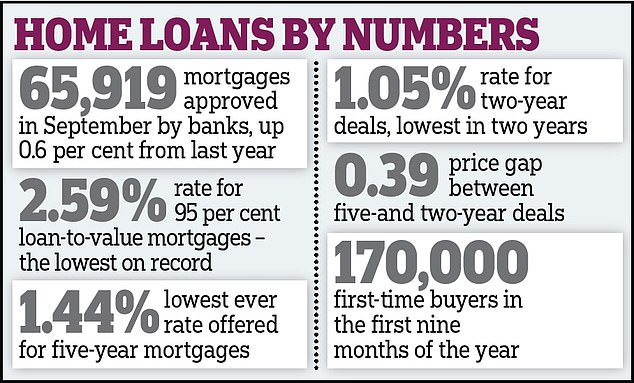 The best deals are available only to those who require loans worth up to 60 per cent of the value of their home. But families can secure rates of just 2.59 per cent even on loans of 95 per cent of a home’s value – another record low. That is much cheaper than the current average standard variable rate of 4.9 per cent.

On a £300,000 mortgage lasting 25 years, the difference between paying 4.9 per cent and 1.44 per cent amounts to more than £32,000 over five years, according to the comparison website Moneyfacts.

Jane King, of the financial adviser Ash Ridge, said the market was so competitive she expected banks could cut interest rates more.

However, she warned buyers to look carefully at the fees being charged. ‘The fees are where the banks will be making their money now,’ she added.

‘For buyers it is all about affordability. So it looks like banks will keep cutting rates – and who knows how low they will go.’

Three lenders – Halifax, Santander and Virgin Money – are offering five-year fixed mortgage rates at below 1.5 per cent, according to Moneyfacts.

This breaches a previous low reached in October 2017.

Rachel Springall, a finance expert at Moneyfacts, said: ‘The mortgage rate war isn’t over and as it stands three big brands offer five-year fixed rate mortgages priced below 1.50 per cent.

‘The lowest rate mortgage may not always offer the best overall value though because it will depend on how much someone is looking to borrow.

‘Borrowers may well be turning to five-year fixed mortgages to secure their monthly repayments for the longer term during a period of economic uncertainty.

‘Lenders are competing on price as it’s a prominent way to compare deals, a move to attract not just new customers but also to retain those who may be looking to switch elsewhere.’