A father was blasted for ‘brainwashing kids with filth’ over the title of his potty training book by a furious Christian mother – only for the complaint to see the book rocket to the top of Amazon’s best seller list.

Award-winning blogger Simon Harris was stunned when he received the furious missive on Sunday [Oct 13] from a reader called Marjorie who bought a copy of ‘Little Budgie’s Done A Fudgie’.

The parent ranted that Mr Harris ‘should be ashamed of himself’ after discovering that ‘fudgie’ had another meaning relating to a sex act and claims she has demanded a refund from the online retail giant.

Simon Harris, pictured with his wife Rachel, and children Luke, 5, Emma, 3, and James, 19 months, wrote a book to help his children get potty trained 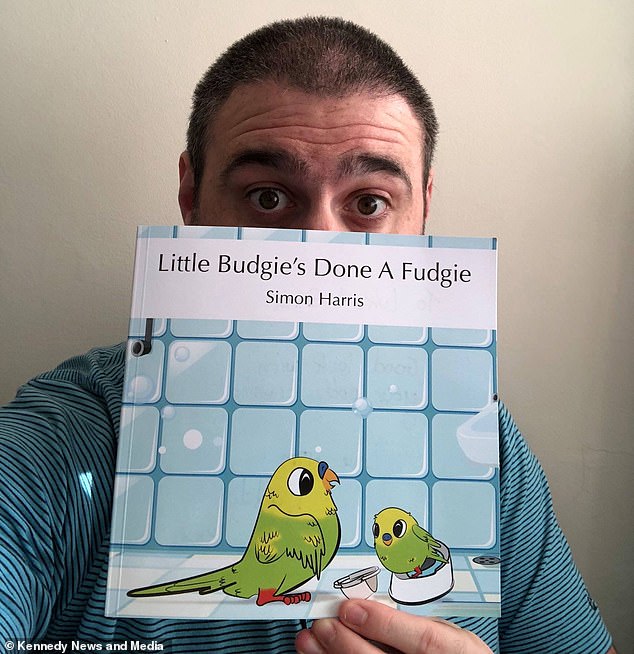 The book, Little Budgie’s Done A Fudgie, pictured, was bought by an American mother called Marjorie who went on the internet to seek out a definition for the word ‘fudgie’

Mr Harris runs the Man Behaving Dadly blog. He said the complaint has helped propel the book to the top of the Amazon charts

She described in graphic detail the nature of the act after being alerted to its meaning by her teenage son.

But the father-of-three claims the word ‘fudgie’ is simply one that rhymes with ‘budgie’ and is a word for ‘poo’ that made autistic son Luke Harris, now five, laugh when tackling potty training in 2017.

From the post, Mr Harris said that thousands of people have clicked through to the Amazon listing where the book now sits in the number one best sellers spot.

Replying to Marjorie, Mr Harris informed her that definition of ‘fudgie’ was not his intention and that her complaint had made his book a bestseller so he ‘couldn’t give a rat’s ass’.

‘I’m very passionate about vaccinations and autism awareness and I’m used to getting abuse and dealing with vitriol and bile online – it’s an occupational hazard.

‘I’m a massive believer in taking nasty experiences and turning it into something positive, when I read the angry message I just laughed at it. 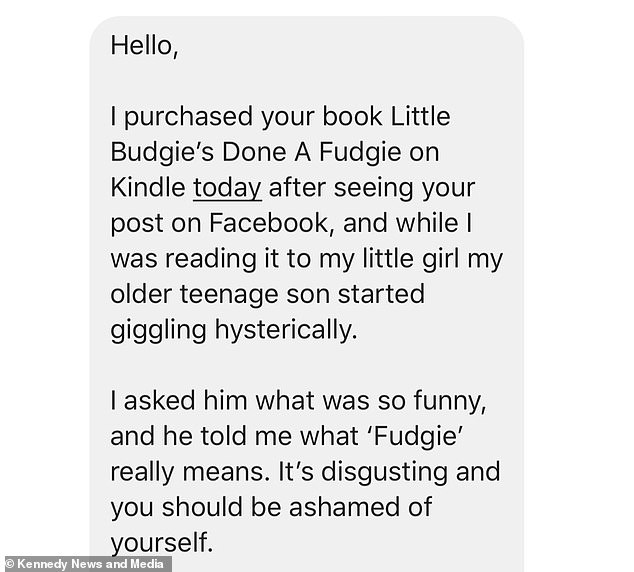 ‘Marjorie is from the US, possibly from the Bible Belt, and was angry because she was convinced that ‘fudgie’ was referring to a disgusting sex act, which it isn’t.

‘People are now actually buying it off the back of her comment, it’s a nice feeling to know the book is now an Amazon bestseller.’

The complaint reads: ‘Hello, I purchased your book Little Budgie’s Done A Fudgie on Kindle today after seeing your post on Facebook, and while I was reading it to my little girl my older teenage son started giggling hysterically.

‘I asked him what was so funny, and he told me what ‘Fudgie’ really means. It’s disgusting and you should be ashamed of yourself.

‘I Googled it afterwards and on Urban Dictionary and have attached a screenshot. 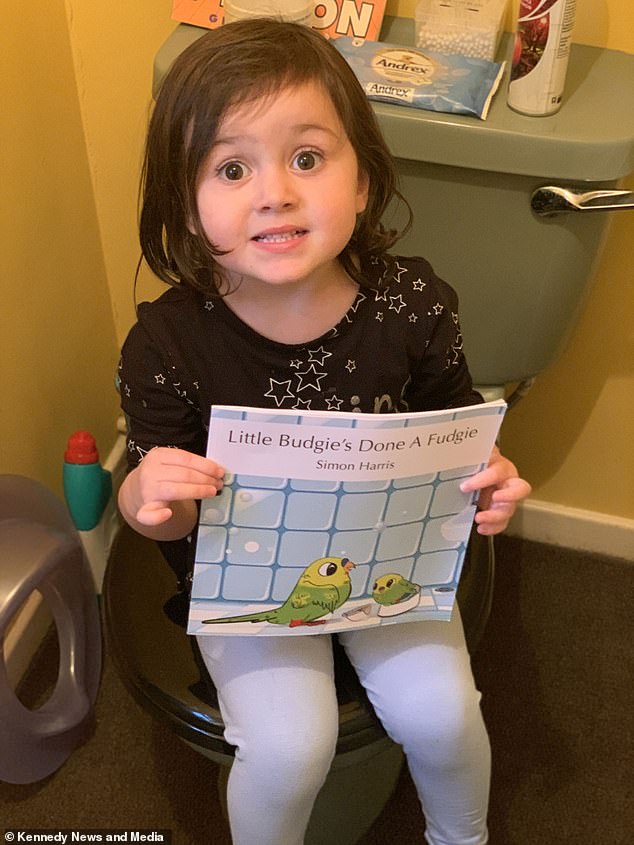 Mr Harris, who posted a photograph of his three-year-old daughter Emma, insisted the book’s title was completely innocent as he was looking for a word to rhyme with budgie 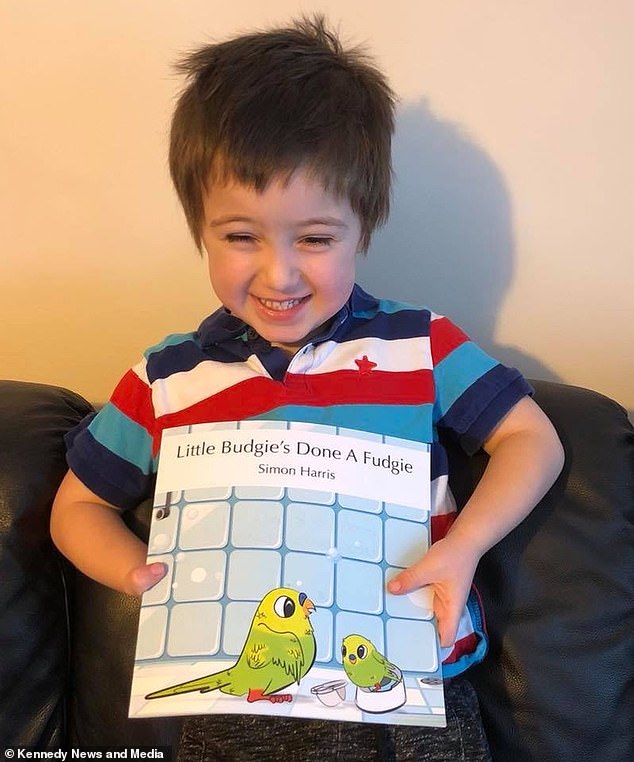 He said the book also made his son Luke laugh

‘It’s hard enough to raise good Christian children in the USA in 2019 and keep them away from this filth without people like you subconsciously brainwashing them.’

‘I have demanded a refund from Amazon and I strongly urge you to reconsider.

After receiving the angry message, Mr Harris took the opportunity to use it as a light-hearted way to advertise the £4.99 book.

Simon’s post read: ‘I replied to Marjorie, the lady from the US who was angry about getting a copy of my book Little Budgie’s Done A Fudgie because she was convinced that ‘fudgie’ was referring to a disgusting sex act.

‘Wonder how she will react when she realises that her complaint has inadvertently sent it to the top of the Amazon Bestseller Chart.

‘Anyway, if you can get past the reference, it’s on sale here.’

Mr Harris, who’s also dad to Emma, three, and 19-month-old James, came up with the idea for the book as a fun way to help his son Luke master going on the potty. 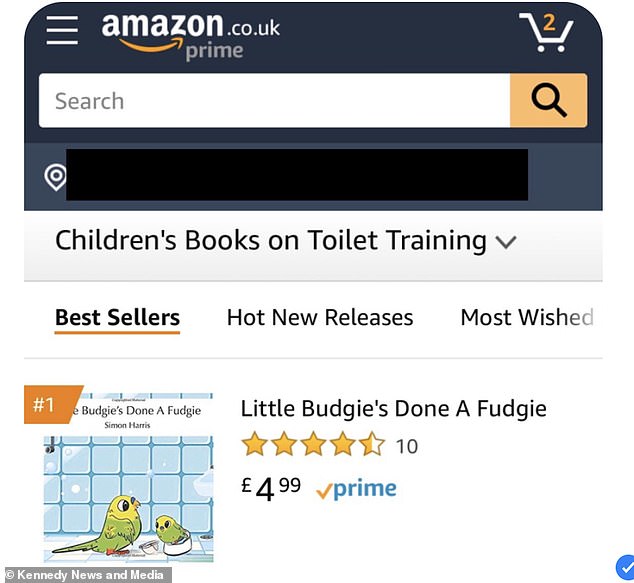 Following the controversy, the £4.99 book has shot to the top of the Amazon books on toilet training chart

Mr Harris said: ‘My son Luke is on the autistic spectrum and he was taking ages to potty train, which is apparently a common trait.

‘We went to a supermarket and were looking at potty training books but I couldn’t see any with an animal.

‘I was spitballing all these potential words for poo and was thinking of rhymes like ‘dog on the bog’ but when I said ‘little budgie and a fudgie’ he laughed a lot so I turned it into a poem, which he really loved.’

Mr Harris then turned it into a book in January 2018 and he, along with music teacher wife Rachael Harris, 34, also taught daughter Emma how to use the potty with it.

The proud father shared a picture of Emma holding the book and beaming with delight on Sunday afternoon and put a link to where it was on sale, prompting the complaint later that evening.

Mr Harris said: ‘Emma mastered potty and overnight training. She loves the book so I put a picture up of her holding it up on Sunday afternoon.

‘Later that evening I received the complaint from Marjorie. The bit about it being ‘hard to raise good Christian children’ made me laugh.

‘I’m not against any religion, but how on earth has your teenager heard of this word?’

Mr Harris messaged Marjorie saying he understood she was concerned about the use of the term ‘fudgie’ but that it wasn’t his intention.

His message read: ‘I shared your concerns with my Facebook audience, and my book ended up going to the top of the Amazon bestseller chart overnight.

‘Therefore, to use a phrase that is popular on your side of The Atlantic, I could not give ‘a rat’s ass’.