A mother has claimed her children used Alexa to order $400 worth of toys from Amazon.

Veronica Estelle, 26, from Sterling Heights, Michigan, was shocked when a UPS delivery driver turned up with boxes full of Barbies, PJ Masks toys and LOL Surprise toys that she hadn’t ordered.

The mother-of-two soon discovered her daughter Aryss, six and son Cameron, four, had bought the early Christmas presents for themselves, paying for them by using voice assistant Alexa and the credit card linked to her Amazon account.

Alexa makes it possible for Amazon customers to order products using saved preferences, including payment method and delivery address, although it is possible for child-safe measures to be put in place.

Veronica Estelle, 26, from Sterling Heights, Michigan, was shocked when a UPS delivery driver turned up with boxes full of Barbies, PJ Masks toys and LOL Surprise toys that she hadn’t ordered. She shared a video of the moment she confronted Aryss, left, and Cameron, right 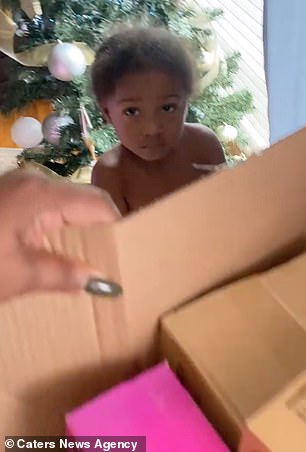 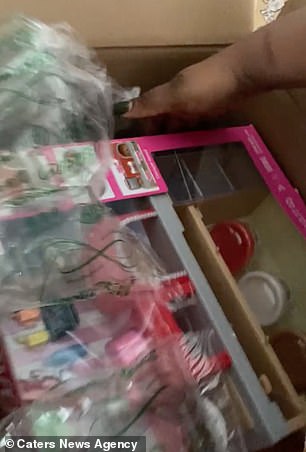 The mother-of-two soon discovered her daughter Aryss, six and son Cameron, four, left, had bought the early Christmas presents for themselves, paying for them by using voice assistant Alexa and the credit card linked to her Amazon account. Right, some of the toys they ordered

A Facebook video of Veronica confronting her two opportunistic children has gone viral, racking up over 5million views.

Veronica jokingly asked her children: ‘How come you didn’t buy me anything?’

While some parents praised the children’s creativity, others questioned whether the entire situation might be a stunt set up by Veronica in a bid to find fame online.

When the parcels first arrived, Veronica thought they were gifts from family members. 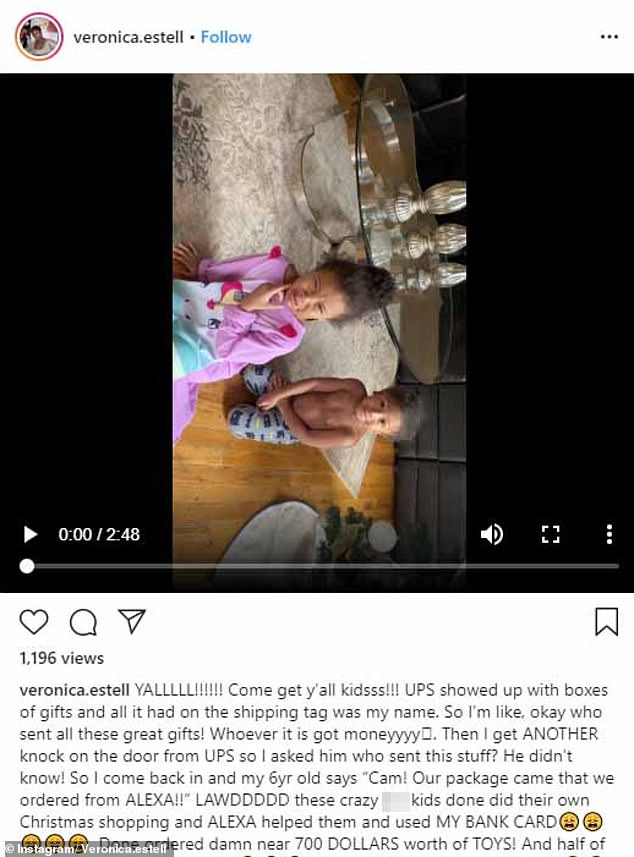 Veronica also shared the clip on Instagram (pictured) as she estimated that the items totaled $700, before her bank confirmed the children had spent just $400

Veronica said: ‘My husband was leaving out for work and received a package in the mail and brought it inside.

How does Alexa voice purchasing work?

Voice purchasing is enabled by default once an Alexa device is registered.

When Purchase by Voice is enabled, a user can make Amazon purchases or payments on their Alexa-enabled devices.

When Purchase by Voice is disabled, Alexa doesn’t allow anyone to make an Amazon purchase or payment on your Alexa-enabled devices.

It is also possible to enable a Voice Code that only allows recognised voices to make purchases using Alexa.

This is helpful for parents who only want their voice to be recognised.

‘When I looked in the box, it was a bunch of toys, so I assumed that it was from family because their grandmother lives in Texas, or maybe even my sister. However it had no name on it.

‘Then I received another knock at the door and there was another package on the porch. And then another.

‘My daughter came in and said, “Cam, our toys that we ordered from Alexa are here”. I then said to her, “you ordered all of this?”, and with confidence she said “yeah we just asked Alexa and she got it for us”.

‘They ordered some LOL Surprise toys, a Barbie Dreamhouse, PJ Masks toys, a pack of 48 batteries, and some Barbie dolls.

‘The cost was close to $400. They actually got some things on sale and Amazon was able to stop the other purchase before it was shipped.’

The mother-of-two told their children they would be punished for the order and joked they would ‘go to jail’ for ‘credit card fraud’.

She later revealed Amazon had agreed to refund the orders.

Viewing the video, one person wrote: ‘They just did their own Christmas shopping, them kids saved you from all that shopping. Wrap it up and put it under the tree, hope they got everything they wanted.’

Another said: ‘Awwwwww! Can THEY keep it? I wish I had the money I’d just send it to you so they can keep it… LOL.’

A number of responses to the footage came from those accusing the mother of faking the incident to gain viral fame.

One person wrote: ‘So you mean to tell me mum didn’t know between the time children ordered and time of order arrival that there was a $700 discrepancy charge on her credit card? C’mon man!! B*******’

‘I don’t know, I think you just wanted your 15 minutes of fame. But if that is not the situation mama you better get a handle on that now.’

A third added: ‘I don’t believe this, this internet attention seeking stuff is getting out of hand & the sad thing is people believe it.’

Many people accused the mother of faking the incident for internet fame, as they questioned how they were able to access her bank details

A young girl has accused an Amazon device of ‘accidentally’ ordered her hundreds of dollars’ worth of cookies and a fancy dollhouse.

Six-year-old Brooke Neitzel, from Dallas, Texas, gave her mother the shock of her life when she received a confirmation email for an order of a £140 ($170) Kidcraft dollhouse and more than four pounds of cookies.

Confused by what could have caused the charge, Megan Neitzel cast her mind back to the Amazon Echo Dot that her in-laws had recently given the family as a present.

The mother-of-three said she then remembered hearing her kids talk to Alexa – the voice-based operating system at the heart of the new gadget – and immediately began to get suspicious.

The mother told Fox News she then spoke to her daughter about the costly online order.

And while Brooke denied placing the order, she did confess to ‘asking Alexa about cookies and a dollhouse’.

From there, it appears as thought the operating system took the question as a request, and an order was placed.

Has your child ordered anything from Amazon without your knowledge? Email: Latoya.Gayle@mailonline.co.uk