After reading scare stories online, Sophie Dale was struggling to decide whether to get her baby son Levi vaccinated.

‘I would see other mums on Facebook share posts saying it causes autism,’ she said. ‘I was scared and wasn’t sure what to do.’

In the end, the young mother had no choice. Levi contracted measles two weeks before he turned one, the age when children become eligible for the MMR jab.

The infection began as a rash but within days his immune system had shut down. Levi spent his first birthday hooked up to a drip in hospital, fighting for his life as sepsis ravaged his body.

Miss Dale, 23, said: ‘He woke up with a temperature and a rash and we took him to the GP, who suspected measles. We were sent to A&E and Levi was formally diagnosed and I was told to keep him away from everyone.

‘I began to realise how serious it was when Public Health England rang me and asked a million questions. They even sent someone round to my house for swabs.’

Levi spent two weeks recovering at home in Chesham, Buckinghamshire, before his condition suddenly deteriorated. Miss Dale said: ‘He began to have seizures, his face was swollen and his temperature was up to 40.6C (105F). It was terrifying.

‘We called an ambulance and he was blue lighted to hospital where he was treated for secondary infections including sepsis, encephalitis and pneumonia.’

Levi spent six days at Stoke Mandeville hospital in Buckinghamshire, where he was sedated, had a lumbar puncture and was pumped with antibiotics.

Now almost two, he has made a full recovery. Miss Dale hopes her ordeal will persuade other parents to act and has backed the Daily Mail’s vaccination campaign.

The criminology graduate said: ‘I was naive and hadn’t realised how dangerous measles can be. It’s not just a rash – one in 15 children develop complications including encephalitis, convulsions, meningitis or deafness.

‘Vaccinating is not just about protecting your children, it’s other people’s children too. Levi got measles because of someone else’s choice not to vaccinate.’

Miss Dale admitted she had had concerns about MMR, but decided she would go ahead even before he fell ill. ‘He almost died, and I know I would never have forgiven myself if he’d got measles because I chose not to vaccinate him,’ she said.

Miss Dale is encouraging parents who, like her, have doubts to look for reliable information from their GP or the NHS. She warned that social media and discussion forums are a breeding ground for scare stories and ‘anti-vaxx’ propaganda.

‘Do your research. Don’t read rubbish articles from weird American websites,’ she said.

The mother-of-one added that she sees posts ‘every day’ on Facebook spreading false information.

‘They say vaccines are propaganda from the pharmaceutical industry or that measles can be prevented with good hygiene,’ she said. ‘These sort of messages are putting children in danger.’

The Daily Mail is campaigning to improve the uptake of all childhood immunisations, after the NHS revealed numbers had fallen for every single jab. The campaign has been backed by Health Secretary Matt Hancock, NHS chief executive Simon Stevens and Public Health England boss Duncan Selbie, as well as charities, doctors, scientists and the United Nations. 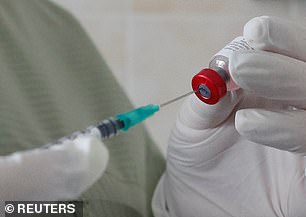 Falling vaccination rates have forced European health chiefs to abandon their goal of eliminating measles by 2020.

In 2014 the European Centre for Disease Control (ECDC) set the ambitious target of declaring all European countries ‘measles-free’ by next year – but this now looks impossible.

Dr Lucia Pastore Celentano, from the ECDC, said: ‘We have an exceptionally high number of cases of measles and we are very concerned. It is now very unlikely that we will achieve our goal of eliminating measles by 2020 and we are trying to postpone this goal.’

Britain is one of four European countries to have lost their ‘measles-free’ status in the past three years. Dr Pastore Celentano said all European governments must make it their ‘highest priority’ to meet the World Health Organisation’s target of 95 per cent vaccine coverage.

She said: ‘We fully support the Daily Mail’s campaign to encourage people to vaccinate and raise awareness of the danger of these diseases.

‘There has been a loss of confidence in vaccines due to misinformation and a lack of trust. Many parents do not vaccinate because they don’t think measles is severe enough, but it is deadly.’

Last week the World Health Organisation warned that the disease is staging a devastating comeback, killing thousands of children around the globe.