Radio 1 presenter Nick Grimshaw has revealed for the first time that he ‘almost died’ from heat exhaustion during a Sport Relief desert challenge in February.

The former X Factor judge, 35, admitted that falling ill after cycling for eight hours in ‘oven like’ temperatures of up to 35 degrees centigrade was the ‘most scary and traumatic’ experience he’s ever had.

After doctors pulled him out of the charity event, the Drivetime presenter then experienced a ‘horrible, physical panic attack’ which went on for five hours and led to medics injecting him with valium to calm him down.

Terror: Radio 1 presenter Nick Grimshaw has revealed for the first time that he ‘almost died’ from heat exhaustion during a Sport Relief desert challenge in February (pictured with Judge Rinder)

Nick, known to fans and friends as Grimmy, then rang his mother, Eileen, and broke down in tears as he recalled how close he had come to dying.

He revealed: ‘When I called her I was really trying to hold it together and then I was like ‘Mum it was really bad*’ and then I properly properly cried…

‘And I don’t think I’ve cried to my mum as an adult. And I think that was probably really traumatic to be called and for me to be like ‘I nearly died’.

The presenter was taking part in the first day of the charity’s ‘The Heat is On’ celebrity challenge last month in the Namib Desert, Namibia when the incident took place. 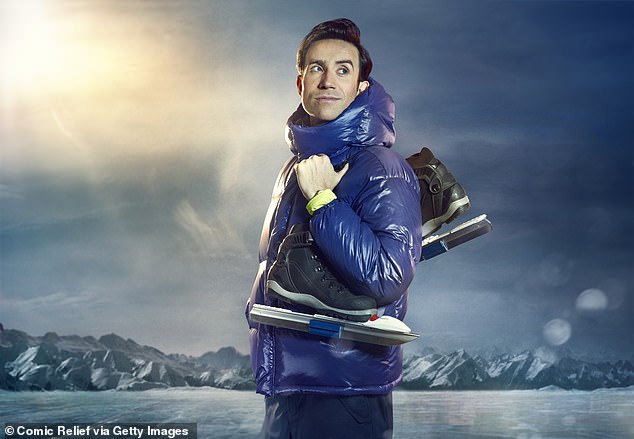 Shocking: The former X Factor judge, 35, admitted that falling ill after cycling for eight hours in ‘oven like’ temperatures of up to 35 degrees centigrade was the ‘most scary and traumatic’ experience he’s ever had

On the first day of the challenge – which involves a 100-mile trek across the tough terrain over four days by bike, foot and ski – he was stopped by a medic after cycling for over eight hours.

He was just two kilometres from completing the 35-mile cycle race.

He told Jessie Ware’s Table Manners podcast: ‘The doctor went past me and said ‘Oh you look weird’. There’s a picture of me actually at that time and my skin looks sort of like an oil spill.

‘It’s almost like iridescent, purply grey. I was not a well woman. And they pulled me and I got exhaustion.’

Nick, who had been preparing for the race for months, said he thought that the illness didn’t sound ‘that bad’.

He explained: ‘But it was really gnarly. It was properly the most scared and most traumatic thing I’ve ever ever experienced’.

The presenter revealed he had a panic attack which lasted for hours, and he was injected with valium to calm him down.

He said: ‘It brought on like a horrible, physical panic attack that went on from about 6pm to 11pm at night. And I was freaking out. The good thing was that they had to inject me with valium. It was like a light switch. I was like ‘I feel fine, I wanna go out’.’

Grimshaw was not able to speak to his mum until the day after he was pulled out of the first day of the race.

He said: ‘She thought it was absolutely insane when she watched the documentary. She said ‘Don’t do it again, I nearly had a heart attack’.’

The presenter admitted he was wracked with guilt for being pulled out of the first and second day of the challenge due to his heat exhaustion.

He said: ‘I was really upset – because it was something that I focused on and trained for and I felt like I’d let the team down and let people down who had donated. So I was having this crisis of ‘I’ve let like all these people down, and I’m trying to do this thing and I can’t do it’.’ 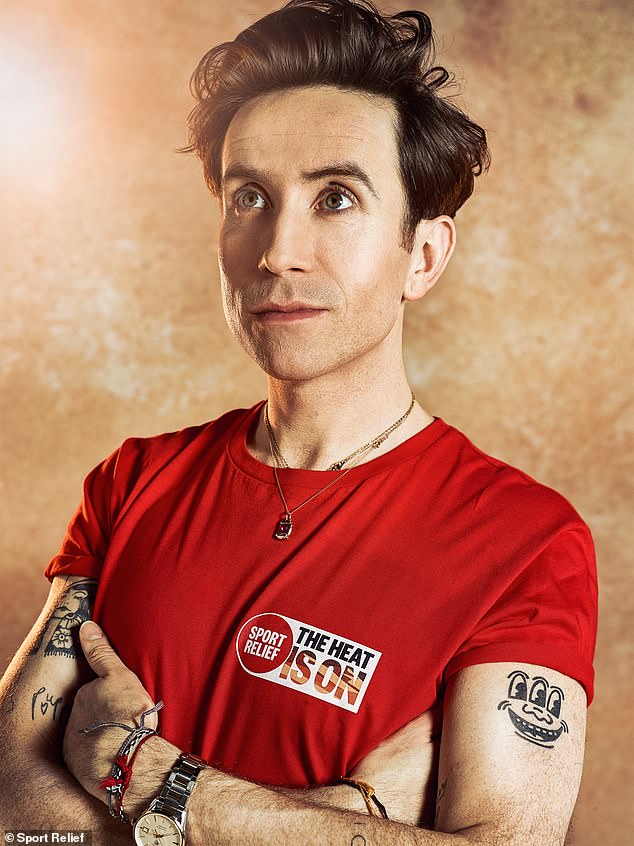 Terror: Nick, known to fans and friends as Grimmy, then rang his mother, Eileen, and broke down in tears as he recalled how close he had come to dying

Grimshaw managed to continue Sport Relief Challenge on the third day and reunite with his celebrity teammates – which involved skiing across the tough terrain.

The expedition aims to ‘help break down the stigma of mental health and raise money for mental health services’, according to Sport Relief.

He said: ‘After that [heat exhaustion] had passed, it was hard. But it was like the right level of hard. It was the hardest thing I’ve ever done – I really thought I’d hate it. But there was something about that extreme challenge that I really enjoyed. I didn’t think that was me.

‘It was so hard. I will laugh at any other exercise that anyone asks me to do. I thought, can it be hotter than Ibiza, than LA – yes. It was like being in an oven for a week.

‘And obviously with sand, you can’t cycle on it so it was the hardest thing ever. But if you asked me to do it again, I would say yes.’