1.5MILLION elderly people miss out on social care that could let them live at home

By Steve Doughty Social Affairs Correspondent For The Daily Mail

The number of older people who do not receive sufficient care to allow them to live at home has reached 1.5million, analysis suggests.

Age UK said the total will rise to 2.1million by 2030 without urgent reforms to the care system.

The figures come from large-scale surveys and official population estimates, and cover over-65s who need help with daily tasks – such as getting out of bed, going to the bathroom and getting dressed – but receive either too little or none at all.

Age UK said the total will rise to 2.1million by 2030 without urgent reforms to the care system (file photo)

The 1.5million estimated to be without the assistance they need to continue living independently amount to one in seven of the population over the age of 65, the Age UK report said.

Help for frail or vulnerable older people living at home has been a repeated target for spending cuts over the past 15 years.

However, providing care at home is a key part of helping people retain their independence.

Moving into a care home means not only losing this but, for those with property or savings, being forced to sell off homes or surrender savings to pay the bills.

Age UK has called for spending of an extra £8billion on adult social care over the next two years.

It said adult social care should be paid for from general taxation, with free care for those who need it.

At present only those with the highest levels of illness and disability can claim free help at home.

The charity said help at home should in future be available to people with only ‘moderate’ levels of disability.

Labour’s ambitions to spend an extra £55billion in public money each year for the next five years include the establishment of a National Care Service to provide free personal care for those living at home, with the aim of providing all necessary help with preparing meals, getting out of bed and washing. 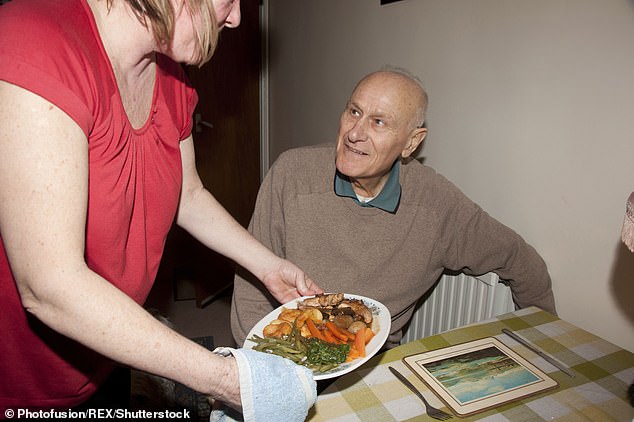 The figures come from large-scale surveys and official population estimates, and cover over-65s who need help with daily tasks – such as getting out of bed, going to the bathroom and getting dressed – but receive either too little or none at all (file photo)

This, the party has said, will cost £6billion a year.

Boris Johnson is yet to set out detailed plans for reforming the adult care system.

Theresa May’s proposals, promoted in the 2017 Tory election manifesto, were condemned by her opponents as a ‘dementia tax’ and contributed to her losing her Commons majority.

Age UK director Caroline Abrahams said: ‘For the last few years these figures have been getting worse as governments have dithered over how to overhaul a system of care that everyone agrees is no longer fit for purpose.

‘Some older people are fortunate and receive good care from committed staff which makes a huge difference to their lives, but far too many are going without the support they need to live decently and with dignity.

‘If governments continue to refuse to act then our research suggests that by 2030 more than two million older people in need of care could be left fending for themselves.

‘If you are facing a decline in your ability to do everyday things it’s hard enough if you have friends and family to help, but if you are on your own as many are then the outlook is not only depressing but frightening.’

The Daily Mail has campaigned for years to help preserve the dignity of Britain’s elderly.

In addition, the newspaper launched a major campaign in July calling on Boris Johnson to fix the crisis in social care for dementia patients.

The Mail is campaigning for reform of the broken system which forces countless people with dementia to sell their homes to fund crippling care costs.