A new implant for arthritic thumb joints is available on the NHS. Retired art teacher Bob Stafford, 70, from Wilbarston, Northamptonshire, was one of the first to benefit, as he tells ADRIAN MONTI.

After 35 years as a school teacher, I decided to fulfil my long-held ambition of setting up my own pottery and ceramics studio.

But soon after starting my new venture seven years ago, I began suffering shooting pains in my thumbs. I took painkillers and used ibuprofen gels, but nothing really worked.

As the pain in my left thumb worsened and the movement became more restricted, I decided to see my GP. Everyday tasks such as unscrewing lids and tying my shoelaces became a struggle, and I realised my thumbs had effectively worn out.

Bob Stafford, 70, from Northamptonshire, was one of the first patients to receive an NHS implant to treat arthritis in his thumb

At the start of 2013, I was referred to the arthritis clinic at my local hospital, where X-rays revealed osteoarthritis in the base of both thumbs. I joked it must have been caused by pressing all those drawing pins into school noticeboards over the years.

By now I was struggling to work in my studio. Handling heavy, cold clay made my thumbs even more painful.

After my diagnosis, I had cortisone injections into the joints to ease the pain by reducing the swelling. But six months later the effects had worn off.

My GP said there were two surgical options. The first involved removing a bone in the joint, which would stop the pain of bone rubbing against bone and restore movement, although my thumbs would be left with little strength.

The second was fusing the thumb joint using metal and screws so it was rigid. This would make it stronger and pain-free, but would not allow any movement — which would mean no more pottery. 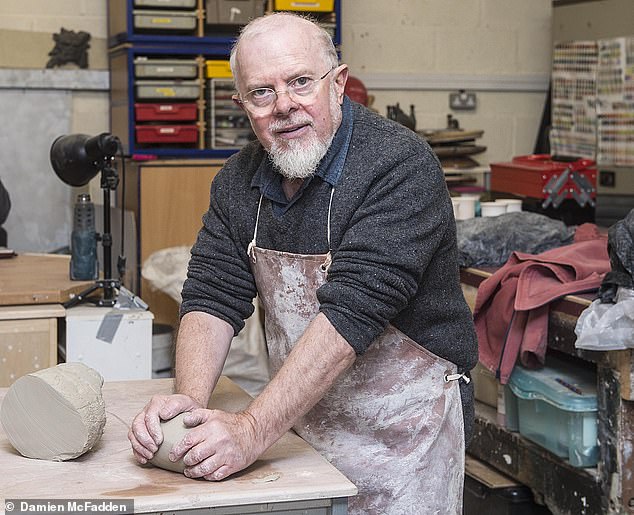 The retired art teacher said that after the procedure in 2016 it took more than a year of building up strength and flexing for it to feel normal again. However, the pain had also vanished. (Piuctured: Bob doing pottery in his studio)

So, I set about doing my own research and soon found Chris Bainbridge, a hand surgeon at the Royal Derby Hospital. My GP referred me for an NHS appointment there in December 2015.

Mr Bainbridge told me about a new operation being trialled where they put a synthetic cartilage implant into the joint where the natural cartilage had worn away.

It would restore my thumb to its original powers, meaning I could return to the pottery wheel.

As no bone would be removed or fused, the surgeon said I could have one of the more traditional operations if the trial failed.

I was delighted to go for surgery on my left thumb in March 2016. I was awake but sedated during the operation, which took less than an hour. I went home the same day with my arm bandaged up, but it didn’t hurt much.

After ten days, the bandages were taken off and my lower arm was put into a plaster cast for eight weeks — the doctors wanted to ensure the joint was fully healed before any movement was tried.

Once the cast was removed, I began physiotherapy: at first once a week, and then every month, for a year. 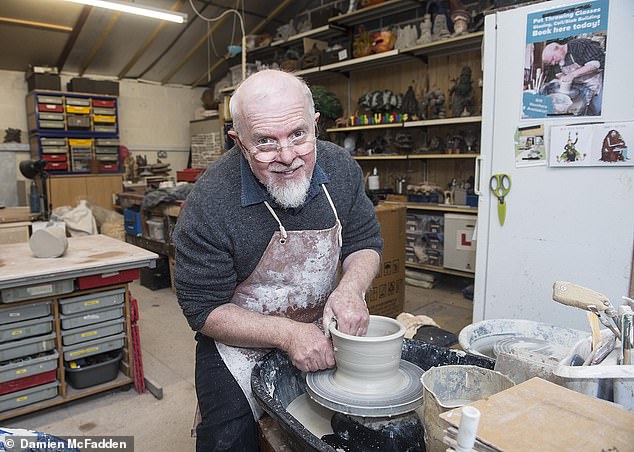 Bob, pictured making a pot out of clay, said the operation itself took less than an hour

The arthritic pain had gone straight away, but it took more than a year of building up strength and flexibility for it to feel ‘normal’. By then, I could even help my son with his joinery business.

I had my right thumb done in March last year, but this time, following the success of the trial, I didn’t have to have my hand in a cast. I was the first person to have both thumbs treated this way.

I celebrated by throwing a pot for Mr Bainbridge as a thank you.

Osteoarthritis in the thumb is extremely common as we age. It happens when the cartilage covering the ends of the bones where the thumb meets the palm gets worn away. Bone then rubs against bone, causing inflammation and pain.

Genetics is the cause, rather than overuse. But if you develop arthritis, using the joint will make the pain more severe — and it’s hard not to use our thumbs. As the discomfort worsens, strength and dexterity suffer, making everyday activities remarkably tough.

WHAT ARE THE RISKS?

‘Because the bone is not removed, traditional surgery — a trapeziectomy — can always be used as a fallback, which is important for the patient to know.’

The first line of treatment is painkilling gels or learning exercises to strengthen the small muscles at the base of the thumb. A splint around the wrist might be suggested to keep the thumb in place, but it’s a temporary fix as the joint will worsen over time regardless.

Another option is a steroid jab. But because the joint is so small, not much can be injected, so the relief is very short-lived.

The final option is surgery. For more than 50 years, the traditional fix has been a trapeziectomy — the removal of the trapezium, a small bone that acts as a link between the wrist and thumb. Once removed, the space just fills with scar tissue.

Although it takes away the pain, it does not restore the thumb’s strength, so simple tasks such as removing a lid from a jar will still be difficult.

I do not often recommend the alternative fusing operation because it is so restrictive.

About four years ago, I was approached by a U.S. company which had developed a synthetic cartilage implant called Cartiva. Rather than taking out the trapezium, the implant acts as a cushion in the joint, so the bones no longer rub and cause pain.

I was asked to carry out some clinical trials on it at our hand unit, along with four other NHS trusts. Over two years, our findings showed that this new implant was more than 90 per cent successful.

It is cylindrical and about 1cm wide with a curved top and an outer shell made of polyvinyl alcohol (PVA) — a rubbery substance the body tolerates well.

For the 45-minute operation, the patient is awake, but their arm is numbed. I make a 1.5 in incision on the back of the thumb and then move two tendons to the side so I can see the joint. I cut the lining around the joint — the capsule — to access the bottom of the first metacarpal (first thumb bone). 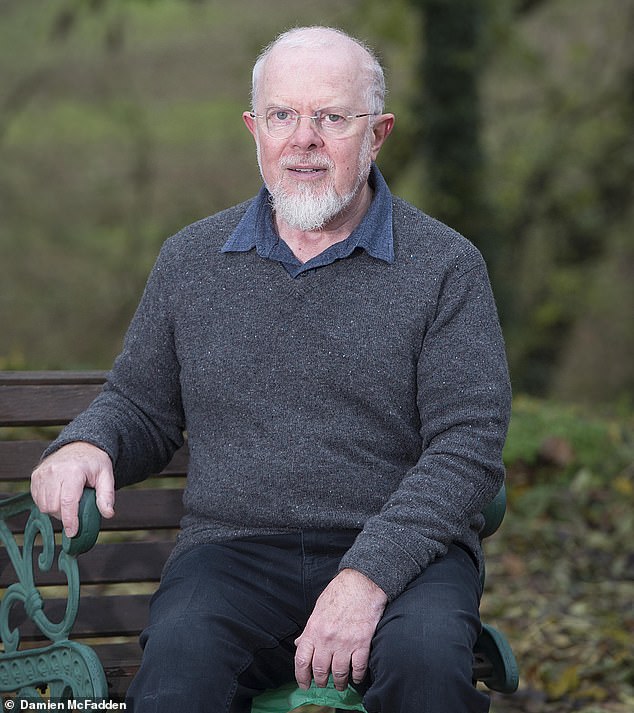 Bob shown sitting on a park bench. Hand surgeon at Royal Derby hospital, Chris Bainbridge, said osteoarthritis in the thumb is extremely common as we age

I drill an 8 mm hole into the metacarpal and slot the implant into it snugly; the exposed, slightly rounded, top of the implant replaces the lost cartilage. Then I sew up the capsule and the skin using a single dissolvable stitch.

The patient goes home the same day, with a bandage covering the thumb and wrist. This stays on for ten days. After this, physiotherapy will help to strengthen the thumb. Usually, the patient can return to driving in about four weeks.

In the three to six months after surgery, they will feel the strength returning and it will soon be as good as someone who does not have arthritis. After a year, I would expect it to be fully recovered.

Cartiva is suitable for anyone except patients with severe (stage four) arthritis, where the joint is too damaged to take an implant.

It is being rolled out at more hospitals and I hope in future it will be the way we treat everyone with arthritis in their thumbs.

HEALTHY ETHICS: PRODUCTS THAT ARE GOOD FOR YOU AND THE UNIVERSE 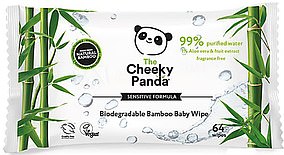 Recent excavations of blockages in our sewers have drawn attention to the grim ‘fatbergs’ formed when people pour cooking grease down the sink and, worse still, flush wet wipes down the loo.

Plastic is included in the weave of most wet wipes to make them more durable — so, whether thrown in the toilet or the bin, they do not degrade like normal tissue and end up clogging our sewers, waterways and landfill for ever.

But manufacturers such as Cheeky Panda provide an alternative: its wipes are made of 100 per cent biodegradable bamboo and, although they are packaged in plastic, it is fully recyclable. Just make sure to put the packaging in the recycling rather than the bathroom bin once you’ve finished a pack.

MAKING DRUGS: THE WEIRD WAYS THAT MEDICINES ARE MADE

Almost half the synthetic insulin used to treat people with type 1 and type 2 diabetes comes from the ingredient that gives a rise to loaves of bread: baker’s yeast.

This yeast has been genetically engineered to contain a gene for insulin production, and pumps out the sugar-processing hormone as it is fermented in huge stainless steel flasks in a Danish plant that covers more than 1.2 million square metres.

Drug company Novo Nordisk says just one millilitre of yeast can make enough insulin to save half a million lives.

Other companies use modified bacteria to make insulin. The gene can be tweaked to produce versions that act more quickly or slowly in the body, so it is easier for those with diabetes to control their blood sugar.