Former Tory chancellor Philip Hammond tore into Boris Johnson‘s Brexit deal today saying he would not be ‘duped’ into backing something that could lead to a ‘heavily camouflaged no-deal’ departure.

The ex-top minister said the Prime Minister needed to ‘reassure’ sceptics like him that the withdrawal agreement would not lead to the UK crashing out of the EU next year because the backstop had been removed.

It came after Tory MP John Baron claimed yesterday that he had been assured by No 10 that the deal would allow the UK to sever ties with the EU if it fails to secure a trade deal.

His intervention came as MPs met for a historic Commons sitting today in order to vote on Mr Johnson’s deal.

Writing in the Times Mr Hammond said: ‘My former colleague, John Baron MP, gave the game away: they are being told that, once we are out, the UK will make a take-it-or-leave-it proposal for a minimum-ambition,”Canada-minus” trade deal on the UK’s terms and when the EU rejects it, the UK will leave without a trade deal at the end of 2020.

‘I haven’t come this far seeking to avoid no deal in 2019 to be duped into voting for a heavily camouflaged no-deal at the end of 2020. But I am not a lost cause!’ 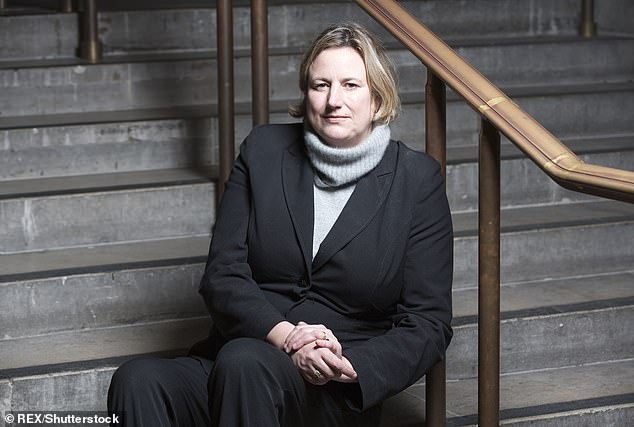 He added that the Government needed to ‘reassure us of a serious intention to negotiate — and compromise — for a high-ambition future trade relationship’.

‘If the government can reassure sceptics like me of its commitment to an ambitious future relationship under this deal, then even if it loses the vote on the amendment and has to seek an extension to the Article 50 period, it can re-present the deal to parliament in the form of the WAIB once the extension has been granted and there is no longer a risk of a crash-out on October 31.

‘There are many colleagues who would then support it — and the extension could be terminated as soon as the WAIB is passed. I will stand by my phone!’

Mr Hammond later told the BBC he would also vote for the Letwin amendment, stating: ‘This cannot be the final vote today because we do not know the full shape of the package.

‘The Letwin amendment gives us an insurance policy that prevents us having to look at this Bill against the constant threat of the Government to pull the plug and crash us out on October 31.

‘We have to remove any risk of leaving on October 31 with no deal.’

Ms Sandbach also held out the chance that she could change her mind over the deal.

She told the BBC today that she had been contacted by No 10 ahead of the vote saying ‘my mind isn’t closed’. But she said she could not be bought off with the promise of having the Tory whip restored. 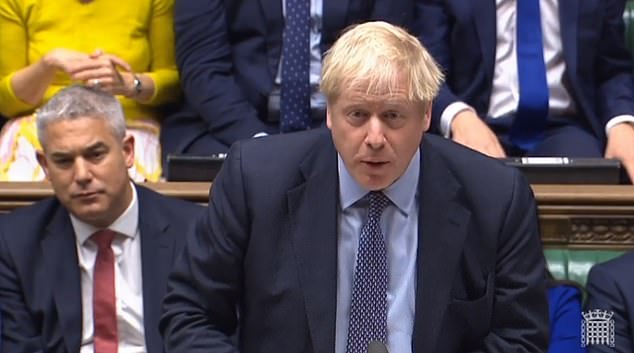 Kicking off a ‘Super Saturday’ showdown in the House of Commons, Boris Johnson complained that there might not be a ‘meaningful’ decision for days longer due to the Letwin amendment 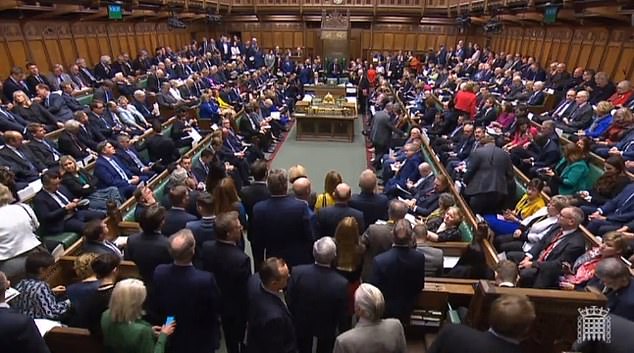 Boris Johnson today vented fury at a Remainer plot that looks set to snatch away his moment of triumph on a crunch Brexit vote.

Kicking off a ‘Super Saturday’ showdown in the House of Commons, the Prime Minister complained that there might not be a ‘meaningful’ decision for days more.

He said it was ‘urgent’ for the country to get past the standoff and ‘unite’. ‘Now is the time for this great House of Commons to come together and bring the country together tooday,’ he insisted.

It came after a wrecking amendment tabled by former Cabinet minister Sir Oliver Letwin is set to prevent the PM’s deal being put to a formal vote, forcing him to beg the EU for an extension.

The threat came as Mr Johnson has been frantically trying to win over the last few wavering MPs with the numbers on a knife edge. 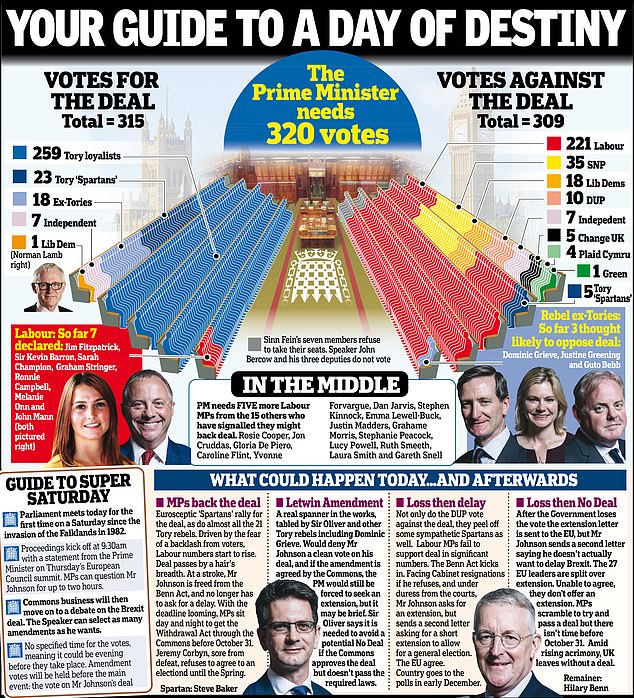 He has been boosted overnight by the support of leading Tory ‘Spartan’ Mark Francois and ex-Cabinet minister Iain Duncan Smith, while there is mounting speculation that at least a dozen Labour MPs will support the package dramatically thrashed out with Brussels this week.

That would offset furious opposition from his former DUP allies and Jeremy Corbyn, and put the premier on the threshold of an historic triumph that could define the country for a generation.

Amid polls showing the public is weary of three years of bitter wrangling after the referendum, Mr Johnson has told politicians that ‘today we can get Brexit done’.

However, an extraordinary piece of Parliamentary trickery could yet deprive the PM of the ‘clean’ vote he craves on his deal.

Sir Oliver – who served in Cabinet under David Cameron – has tabled an amendment that would effectively deny approval of the deal until after detailed implementation law has been passed.

That is widely expected to be selected by Speaker John Bercow, and passed with support from Labour and Lib Dem Remainers, many of whom still want a referendum to cancel Brexit altogether.

Under the rebel Benn Act, the PM will then be forced to beg the EU for an extension by tonight – breaking his ‘do or die’ vow to get the UK out of the bloc by October 31.

One government source said: ‘If it passes, it’s an act of sabotage dressed up as reasonableness. MPs are still trying to put off the moment of decision.’

Sir Oliver insisted that he was a supporter of the Prime Minister’s plans and that it was only designed to act as an insurance policy to ensure that the UK did not leave the EU without a deal on October 31.

But a Government source said: ‘The amendment is not about conditional approval – it is explicitly withholding approval. The vast majority of the signatories have no intention of ever voting for a deal, and have never done so. They want an extension and a chance for a second referendum.’

Sir Oliver Letwin has been a repeated thorn in the side of the government over Brexit.

His amendment, which MPs are expected to vote on this afternoon, would force Boris Johnson to ask the EU to delay UK’s departure beyond October 31.

It would also rob the Prime Minister of the chance to test the will of the House of Commons to see if a majority of MPs support his Brexit deal.

Sir Oliver has insisted that the move is just about bolstering protections against a No Deal split from the EU.

It would require the government to pass all the legislation needed to enact Brexit before MPs finally sign off on the terms of the agreement.

But his critics believe it is nothing less than a wrecking amendment designed to stop the UK leaving the EU.

This is hardly the first time that the former high-ranking Cabinet minister has been involved in efforts which have frustrated the government’s Brexit proposals.

He has been one of the leading Brexit rebels among Remain-backing MPs as they have tried and succeeded in their efforts to rule out a No Deal Brexit.

His name was at the top of a motion passed at the start of September which enabled MPs to take control of the Commons and subsequently pass the Benn Act, the anti-No Deal law that will force the PM to ask the EU for a delay if no agreement has been backed by close of play this evening.

Sir Oliver was loyal to Theresa May’s original Brexit deal as he backed it on all three occasions when it was put to a vote.

But the prospect of a No Deal Brexit prompted him to play a central role in bringing forward the indicative votes process earlier this year when MPs tried and failed to agree a Brexit option that a majority in the Commons could back.

His rebellion over opposition to No Deal came to a head last month when he was one of 21 MPs stripped of the Tory whip after supporting a bid to block a disorderly split from the EU.

He is in many respects an unlikely rebel.

Educated at Eton and then Cambridge, the 63-year-old first entered politics as a member of Margaret Thatcher’s policy unit in Number 10 in the 1980s.

He was then first elected as the Tory MP for West Dorset in 1997 before making a rapid rise up the ranks, joining the opposition frontbench and eventually becoming shadow chancellor in 2003.

He became a key figure in David Cameron’s administration, acting as the PM’s ‘fixer’, after he helped to draw up the Tories’ 2010 election manifesto.

After being a constant in Mr Cameron’s governments, Sir Oliver was then ousted from the frontbench by Theresa May when she became PM in 2016.

Sir Oliver is regarded as a ‘big brain’ in Whitehall circles and is viewed as a man who has a gift for creative thinking and problem solving.

But he has over the years developed a reputation as a hapless politician who has been prone to gaffes and finding himself in embarrassing situations.

He once unwittingly welcomed two burglars into his London home after they said they wanted to use the bathroom.

He was also once spotted discarding parliamentary papers into a bin in St James’s Park.

Before the 2001 election he and his local challengers dressed up in togas for a debate.

In 2015 he apologised after it emerged he had blamed ‘bad moral attitudes’ in black inner-city communities for riots in the 1980s in a paper he had helped write.

Outside of politics, Sir Oliver is married and has two children.

He is expected to stand down as an MP at the next election.