A Polish kitchen worker who battled London terrorist Usman Khan wielding a ceremonial pike has been hailed by his boss for his life-saving courage.

Lucasz Koczocik whipped the 5ft lance off the wall when he heard chilling screams while washing glasses in the basement of Fishmonger’s Hall on Friday.

The heroic worker charged at 28-year-old Khan and thrust the pike into the attacker’s chest before engaging him in one minute of ‘kill or be killed’ combat.

Mr Koczocik was then aided by two others, one with a narwhal tusk, the other with a fire extinguisher, in battling the terrorist through the halls of the historic building.

Doorman Gary sought to stop Khan escaping into the street and maintenance man, Andy – a former policeman – was stabbed in the chest while blocking the door.

Scroll down for video. 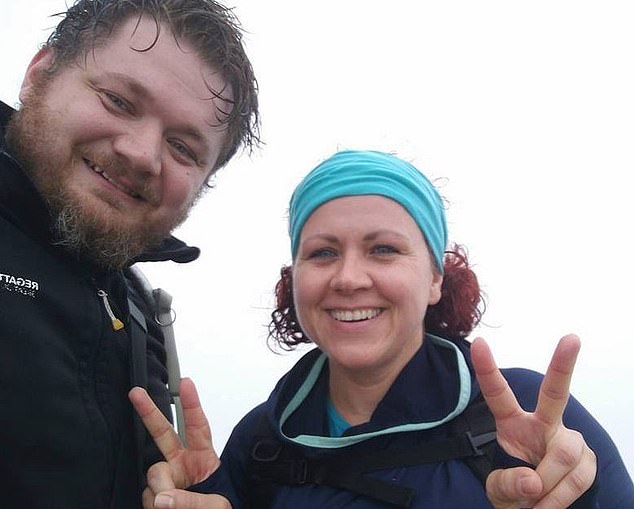 Mr Koczocik charged at 28-year-old Khan and thrust the pike into the attacker’s chest before engaging him in one minute of ‘kill or be killed’ combat (pictured: Mr Koczocik with his girlfriend Kasia)

Commodore Toby Williamson, CEO of Fishmongers Hall, told the BBC: ‘He’s the guy (Mr Koczocik) who cleans the glasses down in the basement and that’s exactly what he was doing when he hears this scream.

‘The scream was so loud that, as a first aider, he makes a choice. He goes towards the trouble. He gets there on the first floor of the building just behind me and it’s pretty clear that there’s a bad guy.

‘Lucasz pulls off the wall this long stick, he charges towards the bad guy, and he impacts him on the chest and there’s clearly something here that is protective and it doesn’t make any sort of impact.

‘But he’s buying time. He allows others to escape, to move to adjacent rooms. At that point he’s got about one-minute of one-on-one straight combat.’

Cdre Williamson described how Khan managed to dodge and work his way up Mr Koczocik’s pole, slashing five wounds into the porter’s left side.

But then two other men involved in the charity came in and joined the fight with a fire extinguisher and a narwhal tusk. 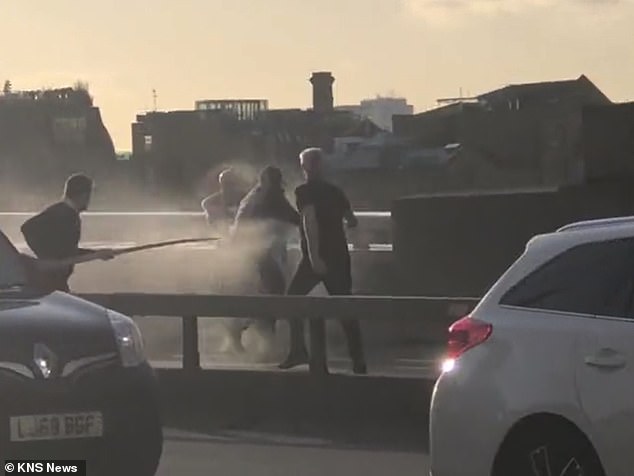 Cdre Williamson described how a brutal showdown spilled into the great hall. Khan attempted to flee down the main staircase to the front-door.

But he was unable to get out because the doorman, Gareth, is holding the door fast so that another worker, Dawn, can ring the emergency services.

At this point Khan shifted his attention to two cloakroom girls, Alla and Sandra, who Cdre Williamson said had a ‘hell of a time.’

But by this stage Mr Koczocik is back ‘leading the charge’ and then maintenance man Andy, an ex-policeman and ‘pretty cool customer’, joins the melee. 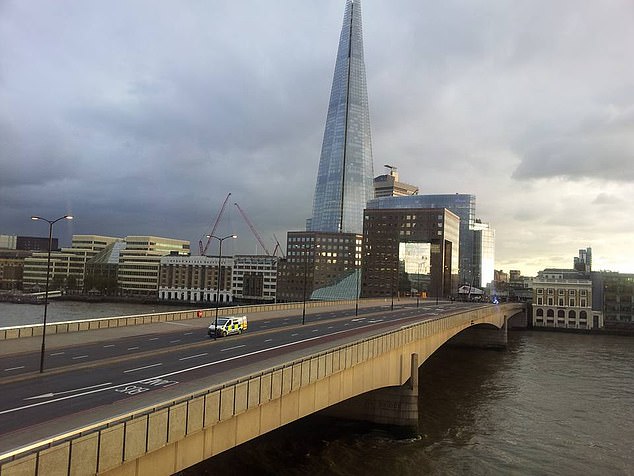 Mr Koczocik previously photographed London Bridge in 2015 after it appeared to be have been cleared by emergency services in an unknown incident. He captioned it: ‘Bomb attack on London bridge.’ 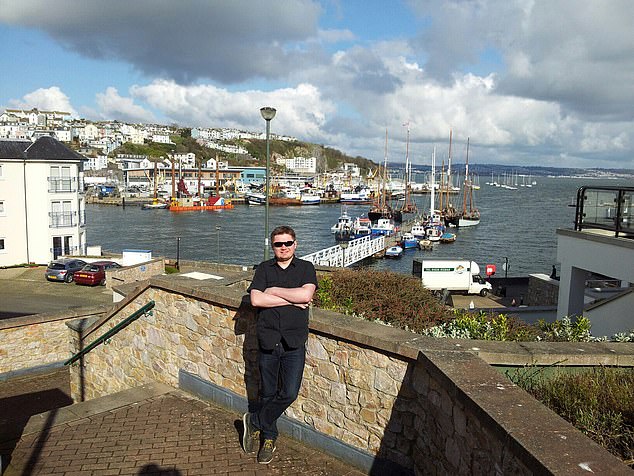 Mr Koczocik in a recent social media post. Cdre Williamson described how Khan managed to dodge and work his way up Mr Koczocik’s pole, slashing five wounds into the porter’s left side. Mr Koczocik was released from hospital on Saturday

Andy was stabbed through the chest by Khan, but still paused for a moment, reluctant to allow the carnage to spill out onto the street, before realising he would have to.

He relented and let Khan fall out onto the street, with Mr Koczocik barrelling straight out of the threshold after the terrorist.

He was backed by the man wielding the narwhal tusk and the one with fire extinguisher in pursuing Khan down London Bridge.

Footage showed the men bravely going after Khan with other members of the public before he was tackled to the ground. 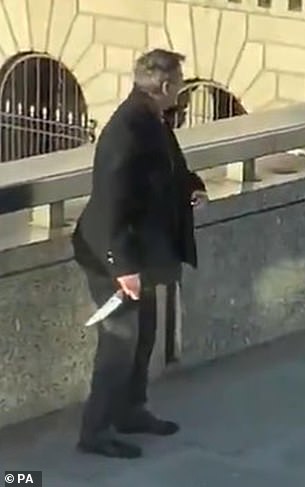 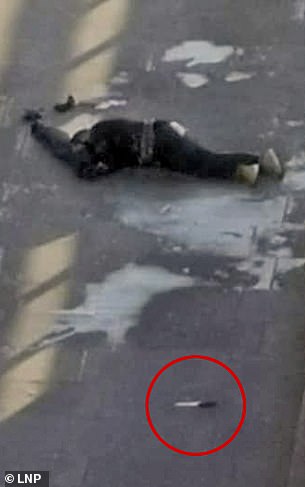 One of the bystanders on London Bridge was seen holding a knife (left) which appeared to have been taken from the suspect. Another man – believed to be the knifeman – could be seen lying on the ground, close to a knife (circled, right)

Khan was shot in the chest by armed police officers shortly afterwards. He had been wearing a mock suicide vest.

Yesterday it emerged Mr Koczocik was being put forward for an official honour in Poland, acknowledging his ‘sacrifice and courage’.