By Ryan Morrison For Mailonline

A microbe that is able to break down plastics used in furniture, fridges and other products could be the answer to solving the plastic pollution problem.

Scientists from the Helmholtz Centre for Environmental Research-UFZ in Leipzig identified a bacteria that can break down the problem material.

The tiny organism is capable of degrading polyurethane – a plastic material used in everything from furniture to fridges.

Polyurethane accounts for 3.5 million tons of plastic produced in Europe each year and it difficult to recycle as it is impossible to melt when heated.

A microbe that is able to break down plastics used in furniture, fridges and other products could be the answer to solving the plastic pollution problem. Stock image

It has lightweight, insulating and flexible properties making it perfect for use in bedding, shoes, buildings and car parts.

The waste mostly ends up in landfills where it releases toxic chemicals – some of which have the potential to cause cancer.

The team of German researchers have identified a microbe that could put an end to this problem of stockpiling polyurethane plastic waste.

The team isolated the bacterium Pseudomonas sp. TDA1 from a site rich in brittle plastic waste that shows promise in attacking the chemical bonds that make up Polyurethane plastics.

They identified the degradation pathways and factors that help the microbe metabolise certain chemical compounds in plastic for energy to live.

Study co-author Dr Hermann J. Heipieper, a senior scientist at the Helmholtz Centre for Environmental Research-UFZ in Leipzig, said: ‘There may be a small answer to one of the biggest problems on the planet. 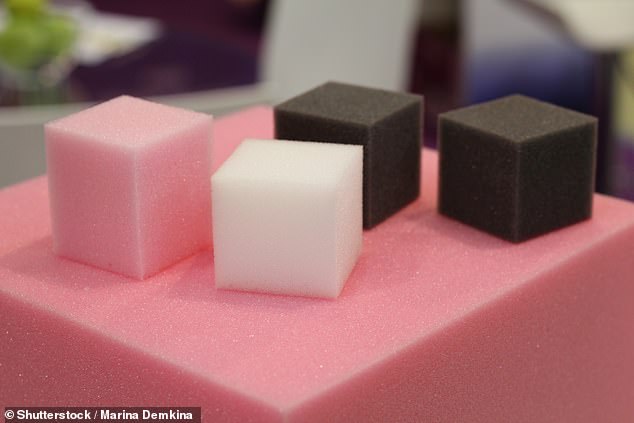 Brightly coloured Polyurethane foam rubber for furniture factories. The waste mostly ends up in landfills where it releases toxic chemicals – some of which have the potential to cause cancer

‘The bacteria can use these compounds as a sole source of carbon, nitrogen and energy and represent an important step in reusing hard-to-recycle products.’

The research was part of an EU scientific program which is trying to find microorganisms that can bioconvert oil-based plastics into fully biodegradable ones.

Scientists are also testing if microbes can break down polyethylene terephthalate (PET) plastics which are widely used in water bottles.

The findings were published in the journal Frontiers in Microbiology.

HOW MUCH PLASTIC POLLUTION DO WE BREATHE IN PER DAY?

Plastic pollution has become so widespread that we may be inhaling up to 130 tiny pieces a day, research found.

Fibres from fleece and polyester clothing and particles from urban dust and car tyres are the biggest sources of so-called microplastics in the air. 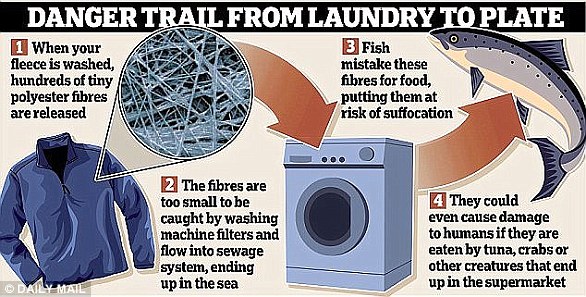 Microplastics are small plastic pellets ranging in size from 0.5 millimetres that have accumulated in the marine environment following decades of pollution. They include polyester fibres generated from laundry

The tiny specks are lighter than air and could cause asthma, heart disease and auto-immune conditions, the research, published in December 2017, found.

The study, a review of a number of recent plastics studies, revealed washing a single polyester garment can produce 1,900 plastic fibres. 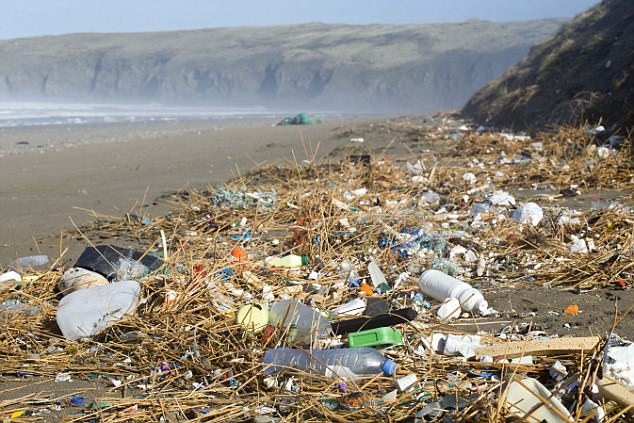 Plastic pollution has become so widespread that we may be inhaling up to 130 tiny pieces a day, research found (stock image)

This plastic pollution is on the rise as more and more synthetic clothing is produced.

While only people working with plastic fibres are known to develop respiratory problems, experts say the pollution is so widespread that it may now pose a risk to everyone’s health.

The study’s author, Dr Joana Correia Prata, of Fernando Pessoa University in Portugal, said: ‘The evidence suggests that an individual’s lungs could be exposed to between 26 and 130 airborne microplastics a day, which would pose a risk for human health, especially in susceptible individuals, including children.

‘Exposure may cause asthma, cardiac disease, allergies and auto-immune diseases.’