The Pope’s chief bodyguard has resigned over the leak of a Vatican police memo identifying five Holy See officials being investigated over a £130 million London real estate investment.

The Vatican said Monday its police chief, Domenico Giani, bore no responsibility for the leak but resigned to avoid disrupting the investigation and ‘out of love for the church and faithfulness’ to the pope.

The person who leaked the document to the Italian newsweekly L’Espresso remains unknown.

Giani, a 20-year veteran of the Vatican’s security services, has stood by Francis’ side and jogged alongside his popemobile during hundreds of public appearances and foreign trips.

He also was the chief bodyguard for Pope Benedict XVI, and the Vatican took pains to stress his ‘unquestionable faithfulness and loyalty’ to the Holy See.

Giani had signed the October 2 memo after his agents raided two Holy See offices – the secretariat of state and the Vatican’s financial intelligence unit – as part of an investigation by Vatican criminal prosecutors into alleged financial irregularities surrounding a 150 million euro investment into London real estate.

It involved the development of 49 luxury apartments in Chelsea’s Sloane Avenue using funds from the Vatican’s Swiss accounts, according to the Financial Times.

The deal, which allegedly resulted in middlemen ripping off millions of euros from the Holy See over the past decade, has itself raised questions about the Vatican’s murky finances and poor investment strategies in the past decade.

The raids and related suspensions, launched following more recent efforts to recover some of the lost money, were highly unusual for the Vatican and sparked fresh speculation about its Machiavellian turf battles, power struggles and score-settling. 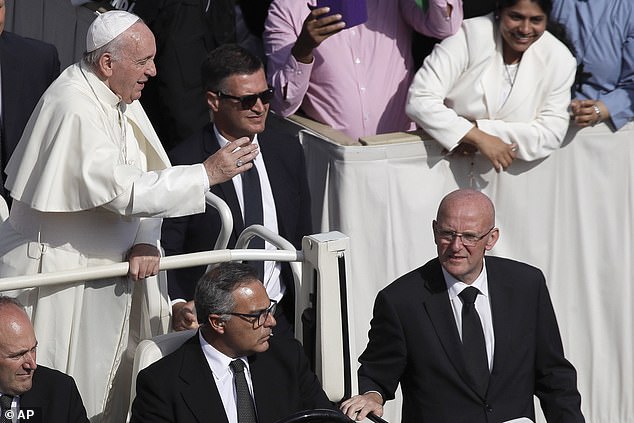 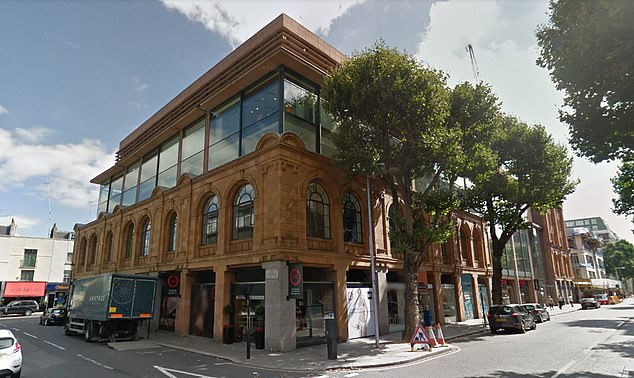 The investigation surrounds £130million in Vatican funds invested in the development of 49 luxury apartments at 60 Sloane Avenue in Chelsea, according to reports 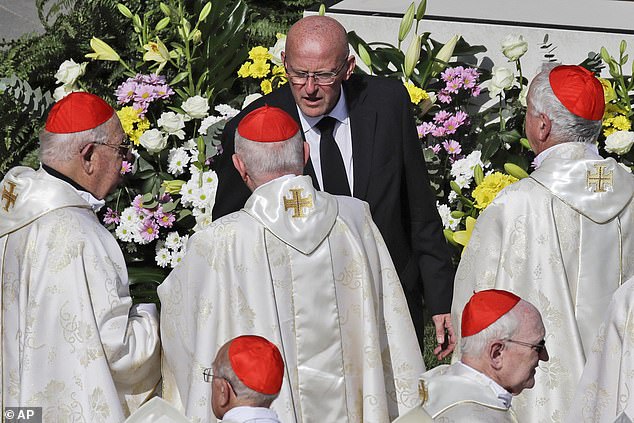 Giani, top center, speaks to a group of cardinals during a canonization Mass over the weekend

That the alleged leaker remains unknown has added to the mystery surrounding the case, which has implicated high-ranking Vatican cardinals and monsignors.

In this instance, officials have spoken openly of an institutional crisis, particularly over the raid on the financial intelligence unit known as the Financial Information Authority.

The office shares financial information with counterparts in dozens of countries as part of global efforts to crack down on money laundering, tax evasion and terrorist financing.

National financial intelligence units might be unwilling to share sensitive information with the Holy See if raids were executed without sufficient cause.

To date, the Vatican hasn’t said what, if any, evidence it has of the agency’s wrongdoing.

The decree authorising the search, seen by The Associated Press, said only that the agency’s role in the effort to recover lost funds was ‘not clear.’

International officials familiar with the case said the agency had in recent months been working with its international counterparts to trace financial flows of the middlemen who were accused of defrauding the Vatican in the real estate deal, suggesting the raids were meant to stop the investigation in its tracks before officials inside and out of the Vatican who might be benefiting were caught. 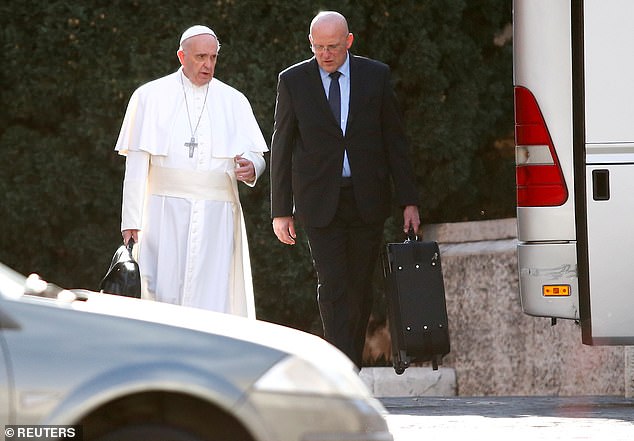 Pope Francis is seen at the Vatican walking next to Domenico Giani, Inspector General of the Corpo della Gendarmeria, the police and security force of Vatican City, before boarding a bus heading to Ariccia, south of Rome in 2017

Giani’s October 2 memo was sent to all Swiss Guards and members of the Vatican gendarmes police force as an internal directive barring entry to the Vatican by the five employees, who were suspended from their jobs as a precaution.

Featuring the employees’ photographs, names and job titles, the directive resembled a wanted poster, even though none of the five was placed under investigation.

L’Espresso and its daily newspaper, La Repubblica, published the directive and it was widely redistributed online.

In a statement announcing Giani’s departure, the Vatican said the publication of the document greatly harmed the employees’ dignity as well as the image of the Vatican gendarmes.

Giani himself said that he was ashamed by the publication and that he felt personally for the five employees. 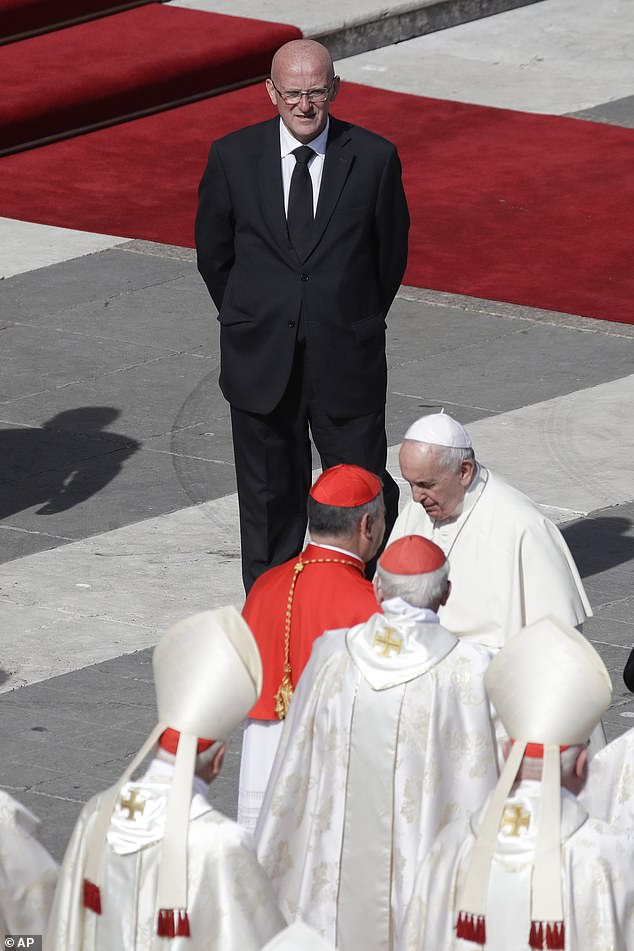 Giani, top, looks at Pope Francis at the end of a canonization Mass in St. Peter’s Square on Sunday 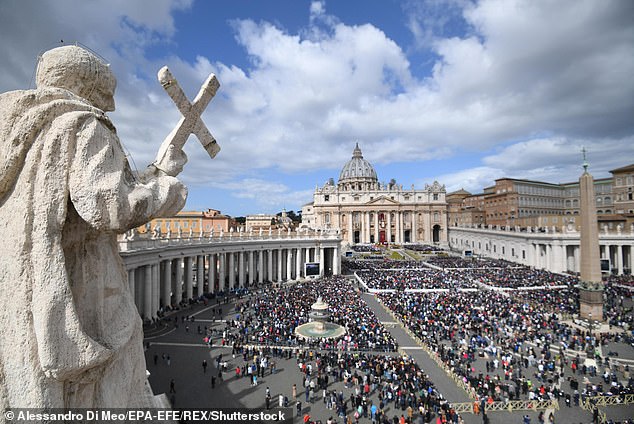 The faithful attending the Easter Sunday mass celebrated by Pope Francis (unseen) on Saint Peter’s square in the Vatican City, Vatican, in 2018

‘Having always said that I would be willing to sacrifice my life to defend the pope, I took the decision to resign with the same spirit, and to not in any way harm the image and activities of the pope,’ he told Vatican media.

Francis met with Giani in recent days and thanked him for his service, professionalism and willingness to step aside as ‘an expression of freedom and institutional sensitivity,’ the Vatican said.

Giani joined the Vatican police force as the deputy police chief in 1999 after a stint in Italy’s financial police and the information department of the Italian premier’s office. He was named director of Vatican security services in 2006.