Sun-seekers headed to park and beaches today as temperatures soared to nearly 80F as coronavirus lockdown restrictions continued to be eased.

Day trippers arrived early to popular beauty spots like Bournemouth beach and King Edward’s Bay near Tynemouth to soak up the warmth and enjoy a splash around in the water.

Conditions are expected to stay warm for the whole week in the UK – especially in South East England, where the mercury got up to 80F (27C) yesterday – and could rise further to 82F (28C) by the weekend. 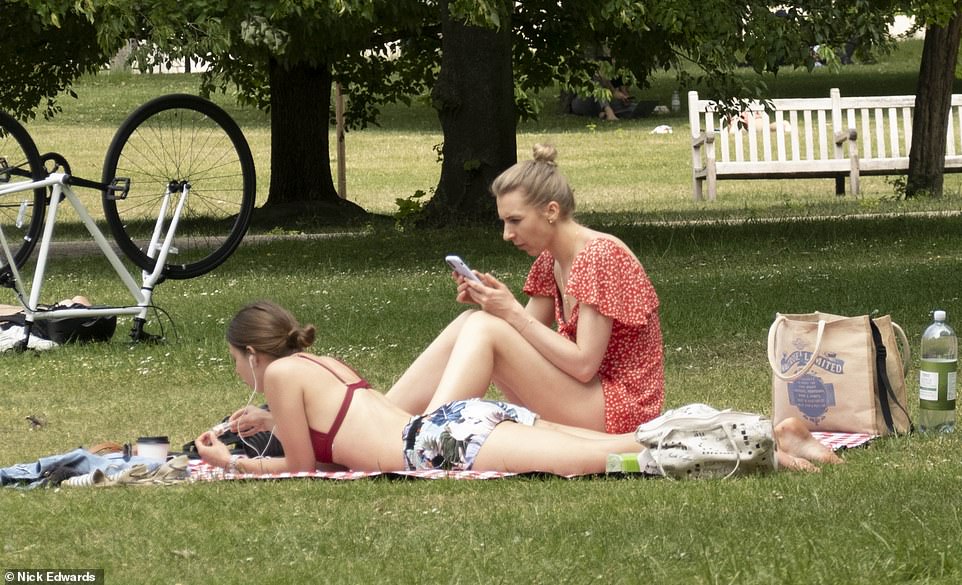 Two women enjoying some drinks in St James’ Park, London as lockdown measures continue to be eased in England 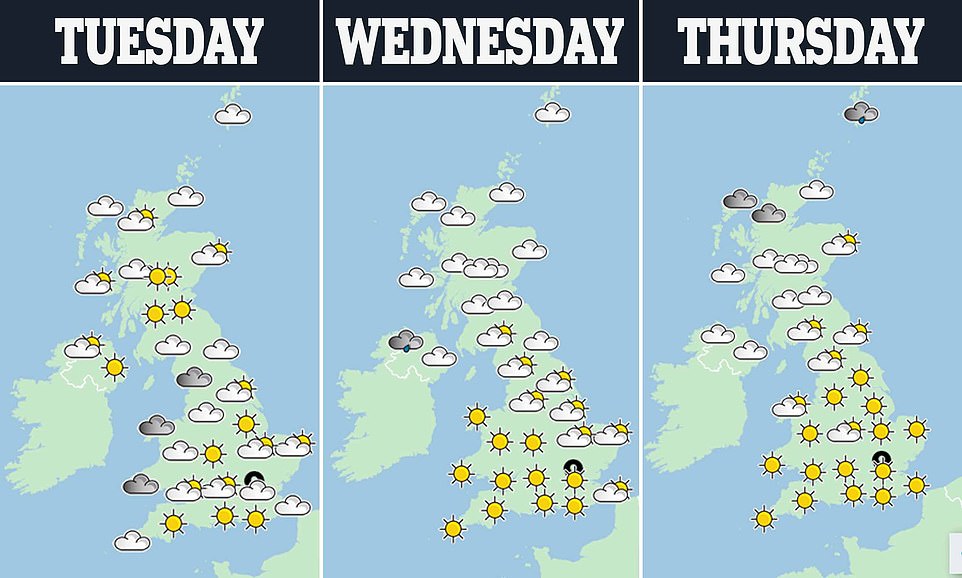 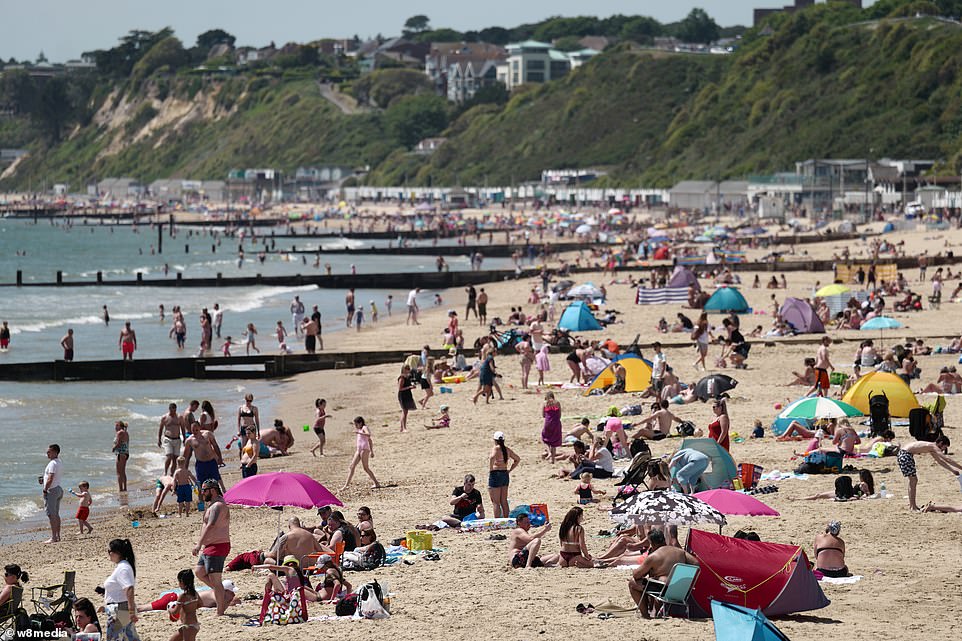 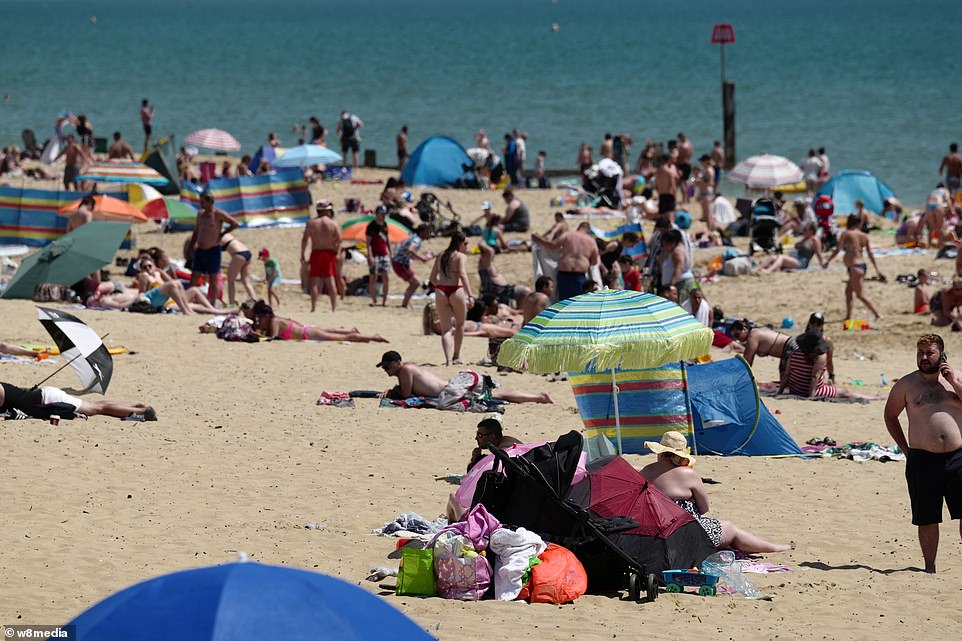 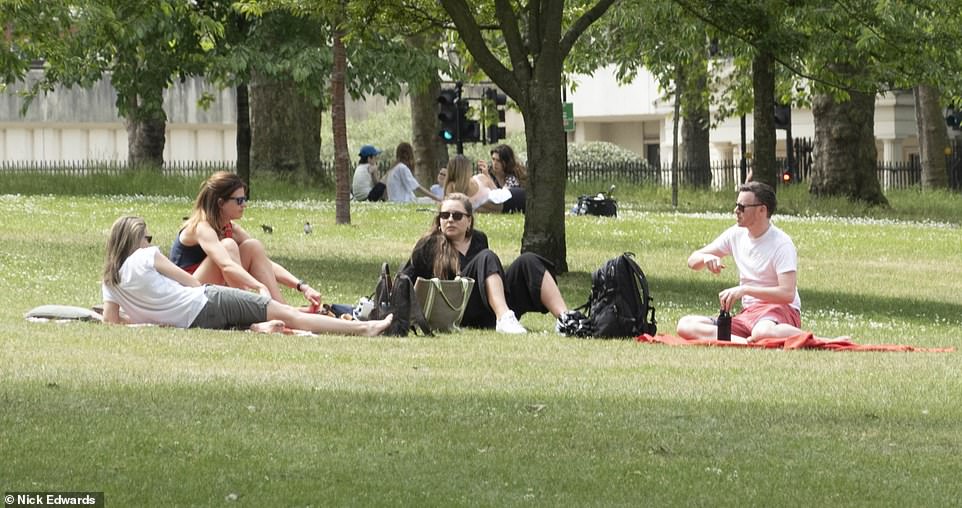 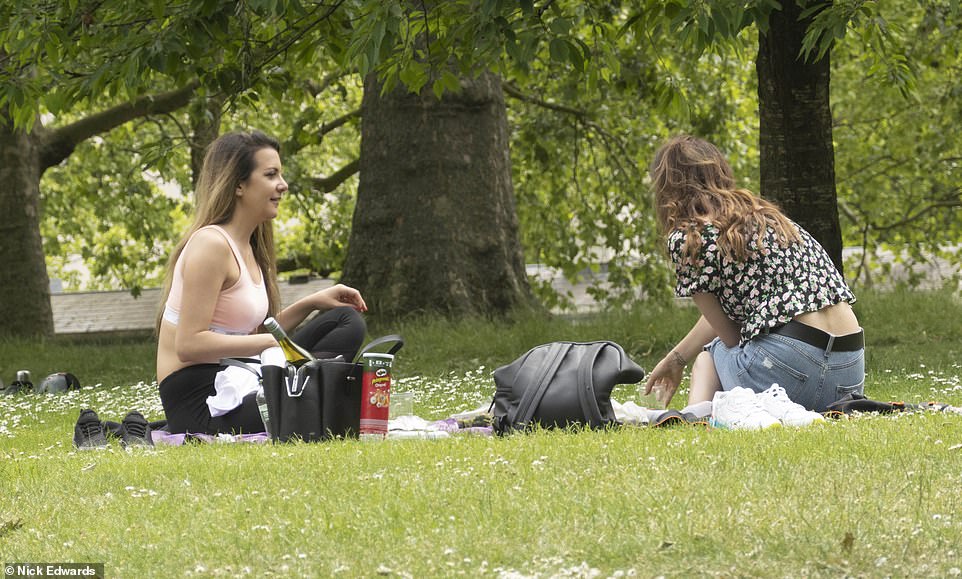 Conditions are expected to stay warm for the whole week in the UK – especially in South East England. Pictured are women in a park in London 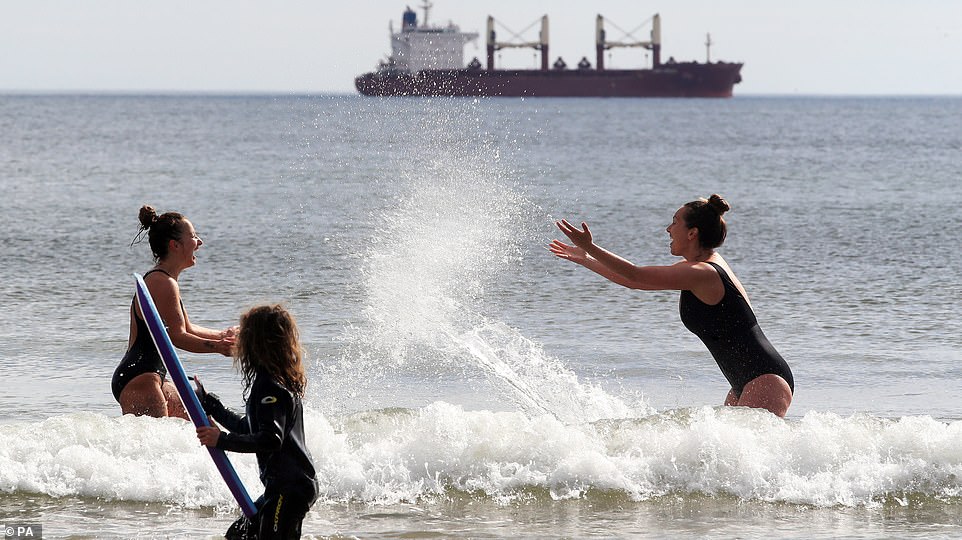 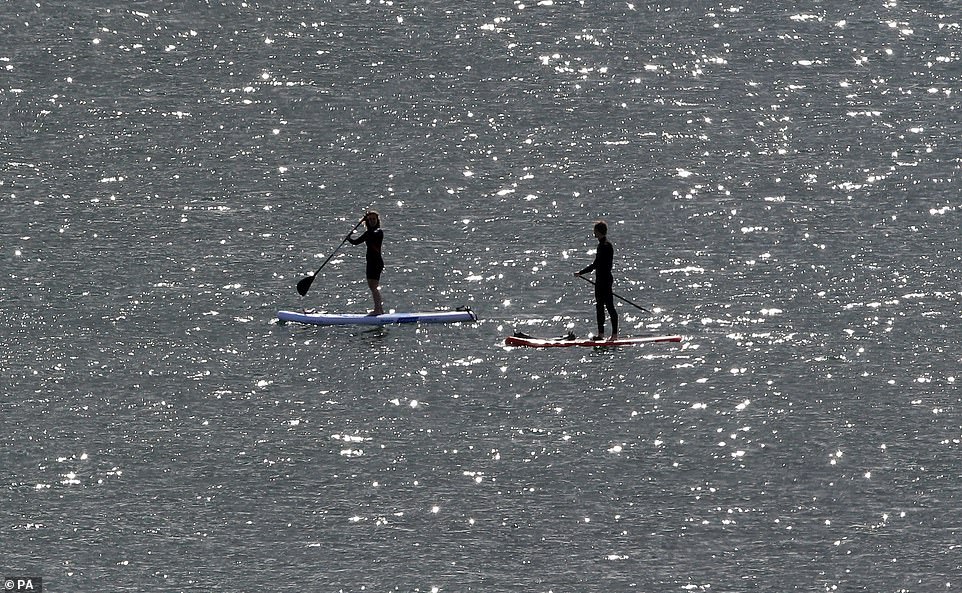 People paddle boarding at King Edward’s Bay near Tynemouth today, as the public were being reminded to practise social distancing during the good weather

The temperatures in London was just under 80F at midday – the highest currently in the UK.

A Met Office spokesman said: ‘On the whole, with the exception of a couple of blips, the week ahead is going to be largely dry with plenty of sunny spells. It’s not good news if you’re after rain, but other than that it’s good news.

‘Today will start with odd spells but through the course of the day most of that rain will have fizzled out. It will be quite widely across the 20Cs today, with the possibility of much warmer temperatures in the South East.

‘Lots of dry weather for the second half of the week with plenty of sunshine. For the weekend coming up we may even see higher than 28C. For many of us this week will be largely dry, lots of sunny spells and feeling very warm.’

Yesterday, police were called to a lido in North London amid reports of one large group gathering, while people were also warned not to overcrowd beaches as sunseekers made the most of the fine weather.

With schools in England, Scotland and Wales on a half-term break this week, large numbers of people are expected to emerge from lockdown amid warm conditions.

There will be more warm weather in the South today, where people flocked to Bournemouth beach yesterday, prompting the council to remind people there were ‘other less busy but equally lovely open spaces to enjoy’.

Aside from some rain for the far north and north-west tomorrow, for the rest of the week the weather in most parts of the country will be dry, largely sunny, and very warm, the Met Office said.

A week after the relaxation of guidelines to allow people to visit beauty spots in England, the Government and the police have urged people to continue to follow social distancing guidelines.

‘Please use common sense when it comes to social distancing,’ the Metropolitan Police’s Hillingdon branch tweeted. 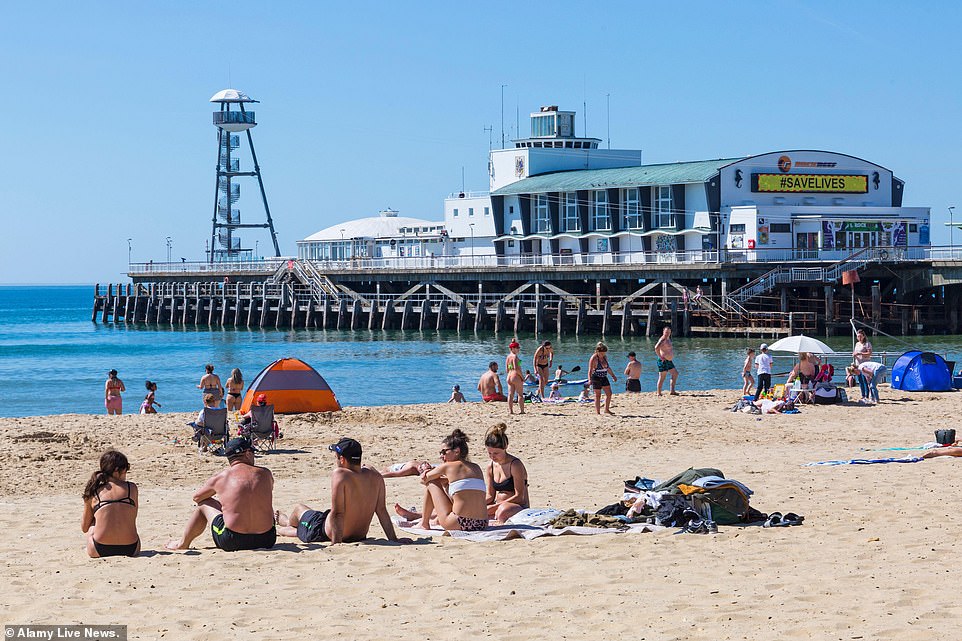 Day-trippers on Bournemouth beach in Dorset this afternoon, as the spring heatwave continued across most of the UK 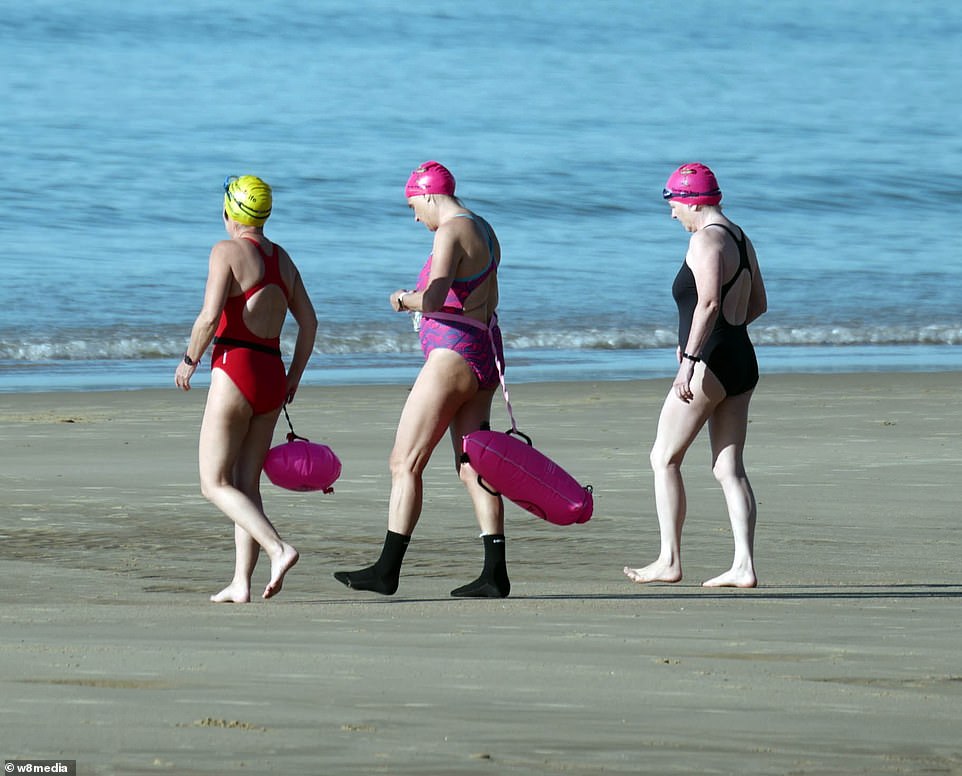 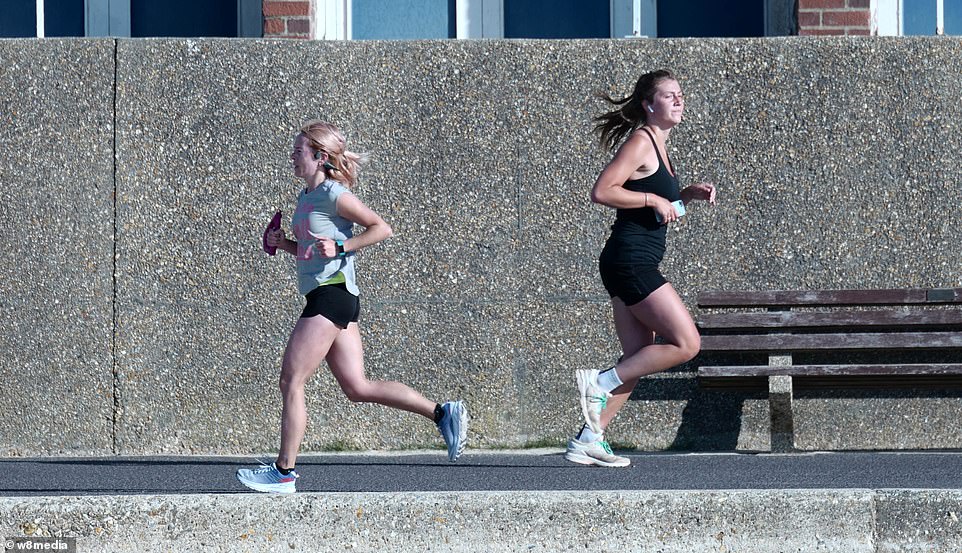 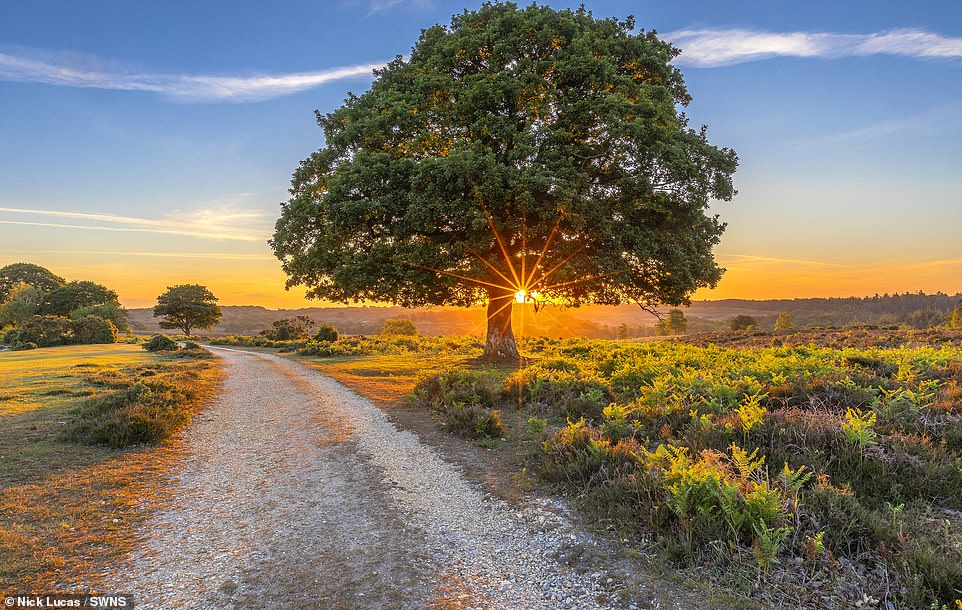 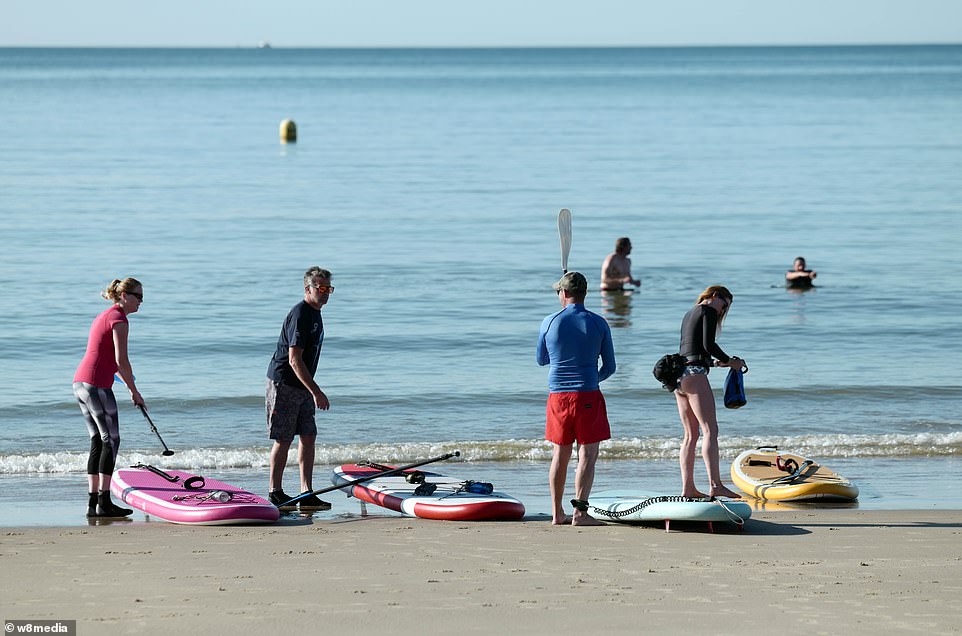 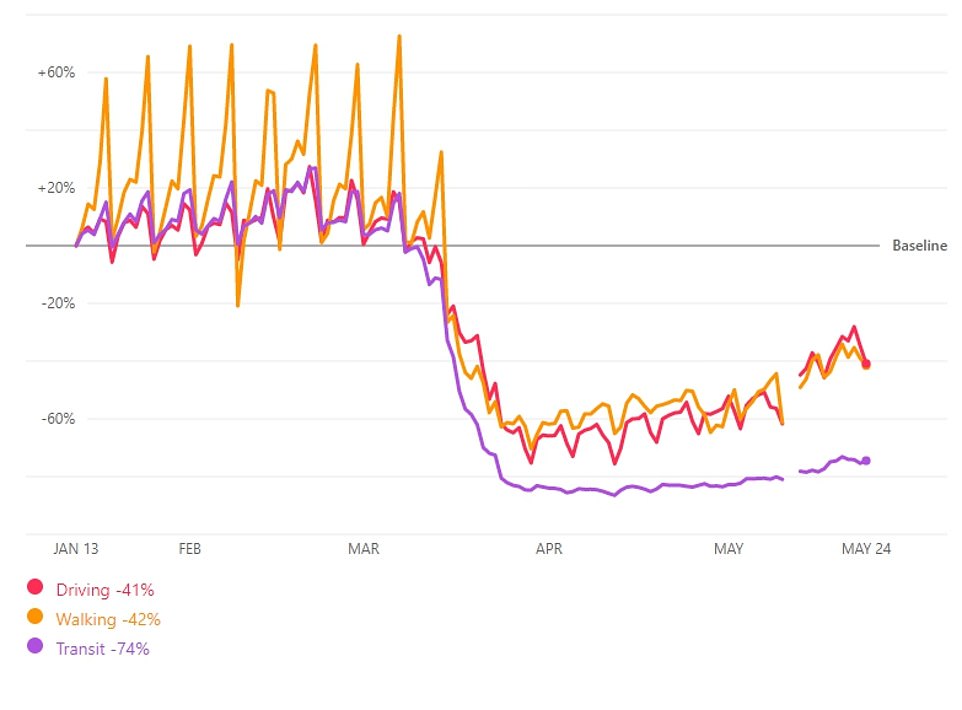 Traffic levels have been rising in the last few weeks as the coronavirus lockdown began to ease. Walking has seen less of a drop than public transport – which has largely been shut down, Apple data shows 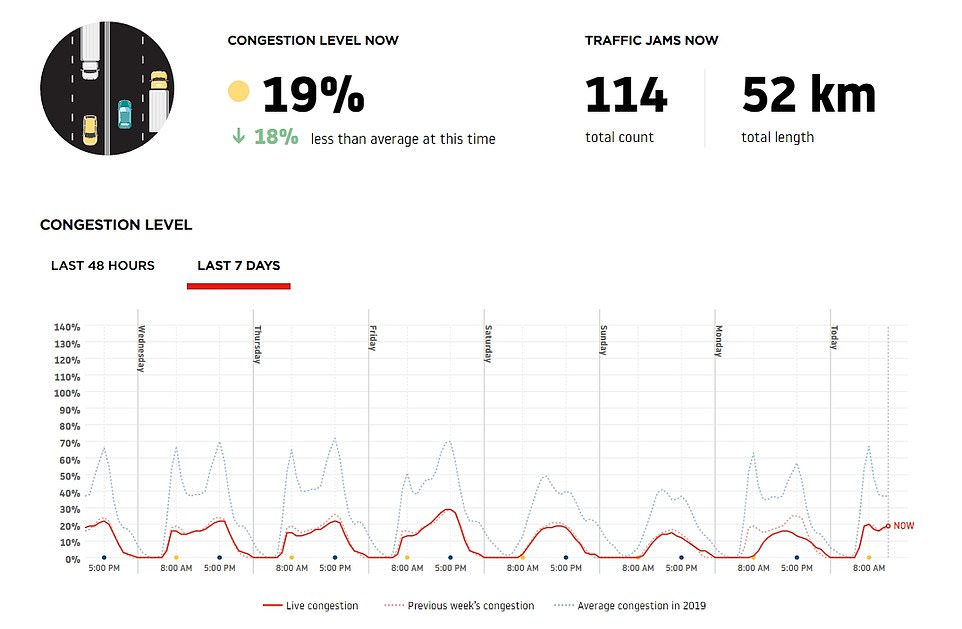 In London, traffic levels are still 18% lower than normal, and are roughly similar to the level from this time one week ago, according to TomTom traffic data 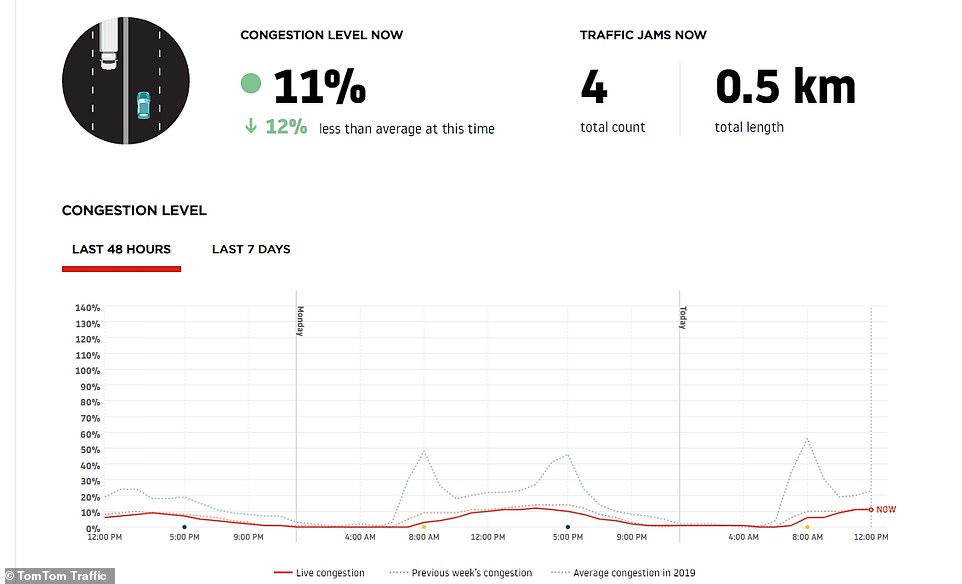 Glasgow has just four traffic jams and an average congestion level of 11%, which is still less than normal compared to several months ago 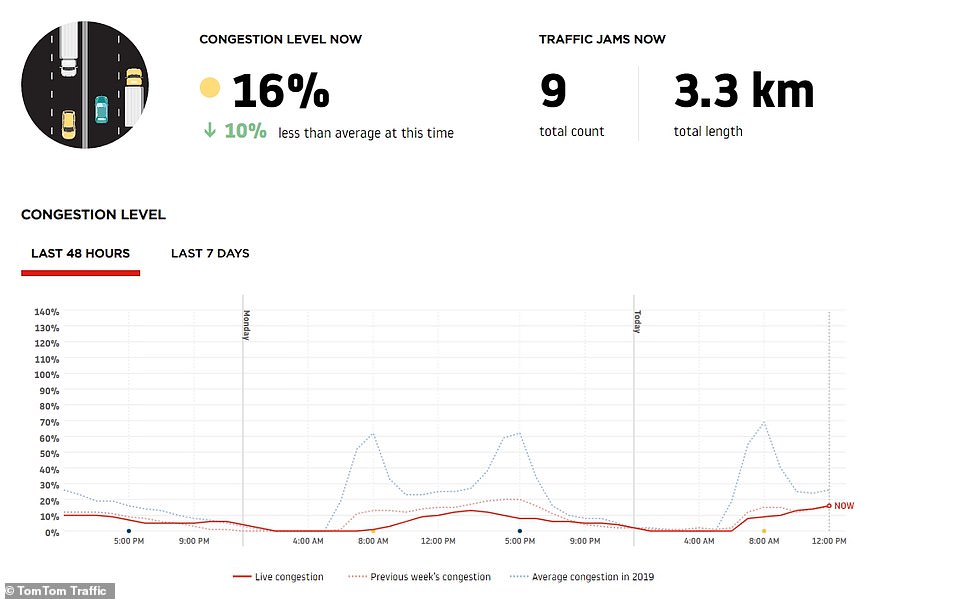 Manchester has 10% fewer traffic jams than normal. This graph shows how the number of cars on the road has been slowly growing since first thing this morning 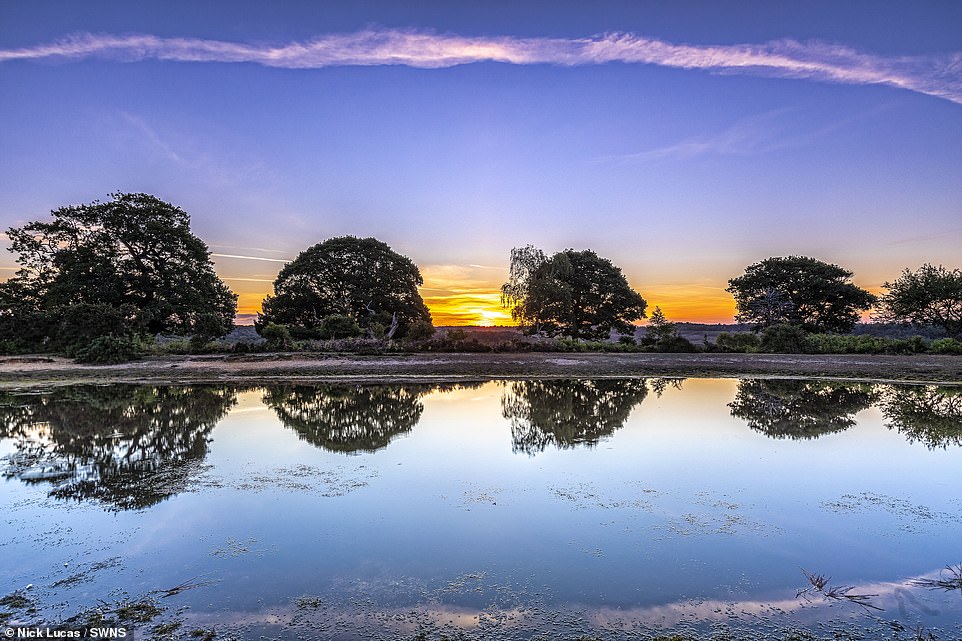 Many said they felt their decision to travel to beauty spots had been justified by Dominic Cumming’s 260-mile trip to Durham during lockdown and the Prime Minister’s subsequent support for his actions.

Apart from crowds at beaches yesterday, long stretches of traffic were also seen at the Yorkshire Dales, while walkers were also out enjoying the grounds of Windsor Castle.

While new cases and deaths from coronavirus have fallen nationally, a hospital in Somerset was forced to close this weekend due to a high number of Covid-19 patients.

Weston General Hospital, in Weston-super-Mare, stopped accepting new admissions, including into its A&E department from 8am yesterday.

As the hospital shut as a precautionary measure, some residents in Weston reported concern over high numbers of people enjoying a day at the seaside.

Two people died in separate incidents along the Cornwall coastline after warnings RNLI lifeguards would not be able to patrol Britain’s beaches.

It is hoped lifeguard patrols will return to 70 beaches, which will be chosen based on risk and popularity, by peak season. 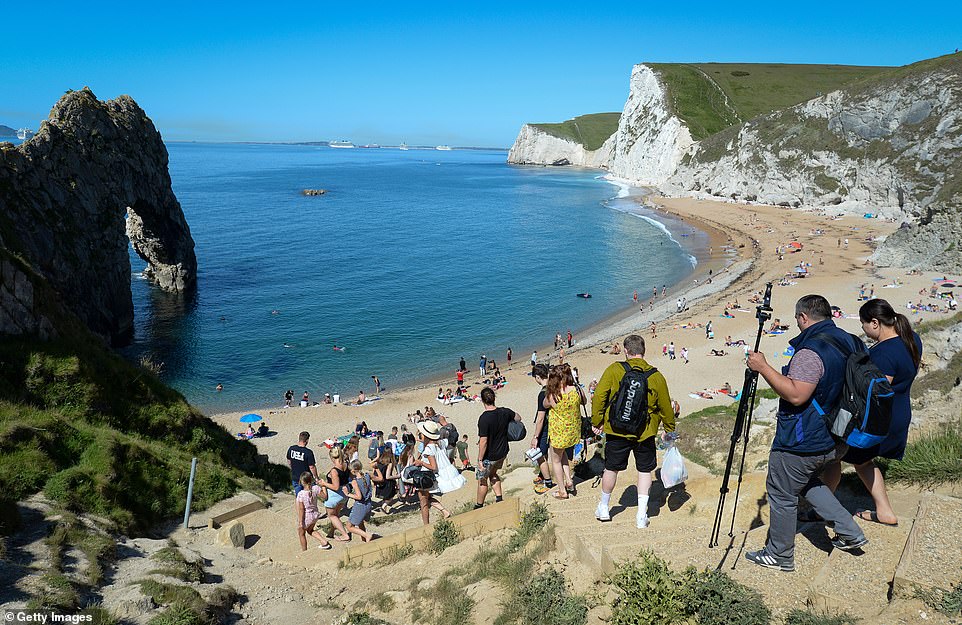 People make their way down steps yesterday to enjoy the hot weather at Durdle Door beach in West Lulworth, Dorset 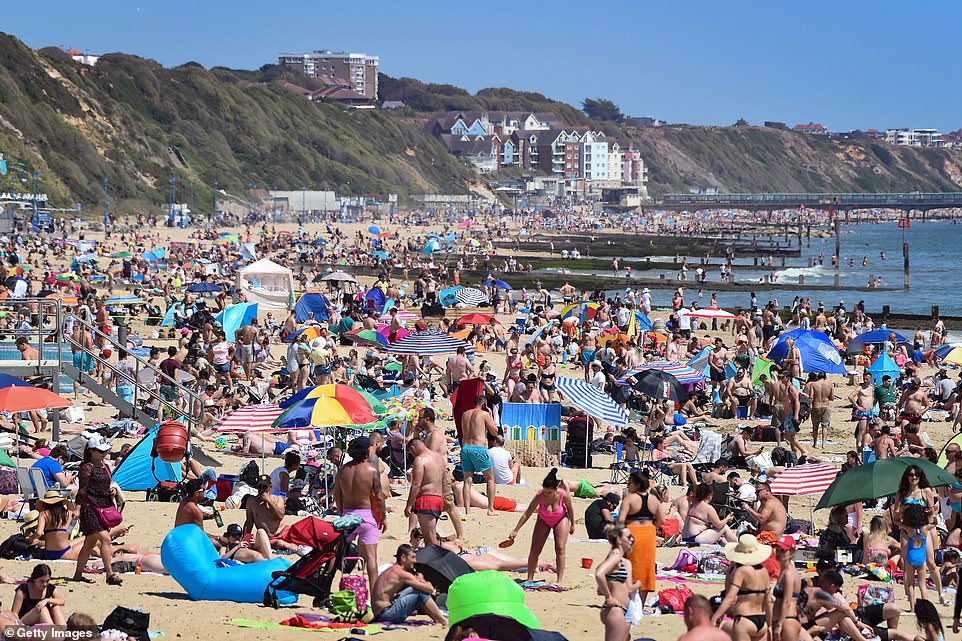