The Turkish President has defended his attack on northern Syria, saying he decided to act after world leaders failed to stem the tide of refugees arriving in his country.

Recep Tayyip Erdogan said the international community either needs to back his mission to open up a ‘peace corridor’ in Kurdish territory to resettle some 2million displaced people, or else begin accepting those people themselves.

The Turkish invasion entered its seventh day on Tuesday, with heavy fighting reported in the early hours around the border city of Ras al-Ayn.

Turkish forces opened fire with artillery and carried out at least one airstrike after a major Kurdish counter-attack overnight seized back parts of the border crossing point.

Despite Erdogan’s claims that his attack would help the refugee situation, Kurdish forces said some 275,000 people including 70,000 children have already been displaced by the fighting.

Major fighting was underway Tuesday in the city of Ras al-Ayn, with Kurdish forces launching a counter-attack after being reinforced by the Syrian army. Syrian army troops also reinforced positions in Ain Issa ahead of an expected counter-attack on Tel Abaid. Turkish troops and Syrian rebels were also massing on the outskirts of Manbij, ready for an attack 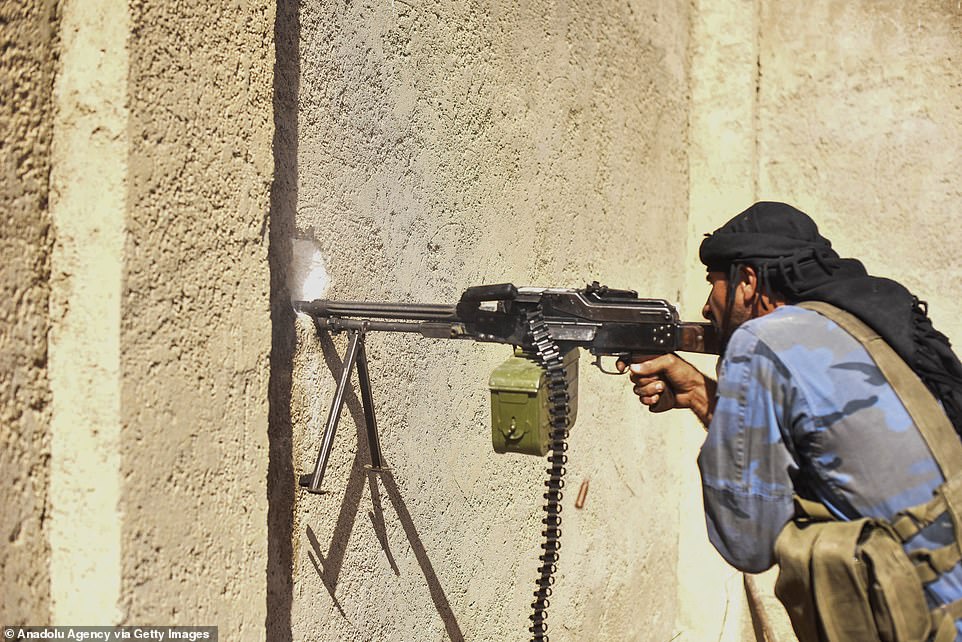 A member of the Free Syrian Army, a rebel group backed by Turkey, fires through a concrete wall during fighting around the city of Ras al-Ayn on Tuesday 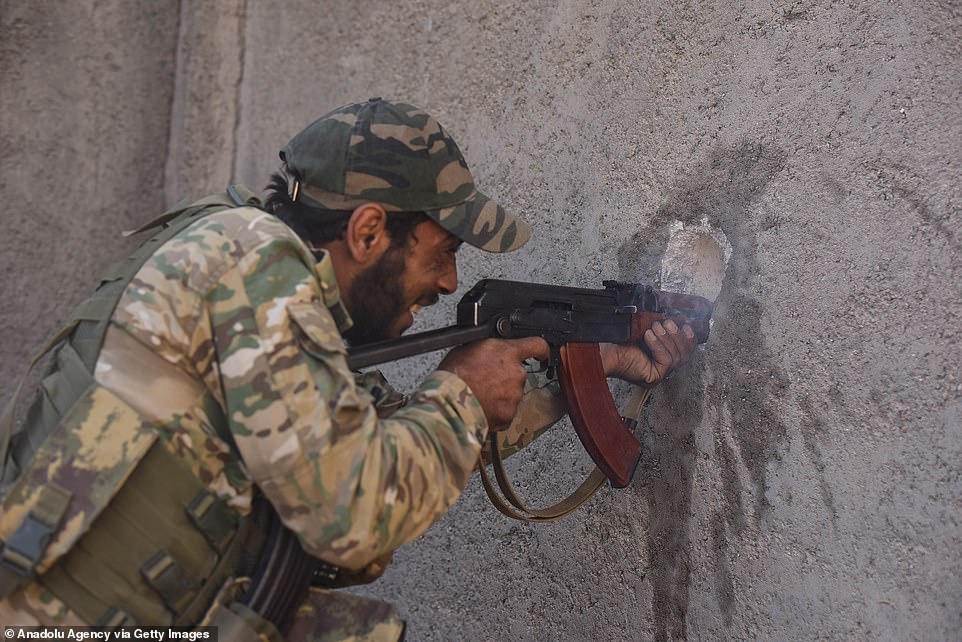 A Turkish-backed rebel soldier fires through a gap in a concrete wall during clashes in Ras al-Ayn, which has come under heavy attack by Kurdish forces, on Tuesday 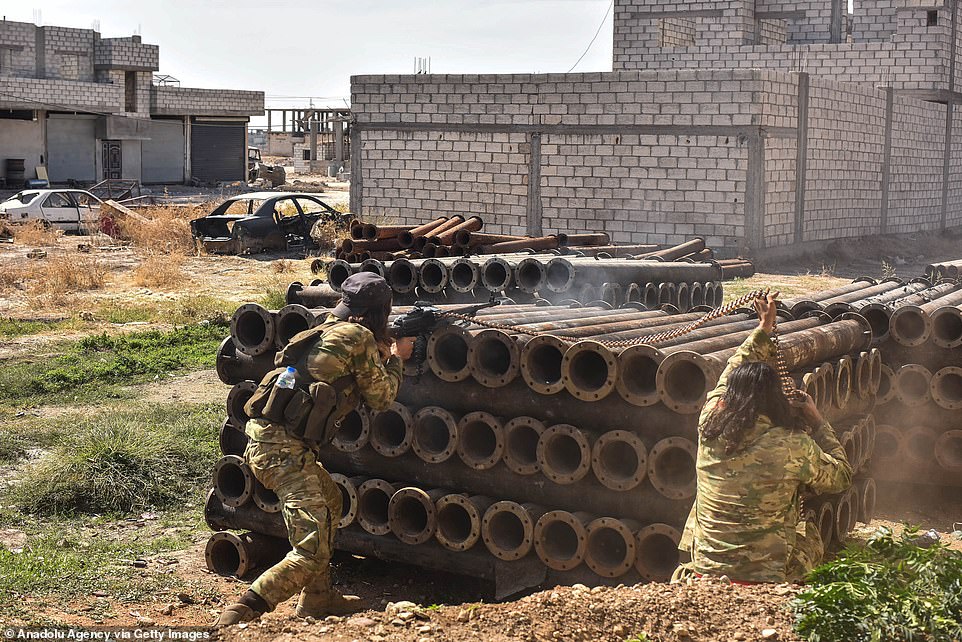 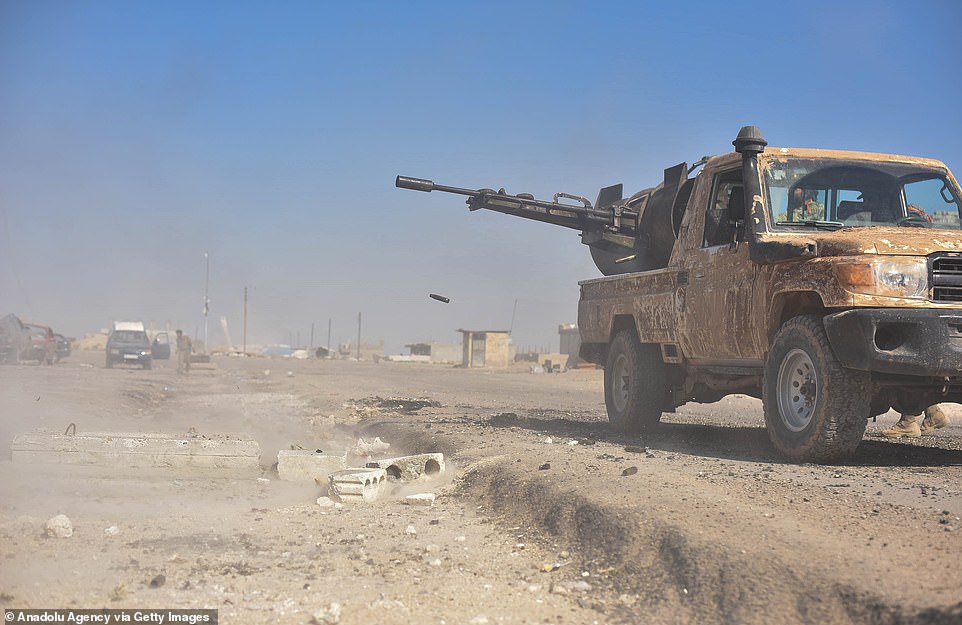 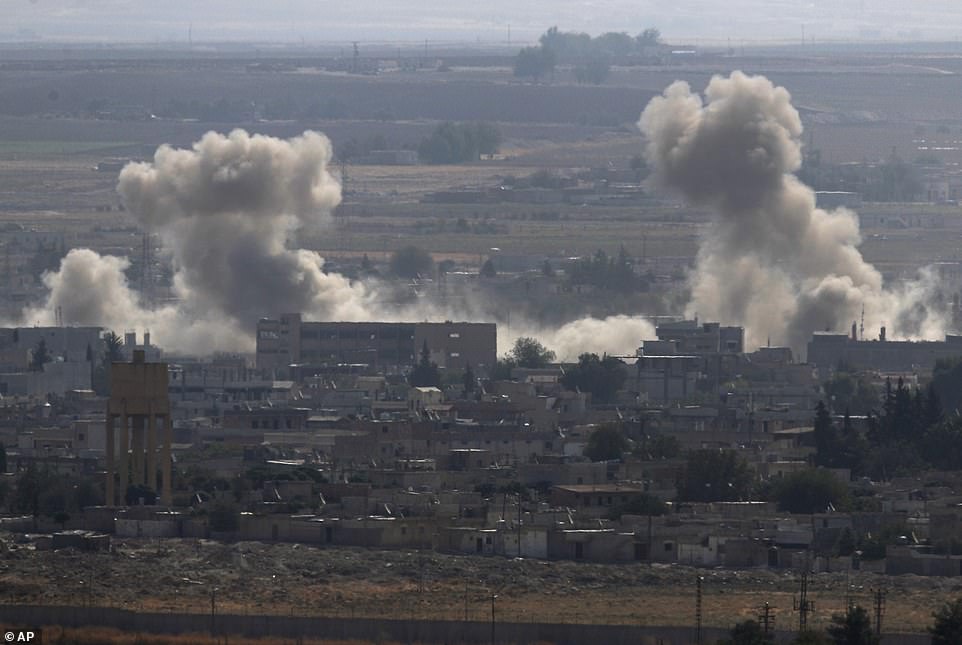 Clouds of dust rise over Ras al-Ayn after Turkish artillery struck the city, with at least one air strike carried out early Tuesday 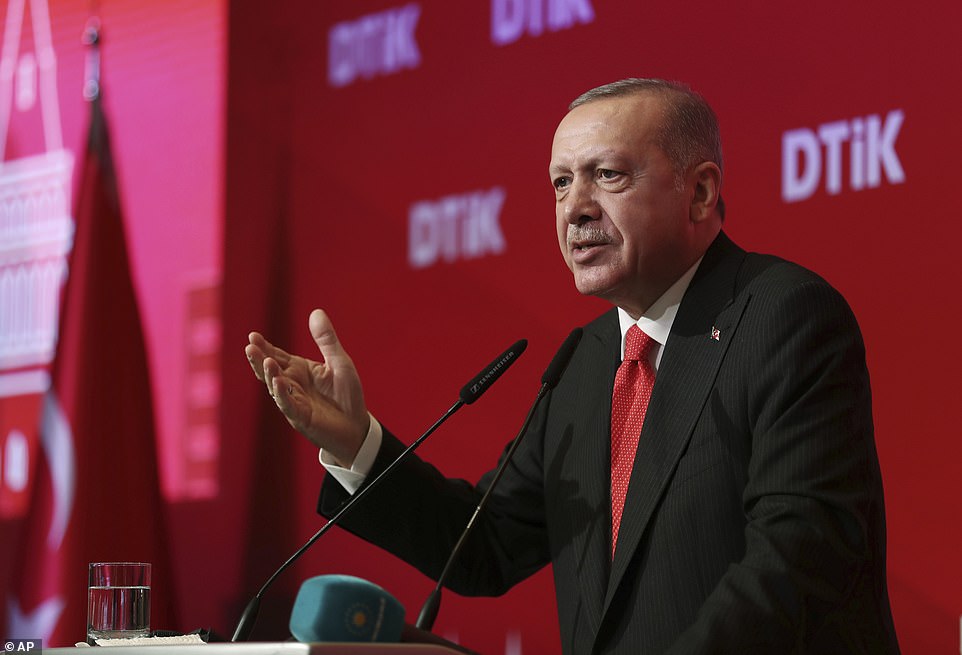 President Erdogan has defended his attack on northern Syria, saying he acted after world leaders failed to stem the tide of refugees coming to Turkey – and told governments to either back him or begin admitting refugees themselves

The Syrian Observatory for Human Rights said ‘fortifications, tunnel networks and a continuous supply of reinforcements’ had enabled the SDF to hold off Turkish efforts to take the town.

Syrian rebel forces and Turkish army units were also pictured massing near the Kurdish-held city of Manbij, after Erdogan announced he was ready to attack.

Erdogan spoke out after EU leaders agreed to restrict arms sales to Turkey, while America imposed heavy sanctions and called for a ceasefire.

However, Erdogan showed no signs of slowing the assault down Tuesday, as he said the attack would not stop until our objectives have been achieved’.

‘God willing, we will quickly secure the region stretching from Manbij to our border with Iraq and ensure that, in the first stage, one million, and then two million Syrian refugees return to their homes on their own free will,’ he said.

Writing in the Wall Street Journal, the Turkish President also sought to allay fears that some 100,000 ISIS members currently held by Kurdish forces will escape during the onslaught.

But he added that Western countries were hypocritical to worry that Turkey’s operation against Kurdish militants risked a mass escape of jihadists.

‘The same countries that lecture Turkey on the virtues of combating ISIS today, failed to stem the influx of foreign terrorist fighters in 2014 and 2015,’ Erdogan wrote.

The United States slapped sanctions on Turkey Monday as it demanded an end to the military operation, accusing its NATO partner of putting civilians at risk and allowing the release of extremists. 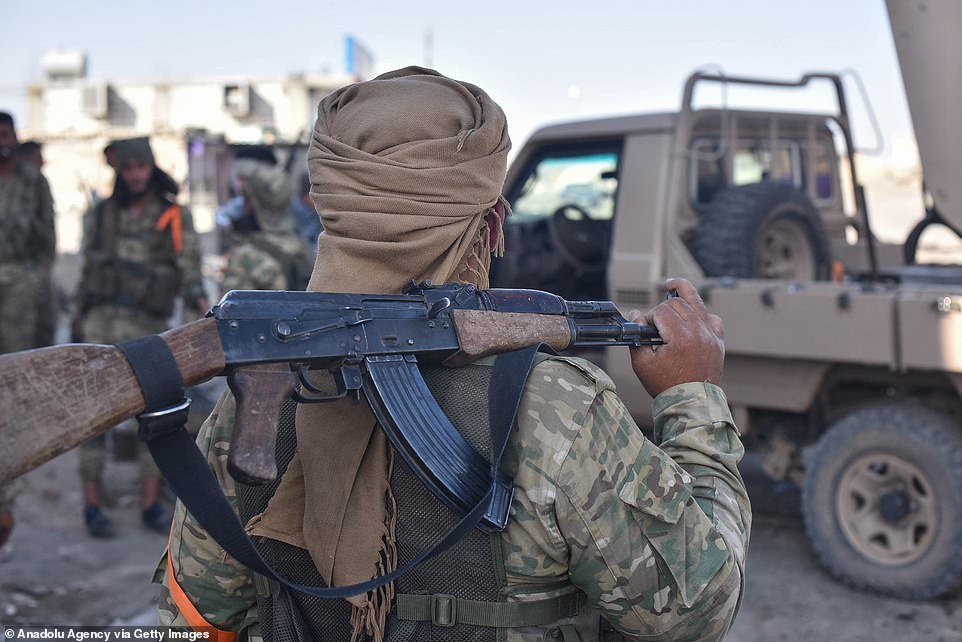 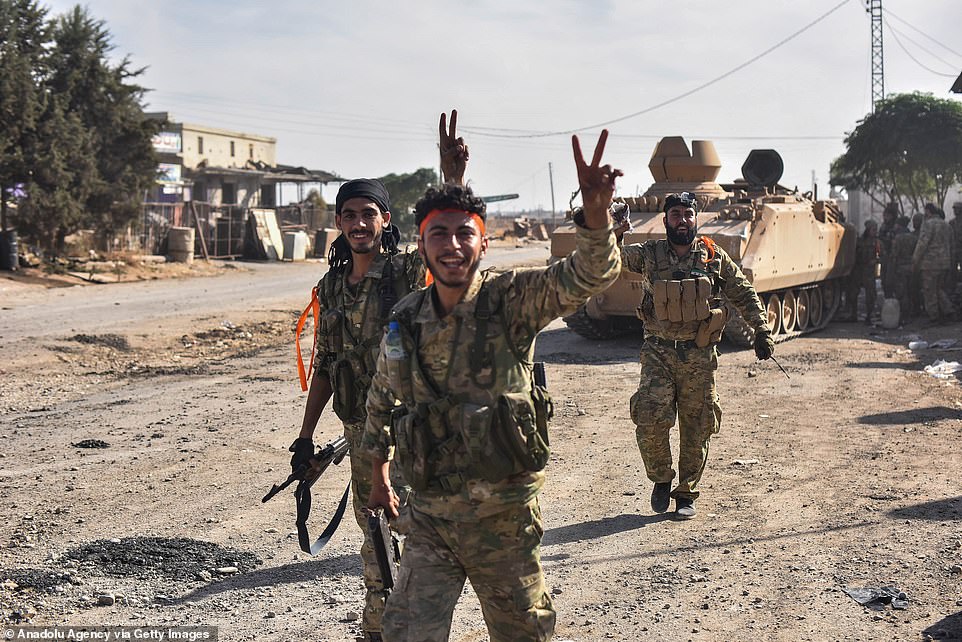 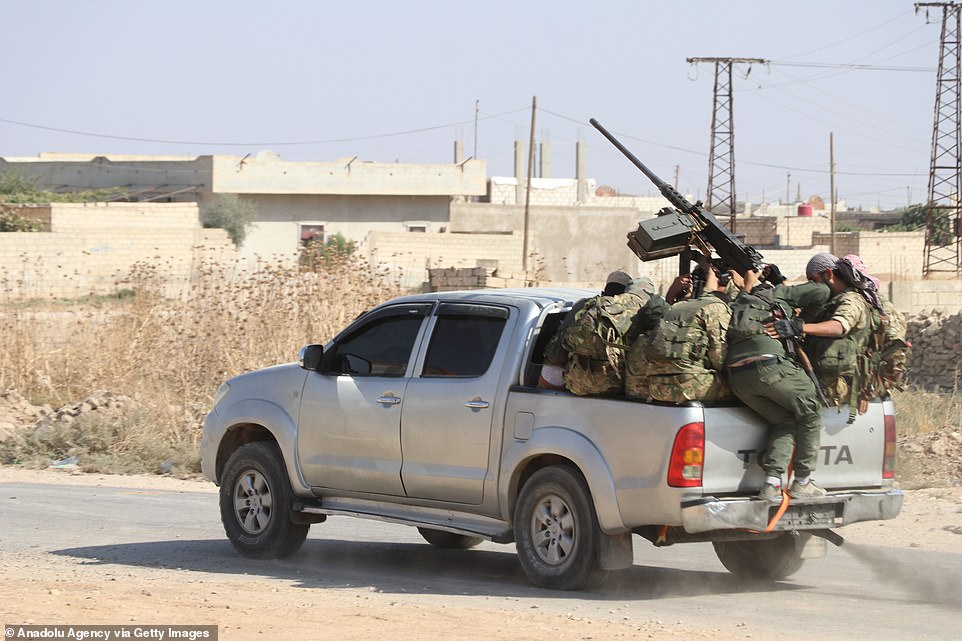 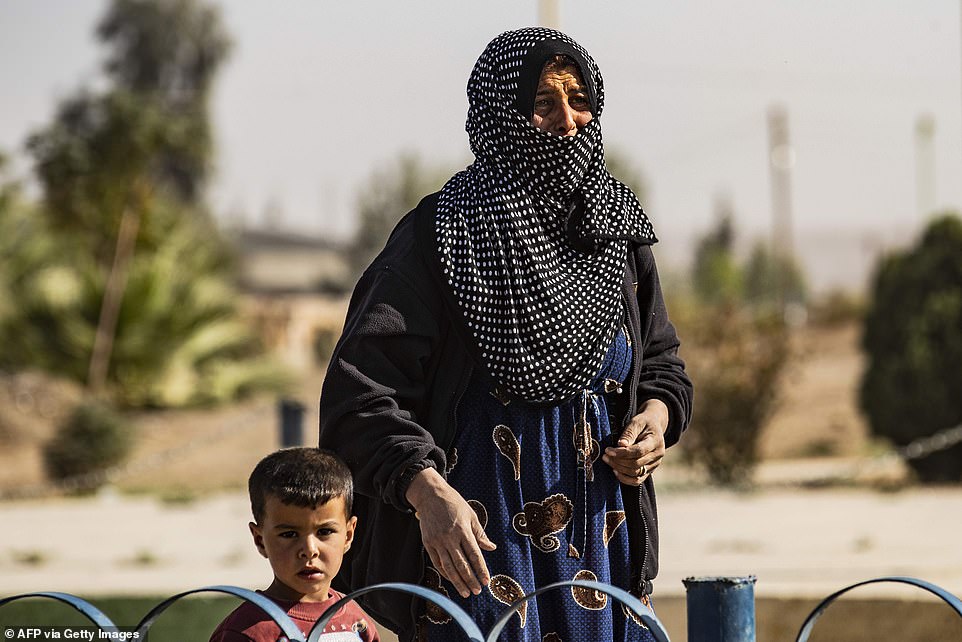 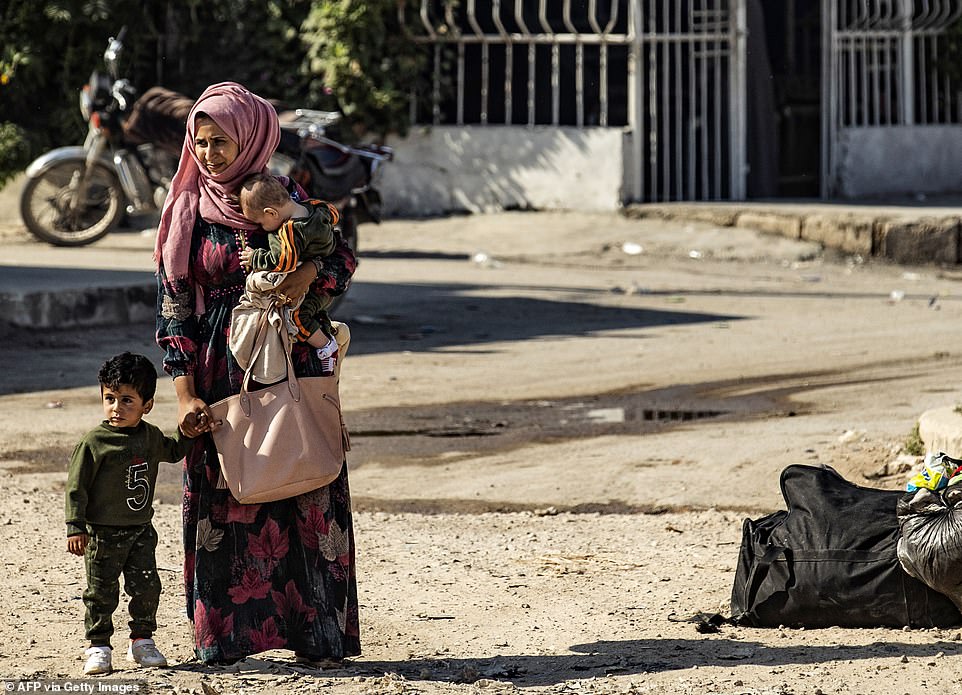 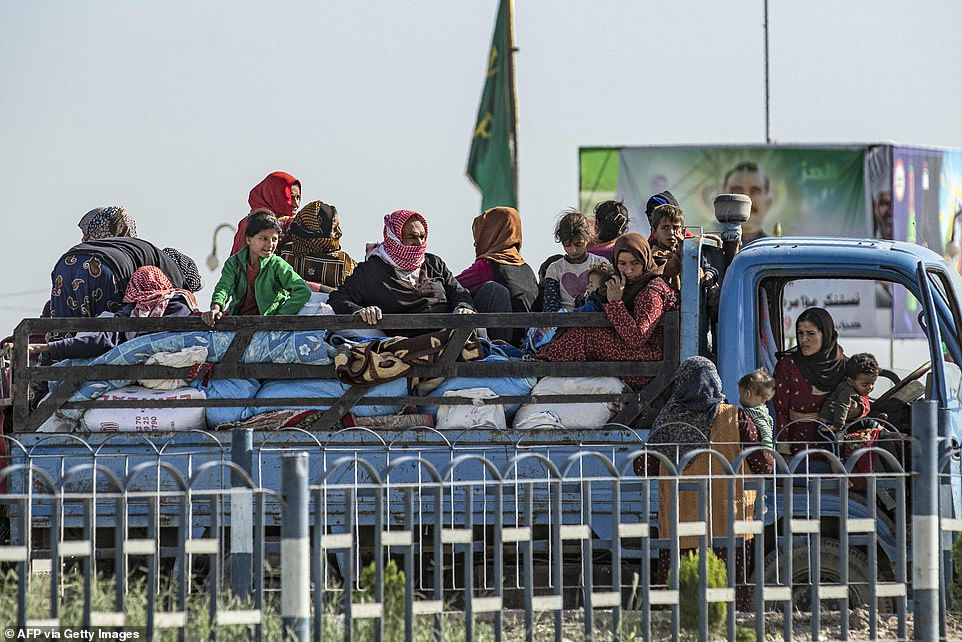 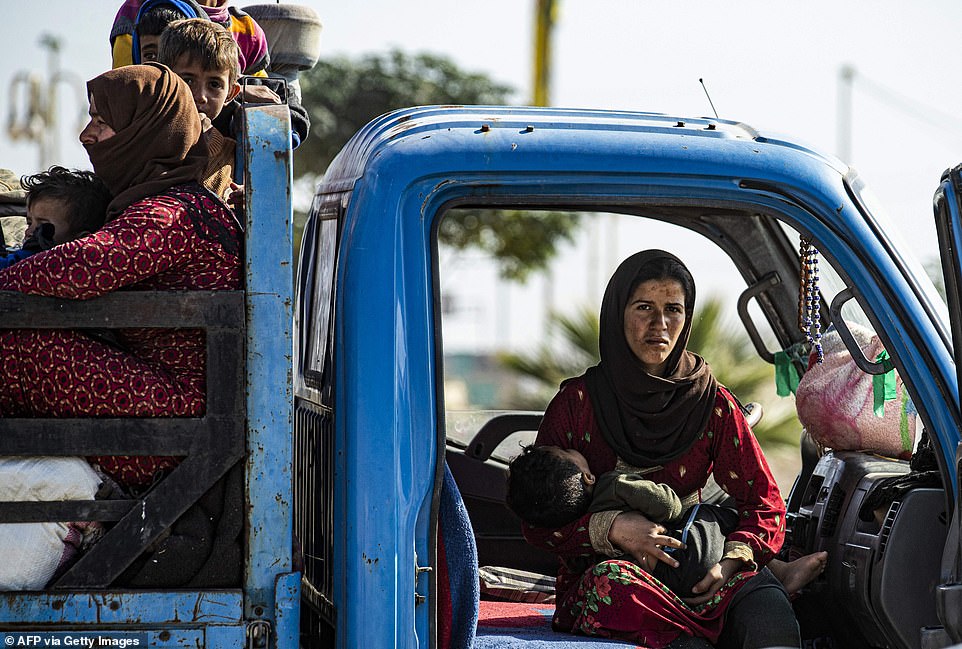 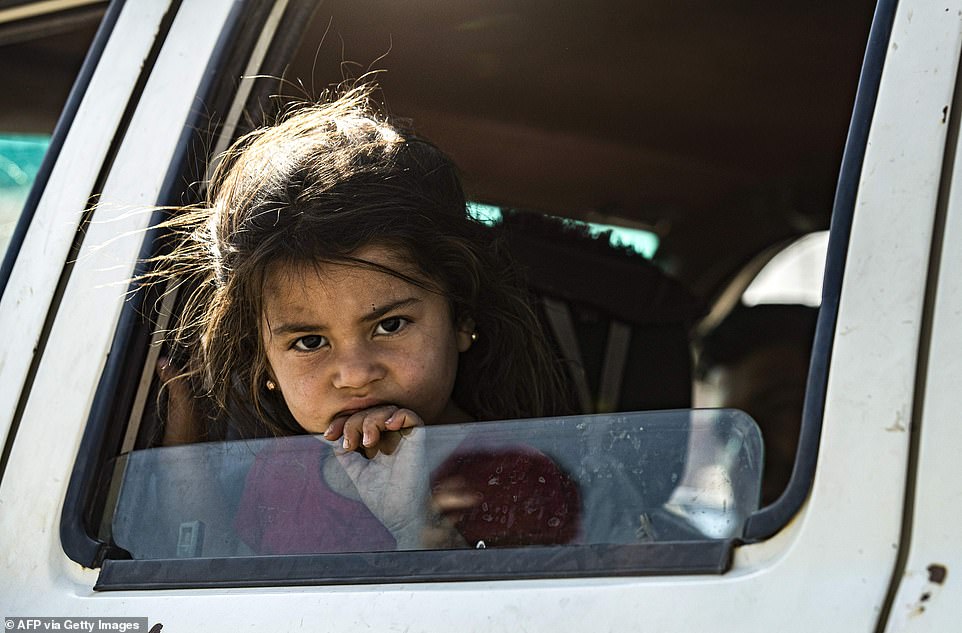 Kurdish authorities claim the Turkish assault makes it difficult to maintain security at their detention centres.

They say 800 ISIS family members escaped a camp at Ain Issa on Sunday, and five jihadists broke out of another prison on Friday.

Turkey says Kurdish forces have deliberately set free detainees ‘to fuel chaos in the area’. Some relatives of IS family members have made the same claim to AFP.

Ankara has vowed to take control of all detention centres in its operational area.

‘We are prepared to cooperate with source countries and international organizations on the rehabilitation of foreign terrorist fighters’ spouses and children,’ Erdogan wrote in the Wall Street Journal editorial.

After earlier agreeing to hand control of regional security over to Turkey, Trump phoned Erdogan on Monday to demand an immediate end to Turkey’s invasion of northern Syria.

Vice President Mike Pence said he was being dispatched ‘as quickly as possible’ to negotiate a ceasefire after Erdogan’s forces stormed into northern Syria. 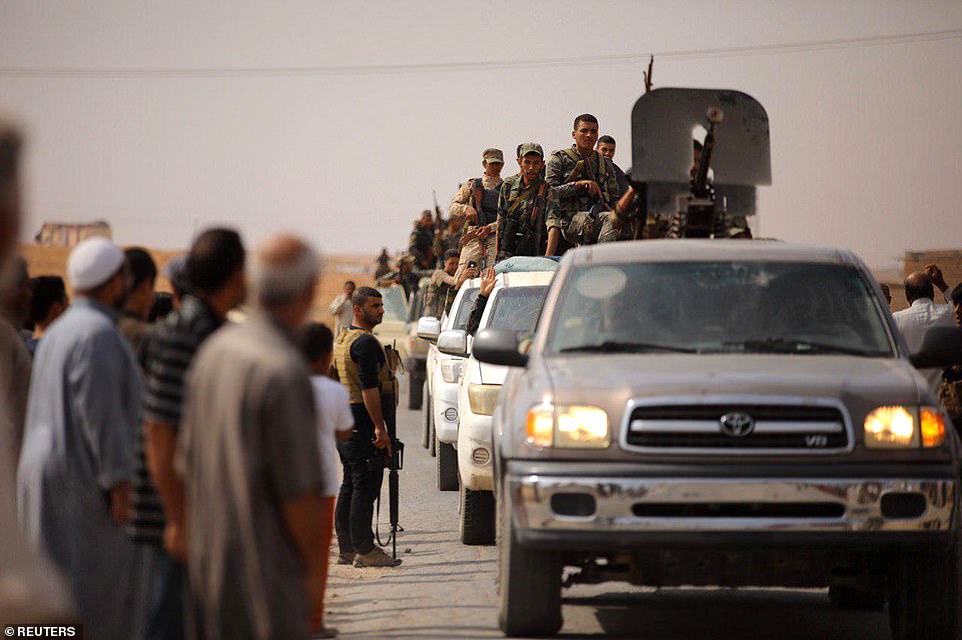 Syrian army soldiers ride in vehicles in the town of Ain Issa, close to fighting in the border city of Tel Abaid 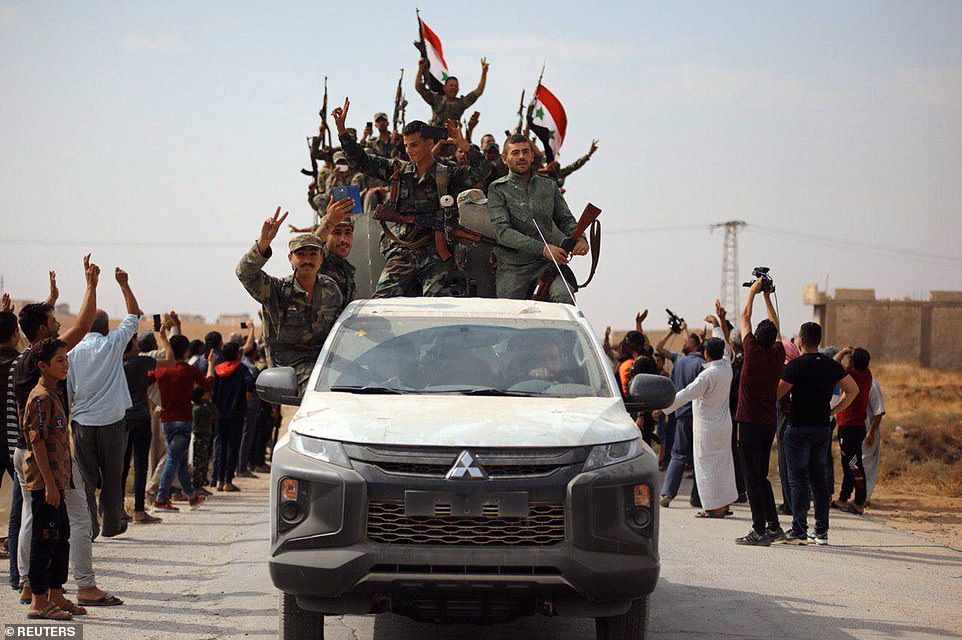 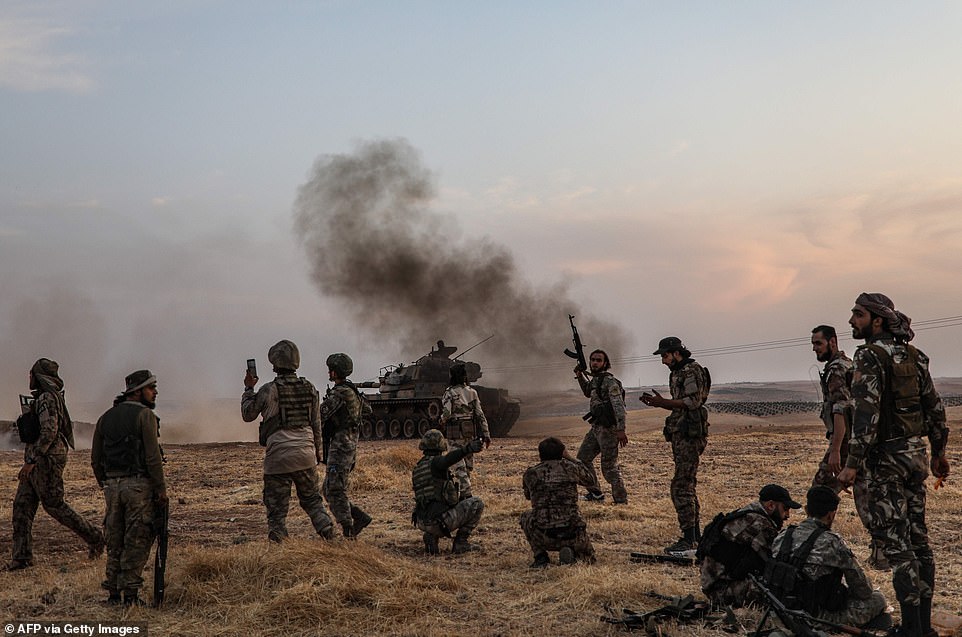 Turkish soldiers and Turkey-backed Syrian fighters gather on the northern outskirts of the Syrian city of Manbijl, ready for an attack 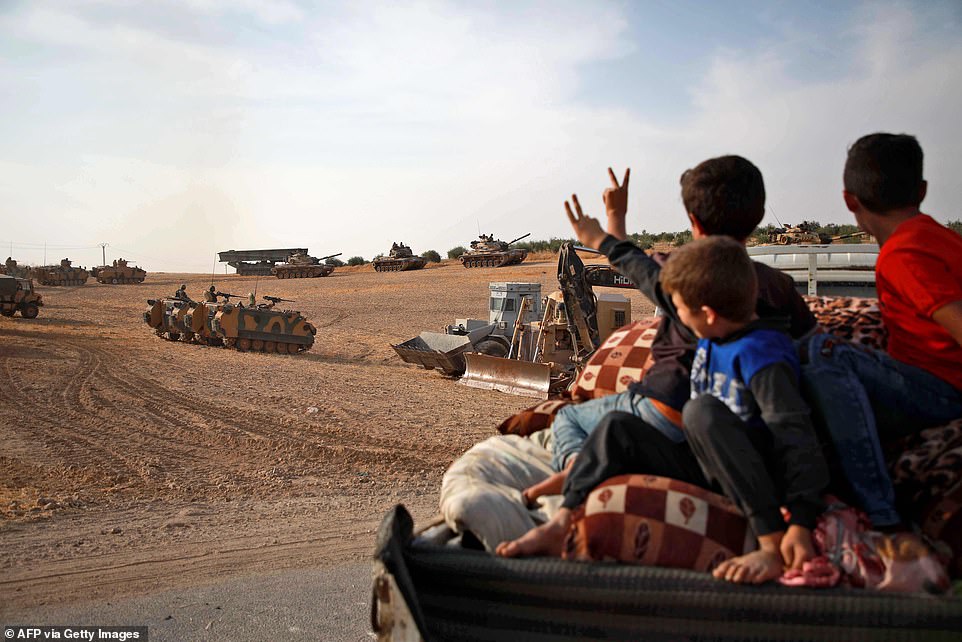 Pence said the president is ‘very concerned about instability in the region’ but denied that Trump had started it, saying he did not give Turkey the green light to launch the invasion when he announced a troop pullout.

‘The United States of America simply is not going to tolerate Turkey’s invasion in Syria any further.

‘We are calling on Turkey to stand down, end the violence and come to the negotiating table,’ Pence told reporters outside the White House.

He spoke just over two hours after Trump washed his hands publicly of the Kurds and invited ‘Russia, China, or Napoleon Bonaparte’ to save them.

Trump tweeted that he had put the fate of America’s former Kurdish allies in the hands of Syrian dictator Bashar al-Assad, whose regime he called ‘our enemy’ in the same breath.

And he announced that his administration aims to punish Turkey’s incursion into Syria by canceling a $100 billion trade agreement, hiking import tariffs on Turkish steel, and readying economic sanctions against anyone in Erdoğan’s government who threatens ‘peace, security, or stability’ in Syria. 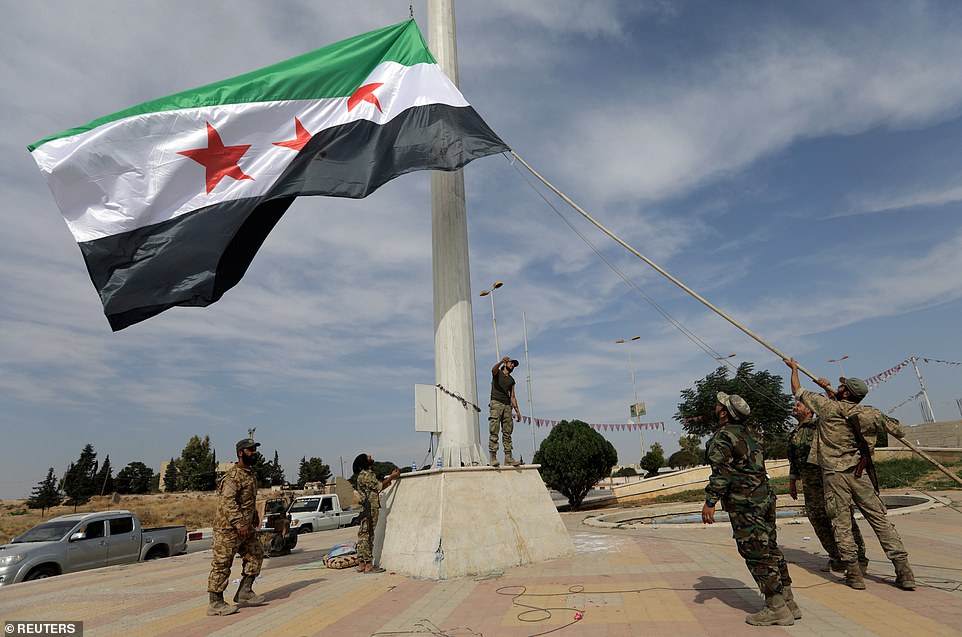 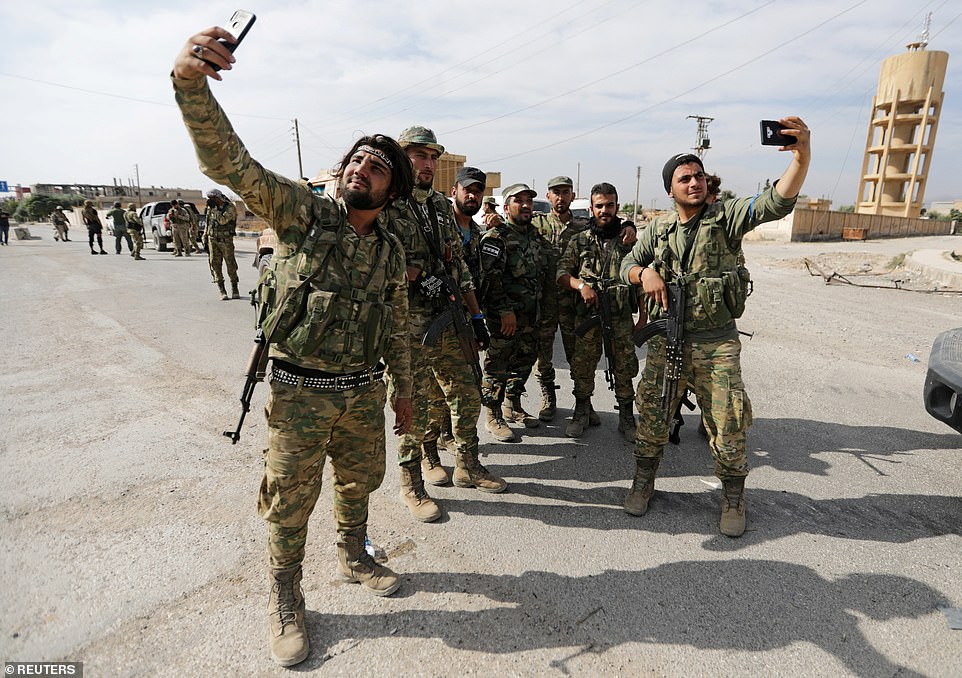 The Kurds were forced to sign a defence pact with the Russian-backed Syrian army Sunday in an effort to secure reinforcements for the fight against Turkey.

On Monday Bashar al-Assad’s forces rolled into strategic positions along the new frontline, including the battlegrounds of Ras al-Ayn, Tel Abaid and Kobane.

Syrian army units also deployed to Manbij – even as Turkey prepared to attack the city – Al Tabqah and Raqqa.

It is not clear whether any of the troops have yet been involved directly in fighting, or whether they are simply supporting Kurdish fighters.

Any conflict between Assad’s troops and Turkey would mark a turning point for the region, because Russia and Iran back the regime.

The two countries had previously allied with Turkey to create a peace plan for Syria.

It would also mark the first time the Kurds, America’s closest ally in the country, had fought alongside Russian-backed troops.