To nobody’s great surprise, up popped that gurning gargoyle Bercow yesterday to stymie, yet again, the latest attempt to get Brexit through the Commons.

In the name of ‘democratic accountability’, Mr Speaker prevented Boris Johnson‘s departure deal being put to a vote.

You couldn’t make it up.

Frankly, it doesn’t matter what excuse he fell back on this time. Bercow has bent every rule in the book to help Remainers scupper the result of the 2016 referendum.

To nobody’s great surprise, up popped that gurning gargoyle Bercow (pictured) yesterday to stymie, yet again, the latest attempt to get Brexit through the Commons

He’s like The Man From Del Monte in reverse. Readers who recall this famous TV advertising campaign from the Eighties and Nineties will know exactly what I’m getting at.

It featured a colonial fruit and vegetable buyer for a canned goods company. Kitted out in a fedora and Our Man In Havana white suit, he would be wafted to remote tropical farming districts in pursuit of the purest produce.

Nervous locals who’d spent months toiling in the fields would await the arrival of his seaplane, or chauffeur-driven limo.

A thumbs down meant financial ruin, a thumbs up prosperity. Eventually, a farmer with a Viva Zapata moustache and a dodgy, Mind Your Language accent would declare, to rapturous relief:

‘The Man From Del Monte, he say YES!’ 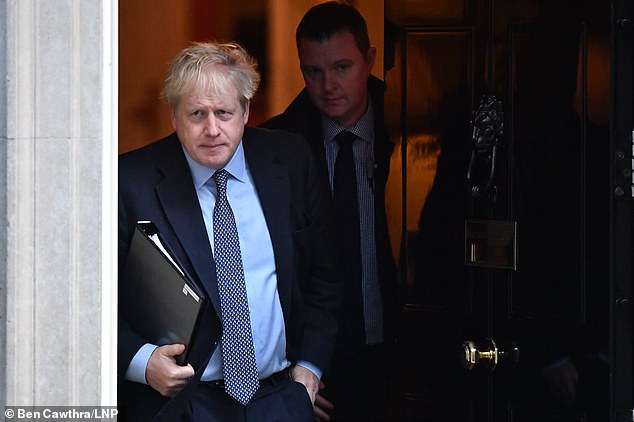 If they ever revive the campaign, Bercow would be perfect for the part.

The problem would be getting him to stick to the script. Because when it comes to Brexit, The Man From Del Monte, he always say NO! It doesn’t matter what ministers lay before the House, the Speaker takes a perverse delight in obstructing all attempts to take Britain out of the EU.

He was never going to permit Boris’s deal to be put to a vote of MPs — especially once it became apparent that the Government might just have cobbled together enough support to get it passed.

Scaling new heights of pomposity and self-justification, Bercow blew the Government’s Brexit timetable out of the water.

It’s largely irrelevant which reason he plucked out of thin air. If it hadn’t have been this one, it would have been another.

But bear with me for a moment. Bercow said that he wouldn’t allow a vote because Parliament had already voted on a similar motion and some arcane rule prevents the same question being put twice.

In which case, can we also expect him to stop MPs putting forward amendments calling for a second referendum and continued membership of the customs union — both of which have already been rejected?

What really sticks in the craw is the repeated bleating of Bercow and his fellow diehard Remainers that democratic accountability demands Brexit is subject to Parliamentary scrutiny.

This rotten, cynical Parliament has shown nothing but contempt for democracy. Having promised to respect the referendum result, the majority of MPs have strained every sinew to overturn it.

The only reason they are insisting on Parliamentary scrutiny is because that’s the best way of preventing Brexit ever happening.

I don’t want to depress you, but we could be in for another three years of this. Because of the Fixed-term Parliaments Act, there needn’t be another General Election until the summer of 2022.

Labour isn’t going to back an election it would inevitably lose. The only way an election could be triggered is if the Government is defeated in a vote of confidence.

But the Opposition refuses to move one.

I suppose Boris could always hold a vote of confidence in himself in the hope that he’d lose, thus freeing him to go to the country. But he doesn’t even have the numbers to get that through the House.

Despite agitating for a ‘People’s Vote’, a ‘confirmatory vote’, the Opposition is scared stiff of letting the people decide.

Among those demanding a People’s Vote are a couple of dozen MPs who have resigned from the Tory and Labour parties recently and either joined the Lib Dems, set up Change UK, or are sitting as independents.

Chucky Umunna is on his third party in the past few months.

Not a single one of them has had the decency to offer themselves back to their constituents in a ‘confirmatory’ by-election, even though they now represent a different political party.

So I think we can take whatever they say about a People’s Vote with a shovel of Himalayan rock salt.

To be honest, I had hoped that after I’d taken a week’s holiday, I would come back to find MPs had seen sense and embraced Boris’s deal on Saturday.

Not that I think it is worth the paper it’s written on. It’s Theresa May’s dismal, defeatist ‘deal’ on Botox — a pig in lipstick. The triumphalism we are seeing is some quarters is misplaced wishful thinking.

But it’s probably the best we can expect in the circumstances. If it gets through, we might, just might, be able to pick the bones out of it later.

Having said they didn’t want to leave without a deal, however, MPs then threw it out. Go figure.

What happens next? As I’ve written before, anyone who claims to know is a liar.

The public mood has moved beyond exasperation. I’ve never known such despair at the antics of the political class, the courts, the pro-Remain media.

Instead of action, honesty and plain speaking, all we get is self-indulgent waffle about the ‘Benn Act’, the ‘Letwin Law’, blah, blah . . .

They might as well call it the Bill And Ben Act, as the political class are all talking Flowerpot Man.

And coming up after the break, it’s Soubry Loo.

Whether there will be a backlash if and when we are eventually allowed a General Election remains to be seen. The politicians will drag this out as long as they can, in the hope that we’ll all get so bored we’ll forget about it.

And at the centre of it all struts Mr Speaker himself, a preening popinjay in love with the magnificence of his own verbosity.

He’s been described as the most powerful man in Britain, since staging a coup which empowered Parliament to neuter the Prime Minister and remove the Government’s ability to govern.

Yet Parliament has seized power without accepting responsibility. It’s what Kipling called the prerogative of the harlot through the ages.

Welcome to our very own Parliament of Whores.

But who, precisely, voted for that? To whom is Bercow accountable? Certainly not the electorate. Convention dictated that he was returned to Westminster unopposed.

In turn, he is supposed to remain unimpeachably impartial.

Yet Bercow ripped up his end of that bargain. Even his own deputy now says he is blatantly biased in favour of Remain.

And despite the fact that he was foisted on the Tories by Labour as a kind of practical joke at the end of the Brown years, the incoming Cameron government decided not to remove him.

Another triumph for Call Me Dave.

Bercow is due to retire at the end of this month. But I wouldn’t put money on it. He’s already broken his word on standing down once before.

My guess is that he won’t give up the chair until Brexit is dead and buried, even if that takes another couple of years.

All we can do is watch impotently, while Bercow and his Remainer allies trash democracy before our very eyes.