A mother-to-be has been left suffering flashbacks after the BMW 5 series her husband was driving exploded into flames as they drove down a busy A road.

Pregnant Eleanor Chapman, 21, from South Shields, endured sleepless nights and needed a trip to hospital to check her baby’s health after the car ignited – despite previously spending eight weeks in the garage for a fault to be fixed.

Dan, 24, who was driving them down the A19 near Durham, north-east England, claims BMW has refused to accept responsibility or offer compensation, and the cause of the fire remains unknown after an investigation.

It comes less than a year after the car giant announced it was recalling 268,000 vehicles, including the 5 series, because of a fault in the engine that could lead flammable coolant to leak onto the burning exhaust system.

A spokesman for BMW said they had conducted an investigation, and found that the fire ‘did not relate to a manufacturing defect or to the recall actions completed earlier in 2019’.

Pregnant Eleanor Chapman, 21, pictured with her husband Dan, 24, was left suffering flashbacks and sleepless nights after the BMW 5 series Dan was driving burst into flames on the A19 near Durham 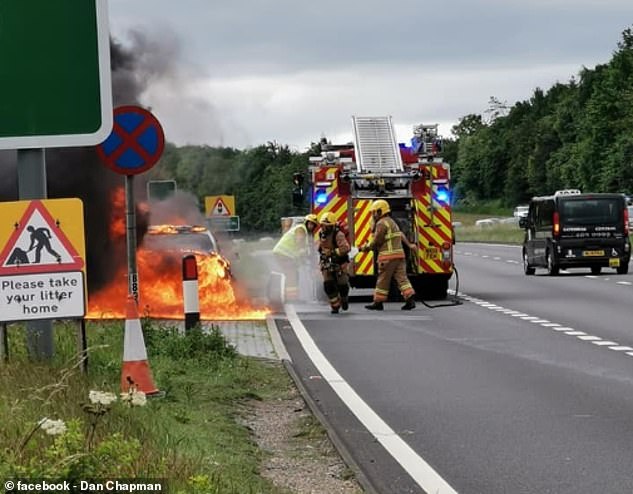 The car, pictured here engulfed in flames on the busy A19 in July this year, had been in the garage for eight weeks beforehand to have the fault that 268,000 BMW’s had been recalled for repaired

‘Since concluding this case we have been in contact with both customer and insurer to outline our findings’, they said.

‘Should more details relating to our inspection be required by either, we are happy to provide more information.’

Speaking to MailOnline, the ambulance technician said his wife was ‘in bits’ after the fire.

‘My wife was so distraught and very upset’, he explained. ‘She had to go to hospital to have the baby checked because of the fumes.’ 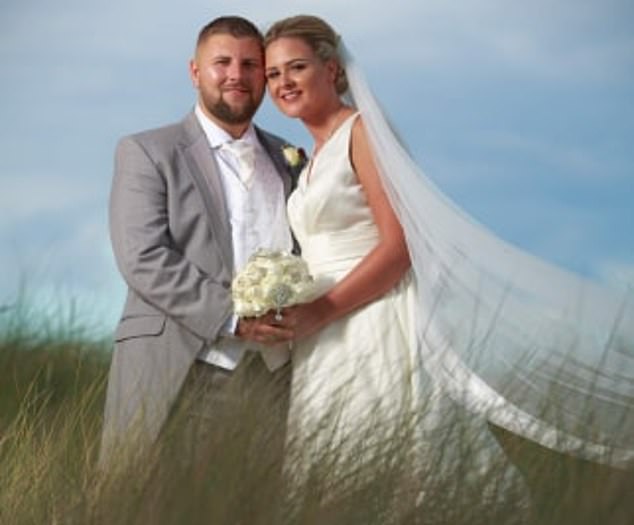 Dan Chapman, 24, pictured with Eleanor on their wedding day, said his wife was distraught and very upset by what happened, and that his first instinct was to look after the baby

‘We went through IVF and then to think it could have all been at an end when this all happened was so hard to deal with.’

The young family were driving towards Sunderland on July 5 when a light came on on the dashboard. Thirty seconds later the car lost power.

‘I looked in the rear-view mirror and there was smoke coming out’, Dan said. ‘I checked again and it was billowing out so I pulled over’.

‘This highways maintenance vehicle, it must have been about two cars behind, it pulled over and a man banged on our window and told us “Your car is on fire!”‘

‘As soon as we leapt out the whole car was engulfed in flames. Another 200 metres and that would have been it.’ 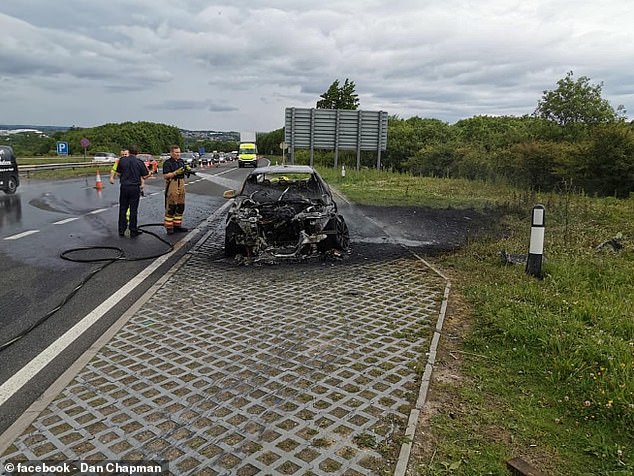 BMW have not taken responsibility for the car fire, Dan claimed, and are refusing to pay out compensation. (Pictured: The burnt out husk of the vehicle)

BMW sent a courtesy car, before stating the fire was not to do with the recall and refusing to pay compensation.

Dan’s insurance did a separate investigation and said it was ‘unable to determine the cause of the fire’, but that it had started in the engine bay on the left-hand side.

After welcoming their son Jacob to the world earlier this month, the couple now face being left without a vehicle and paying huge insurance premiums after losing their no claims bonus.

‘We’re financially snookered’, said Dan. ‘I’ve never had an accident in my life and spent eight years getting my insurance down but now I have used up my premium’. 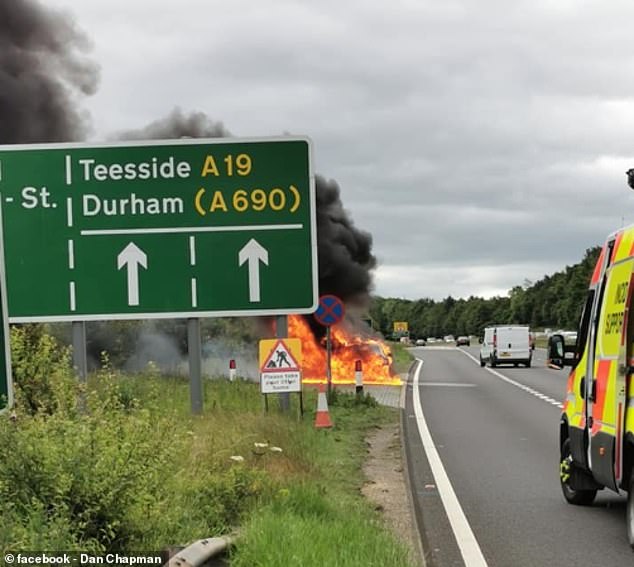 The young family also said they had been ‘financially snookered’ by the car fire on the A19 in July this year, pictured, as they have also now lost their insurance premium

Speaking about BMW he said: ‘They’re a massive company and they don’t care about me and my wife. All I want is a car or money to buy a car. Not just another car though – it’s the insurance premium that I will have to pay’.

BMW was forced to recall 12 models using four- and six-cylinder diesel engines last year after the company found that coolant, part of the emissions reduction system, could trigger a massive fire.

Those owning a 3 Series, 4 Series, 5 Series, 6 Series, X3, X4, X5 and X6 model produced between December 2014 and August 2016 were asked to return their cars to dealers immediately to have the issue repaired.

Similarly, people owning six-cylinder diesel cars made between July 2012 and June 2015 were also asked to take their cars back to dealers.

Is your BMW affected?

Models being recalled (ALL DIESEL):