Shocking moment group attack a 60-year-old ‘homeless’ man on a Brighton street as one youth threatens: ‘I will knock you out’ and a young woman throws liquid over him

By William Cole For Mailonline

Shocking video has emerged showing a group of thugs attacking an elderly man on a darkened street.

Footage shows the moment a woman pours liquid over a man, thought to be homeless, after he is attacked.

The clip was filmed at about 8.30pm on Sunday night in Brighton.

Witnesses say a group of about five people followed the 60-year-old man along Ship Street before launching the assault.

One man can be seen kicking him on the floor and shouts ‘I will knock you out, bruv’ while the victim screams in agony.

After the attack, another person can be heard to spit as a woman was filmed pouring liquid on the man, who is now slumped against a shop wall.

A witness said: ‘I was on my way to the cinema when it happened.

‘It was awful, they were following him along the road shouting at him and then they all piled on him. 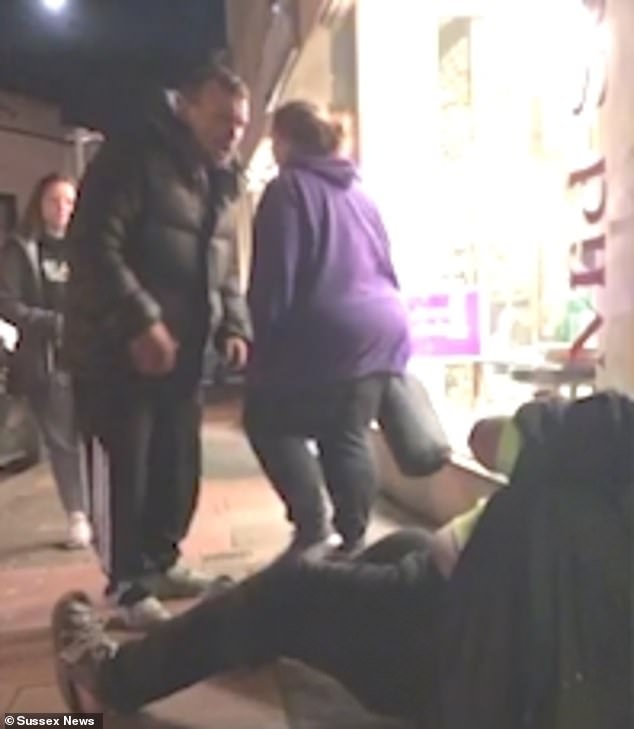 The 60-year-old, believed to be homeless, was left slumped against a wall in the attack as another man shouted ‘I’ll knock you out’ and another spat

‘People were screaming “stop, stop” but they kept going. He wasn’t even fighting back.

‘They kept shouting at him while he was on the floor.

‘It’s terrible to see this happening on our city’s streets, I really hope the poor man is OK.’

A Sussex Police spokesman said: ‘At 8.35pm on Sunday a 60-year-old man was attacked by a number of people in Duke Street, Brighton, sustaining injuries from kicking and punching. 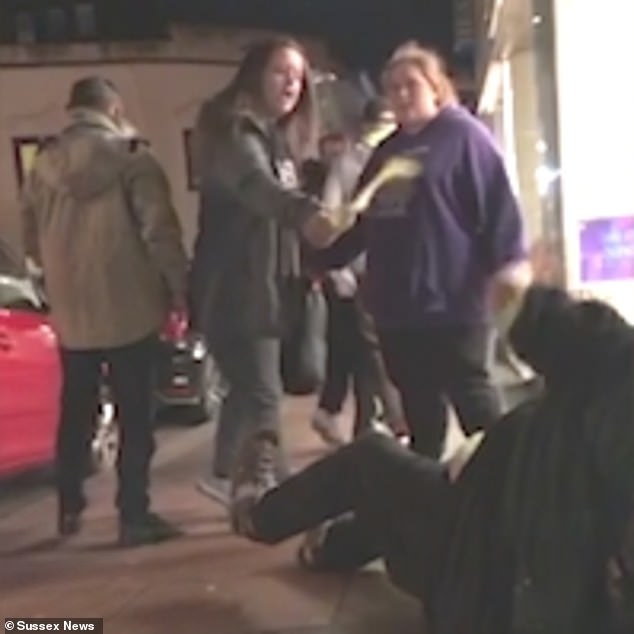 A woman was seen throwing a white liquid that looks like milk over the man before the group walk away. Sussex Police are investigating the incident

‘Video taken at the time was given to police by a passerby and enquiries are ongoing.’

The streets of Brighton have recently suffered from spates of violence, mostly against its homeless population.

Following the incident, a campaigner against homelessness has warned about violence on the street.

Jim Deans, who runs Sussex Homeless Support buses, said: ‘Worryingly, people who tuck themselves out the way and are not intruding on the public, are an easier target.

‘Violence is rife in the city, it’s absolutely every day and it’s not just men, it’s women too.

‘The most common violence you see is from the public, whether verbally or physically.

Anyone who knows who the people in the video may be should contact the police online at sussex.police.uk/contact/af/contact-us/ or by calling 101.