Sir Alex Ferguson battles neighbours over their bid to build three-storey mansion next to his £2.3m home as he blasts plans ‘in the strongest terms’ for being too big and poorly designed

By Henry Martin For Mailonline

Sir Alex, 77, has lodged an objection to the planning application

Sir Alex Ferguson is fighting to stop a ‘poorly designed’ three-storey mansion being built next to his £2.3 million home.

The former Manchester United manager has objected ‘in the strongest terms’ to plans for the new property in Wilmslow, Cheshire, which he claims is too big and poorly designed.

Sir Alex, 77, who lives next door with his wife Cathy, has lodged an objection to the planning application which says the property would be too near to his land and out of keeping with others on the street.

Peter and Josephine Wilson submitted proposals to demolish their existing two storey home and replace it with a larger property. The couple are selling their house and interested parties have indicated they want permission for the plans before making the purchase.

The proposal is for a six bedroom, 10,000sqft home to replace the current five bedroom, 3,500sqft one.

A statement submitted by Ferguson’s solicitors to Cheshire East Council states: ‘Our client objects in the strongest terms to the grant of planning permission.

‘The proposed scale of the new dwelling house and, in particular, the addition of a third storey is inappropriate and out of keeping with the prevailing scale and pattern of development in the locality.

‘The proposed development would entail a significant reduction in the established separation distance between the dwelling house on the site and the side boundaries of the plot, to as little as one metre.

Peter and Josephine Wilson submitted proposals to demolish their existing two storey home and replace it with a larger property (pictured: A design of a possible 10,000 sq ft property)

‘This is out of keeping with the prevailing layout of plots in the area which feature more generous separation distances of four to thirty metres.

‘This generous separation distance and the open space to the sides of the buildings is a key element of the character of this designated low density housing area.’

Ferguson’s representation also pointed out the street is prone to surface water flooding during construction projects. 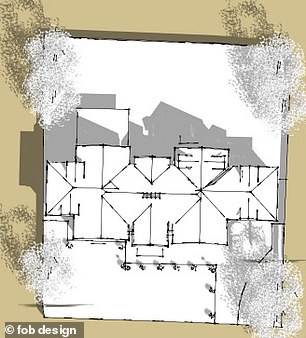 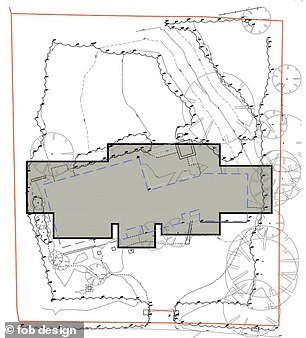 In a submission to the council, the Wilsons’ planning agents said it was ‘common’ for new build replacement dwellings to be constructed in the area (pictured: Overhead drawing of the new house design)

In a submission to the council, the Wilsons’ planning agents said it was ‘common’ for new build replacement dwellings to be constructed in the area.

They added: ‘The owners are selling their house. There has been interest in the property with regards to demolishing the existing property and rebuilding a larger dwelling

‘Sizes of around 10,000sqft (929m2) are the median size discussed by interested parties

‘These parties require the security of knowing that a larger dwelling of this size will have planning permission.’

Planning officials at the local authority are due to make a decision on the application in due course.

Glasgow-born Ferguson retired from the Old Trafford hot seat in May, 2013, after 27 years at the helm.

He had emergency treatment on a brain haemorrhage in May, 2018, and spent several days in intensive care at Salford Royal Hospital, near Manchester.

Earlier this year he raised £400,000 for the NHS as a thank you for the care he received during his health scare.