Konika Dhar, 32, pictured outside Camberwell Green Magistrates Court today, is the sister of Siddartha Dhar, 35, who fled the UK with his wife and four children to join ISIS, and featured in ‘My Son the Jihadi’

The sister of notorious ISIS executioner ‘Jihadi Sid’ has been handed a restraining order after she developed an obsession with a journalist, a court heard today.

Konika Dhar, 32, of Palmers Green, Enfield, is the sister of Siddartha Dhar, 35, who fled the UK with his wife and four children to join ISIS, and featured in ‘My Son the Jihadi.’

She sent heart emojis to Sunday Times Security Correspondent Richard Kerbaj after he interviewed her while making documentaries about the families of Islamic terrorists.

She harassed Mr Kerbaj and his ex-girlfriend Katie Gibbons who is a reporter at The Times.

Today, she told Camberwell Green Magistrates Court she chased Mr Kerbaj because it had been foretold to her by an imaginary black-clad seven foot-tall Nepalese woman.

She was sentenced to a 12-month community order, which includes 25 days of rehab and must pay £200 costs and an £85 victim surcharge.

Dhar was also made subject to an indefinite restraining order prohibiting any contact with the two victims, their friends, families and work colleagues and Mr. Kerbaj’s new girlfriend and was banned from going within 200m of The Times’ London Bridge HQ.

Dhar pleaded guilty that between January 1, 2016 and April 4, this year she harassed Mr. Kerbaj with online threats.

She also pleaded guilty that between August 1, 2016 and April 4 she harassed Ms Gibbons with online threats.

Mr. Kerbaj first met her in May, 2015 to make his documentary and there were no issues.

‘In mid-2016 her behaviour changed and she began sending him heart emoji’s and inappropriate messages and he told her they were inappropriate and asked her to stop,’ explained Mr. Curtis.

Dhar trawled social media to discover Mr. Kerbaj had dated Ms Gibbons. ‘She became obsessed about this and contacted Katie Gibbons and her family. 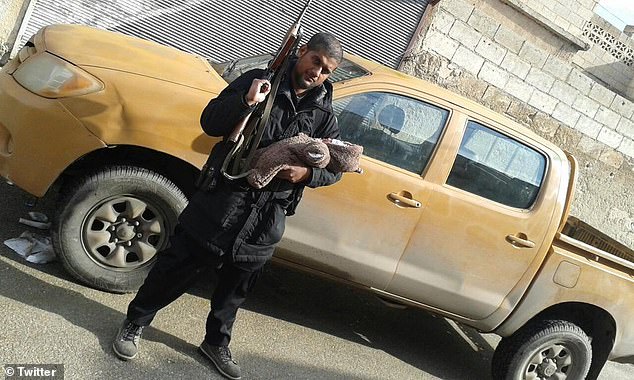 Dhar received a police harassment warning for her behaviour, but despite this she continued, only avoiding further actions because she was out of the country and the complaint was over the time limit.

However, she resumed her campaign in December, 2018. ‘It started up again and she sent WhatsApp messages to Mr. Kerbaj,’ explained the prosecutor.

‘She sent at least seven emails to The Times about Richard and Katie’s relationship and tried to get work at The Times with stories about herself.’

She also messaged Mr. Kerbaj’s father and mentioned the journalist’s new girlfriend, writing: ‘Your son belongs with me, not Marine.’

On April 2 this year she visited The Times HQ in person.

The Sunday Times successfully applied for a High Court restraining order against Dhar, prohibiting contact with the two complainants and their friends and family and going within 200 metres of their Southwark HQ.

Dhar was questioned by the police. ‘She said she was having a psychotic episode and that was the reason for her behaviour.’

In his victim impact statement Mr. Kerbaj says: ‘She was not threatening, but was very unnerving and much of it didn’t make sense.

‘I don’t know what Konika is capable of, but she seems erratic in her behaviour. She visited my place of work and contacted my ex-girlfriend.’

Ms Gibbons says: ‘I have never met, spoke or responded to Konika Dhar. It has been relentless on me, my family and my career.

‘I think she has become fixated on Richard. It doesn’t make sense that someone I don’t know has so much hate for me. I have had to change my work hours, it has taken it’s toll.’

Probation Officer Patrick Acres told the court: ‘Quite clearly Ms Dhar, at the time of committing these offences, was not well.

‘The diagnosis is schizophrenia and these symptoms were present before the diagnosis.

‘She first engaged with mental health services in 2016, but rejected the diagnosis due to the stigma and didn’t feel it matched her self-image.’

Dhar now receives 4 anti-psychotic injections a week. ‘She feels that has completely changed her way of thinking and she recognises her actions were obsessive.

‘Now she is able to think straight she has no intention of contacting these people again.

‘If she had been well she probably wouldn’t have behaved in this way.

‘She has had a lot of pressure with the high-profile case of her brother and the press were hounding her, they were on her doorstep daily.

‘She met the complainant when he was trying to get the views of the family and got involved because she was told she would be put in contact with other families. That was her motivation.’

Dhar, who is due to begin a Masters Degree in Company Law in January claimed she just wants to put it all behind her.

Mr. Jon Ross, defending, told the court: ‘First I’d acknowledge this is a serious offence and highly unpleasant and and no-doubt highly distressing to Mr. Kerbaj and Ms Gibbons and will have a lasting effect on them.

‘She is very remorseful and deeply ashamed at the way she behaved. She finds it very difficult to sit there and listen to these messages.

‘She does not recognise the person who sent these messages. Her offending took place at a time she was suffering serious delusional behaviour.’

A psychiatrist report reveals Dhar’s belief the seven foot-tall woman was communicating with her telepathically and foretold of the relationship with Mr. Kerbaj.

She believed they were a couple ‘meant to be’ and was in the grip of ‘bizarre delusional beliefs.’

Dhar also believed she had been or was in danger of being abducted by aliens and that a ghost was haunting her home.

‘The greatest punishment will not be the court’s punishment, but the loss of her good character. She is a very proud woman and this loss of character will be a real damaging blow to her,’ added Mr. Ross.

Dhar appeared before the Commons Home Affairs Committee in January, 2016 to answer questions about her brother’s appearance in an ISIS propaganda video showed ‘British spies’ being executed.

Her brother, a former bouncy castle salesman converted from Hinduism to Islam and changed his name to Abu Rumaysah an is now on the US State Department’s global terror list.