By Tracy You For Mailonline

Six people have been killed and 10 remain missing after a bus carrying passengers on a stretch of busy street was swallowed by a sinkhole in the rush hour yesterday evening in a Chinese city, the local authority has said.

Another 16 people were injured in the accident and were treated in hospitals in Xining, western China’s Qinghai Province, the government announced.

The collapse left an 80-square-metre (860-square-foot) pit in the street outside a hospital. Rescuers are still looking for survivors.

Rescuers are seen preparing to lift a bus out of a sinkhole after a stretch of busy road collapsed in China. Six people have been killed and 10 remain missing after the vehicle was swallowed 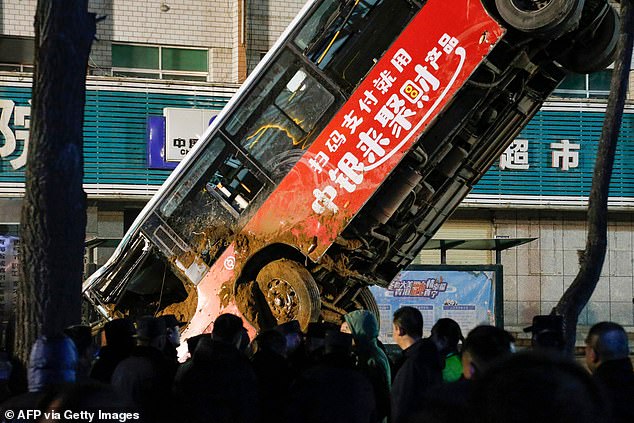 Bystanders are seen watching as the bus is lifted out of the 860-square-foot pit in Xining. Another 16 people were injured and were treated in hospitals in the provincial capital

In a press conference this morning, the city’s officials said more than 1,000 police and firefighting officers were involved in the rescue efforts, and more than 30 vehicles had been dispatched to the scene to assist the operation.

As of 9:30am local time today – around 16 hours after the accident took place – rescuers had found six bodies and were verifying their identities.

The authority said it was investigating the cause of the accident. 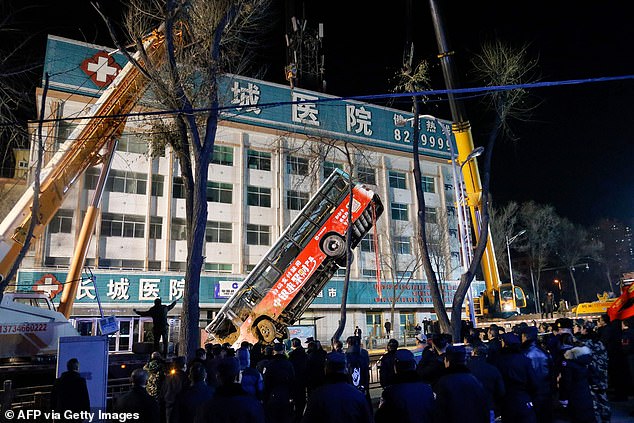 The authority said more than 1,000 police and firefighting officers were involved in the rescue efforts, and more than 30 vehicles had been dispatched to the scene to assist the operation 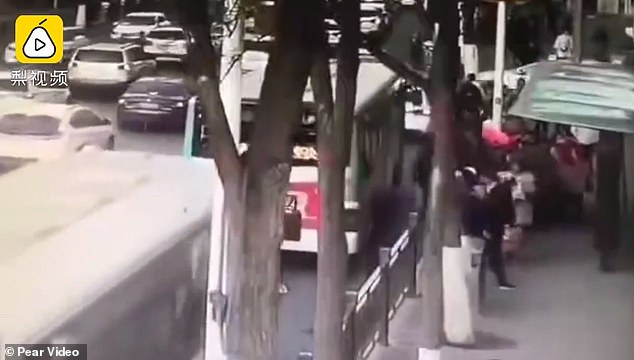 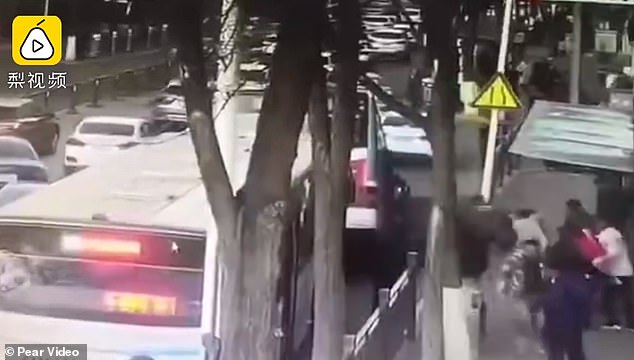 The vehicle in China then plunges into a sinkhole, sending onlookers fleeing for their lives

The accident took place at around 5:30pm local time in front of a bus stop on the South Avenue in the Chengzhong District, the Xining government said in a press conference yesterday.

Footage released by Chinese media showed the bus plunging into the ground as the road underneath it suddenly gave way.

It also captured a nearby utility post being brought down by the collapse and residents fleeing for their lives.

A separate clip purported to show the vehicle exploding in the sinkhole in front of screaming onlookers, but the authority did not commented on the suspected blast.

The sinkhole opened up when the No. 17 bus was waiting for passengers to board. 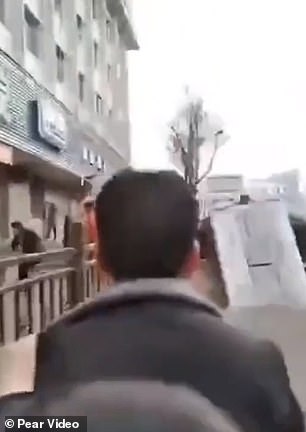 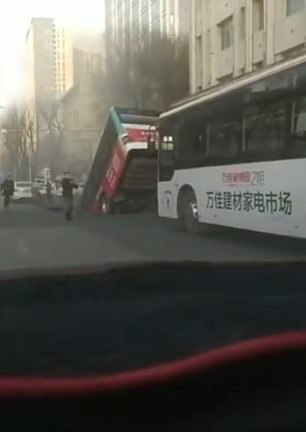 Footage released by media also purports to show the vehicle exploding in the sinkhole in front of screaming onlookers, but the authority has not commented on the suspected blast

Eyewitnesses claimed to see passengers and passersby plunging into the cavity, but the government did not react to the allegations.

Journalists from China News reported to see shattered glass, wires and a suspected broken water pipe in the sinkhole.

Xining has a population of around 2.4 million and is the capital of Qinghai Province in western China. 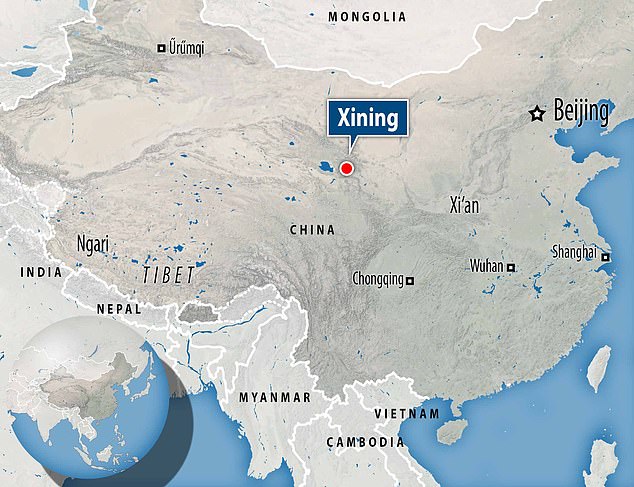 The incident took place in Xining, the capital of Qinghai Province in western China

The city’s government said that the province’s governor as well as the city’s Mayor and Communist Party Secretary arrived at the scene immediately to deal with the aftermath.

The accident occurred just a month after a huge sinkhole opened up in the middle of a thoroughfare in another major Chinese city, Guangzhou, killing three people.

The sinkhole measured as deep as 38 metres (124 feet) and swallowed a cleaning truck and a bike, reported state media.

Local Guangzhou authority said the accident was caused by the construction of a subway line.