Stan Collymore has accused Good Morning Britain of ‘institutional racism’ after producers invited him on the show to discuss Bulgaria fans’ abuse of England players.

The former England footballer was asked to appear on the ITV show today in the wake of last night’s match, which saw far-right Bulgarian fans perform Nazi salutes and hurl racist abuse at Raheem Sterling and Tyrone Mings.

But Collymore declined the offer, claiming he’d been asked on the show as ‘the token black’.

He posted his response on social media last night, sparking a heated Twitter debate and a furious backlash from GMB host Piers Morgan, who told him to ‘get a grip.’

Former England footballer Stan Collymore declined the offer to appear on GMB, claiming he’d been asked on the show as ‘the token black’ 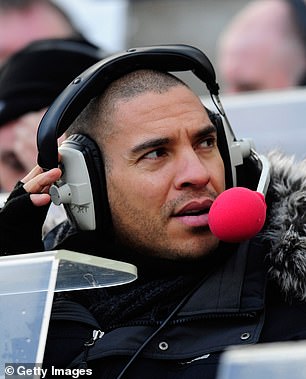 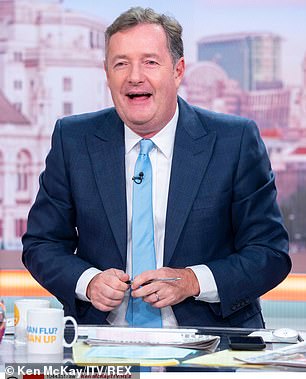 Collymore sparked furious backlash from GMB host Piers Morgan, who told him to ‘get a grip’ 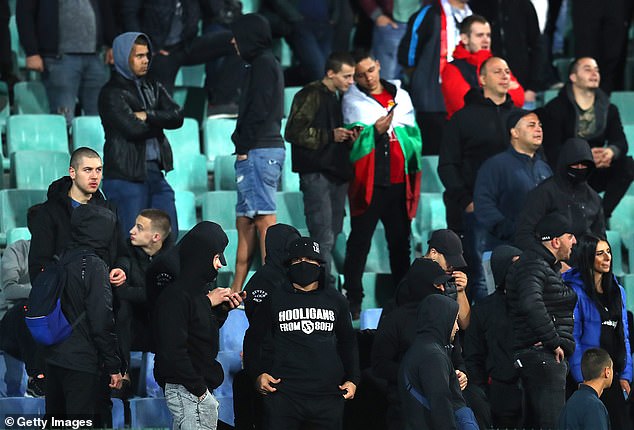 In England’s 6-0 qualifying victory in Bulgaria on Monday evening, monkey noises aimed at England defender Tyrone Mings and forward Raheem Sterling could clearly heard in the stadium, twice bringing the game to a halt.

The game was halted twice as home fans abused black players, brandished ‘No Respect’ shirts and made Nazi salutes in a planned racist onslaught.

Collymore was subsequently asked to appear on TV this morning to discuss racism in the game.

He took to Twitter to post the email from GMB producers, which read: ‘To whom it may concern: I am a Producer at Good Morning Britain.

‘We were wondering whether Stan Collymore would be available for tomorrow’s show to discuss the developing Bulgaria vs. England match? Feel free to give me a call.’

Sharing it with his 880,000 followers he said: ‘Institutional racism for you.

‘No thanks @GMB, my race isn’t a 2 min bit before you give someone from Geordie Shore an hour to show you their new nails.’

But his response prompted a debate among fans, with some backing him and others urging him to use his platform to discuss the racist abuse.

Piers later hit back, tweeting: ‘Sorry? We’re racist for asking you to comment about racism at a football match, an issue you’ve spoken about so many times? 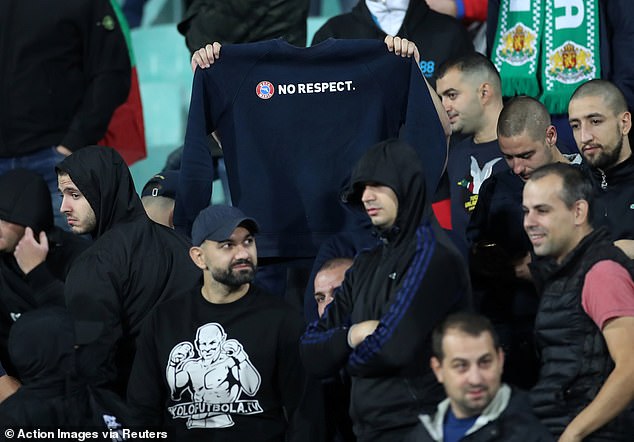 A fan holds up a No Respect jumper, a reference to UEFA’s Respect campaign which encourages equality in football 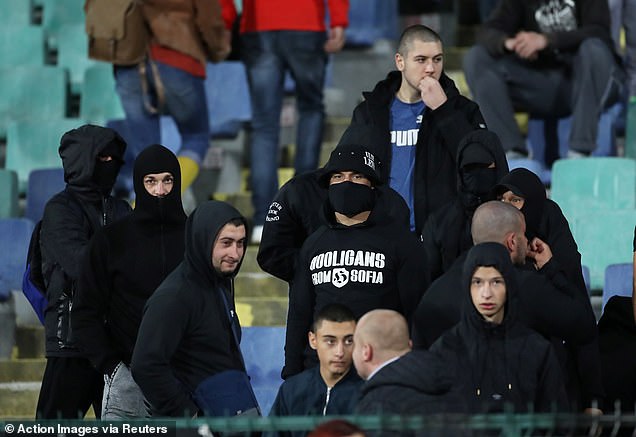 Fans in black wore clothes which had ‘ultras’ and ‘hooligans’ printed on them, before a mass walk-out before half-time 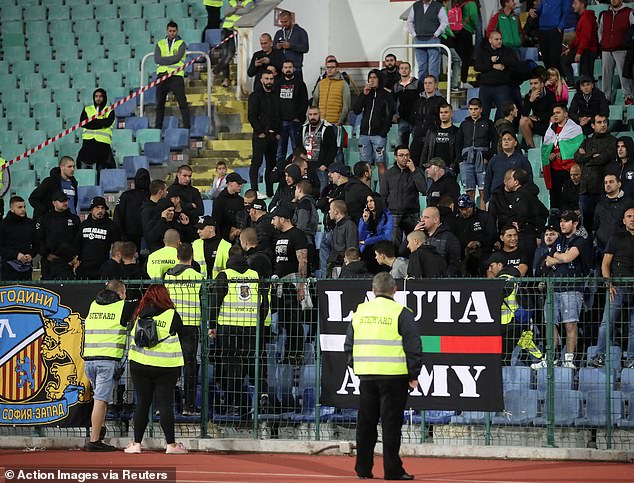 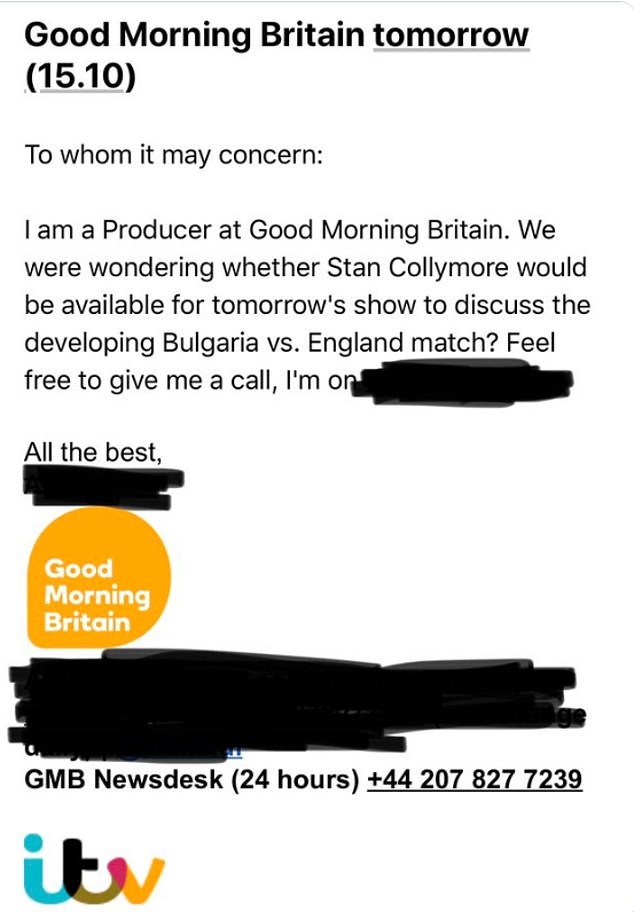 The pair came to blows in May 2017, when the former striker took Piers to task over his ‘man up’ comments on mental illness.

Piers had caused a stir on social media after he tweeted: ‘I’m not convinced by this new trend of male public soul-bearing. Time for our gender to get a grip, methinks. Life’s tough-man up.’

Collymore had opened up about his battle with depression, and revealed he was told by a manger during his time at Aston Villa in 1999 that fans wouldn’t sympathise with his illness.

Collymore said at the time: ‘The man up comments from Piers the other day… If I was on the football pitch and I had a compound fracture in my bone, you wouldn’t be able to man up and run it off. It’s exactly the same approach.’

But Piers said he ‘didn’t like the way having a stiff upper lip has been offensive.’

The hooded group of racist thugs, who marred Monday night’s victory for England in Bulgaria, identify as the Lauta army.

Members of the group directed vile racist abuse towards England’s black players and were also seen making the Nazi salute during the Euro 2020 qualifier.

The hooligan organisation are heavily linked to football team Lokomotiv Plovdiv, who compete in Bulgaria’s top-flight.

Plovdiv’s stadium is situated in the Lauta park, hence the name of the gang.

The Lauta army have been involved in organised violence for over 25 years and are known to wear all black during fights with rival gangs and football fans.

There are several videos on YouTube of the Lauta army clashing with supporters of Lokomotiv Plovdiv’s fierce rivals Botev – one of which shows them chasing the Botev fans down the motorway and making them surrender after they refused to meet for an organised fight.

Extreme violence has become a staple of the Plovdiv derby. In 2009, players and coaches from both teams started fighting after the final whistle while fans invaded the pitch, throwing bottles and smoke bombs.

Fights involving the Lauta army at Lokomotiv games has resulted in the club being fined and forced to play behind closed doors on numerous occasions in the past.

The Lauta army often cause trouble on Lokomotiv game days, and have previously attacked police and rival fans with bats and tried to storm into away sectors.